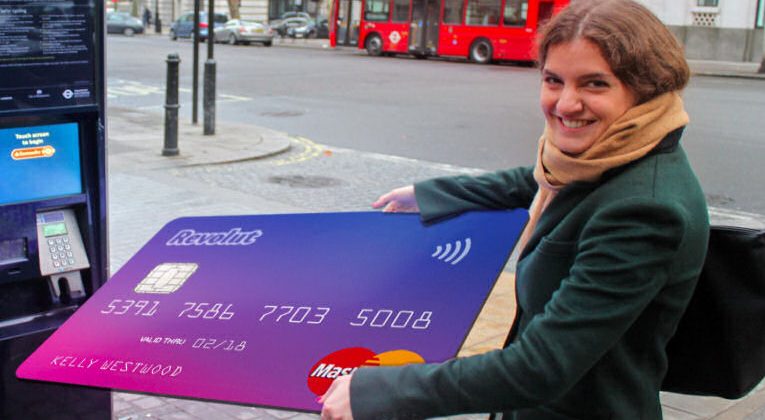 Over the last 18 months, there has been an absolute surge in “fintech” (Financial Technology) startup companies. Hardly a month goes by now without an app-bank or app credit-card being launched.

One of the ones to hit the market about 18 months ago is Revolut. Sign-up to Revolut, and you get a physical Mastercard and an associated app. You need a smartphone to get Revolut, as the app is crucial to the functionality.

Revolut works on the basis that you pre-load your revolut account use the app. You can load from any debit card for free, or from a credit card at 1%. This is a different approach to many other startups, which work by linking their card to an underlying debit or credit card.

The associated app has 3 different currency wallets, Sterling, US Dollar and Euro. It allows you to move your money dynamically between these currencies, showing you a realtime exchange rate.

The above is fine if you are in a Euro or USD country, however it’s another aspect of Revolut I wanted to exam. They claim that they give you the spot (interbank) exchange rate for all currencies, with the exception of some “soft currencies” (Think Rubles). Traditional credits cards charge a foreign exchange commission that is typically 2.5-3%. Even most bank debit cards will charge a commission.

I wanted to test this claim that it would give me the spot rate with no commission on foreign currency transactions. As it happens, I was in Bulgaria last month. Although it’s a member of the EU, it doesn’t use the Euro, but the Lev (Plural Leva). I loaded up my Revolut account with some Sterling, and headed to the nearest ATM. The test would be to draw 100 Leva using the Revolut card and then immediately do the same using my bank debit card.

First the Revolut. Amazingly, whilst I could still hear the ATM internally counting the notes, I received an in-app message advising me of the details of the withdrawal. 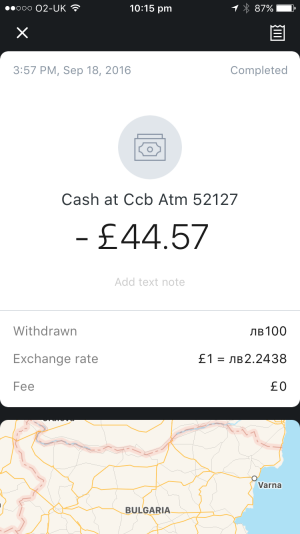 For 100Leva, Revolut had charged me £44.57. It even displayed a basic map showing approximately where I was at the time of the withdrawal !

Next my debit card. Like most banks, my bank doesn’t provide instant messages for transactions.  So I had no idea at the time how much I’d been charged. My online bank statement shows me:-

My initial thought on seeing this was that the debit card had put in a good performance. It’s exchange rate was actually a little better that Revolut. I felt the £1.25 flat fee was good. For bigger transactions, that flat fee would be minimal.

However, if you examine the above, you’ll see the date is two days later than the revolut in-app message. The bank had assigned the transaction to a different date, and used the exchange rate on that date. I suspect the rate moved slightly in my favour in those two days, which explains why the bank’s rate was better.

More importantly, after reading the T&C of my bank card, it became clear that the fee was actually a % commission. The bank had actually charged me 2.8% commission. The nice round figure of £1.25 had fooled me into thinking it was a flat fee.

The Revolut card gave me a slightly worse exchange rate than my bank, by about 0.5%. However that difference is likely to do with the bank deferring the conversion by two days. But even taking that into account, the Revolut card saved me around 2.3% compared to my bank card.

I can’t categorically say I received the spot interbank rate for using Revolut, but it appears likely.

It is worth noting that there are several debit cards on the market that do not charge a separate commission. I don’t know whether such cards apply a hidden commision by using a poorer exchange rate.

I also have a Curve card, and I wanted to do the same experiment with that. However the atm informed me it wasn’t compatible with that card, which was disappointing. When I contacted Curve about this, they said that the ATM had to support chip and pin, and pointed me to a website showing where there are compatible ATMs. I have to assume the website was out of date, as it indicate that there isn’t a single compatible ATM in Bulgaria.