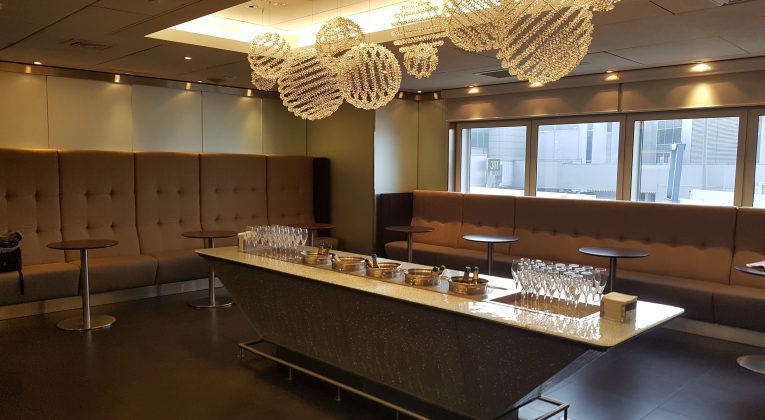 As soon as I’d put the phone down after amending a BA redemption to First Class for the outward leg to Las Vegas, I had around 5 minutes of excitement dreaming about visiting the much lauded/criticised BA Concorde Room and wondering about all the luxurious possibilities…

Then I remembered flights to Las Vegas from Heathrow operate out of Terminal 3.

Oh well, Galleries First T3 would have to do… #First(class)WorldProblems. Here’s my experience:

In Terminal 3, the BA Galleries lounge complex is located just past the shopping area after security, in Zone F before the gates start.

Heading all the way up the corridor will bring you to a “British Airways” door, which opens out into the area pictured above. The Elemis spa is in the white section in the middle, with the Club lounge straight ahead, and the First Class lounge to the left (not pictured).

Access to Galleries First is available to ticketed First Class passengers, and BA Gold/OneWorld Emerald members regardless of ticketed class.

After presenting our boarding cards to the lounge agent, the first area that guests walk into is the Champagne Bar.

Personally, I could have just stopped here!

Two types of perfectly drinkable, self-pour Henriot champagne (standard and rosé) were on offer though not Laurent-Perrier Grand Siècle unfortunately – I’d have to wait until the plane for that

From the champagne bar, the lounge extends both left and right.

Turning left, there are a selection of magazines and newspapers on each wall of the “corridor” space.

The space then opened up into the main bar area and business/entertainment centre.

In the centre of the room was another long bar with beautiful chandeliers, with a selection of self-pour premium vodkas, including Grey Goose, and various tonics and juices.

Across the back wall were the soft drink and beer refrigerators, and other spirits, with a fair selection. However, a point I feel I must make, is the gin selection is awful. I don’t drink whiskey or brandy so can’t comment on the range provided, but as a Gin Drinker, to only have Gordon’s or Bombay Sapphire in a First class lounge is almost unforgivable. Even Wetherspoons serves Hendricks!!!

On the left hand wall as you enter is the “Business/Entertainment” zone, with numerous screens with headphones for you to use to watch films, check your emails. There were two multi-function printer/copiers, and some desk spaces for you to use your own laptop. These were occupied at the time so I couldn’t photograph them.

WiFi speed in the lounge was more than acceptable, although I also had 4G reception so didn’t really need it.

Behind the Business Zone are one of the sets of toilets. Each is an individual room, and showers are also available although I didn’t use them as I had already showered at the hotel. There didn’t seem to be much of a wait as I did see two or three other passengers use the showers during the couple of hours we were in the lounge.

The toilet facilities themselves were fine, but utilitarian and a bit “tired”.

There could be a little bit of a wait as there are only around 4 male and 4 female toilets at each end of the lounge, which seemed a little low as the lounge began to fill up.

There are also rather large warning signs about sharps disposal, and a sharps box. I’ve never seen this in a toilet before, and definitely wasn’t expecting it in an airport as I would hope that any sharps like cutthroat razors and scalpels wouldn’t have made it through security!! I assume they’ve had problems with unscrupulous diabetics disposing of their needles in the rubbish perhaps??

They were stocked with Elemis soap and hand lotion, but that’s it. There is a shaver power point above the sink if you need it.

There is also a full length mirror next to the door:

Back in the main lounge, we headed to the “right side” to see what food options were available.

Just past the Champagne Bar, there is a separate Kids Zone room, with the kind of toys you might find in a doctor’s waiting room, a PS4 stand and a TV showing kid’s TV.

Opposite this – and maybe intentionally for worn out parents travelling with children requiring copious amounts of caffeine, was a Tea and Coffee bar (which I seem to have neglected to photograph), with a wide selection of Twining’s tea, a posh coffee machine and various biscuits/snacks on offer.

Past the kid’s area, the lounge opened out into a casual seating/dining area, with a self-pour wine bar on the left hand side:

And the buffet area on the right. As we were there in the morning, it was breakfast that was on offer. The buffet had a variety of pastries, cereal, porridge, and a small hot buffet, with a soft drinks chiller on the far right side:

Beyond this area, is the A la carte dining area with proper dining tables, with large windows overlooking the taxiways towards the runway on two sides. Indeed there are views out onto the tarmac along the entire “front” wall of the lounge, but the dining area has the best views.

One thing I found a little odd was about the dining space, it wasn’t clear to me as a “newbie” whether I should wait to be seated at the staff terminal by the entrance, or find a table myself. The staff were also rather thin on the ground and didn’t seem to particularly want to engage with passengers.

In the end – we went and plonked ourselves down on one of the booths overlooking the tarmac, and perused the menu. I then had to go and find one of the staff to place our order.

I opted for eggs and soldiers:

Whilst Alex went for eggs benedict:

Both were really tasty and arrived quickly, although I did have a rather odd conversation with the member of staff taking my order when asking for Eggs and Soldiers – he asked “How would you like your eggs?”

He just got a slightly “champagned” blank stare from me for about 30 seconds whilst I panicked that I was about to make some kind of breakfast faux-pas, before he suggested soft boiled and I nodded and wandered back to my table…

Now, maybe I am just not the usual kind of egg connoisseur they get in Galleries First… but surely the only way you can have eggs with soldiers, without it becoming egg on toast, is soft boiled?!? – Unless any of you can enlighten me?

As we were flying First, I had contacted YouFirst 28days before departure to book our complimentary mini treatments in the Elemis Spa, rather than battle it out on the day with Club World for a walk-up appointment.

Initially – YouFirst told me there was no availability despite me phoning at 10am exactly 28 days before departure.

Ten minutes later however, the lady called me back to explain she thought it was odd to have no availability at all, so she had called the spa in T3. Turns out the appointments hadn’t been loaded to the computer system yet, so she had booked us in directly with the spa; facial for Alex at 10:15, massage for me at 11:00. Good recovery by BA, at least she looked into it further and bothered to phone me back, but they really should have got the appointments loaded to the system in the first place!

Alex went first, reporting back that his facial was perfectly nice, although the massage chair weirded him out – but he doesn’t like massages in general so this would be expected!

I went for my back massage, which was… interesting. You keep your shirt on and sit in this strange kind of half kneeling chair. The warm bean bags they use to relax you are nice, and the massage is fairly relaxing, but I really don’t get why they make you keep your shirt on. All it means is the back of my shirt got crumpled and prevents the therapist from really getting the knots out. I’d opt for a facial next time…

Compared to my previous BA Lounge experience, which had been at Gatwick where due to the impending terminal move, premium cabin and elite passengers are crammed into the No1 Traveller lounge along with those paying for access or using priority pass, this was worlds apart. (I really don’t understand the “We’re moving terminals in 9-12 months’ time, SO LET’S CLOSE ALL THE BA LOUNGES NOW” approach…”)

Whilst the offerings don’t sound as good as the Concorde Room, and the alcohol selections on offer are pared back, likely due to the lounge having to accept OneWorld Emeralds and BA Golds, it is an extremely pleasant place to pass the time before your flight.

The lounge is fairly large, has plenty of seating, and I liked the self-serve approach.

The Elemis spa is a nice touch, and overall we left the lounge feeling extremely relaxed ready for our flight to Las Vegas.