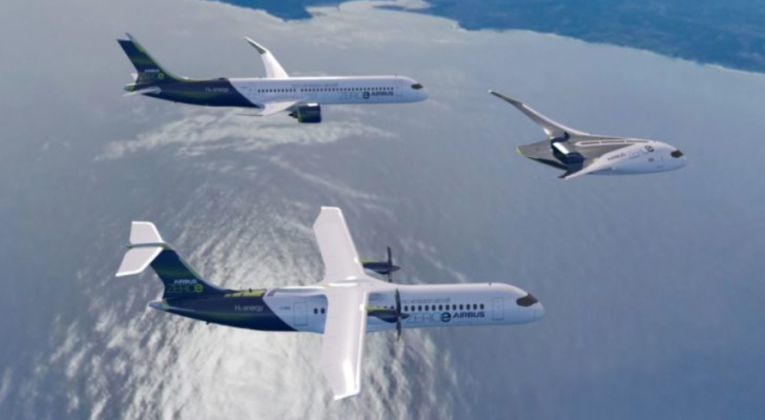 Aviation is under great pressure to reduce its environmental footprint and the industry is working intensively to come up with solutions for the future. Last week, the aircraft manufacturer Airbus unveiled three different concepts for zero-emission aircraft that could be in the air by 2035. These concepts each represent their own approach to achieving zero emissions, and explore different technology paths and aerodynamic configurations to achieve the company’s ambition to become a leader in decarbonisation of the entire the aviation industry.

All three concepts are based on hydrogen as the primary energy source. Airbus believes that this will be the optimal solution for achieving carbon-neutral goals, both for aviation and for other industries.

– “This is a historic moment for the entire commercial aviation sector, and we will play a leading role in the most important transition the industry has ever seen. The concepts we present today give the world a glimpse of our ambition for the future of zero-emission flying”, says Executive Vice President of Airbus, says Guillaume Faury. – “I strongly believe that the use of hydrogen, both in synthetic fuel and as a primary energy source for commercial aircraft, has the potential to significantly reduce the aviation climate impact.”

Switching to hydrogen as the primary energy source requires not only new aircraft, but extensive changes in the entire aviation ecosystem. Airports would need a completely new infrastructure for storage and transport of fuel. Public support with increased funding for research and technology, and mechanisms that encourage the use of sustainable fuels, would be an important element in achieving these goals.

Airbus has developed three different concepts for emission-free aircraft, which will meet different segments of the market.

The first concept is a turbofan design with a capacity of 120 – 200 passengers and a range of up to 2000 nautical miles. This is a somewhat shorter range than what the Airbus A320 family can deliver, but the new concept aircraft is otherwise not completely different from the A320 in both appearance and features. The aircraft will be powered by a modified gas turbine that burns hydrogen instead of conventional fuel.

The next variant is a turboprop design with a capacity of up to 100 passengers and a range of up to 1,000 nautical miles. Like the turbofan design, the turboprop engine will also use a modified gas turbine that burns hydrogen.

The latest variant is the more futuristic blended-wing body design, which we have previously seen from KLM and Tu Delft’s concept aircraft Flying-V, which recently had its first test flight in scale model . The wide fuselage provides many opportunities for new thinking when it comes to both cabin interior, as well as storage and distribution of fuel.

“These concepts will help us explore and mature the design and layout of the world’s first climate-neutral commercial aircraft without emissions, which we aim to implement by 2035,” says Faury. – “The transition to hydrogen will require action from the entire aviation ecosystem. Together with the support from the authorities and industry partners, we can meet this challenge by scaling up renewable energy and hydrogen for a sustainable future for the aviation industry.”