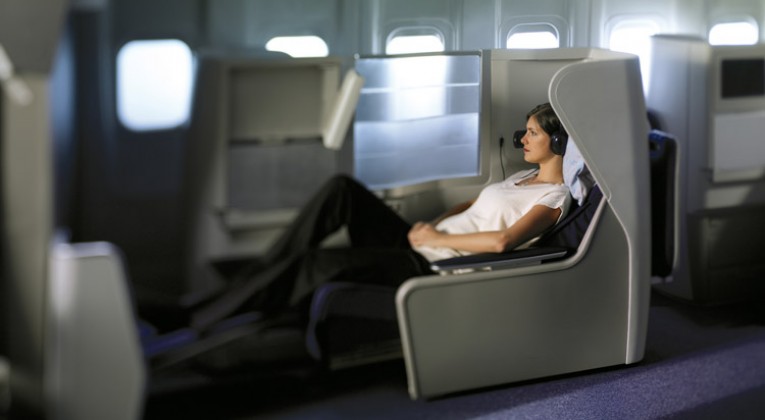 It had to happen eventually, after all the gin & tonic powered fun in the Terraces lounge at Logan Airport, we’d have to actually get on the plane to come home. My Avios budget didn’t stretch to First class in both directions, so after our outbound leg in First we were going to have to “suffer” Club World on the way home.

Is it worthwhile for a night flight?

There’s a school of thought around red-eye flights that you will be sleeping and don’t get to enjoy the benefits of a premium cabin, so should save your money/miles and put up with Economy/Premium Economy. For some people, that’s a valid option, but having spend a number of sleepless overnight flights due to close proximity of students who don’t want to sleep, or colleagues who snore like pigs, it’s not the option for me. Give me a bed and some personal space every time. (Unlimited free gin and tonic in the lounge also helps sway it!)

Having been fortunate enough to fly First recently, I was always going to be a little bit underwhelmed returning to the Club World cabin. I know BA‘s business class cabin doesn’t hold up well against other carriers, particularly the likes of Emirates, Singapore Airlines, etc. but there’s nothing wrong with it as such, it’s just more practical than luxurious. 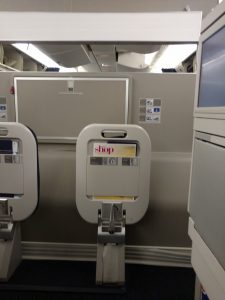 This is the view from the seat, taken while folks were still boarding so everything is brightly lit. The contraption in front serves multiple purposes;

That’s a versatile piece of plastic and metal, right there! If you want to stretch out, maybe have a drink and watch a film, the foot rest folds down. It is pretty comfortable  and makes a difference compared to having your feet flat on the floor. If sleeping what you are looking for (I was) then you lower the seat with the electronic controls and the base of the seat slides out, joining up with the foot rest, which magically becomes the end of your bed. You have a 10.4″ touchscreen entertainment system, and a table that folds out for meals. It’s all much more spacious than the minimal table you get in Premium/Economy but lacks the nice touches like table cloth, nice silverware and salt and pepper mills that you get in First.

We deliberately opted for the back row of seats in the Club Cabin, with my wife and I taking the two centre, rear facing seats and our son to the side facing forwards. During boarding this overlooked the Premium Economy cabin as shown here; 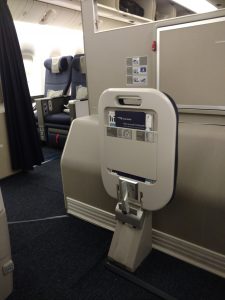 This was very deliberate so as to avoid the most annoying and ridiculous feature in BA‘s Club World design.

What isn’t immediately obvious on this seat map is when beds are in fully flat configuration, almost everyone has to step over, or be stepped over to gain access to the aisle. That’s right, to get from your Business Class, lie flat seat, for which you have paid probably a few £000, or considerable Avios, you have to step over someone else’s legs, approximately 18″ off the ground. Worse still, while sleeping you might get kicked by someone trying to clamber over you in dim lighting. If you don’t fancy the idea of this, opt for 15E and 15F if you’re flying in a four class 777. If travelling solo (or you don’t want to talk to your travel companion) 10B,D,G & J and 15A & K also offer easier aisle access.

For us, the main reason for booking Club World on the return was to get as much sleep as possible, so having already eaten in the lounge before boarding, all that was needed was a quick glass of champagne while everyone else embarked. 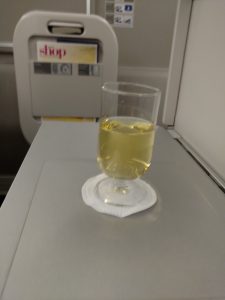 Once airborne, the seat is very easily lowered into a 6′ (183cm) fully flat bed. Note that this is a little shorter than the 6’6″ (198cm) offered in First. That extra length is important, and 6″ is bigger than you might think. You also don’t get pyjamas in Club World. You do get a drawstring bag with toothbrush and toothpaste, and a selection of Elemis toiletries along with a sleep mask and ear plugs.

We declined the dinner having already eaten well in the lounge, so can’t comment on that. I managed about 3 hours’ sleep in the end, waking up shortly before the breakfast service. It wasn’t massively inspiring, but I’ve had much worse airline breakfasts before. The croissant, yogurt and china were brought first…. 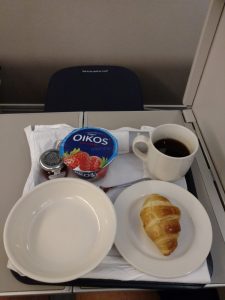 ….followed by a basket of hot bacon rolls. 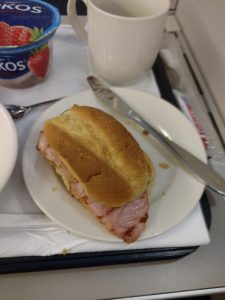 A few minutes later, they came round again so I had another one! The coffee was good and strong and perfectly drinkable. Nowhere near as good as the excellent coffee I enjoyed in First 3 weeks earlier, but still a welcome hit of caffeine.

Our arrival into Heathrow was uneventful, and as it was around 9:30AM on the August Bank Holiday Monday, the airport was reasonably quiet. Previously we have taken earlier flights back from Boston and found ourselves stacked up waiting for the runway to open at 6:00AM following a good tail wind across the Atlantic, so the later scheduled arrival worked out well for us this time.

Overall, I was very happy with the Club World experience for the overnight flight. The pre-flight lounge dining is a great option for these flights, meaning you can get straight to sleep once the seat belt signs are off. Having a flat bed (and with nobody stepping over me) was very welcome and the breakfast was enjoyable and served to partially wake me up. Use of the arrivals lounge in Heathrow Terminal 5 was a valuable additional benefit which we took some advantage of, but more on that some other time.