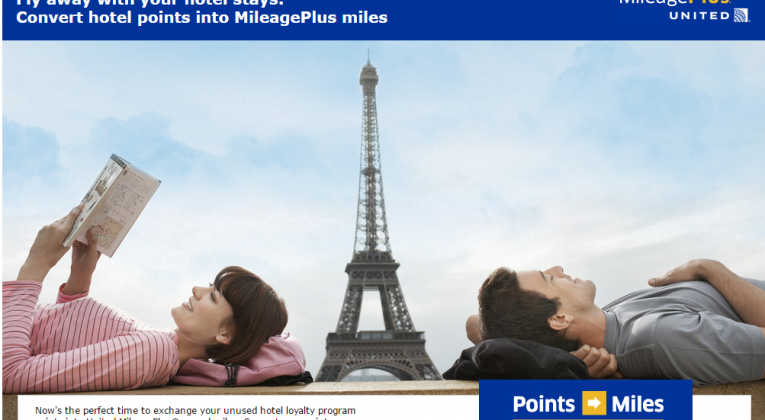 United Mileage Plus Miles have, historically, been quite difficult to get hold of from here in the UK, but the Starwood/Marriott merger has changed that. With a few tricks, it is now possible to get roughly 2 United Miles for 1 American Express Membership Rewards Point.

This is a relatively advanced post, so if you’re just getting started with Points/Miles and don’t understand everything in it, don’t worry! – always feel free to ask questions (no matter how simple/silly you think they may be) in the comments or on the forum.

United Mileage Plus is currently offering a 25% bonus if you convert Hotel Points to Miles, up to a maximum of 20,000 Bonus Miles.

You need to register here and the offer ends on 30th November 2016.

Even with the bonus, the only rate that is really interesting is transferring from Marriott Rewards. If you have SPG Starpoints, you can transfer them first to Marriott Rewards Points (1 Starpoint gets you 3 Marriott Points) and benefit from a much better exchange rate to United than if you transferred directly (note that transferring from SPG will work out better than from Marriott for pretty much any other airline loyalty programme apart from United!).

2: Marriott transfers to United Mileage Plus

The standard transfer rates are as follows:

At the high end, 50,000 United Miles requires 112,000 Marriott rewards Points, which is 2.24 Marriott Points for 1 United Mile. That effectively works out at 0.746 Starpoints per United Mile given the 1:3 transfer ratio between SPG and Marriott.

With the 25% bonus though, the numbers actually work out even better (but do remember you are capped at 20,000 Bonus Miles!):

If you have a lot of Marriott Points (or Starpoints or Amex MR Points), one of the very best value redemptions you can make is for a Marriott Rewards ‘Flight + Hotel Package‘.

Even if you value the 7 night hotel stay at zero (!!!), you are getting 1 United Mile for 1.776 Marriott Points – which is marginally better than the 1.792 rate you would get without the 7 nights at a hotel.

In other words, you can effectively get 2 United Mileage Plus Miles for 1.052 Amex MR Points!!!

You might decide that a fairer valuation of the 7 free nights should be half the 150,000, so 75,000 Points, because perhaps you don’t necessarily need 7 nights accommodation and will only stay 3 or 4 nights, or maybe you end up using the Certificate at a lower Category hotel.

Regardless of how you cut it – it’s a heck of a deal!

4: That’s great Joe, but you need a lot of Marriott Points for this to work – how do I get them?

Spot on – there’s no disguising the fact that this requires a lot of Points.

The bad news is that I don’t really think it can be realistically done without taking advantage of credit card sign up bonuses.

The good news is that credit card sign up bonuses are probably the easiest and cheapest way to earn big chunks of Points/Miles anyway.

As we’re back onto the tricky subject of credit/charge cards, it’s a good time to reiterate that nothing I write in relation to them or similar products (including the following) in any way constitutes financial advice – or indeed advice of any kind. It’s simply some theoretical reflections on how I might, or might not, personally approach the task of getting 270,000 Marriott Rewards Points.

Earning Marriott Points directly isn’t the way forward here – the Marriott credit card hasn’t been open to new applicants in ages and isn’t that good anyway. Fortunately, it is now possible to transfer SPG Starpoints (and therefore Amex MR Points too via SPG) to Marriott Rewards.

Bear in mind that it is possible transfer Starpoints freely between members of the same household and 50,000 Marriott Points per year to anyone for just $10.00 (free for elite members), which potentially makes getting a big pile of Points together a lot easier than might be thought.

A couple then, could easily earn 57,000 Amex MR Points simply from getting a free Gold card each and hitting the minimum spend (with the first person being referred, and then referring the other person themselves).

There is a link that should get each person 20,000 more Points for upgrading a Gold card to a Platinum card and hitting £1,000 minimum spend (you need to pay the fee, but can cancel as soon as you get the Points and get a pro rata refund) – so that’s potentially another 42,000 Points between them including the spend. (I’ve used the link without problem, but I have read that some people haven’t always received the Points so I won’t publish it on here. If you want to try the link, or indeed just want to be referred for a Gold or Platinum Card, email me at [email protected]

Round that up to 100,000 Points for a couple then (assuming they upgrade to Platinum and get the Points), as they are likely to be putting at least some of their normal spend on the card anyway.

Bearing in mind that everyone can receive up to 50,000 Marriott Points per year from someone else, if they had parents or other relatives/friends who they could refer for an Amex Gold Card who were willing to transfer their Points to Marriott and share them, it could be a great way to boost the total further.

Amex also issue Business Gold and Business Platinum Cards with sign up (and referral) bonuses too.

Another option would be the Starwood Preferred Guest American Express credit card (£75.00 annual fee, pro rata refund offered) which would earn 12,000 Starpoints for someone who was referred, after hitting the £1,000 minimum spend (rather than 11,000 Points if not referred). If that person then referred their partner, the referrer would earn an additional 5,000 Starpoints too, so a couple would end up with 29,000 Starpoints in total. Starpoints convert to Marriott at 1:3, so 29,000 Starpoints becomes 87,000 Marriott Points. (I’m able to refer people for the Starwood Preferred Guest Credit Card, as well as the Amex Gold and Platinum Charge Cards – just email me at [email protected]).

I’m not saying it’s easy to get together enough Points for 270,000 Marriott Points, but it’s certainly possible – especially with a bit of help from family or friends!

5: Why do I want United Mileage Plus Miles anyway?

Another superb question, and one I was fully intending to answer in this piece – but it’s already turned into a bit of a monster in terms of length, so rather than rushing through, I’ve decided to answer that point in a separate post!