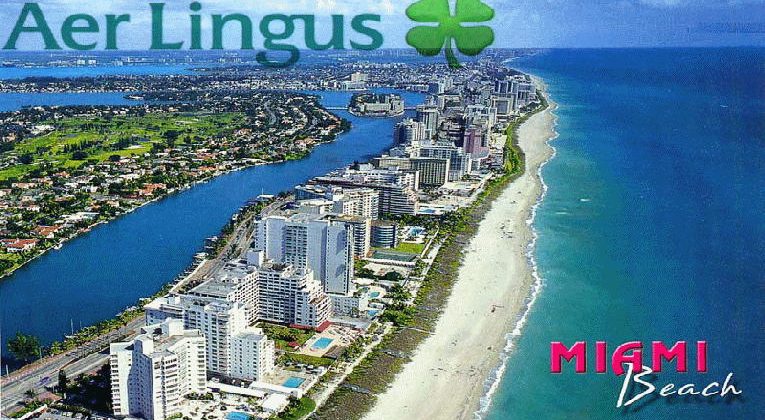 Most of this year, there have been rumours that Aer Lingus (EI) will launch a new North American route out of Dublin in summer 2017. This would add to the new routes to Los Angeles and Hartford Connecticut they started this year.

Miami (MIA) has been the firm favourite of those rumours. Before I saw any evidence to substantiate them, MIA made good sense to me. It’s a great leisure destination in its own right. However, it also brings various Caribbean resorts within a 1-stop itinerary of Dublin.

Research shows that there is great substance to the rumours. In Nov 2015, there were reports in the American press of MIA airport talking with Aer Lingus. And again in June of this year, Miami airport was reported as being in discussions about an Irish route. Separately, Willie Walsh the CEO of AIG, confirmed at a recent investors meeting, that a new North American route would launch next year.

Finally, last week an online Irish based travel news site suggested that MIA will be announced at an investors meeting this Friday.

At this stage I’m really confident we will see DUB-MIA announced, if not this Friday, then very shortly.

Pricing up a redemption

www.gcmap.com tells me, somewhat annoyingly, that DUB-MIA is 4165 miles, putting it just 165 miles into band 6 on BA‘s award chart.

This means booking a one-way economy seat on Aer Lingus will be 25K Avios year round, whilst business will be 75K Avios year round (BA does not have off-peak pricing for partner airline redemptions).  So a return in business class is 150K Avios. Taxes on Aer Lingus are traditionally very low, and of course there is no UK Air Passenger Duty. Expect to pay around £160 for a business return.

Looking at it from a mainland UK perspective, this will potentially provide an interesting redemption option for those that would normally have to fly into LHR from ‘the regions’.

An added benefit of flying out of Dublin is that you clear US immigration in Dublin. This means you don’t have to suffer the notorious MIA immigration queues.

Miami is in my sights for next year, so I’m keen to see these flights become available for personal reasons. I’m hopeful that this route will see biz seats available on redemption. Although Aer Lingus doesn’t release redemption biz seats on the SFO and LAX routes, this is because they are reserved for tech companies flying their execs to their DUB offices. I don’t envisage this being a problem on the MIA route, which is primarily a leisure route. For example, the Boston and Chicago Aer Lingus routes do have business redemption availability, although admittedly, not many.

I’ll do an updated article as soon as the routes and timetable are announced.