The promotion is supposed to go live today and will require registration. It will run until 18th December.

I value Starpoints very highly, primarily for the ability to transfer them at a generous 1:1.25 ratio to a fantastic range of different airline loyalty programmes. Even so, double points isn’t exactly setting the hotel loyalty world on fire – it’s solid and not out of step with much of the competition (Hilton are also offering double Points and Marriott’s autumn promotion is worse), but not exciting.

If your stay happens to include a Friday or Saturday, triple Starpoints is actually quite decent.

The restriction that stays have to be at least 2 nights long to be eligible for bonus points is disappointing. 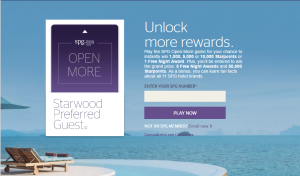 Remember that today is also the last day to win Starpoints and free night certificates from the Open More’ game!