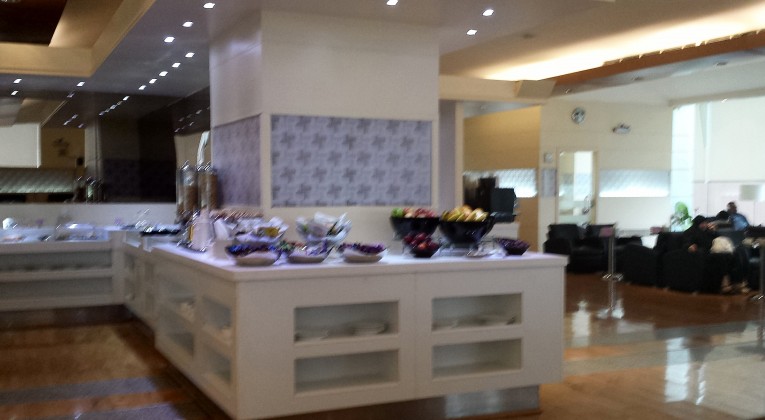 King Abdulaziz International Airport (Jeddah) is the busiest airport in Saudi Arabia, and the third largest airport in the kingdom. 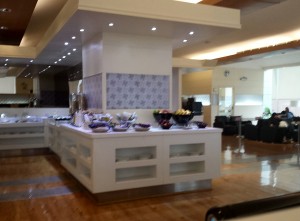 In particular, it’s well known for its Hajj terminal, which was specially built for pilgrims travelling to Mecca, and can reportedly handle 80,000 passengers at any one time.

Having completed a business trip to the Kingdom, I found myself travelling back to Europe with Saudia in February 2016. As I was travelling in Business Class, I had access to the Saudia lounge at the airport.

The “Saudia Alfursan” lounge, named after Saudi’s Frequent Flyer programme, is located in the South Terminal and stays open 24 hours 7 days a week. While a touch hard to locate, the entrance (when found) is really impressive. 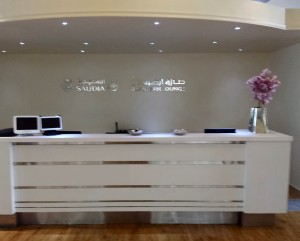 I presented my boarding pass and was welcomed in a friendly, professional manner and told my flight would be announced when boarding. For those that enjoy such views, the lounge overlooks the ramp and even has a main taxiway directly in front – so you can planespot to your heart’s content. The lounge itself is generously sized, with plenty of seating in the form of leather armchairs, including several arranged around small tables. 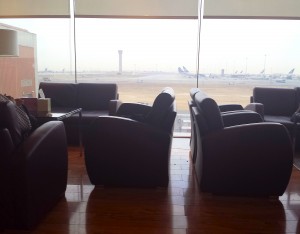 I arrived at 0800 and although the lounge was busy, getting a seat was not an issue. The lounge is sizeable and seating areas are plentiful, which allowed me to work with no one directly beside me.

The lounge has access to a smoking room and has all the other amenities that one comes to expect in a Business Class lounge: flight monitors, internet and wifi access and televisions. You were not just limited to wifi either: there is a dedicated, secluded work-space area with a bank of computers with large screens, that provided internet access with very fast connection speeds 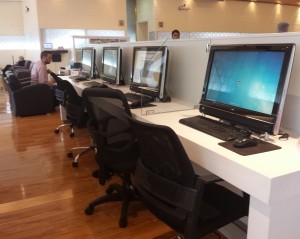 I spent a lot of my time surfing the web and working on my own laptop and was quite happy with the speed and smooth operation of the wifi connection.

There was also a good selection of local and regional newspapers, with a smaller choice of international magazines.

On the refreshment front, a selection of hot and cold food was available, together with a variety of drinks but, of course, no alcohol. 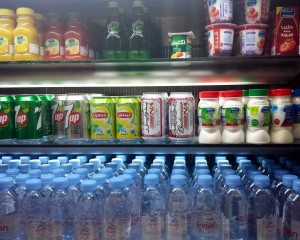 I was pleasantly surprised with the food choice available. Among the hot items were scrambled eggs, Spanish omelettes, Nutella crepes, tempura vegtables, fried mozarella, “beef bacon” and a local dish called “foul beiruti”. There was also a large selection of breads, croissants, fruit and dates. 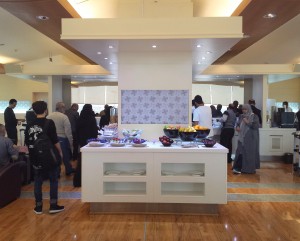 As I was in the lounge at 0800, there was also a good selection of breakfast cereals present. Beverage choice was the usual tea, excellent coffee, soft drinks, water, juices and a new one for me: cans of Budweiser NA. the “NA” being Non Alcohol!

Although the lounge was very busy, it was extremely well attended to by floor staff, who constantly came around taking used plates and glasses from the tables. They were in fact so efficient, that if you left your seat for more than a couple of minutes you could rest assured that whatever food you’d left would have disappeared on your return: finished or not. Over the years I have been in many lounges that appear to have no staff other than the “gate guards” at the entrance, so the generous staffing of the Alfursan lounge was impressive to see. Without fail, the staff were professional and polite, too.

So, the food and beverage choice met my expectations but the “pièce de résistance” was the wonderful personal service at the end of my stay. As my departure time neared, the receptionist came looking for me to personally inform me that the gate was open for boarding. When I thanked him for doing so, as I could see the lounge was busy, he replied that I was the only person in the lounge travelling on that particular flight and he just wanted to tell me in person. A really nice touch that left me with an excellent parting impression of the Saudia Alfursan lounge at Jeddah: a comfortable, well-appointed lounge, complemented by some excellent staff.