Having completed a successful business trip to Jeddah, Saudi Arabia, recently I returned to Europe via Frankfurt. Although I could have flown with various different carriers, my airline of choice was Saudia.

Jeddah has 2 main terminals, the North and South Terminals. All Saudia flights depart from the South Terminal and so it was there I found myself checking in for my 10:25 flight to Frankfurt.

As I was flying Business Class I made my way to the dedicated Skyteam Business Class check in area. There were 4 desks open with only one person in line ahead of me. In no time I was checked in and making my way through security and immigration. These were completed efficiently and in a very friendly manner.

As in a lot of airports, after security you walk directly into the duty free area. Jeddah was no different with an extensive shopping area to browse. As expected, alcohol was not available and so, strange as it may be in any duty free shopping area, this posed no surprises for me. I had a small problem finding the Alfursan business lounge as the entrance is tucked away to the side of the shopping area. When I did find it, I was pleasantly surprised with the entrance, amenities and size of the lounge – a review will follow.

A boarding announcement was made and I made my way to the gate. As best I could see, almost all passengers are bussed to their aircraft at Jeddah. The bus was almost empty driving across the ramp to our waiting Airbus A320. As it turned out, my flight would operate with a very light load. On boarding I counted 6 passengers in Business, and perhaps 20 in economy. Saudia operate 2 versions of the Airbus A320. My flight aircraft had 5 rows of Business seats configured 2+2, whereas the other variant has 3 rows configured 2+2.

As I sat in seat 2A for the almost 6 hour flight to Frankfurt I pondered on the type of service I might experience with Saudia. The initial signs were positive – as the cabin was almost empty, the feeling of flying on my own private jet was palpable! 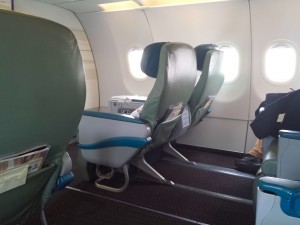 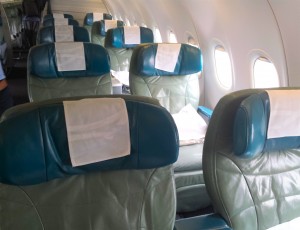 The seats were very comfortable but I was surprised to see that the controls were not electric but the “push button” type. 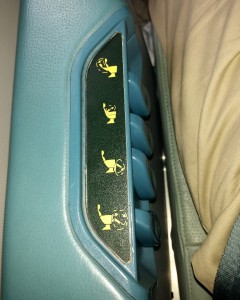 Within minutes of settling in, Majid, the cabin supervisor introduced himself in a very polite and courteous manner. He wished me an enjoyable and pleasant journey. I had a refreshing fruit juice and accepted the hot towel that was presented. A short time later a choice of English language newspapers (The Saudi Gazette & Arab news) and magazines, including TIME were offered. This was followed by something which I have come to love when flying with Saudia, the welcome Arabic coffee and seedless dates. A simple yet lovely regional touch that always impresses me.

The Business Class menu and amenity pack was given to me before the video safety briefing.

Our scheduled departure time was 10:25, and with everyone on board we pushed back exactly on time and were airborne at 10:31. When the seat belt sign was turned off, Majid came to me with headphones and took my order for dinner. There was a choice of 3 appetizers & two soups. Although the soups looked very tempting, I did not partake as I always consider drinking soup on an aircraft an invitation to destroy a good shirt or suit, instead I had the absolutely wonderful “Western Appetizer” which consisted of grilled prawns with pesto sauce, salmon rolled with cream cheese, sun dried tomato and shaved Parmesan cheese.

The entree choice was limited to two named dishes and a “Speciality of the week” dish. I opted for the “Chicken stuffed with Sage and Mozarella” which consisted of pieces of tender stuffed chicken, gravy sauce, mashed pumpkin and potatoes, asparagus and red bell pepper. The entree was followed by a choice of 3 desserts, my choice being the “Pistachio & Sour Cherries Gateau” which was presented as a Pistachio genoise with plain syrup punch, sour cherry and pistachio mousseline … it was sensational! 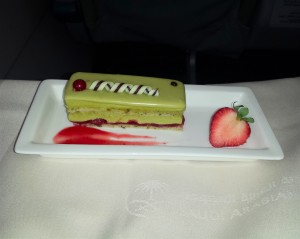 On this flight Saudia also offer a “meal on demand” service and will serve you your meal at any time prior to one hour and thirty minutes before landing in case the regular meal time does not suit you.

I am a big fan of In Flight Entertainment systems and the Thales-supplied system on my flight did not disappoint. The moving map feature was clear, precise and very informative with points of interest being highlighted as one of the options. As we routed over the east coast of the Red Sea heading for Sinai and the Mediterranean it was interesting to have points of interest highlighted and of course to have names placed on the cities and towns that could be seen from the window.

The IFE system included channels showing documentaries, business programmes, comedy, sports and of course a very good selection of Latest release Hollywood movies. Also on offer were a number of “international movies” in various languages. All of these choices were in addition to all the Arabic language channels. 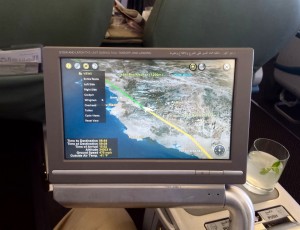 During the flight Majid, was most attentive but not in any way intrusive. As a drink of choice, I have been completely won over by Saudias presentation of the “lemon & mint” beverage. In my own personal opinion it is the most refreshing drink one can have, whether flying at 34,000 or not. With one hour 45 minutes to arrival, more Arabic Coffee was offered, another hot towel and, something which I miss with a lot of carriers … a hard boiled sweet!

Before I knew it we were on the approach to Frankfurt where we had wheels down at 16:30 local German time, which is 2 hours behind Jeddah. This gave us an on-time arrival.

In what I can only describe as exceptional end to a really good experience with Saudia, my bags were delivered on the carousel in the terminal at 16:50, just 20 minutes after we landed and 15 minutes from the doors opening on plane.

How was my overall experience? In short – absolutely amazing. I could not find fault with any aspect of the flight, aircraft condition, service, food, and as I said, even the baggage delivery was very fast. The crew and check in staff were professional, courteous and polite. Check in staff were the same.

Indeed, I would quite genuinely rank this among the best flights I have ever had.