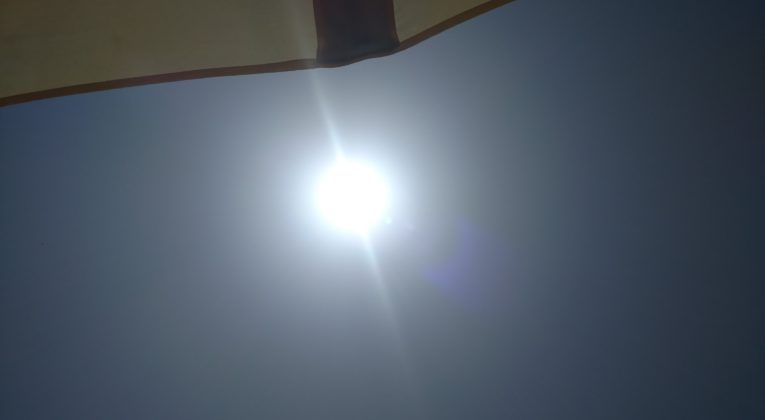 This is the final section in this 4 part series, covering the Crowne Plaza Algarve-Vilamoura

Following on from our extended stay in the car park at Faro airport waiting for our transfer, it was almost midnight when we finally arrived. We were still met at the kerb by hotel staff, who collected our cases from the boot and took them into the hotel.

I had been in touch with the hotel in advance to ask a few questions (and try my luck at getting an upgrade due to my Platinum status) and they helpfully answered all my queries, but trotted out standard IHG policy about space available/higher floors/etc on the upgrade question. Reward Nights book into a “2 SINGLE BEDS SUPERIOR NONSMOKING” room and I wanted to ensure we had one bed. I politely asked if we had been upgraded at all, and was told we had a Deluxe Sea View on a higher floor (10). This is in keeping with most of my IHG Platinum experiences, i.e. it’s a game of spot the difference between what you booked (which you never get to see) and the supposed upgraded room.

Once we’d completed the administration, including declining the special offer of €18 each per day for breakfast (!) the nice man who took our cases checked what room we were in and promised to bring them up shortly. Off to the lifts and up to the 10th floor. 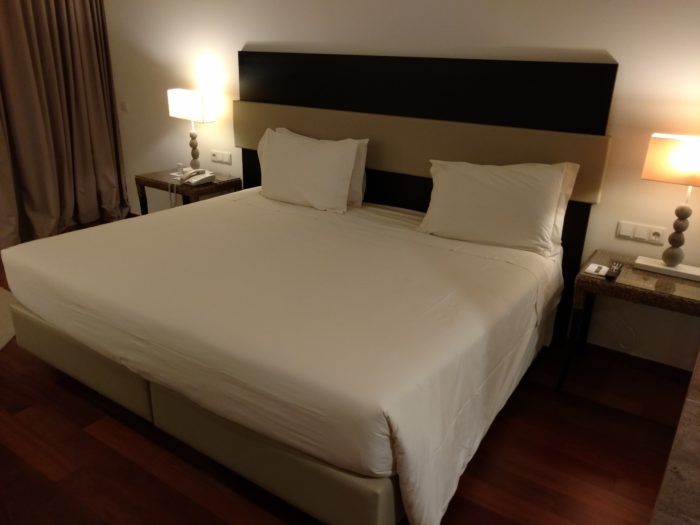 Looks like it started off as 2 beds, but held together well for one ~7′ wide bed.

Yes, that is the bathroom viewed from beside the bed. No, we haven’t left the door open. That is a floor to ceiling window into the bathroom. Now, I love my wife very much (and she seems to tolerate me) but some things are best kept private. Fortunately we had seen reviews of the hotel before and found a switch to lower an electric blind that covered the window. Once inside the bathroom, there are 3 separate areas/rooms: central area with wash basin; large walk in shower; and toilet (with bidet – this is Europe). These areas are separated by glass doors, too.

The next morning was a beautiful sunny one (as were all 7 mornings we were there) and we got to appreciate the view of the sea and the town of Quarteira. 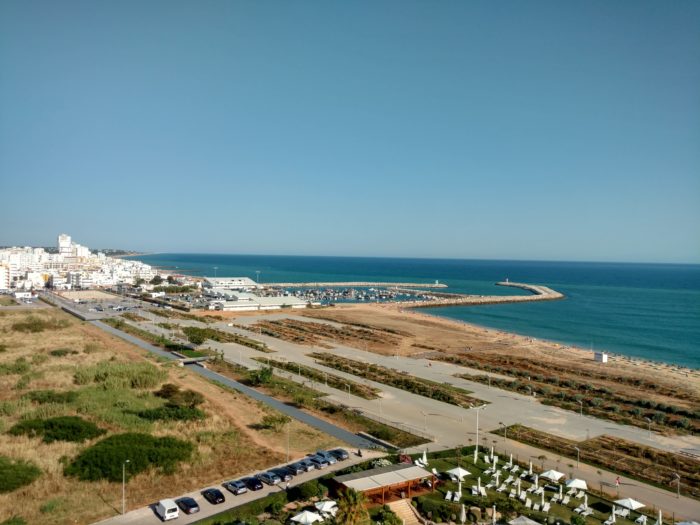 The bed was extremely comfortable, and coupled with the efficient black out curtains, we both slept very well all week, which is unusual. The room had a Nespresso machine, and 4 capsules are provided free of charge. Further capsules are charged at €2. Two bottles of water were complimentary, with further drinks in the mini-bar at usual hotel mini-bar prices.

There was a safe in the room which was plenty big enough for phones, cash and a couple of tablets. What we only discovered as we left is there was a mains socket inside the safe, which was a great idea enabling you to charge your devices while safely locked away.

One thing that my wife noticed, more than me, is that there is no mirror outside the bathroom. This is apparently an issue for reasons I fail to understand. Something to do with hair straighteners, I think?

Eating in hotel restaurants is generally something of a lazy, fallback position for me. Usually this is reserved for when I’m travelling alone for work and can’t be bothered to go out (plus of course I get the points for eating in a hotel). Being on holiday with my wife, we took a different view and wanted to explore Vilamoura and try a diverse range of restaurants.  We did well at that, and tried some very good Portugese, Italian and Indian restaurants. None of these were in the Crowne Plaza, though. Eating in hotels is also generally slightly more expensive (and a tentative perusal of the menus confirmed this), and often not justified through quality, so I make no apology for not dining in the hotel.

We took repeated advantage of the pool, which is surrounded by a large quantity of sun-loungers, both immediately beside the pool, and on the grass areas that surround two sides of the pool, providing a vast area to sunbathe. 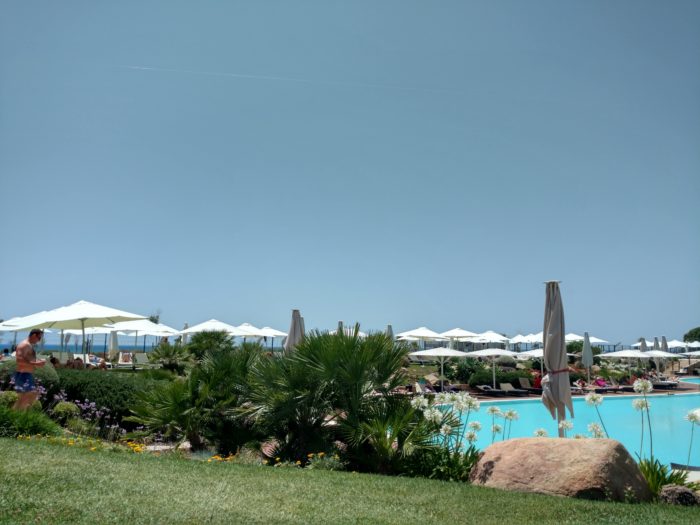 There was a strange system of acquiring pool towels which went as follows;

Not sure what this solves, other than people walking in off the street and asking for towels (there is a gate near the pool to access the path to the beach, but this is opened only with a room key). As the hotel got busier at the end of our week, we did observe that most annoying British behaviour, which we used to mock the Germans for: Reserving sun loungers!  It had reached epidemic proportions by the last two days, and we struggled to find spare loungers that did not have neatly folded towels with token books/magazines/flip-flops on. There was a list of rules on a sign which forbid this practice, but it was never enforced. This could be easily fixed

Ok, the charge might need refining, but do you sense how much this annoys me?

The pool and surrounding area was very clean, and there were plenty of staff on hand to attend to parasols, collect empty drinks and rubbish. Drinks service seemed intermittent, and possibly only offered to larger groups as we were never offered. The pool side bar was well staffed though, so it was never a long wait to be served. There was also no lifeguard on duty, which may be a concern to some.

To be clear, the hotel does not have a private beach. However, the beach is just a short walk across a cycle and footpath from the hotel. The hotel is happy for you to take your pool towels to the beach. Loungers and parasols are available to hire on the beach, but this is not run by the hotel. There are a number of lifeguard stations on the beach, which might give some reassurance for anyone wanting to have a swim. To show how close it is, this is a photo of the hotel taken from the beach. 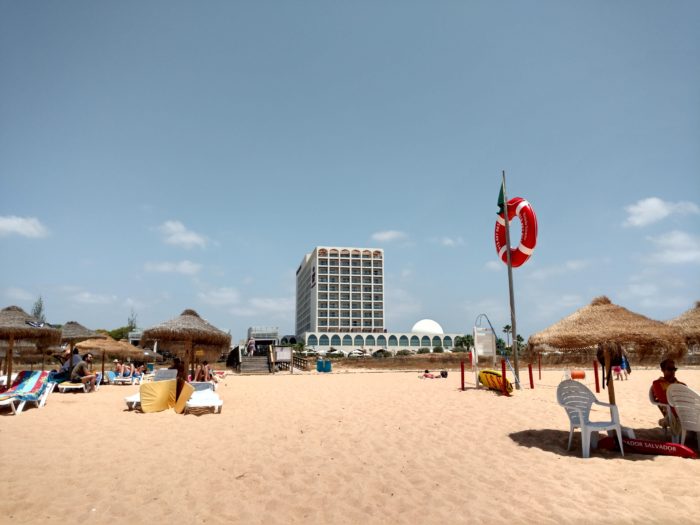 Given the temperature was generally up around 40 degrees most days, running outside during daylight hours would have been tough, so we used the air conditioned gym in the hotel basement on a few occasions. It felt cool enough on walking in, but after a few minutes on the treadmill, it got pretty hot. The gym was very clean, and equipped with a decent variety of equipment for a hotel

There was also a filtered water cooler and a good supply of clean towels. 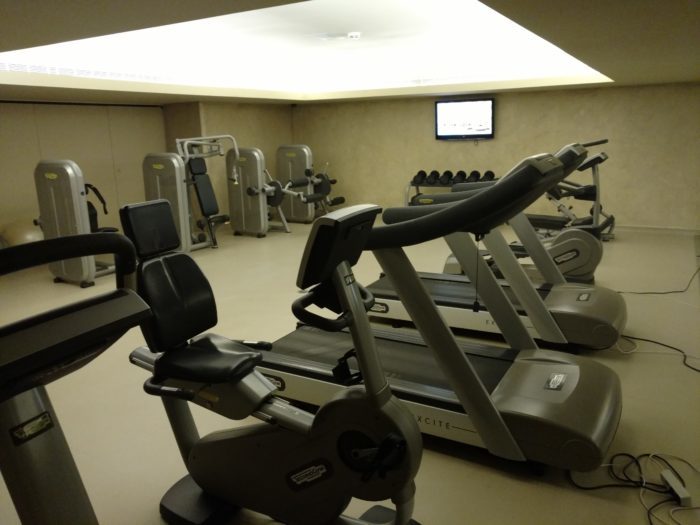 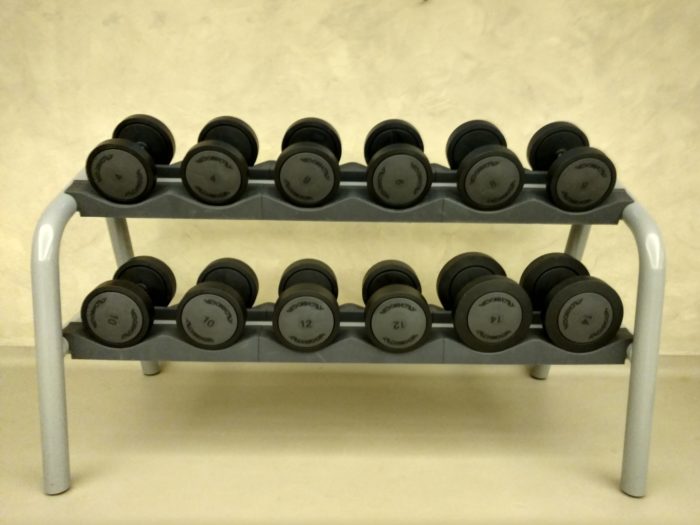 Most of our drinking was done pool-side, or in Vilamoura, but we did have to seek shade and air conditioning one afternoon. We had a couple of beers in the comfortable seating area just inside the door from the pool. You can see from below it is nicely appointed and just as clean and tidy as everywhere else in the hotel, if a little short on atmosphere. 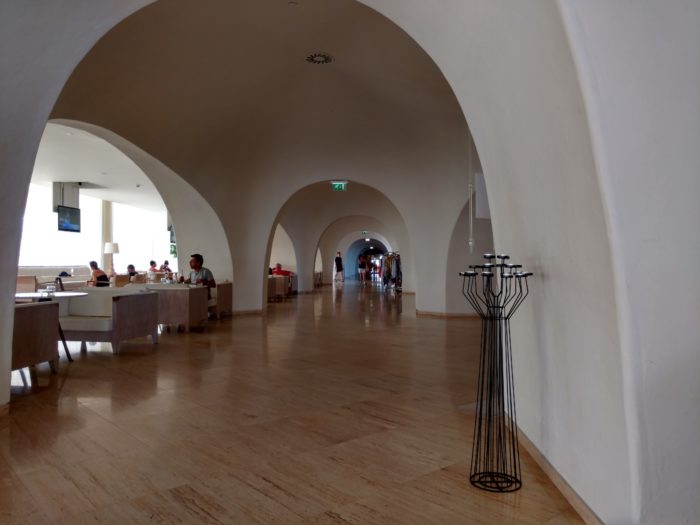 If I was to return to Vilamoura, this hotel would be a serious contender as a place to stay. It should be noted that the rewards night rate has increased since I booked this, and standard rooms are now 35,000 points per night, versus the 25,000 I paid. Status benefits are comparable to most IHG properties, and is likely to be limited to an upgrade to a higher floor, and/or slightly better room. Spire Elite members may do better, but I was very happy with the room we had and would have no problem spending another week there.

With this series of articles, I’ve been cataloguing additional costs associated with the holiday. The purpose of this was to give a comparison to booking (and paying for) a holiday booked as a package. My only other costs in the hotel were drinks, which I would have spent either way, so no additional costs to report for this final section.

Overall, I’m pleased to have put together a decent holiday at these costs, and look forward to accruing more points to do something similar soon.

I hope you’ve enjoyed reading about it – If you have any questions about the hotel or Vilamoura, ask in the comments and I’ll do my best to answer them.