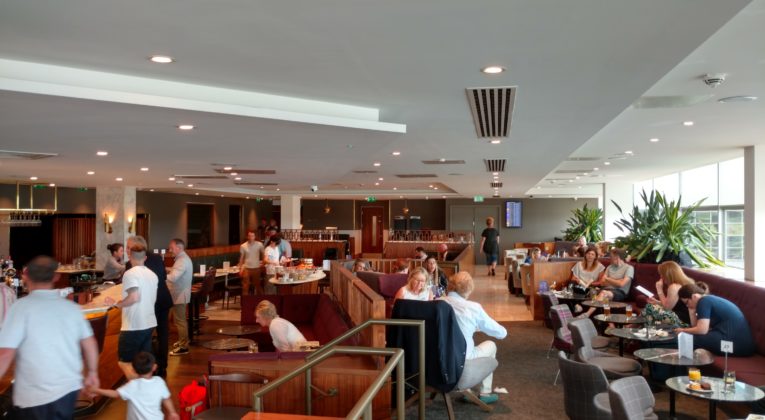 Long term readers of InsideFlyer UK might recall a challenge which I wrote about last year to book a free holiday. Not just a free flight, or a free night in a hotel, but could I get a decent beach holiday using points and miles? Spoiler alert: I did (well, pretty much) and my wife and I have just returned from a lovely week at a 5 star hotel in the Algarve and I wanted to share my experiences before the tan fades (actually the UK weather has been helping preserve it a little!).

I’ll be serialising the report in 4 posts;

In each one, I’ll be letting you know the additional costs that have been incurred, and we’ll get to a total at the end of how much my “free” holiday cost.

Getting to Gatwick Airport

Here’s the big problem in my view, as we live in the Midlands, Gatwick is something of a trek to get to, and takes in just about the worst part of the M25. With so many potential congestion points around Heathrow and the M3 junction, trying to plan your arrival time is something of a lottery. Travelling on a Saturday it wasn’t too bad, apart from a largely stationary section of the M25 near Heathrow that my navigation app routed us around saving us a few minutes.

I had booked meet & greet parking, as we had no desire to drag our cases onto a bus for a 20 minute transfer to save a few quid. Having researched the various operators and cashback sites, I settled for booking with SkyParkSecure.com. I’ve used them before and never had any problems. They are on Topcashback, but I compared that with discount codes available from sites like MoneySavingExpert and found those better value as a guaranteed discount versus cashback.

Of course I had absolute trust in the organisation I had just handed my car keys to, but still felt compelled to take this picture… 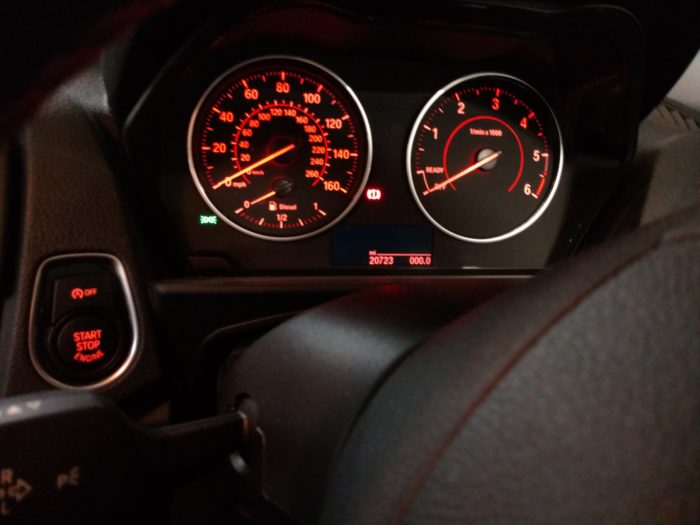 Checking In with BA

Once the car was dropped off in the short stay car park, it was less than 5 minutes to go down the lift, and across the road to the South Terminal. I was all set to head for the automated bag drop, but my wife suggested we use a manned desk. This turned out to be a great idea.

Remembering that I had booked Euro Traveller (Economy) flights using Avios and have no status with BA I had absolutely zero right to an upgrade. That didn’t stop me asking, and while I didn’t get Club Europe (Business), the nice lady offered us 2 exit row (13) seats, which gave some extra leg room. When checking in online 22 hours earlier, I could have selected those for £27 each, but decided against it for a 3 hour flight.

My wife was quite impressed with Gatwick, and appreciated the considerably smaller size versus Heathrow which is where most of our flying originates. There is some merit in everything being closer together; you never have to walk too far.

Security was pretty quick, getting through the regular channels (no priority access for us, today) in under 10 minutes and we were soon reunited with our shoes and phones and on our way. Personally, I felt like we had walked into a small shopping centre, rather than an airport. There were a number of high street shops, such as Next and JD Sports and it felt like it was all cramped together with limited space to just sit down and relax. What we did discover on walking to the gate is there is a Quiet Zone which is just rows of seats set back from the main retail area that would have been suitable for relaxing in if we didn’t have Lounge access.

Having looked around Next and JD Sports, we concluded that no bargains were to be had and heading for the lounge. “What lounge?” I hear you say? Obviously no airline lounge privileges in Economy (not even for those in exit row seats), fortunately I had my trusty Lounge Club card with me. This is issued along with the excellent American Express Preferred Rewards Gold Card and entitles the holder to two visits per card membership year. We headed for the No.1 Lounge and joined a queue of about 10 people to check into the lounge.

When, eventually we reached the front, the gatekeeper declared on presentation of my Lounge Club card that they were full. We were offered a choice of pay £15 each to upgrade to the Club Rooms with its premium drinks and snacks or come back in half an hour and see if it is quieter.  We took another walk around the shopping centre and came back 10 minutes later and saw a different dragon who swiped the card and let us in. She did check with another colleague; “Are we accepting cards?” who didn’t seem to know, and assumed they were. Surprisingly enough, the lounge was busy, but not “full” as this photo taken shortly after shows;

The cynic in me suspects this is a scheme to extract maximum cash from holders of cards such as Lounge Club but they got nothing out of me, so I was happy enough.

The lounge has a manned bar with a range of draft beers, wines and spirits. 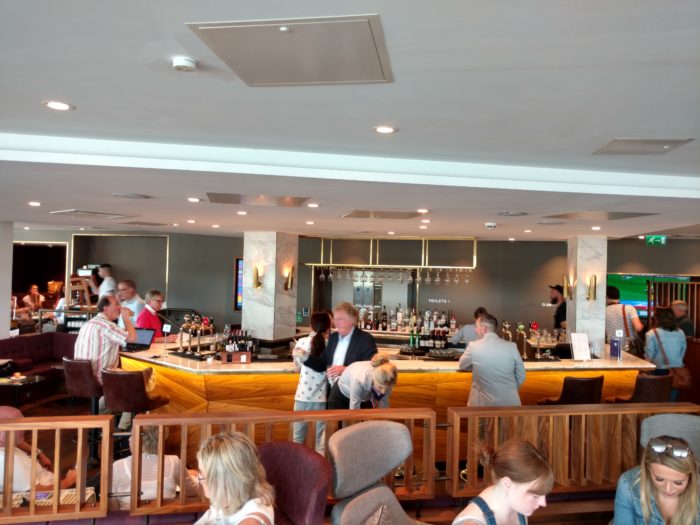 From the bar you can also order small meals from the menu:

There are also some premium (chargeable) drinks options shown:

As neither of us are champagne drinkers, no money was spent here. There was also a large vat of tomato soup to help yourself from, along with nuts, crackers, a coffee machine and a selection of cake and brownie slices.

The rules on the menu state “One Complimentary Dish per Person” although my experiences suggest this is not well policed / easily circumvented 😉 Soaking up the London Pale Ale, followed by a few Gin and Tonics was a fish finger sandwich and a bacon sandwich (oh yes, this is living it up!)

It won’t win any awards, but it was all tasty, although the bacon sandwich had been microwaved.

The lounge has great views over the airfield, so plenty of opportunity to spot planes if that’s your thing (if you’re here, it probably is to some extent!) 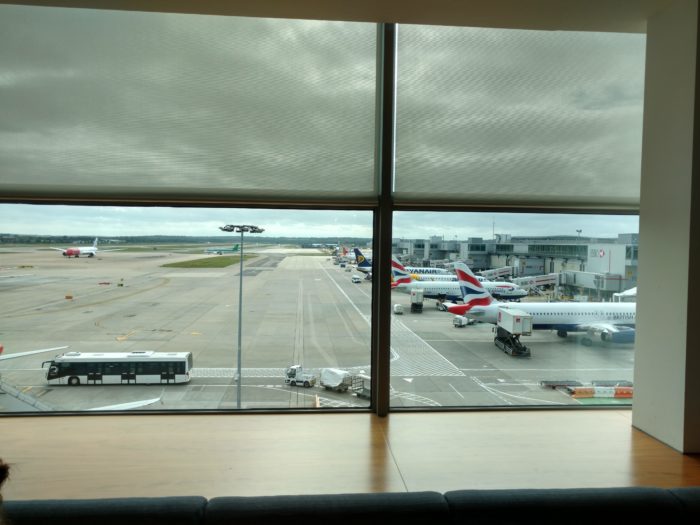 As our flight ended up around an hour late, we spent just over 3 hours in the lounge (longer than is theoretically allowed!) and during that time the table was not cleared once.

I actually think this is how they police the one meal per person rule. Or maybe, they were just a little tardy with their clearing up that day?

It was a common theme:

There were toilets in the lounge, and although I didn’t take any photos (people don’t like that!) they were modern, well appointed and clean. Probably better tended than the main lounge area.

No Hollywood actors this time, unlike when my wife was swooning over Chris Hemsworth at Heathrow a couple of years ago. She did however seem convinced that she’d seen one of the doctors from the reality show “GP’s Behind Closed Doors”.

So that’s the pre-flight experience, I hope it has helped give a feeling of what it’s like to spend 3 hours at London Gatwick airport. I would have been rather unhappy if I hadn’t had lounge access for this visit, so thanks Amex and Lounge Club 🙂

The next post will cover the flight, which was my wife’s first experience with ‘buy-on-board’ catering options.