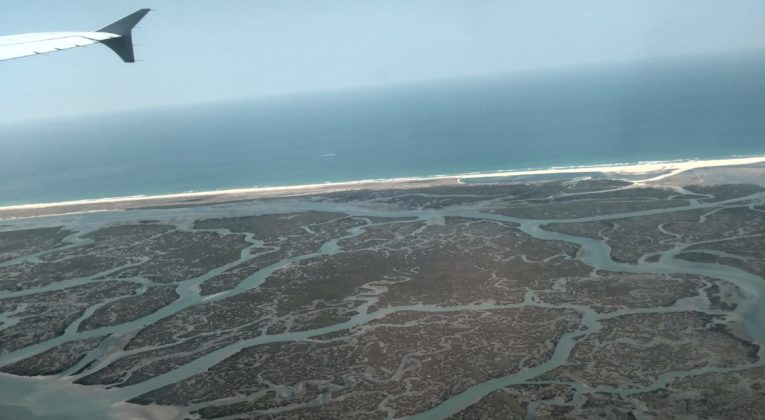 Following on from my previous article on our experiences at London Gatwick, this one will cover the BA Economy (Euro Traveller) flight with buy on board catering.

The day’s earlier flight with our aircraft had been delayed by around 4 hours, and while some of that had been clawed back, we were still delayed by an hour. Enough to be irritating, but not enough to get compensation under EU261 🙁

There were still some residual technical issues and the air conditioning didn’t work properly until we were airborne. Thankfully everything else seemed to work OK.

On the return leg, we boarded on time, but were held on the stand for 30 minutes due to anticipated congestion in the South East UK. Thankfully the air conditioning was working fine as the temperature was just over 40 degrees for our midday scheduled departure. This time was made up en route, and we landed at the scheduled time.

We had booked a Euro Traveller (economy) redemption and had been fortunate enough to be assigned exit row seats on an A320. My wife had only flown long haul, widebody jets for several years and perhaps expected more room than there really was. She was slightly shocked when I pointed out the “Exit”.

That said, you can see considerable extra legroom (I’m 6’4″) in this exit row, which I really appreciated.

We ended sitting next to some guy who was off to play golf with his mates, and insisted on telling us all about himself. This is what we learned about this gentleman:

Now obviously I could have helped him out with at least one of the above, but an hour into the flight I concluded that I did not want to encourage further interaction. ???

On our return journey we were only offered 29E/F which is the very back row. This is despite checking in within 20 minutes of online check-in opening. Not ideal seats, but at least they were together (looking at you Ryanair!). They actually turned out to be OK seats, and we could recline them without fear of offending anyone behind us. Legroom wise, it was sufficient, but getting things in and out of the seat back storage was awkward.

From my window seat I got some great views on a clear day;

Buy on Board Catering

I won’t fill this post with full size images of all the options for buy on board, but I did take some pictures, and you can take a look at each section by clicking them here

The prices are not that bad, comparable with Marks & Spencer’s outlets at motorway service stations. The option to pay using Avios will be valuable to some (I have better uses for Avios myself!). The value placed on Avios here is 0.8p each, which we can often do much better than, but wouldn’t feel like an obscene waste.

After a few hours in the lounge, we had no need or desire for further food and drink, plus this was meant to be a free holiday!

The short haul A320s that BA operate on this route have a movable divider between Business and Economy which signifies the border between free food and buy on board. This flight had 6 rows of Business, leaving roughly 23 rows to pay their own way. Why is that relevant? It seems one of the cabin crew was new and was being coached by his colleague which meant it took longer than it might to serve everyone. It didn’t help when people tried to pay cash, but to fair to BA, that is made clear at every opportunity. Looking back to the rear of the plane, I saw that they *just* served everyone before the seat belt signs went on for approach to Faro.

During this extended service, everyone forward of the cart had to use the forward bathroom which is generally intended for Club World passengers. I felt sorry for the people in  1A and 1C who thought they had prime seats for dinner but just had the backsides of economy passengers who were queueing for bathroom in their faces.

Anticipating slow service on our return flight, we picked up sandwiches at Faro airport. Another smart move by us: the cabin crew had no sandwiches left by the time they reached row 28. Not just limited choice, or something I didn’t want – no sandwiches at all!

This still doesn’t seem right to me, but then I’ve never flown a low cost airline. Therefore I still expect food and drink when flying, particularly on a national airline. Aside from the principle, the organisation and administration looks poorly implemented:

On the positive side, the quality does not seem to be an issue. Although we didn’t eat on this trip, I have experienced Marks & Spencer’s on board a previous BA flight, and you know what you’re going to get. The Aberdeen Angus Beef and Red Chutney Bloomer (that’s a beef and pickle sandwich to normal people) is as good as a pre-packed sandwich on a plane could be. For £4.75 or 600 Avios, it’s fairly priced, in my view. The spirits, mixers and soft drinks are all quality brands so I’d have no complaints drinking a Bombay Sapphire with Fever Tree tonic (other than paying £6.00 for it, obviously!)

If you view flying purely as transportation from A to B, this did the job and people should have no problems with choosing BA for their journey. However, if you prefer to view it as more of an experience, then BA is going to alienate you with their seemingly unstoppable push to be as cheap as possible.

Personally I have a big problem with trying to make air travel ‘cheap’. Oddly enough for an InsideFlyer contributor(!!!) I’m not particularly keen on flying, but when I have to, I’d rather sit back and have unlimited gin & tonic available to take my mind off things and help me relax.

The ability to redeem Avios (particularly with low taxes and fees via Reward Flight Saver on short haul) is a huge saving grace for me, and means I will continue to choose BA for such trips.  If that went away and I had to spend actual money, I would have to look at one of the many other options who all want to differentiate on price rather than service.