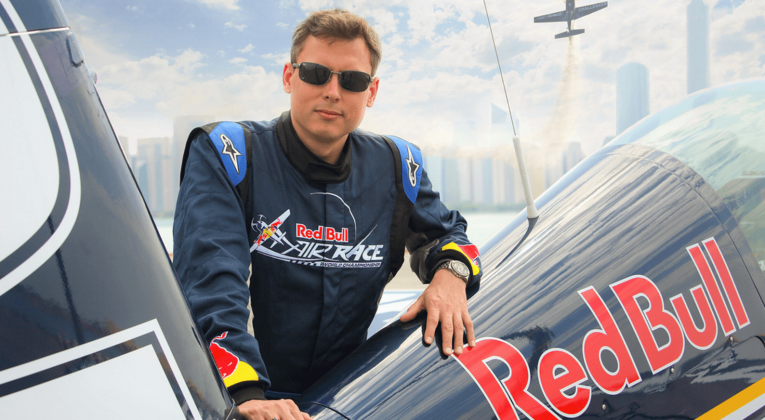 During the race, the pilots need to complete a course by passing different so called gates, made by huge inflatable pylons.  Every gate needs to be passed in a certain way. There are gates where you have to fly straight and gates that form a chicane and at others the pilot needs to do a vertical turn.

The racing season traditionally kicks off in Abu Dhabi before moving around the world, going to destinations ranging from the UK to China, before landing in the USA for the finals.

As this year’s racing season draws to a close in Las Vegas, we sat down with one of the pilots, the Swedish born Daniel Ryfa, for an interview. Daniel became impassioned with flying from a very young age already.  He was piloting gliders as young as 14 and soon discovered his love for acrobatics  in the sky.  He is also a supporter of the Aviatrix Art Project.  This project, started by female pilots, wants to raise awareness and money for the fight against cancer. Daniel shows his support for this project by competing in the races with a custom painted helmet promoting the website.

How long have you been flying in the Red Bull Air Races?  And how did you become involved with them?

In 2009 I won the European air aerobatics championship, drawing the attention of the Red Bull Air Races organizers, who then invited me to compete in the challenger class.  Before you can actually partake in any races, you need a lot of train training. Throughout 2010 I went for several training camps. I was going to compete in the 2011 season, but the races were then halted for three years. Red Bull contacted me again in 2013 as they were gearing up to restart the tournament. I was invited to a training camp in Texas, where I was submitted to various tests. Apart from training for 1 week in a pylon track, we also had to undergo psychological testing and do group work. The pilots who passed this training were given a so called restricted super license to compete in the challenger class during the 2014 race season.

Can you tell us a bit more about the aircraft you fly during these races?

I fly an Extra 330LX with a single seat canopy in the race. The challenger class pilots share 3 identical airplanes. The Extra 330LX is a good airplane to fly in this track. In the master class the pilots all have their own race teams and fly their own aircraft, an Edge 540 or MXS.

During the race, the pilots need to fly through various gates, all with their own set of rules on how to go through them. Which one of the various gates would you say is the hardest to pass through?

The basic gates are not to hard to pass through, it’s what lies before and after the gate which makes it hard. First there’s the offset angle and distance. Then you have to calculate the wind drift, which is a large factor in every race. Everything goes very quick and there is little time to think. You need to have things figured out before entering the track.

The races take place all over the world from Abu Dhabi to Las Vegas. On this scale, the logistics must be huge. Do things go wrong from time to time?

The logistics with Red Bull are indeed very impressive. There’s a great team involved and thus far I never seen them fail in any way. They always make sure the race can take place, which earns them my respect. Depending on the time between the races we ship the material by boat or airfreight. Red Bull has been striving to make the process of moving all the equipment more efficient to lessen the impact on the environment.

You’re currently second in the challenger class tournament. Are you aiming to move to the master class next season?

Any favourite destinations during the world tour or during your appearances at air shows? And why exactly?

I like all places I go to in their own way. But to get to a new location and to fly at a new track is of course always a bit more interesting. Going to places I have never been to is a great feeling.

You’re involved with the Aviatrix Art project and fly the races with a custom helmet, promoting the projects message.

Yes I know some of the ladies who are working with the project. Earlier this year Susy and I started to talk about some different ideas on how I could promote their cause during the Red Bull air race series.  We decided on highlighting the Aviatrix Art project through my helmet and I’m very exited that we made this happen. I like the idea of helping out as I think Aviatrix Art is raising awareness to a very important topic. It’s a disease that can affect anybody at one point.

Thanks for this interview and best of luck with the coming race!