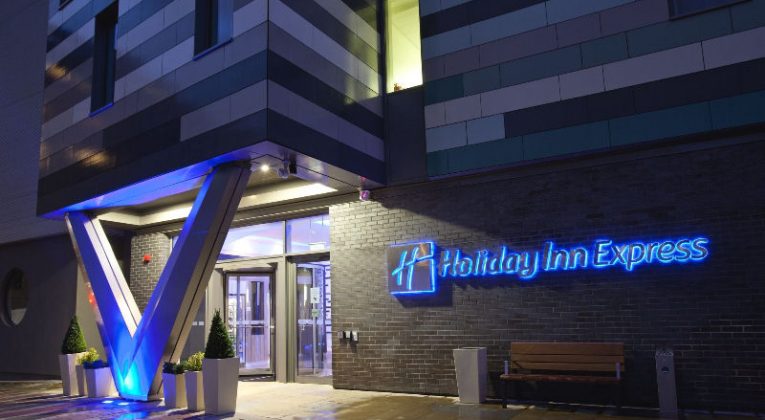 I had a one night stay in Manchester last weekend. My normal go-to place in Manchester is the Crowne Plaza, which is in the Northern Quarter.  Each time I’ve gone, I’ve always said I’d give the Holiday Inn Express a try, it’s literally right behind the CP, so this time I actually got around to giving it a go.

Getting There And Check In 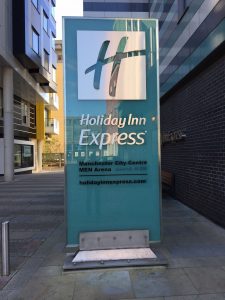 We’d had a morning  flight into Manchester airport, so were jumping into the taxi around 9:15am. There are several Holiday Inn /Holiday Inn Express hotels in Manchester, but only one Crowne Plaza in the city (theres one at the airport). So if your taxi driver looks a bit vague, just tell him it’s the one beside the city centre Crowne Plaza. If you are arriving by train, it’s a five-minute walk from Victoria train station and a couple of mins from Shudehill tram station. 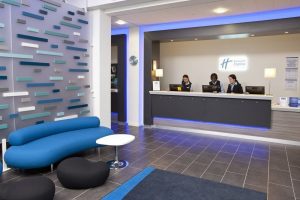 A 25 min taxi ride later, and we were walking into the hotel. I’d already prewarned Mrs Macky that we’d have to drop off our bags as it was far too early for a room to be ready. But to my surprise, the check-in agent told me he had a room on the fourth floor available. He welcomed me as a Platinum member, and offered either 300 points or a drinks voucher as a platinum amenity. I opted for the drinks voucher, and he kindly gave me two.

Whilst waiting for the keys, I noticed a sign on the desk that said breakfast was continental, but they also added 3 hot items (eggs, sausage and beans) . For those that don’t know, breakfast comes as standard in every Holiday Inn Express. It was great that they were going beyond the minimum requirement, but more about breakfast later.

There are two small lifts that service all the floors. At a squeeze you’d get about eight people into each. I could imagine that these lifts would struggle with demand at busy times such as breakfast. Anyhow, we got up to our 4th floor room, which faced out onto George street. 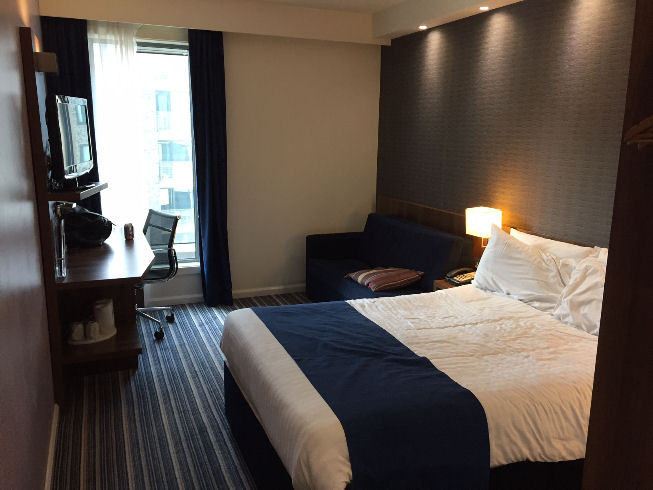 This hotel opened in 2011, but the corridors and room had a lovely new and fresh feel. I’d requested and received a room with a King bed. The room had a sofa in the corner, and an open plan wardrobe. There was a range of lighting options, but it failed the Macky challenge in that you couldn’t really light the room up brightly, which is a pet peeve of mine.

Tea/Coffee making facilities were provided, as was a TV with a good range of Freeview channels, but no Sky Sports. An air conditioner control panel on the wall provided a wide range of temp options, and it worked really well, although the fan got a bit loud on its highest setting. The room was very quiet and we slept well. 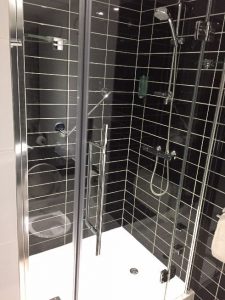 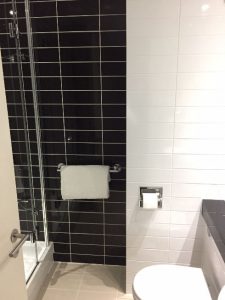 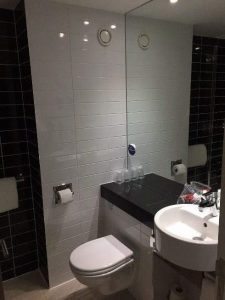 The bathroom was a really good size, with the shower cubicle in particular being impressively large. You could easily get a couple of people in there. The style and quality were much higher than I expected from a HIX, with good contrasting tiles and everything finished to a good standard. The dreaded wall mounted soap dispenser was the only thing to let it down, but even this was good quality. Plenty of good, soft towels were provided. It was a very well lit room, which is great for shaving etc. 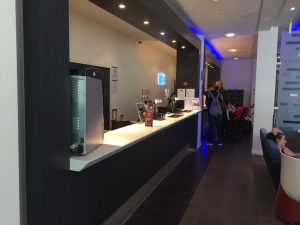 The common area acts as both the bar and the breakfast area. In the picture above you can see the bar, and just the beginnings of the soft seats. Unfortunately my other pics didn’t work out so well, so the follow is a stock picture of this area. 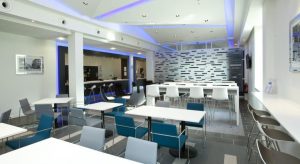 The soft seating area isn’t apparent above, but is beside the patterned divider at the rear of this picture. It was a decent enough place to sit for a while and have a few drinks, but clearly there are better places to socialise in Manchester. Again, like the room, the common areas all had a fresh, clean feel to them, they obviously work hard at keeping the place in good order.

Breakfast was from 7:30-10:30, and was a totally self-service affair. There was a good range of pastries, 3-4 cereals, yoghurt, and a somewhat limited range of fruit. Coffee was provided by excellent bean to cup machines, and there were several fruit juices on offer. As per the notice at reception, beans, sausages and scrambled egg were offered, and several bread toasting machines were available. Unfortunately the eggs tasted like powered egg had been used, but were still edible.

I found the Holiday Inn Express Manchester MEN Arena to be a really good option. It’s located on the edge of the Northern Quarter and thus has easy access to a lot of trendy restaurants and bars. It’s not as upmarket as the Crowne Plaza that I normal stay in, but was very comfortable none-the-less.  At 25K points instead of 35K (for the CP), and with the included breakfast, I think it is an excellent redemption option and would recommend you give it a go.