Starwood Preferred Guest (the loyalty programme for brands like Sheraton, Westin and St. Regis Hotels) calls its loyalty currency ‘Starpoints’ – and, to cut a long story short, Starpoints are amazing.

They are the most valuable Point/Mile issued by any of the major hotel/airline/credit card loyalty programmes, and are also incredibly flexible. You can read more about the SPG loyalty programme and Starpoints in our Introductory Guide.

The most obvious way to use Starpoints is to book Starwood hotels, and there are some great bargains to be had.

For example, the very pleasant looking Sheraton Dubrovnik Riviera Hotel is a Category 2, which means it only costs 3,000 Starpoints at the weekends (4,000 during the week), rather than~£115.00 (150 Euros) per night this Spring.

Closer to home, rates at the excellent Aloft Hotel in Liverpool are pretty expensive for Saturday nights this Summer (£150.00+), but again it’s a Category 2, so you can just use 3,000 Starpoints instead.

These might not be typical examples but they aren’t very hard to find either, and show that you can get 4-5 pence in value per Starpoint if you spend them wisely.

The main reason I love Starpoints though, is the ability to transfer them to a very wide selection of airline loyalty programmes at a rate of 1 Starpoint = 1 Mile/Avios. There is even a 5,000 Miles/Avios bonus when transferring blocks of 20,000 Starpoints.

This is, by far, the most generous transfer ratio from hotel Points to frequent flyer Miles offered by any of the major hotel programmes.

The range of frequent flyer programmes you can transfer to is exceptional (35 in total, including great value programmes like Virgin America Elevate and Alaska Airlines Mileage Plan, which are otherwise quite difficult to earn miles with, from the UK). All the usual suspects like American Airlines, BA, Singapore Airlines, KLM/Air France, Etihad etc, are also included.

That is more expensive than I would advise buying at, although you can see circumstances where it could make sense, like in the hotel examples above.

SPG are currently offering a 35% Discount when you buy 5,000+ Starpoints using this specific link.

This is, potentially, a fantastic deal!

I should point out that the 35% discount is only advertised to American SPG members who have an SPG Amex credit card –  but we tried a test purchase last night using the link above anyway and there was no problem at all – as you can see: 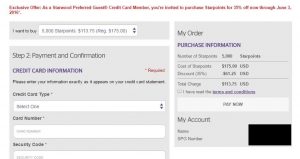 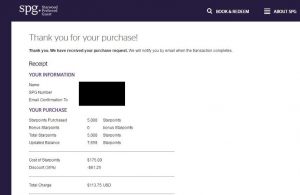 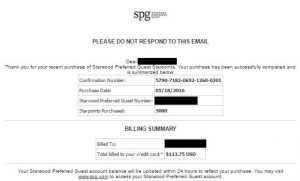 Ordinarily, I would say don’t be greedy!

With SPG though, there is actually a very simple way around the annual purchase limit.

Members have the ability to transfer Starpoints for free to any other member who has the same address on their account (addresses must match for at least 30 days before you transfer). The process is very simple, you can either ring customer services, or use the “Give Starpoints” link on this page.

This is a fantastic benefit in its own right, but in the context of this deal it’s even better.

Remember that if you are transferring Starpoints to airline Miles, you should do it in blocks of 20,000, so as to get the 5,000 Bonus Miles.

By purchasing the full 30,000 for yourself and another member of your household, you will have 60,000 Starpoints (which is 3 x 20,000 blocks of Starpoints), and would therefore get you 75,000 airline Miles of your choice!

That’s far too expensive for me to even consider buying Avios or Virgin Atlantic Flying Club Miles – but for some other Miles (like Virgin America Elevate or Alaska Mileage Plan) it can open up some incredible deals.

I’ll share some of those deals very soon, but for now I just wanted to keep things relatively simple and emphasise that this is the best deal for buying Starpoints that I have ever seen!