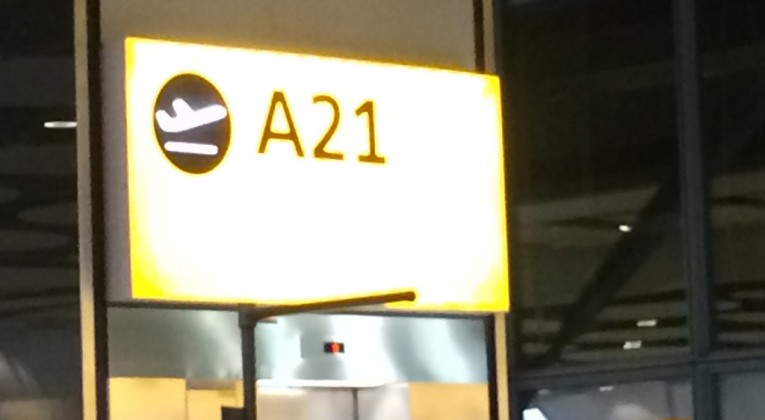 BA operates most of its flights from Terminal 5 at Heathrow. This is the newest terminal at LHR. I arrived at Terminal 5 early and used the North Security Checkpoint, entering through the Fast Track line. It took right to the far end of the security lines, and there were 10-15 people in line for the single machine working. I was able, with another passenger, to slip under a barrier to a non-Fast Track line where only three people were waiting.

About 5 minutes later I was through and assembling my belongings and off to the First  Class Lounge (BA Gold), at the complete opposite end of the terminal. I was not tempted to buy anything and so did not have to stop at the shops. The lounge was busy but I was able to find a seat, with a power socket and had some hot food.

After about an hour I left the lounge for the gate, which as I often find, was close to the lounge. Down the escalator I went…

and as it was a Friday afternoon the planes were pretty busy. Gate 21 was around the corner, just a 5 minute walk from the lounge.

BA has abolished the boarding pass check on board and so I was quickly in my seat, 1C. The Club cabin was pretty full but I was lucky to have the whole of row 1 to myself.

The seats were the new slim seats and the plane was brand new:

There was a moving map, and I have to say that the crew were lovely, coming round refreshing drinks despite a full flight in back. BA now allow small mobile devices to be used during take-off and landing, and so I could watch my iPad movie to the end.

Dinner was a cold salad with warm rolls:

But there was plenty of champagne to go round.

We arrived slightly early in Berlin Tegel and went to gate 5. Two minutes later I was through immigration and in to a cab. I will miss the simplicity of Tegel when it closes.

A perfectly standard BA flight with a nice crew made it go quickly.