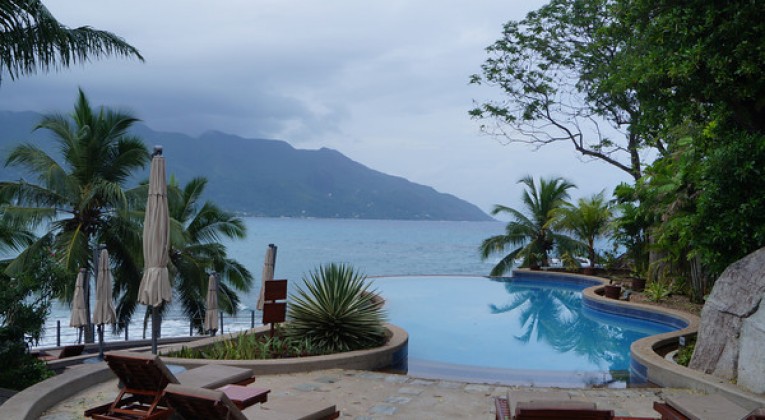 I had never been to the Seychelles before but a mistake fare gave me the chance for a short stay. I had one night in the Seychelles and did not want to venture to one of the islands and so had limited choices. I originally planned to use 95,000 Hilton HHonors points for a stay, but when they launched a sale around Christmas time, I opted for a revenue stay.

In advance of arrival I contacted the property about two issues – a late check-out and transportation from the airport. Both of these seemingly simple requests would turn out to be problems at this property. These problems are the reasons that still don’t know how I feel about the property. Certainly they are reasons I won’t ever return, but it’s hard to say that the actual stay was so bad as to warrant a bad revue. The late check-out (to 6pm) was offered at 50% of the paid nights fee. Having a flight at 8pm I had little choice.

After clearing Immigration and Customs at the airport I looked for my driver from the hotel who was nowhere to be seen. After 15 minutes I called the hotel who, it turned out, had sent him to meet the Emirates rather than the Ethiopian flight – ET and EK being too similar it seems. So, after much to’ing and frowing, he arrived about an hour after I arrived.

The property is located on the opposite side of the island from the hotel and he took the mountain road which provided some excellent views as well as some steep climbs.

On arrival at the property you are dropped off at an ‘Arrivals Pavilion’ where check-in is undertaken. I went over the late check-out issue and cleared up that the property had secured this by amending my reservation to show as two nights, but in fact was only one plus a late check-out.

The agent walked me to my room which had a superb view of the ocean.

The bed was decorated with a welcome, which was touching:

The room was decorated with dark wood:

The bathroom by contrast was bright and light – with a large jacuzzi bath and a large walk-in shower:

Views from the bath were over the terrace out to the ocean.

The terrace was large, with plenty of seating areas:

The next morning, after a sound nights sleep, I went for breakfast in the restaurant.

The grounds are well maintained:

The mountain rooms (the other room class from the ocean view rooms), were visible from the walkway:

On the way to Reception, you walk past the infinity pool, complete with decorated towels:

The Reception was large and airy with a very tropical feel:

Breakfast was in the Hilltop Restaurant up a small slope with a clear view of the water on all sides. The property provided breakfast a Hilton HHonors Gold which was pretty good of them in view of the cost.

The restaurant was not full and I was able to obtain a seat next to the window.

The food was set up at a number of stations, with a chef making omelettes to order, which I always like. I had a great view of the ocean breaking on the waves

Just below the restaurant was another terrace which overlooked the opposite side of the property from the hotel rooms.

The view from here was of the beach (such as it was), several rocks located off shore and provided a great place to watch the ocean.

When I checked-in the property had provided a voucher for an ‘Afternoon Tea’ free of charge which I used at the bar, just below Reception. Afternoon Tea consisted of a series of cakes and sandwiches and a drink – I had an iced latte.

This was a nice gesture.

When the time came I went to Reception to check-out and explained (again) the two night issue and so paid for one night and met the same driver as the previous day, and was off to the airport. There was no discussion at check-out about the late check-out fee and as the property was empty I didn’t think any more of this.

So a good stay at a property I might not have visited.

About week after I left, I received an email from the property asking me to pay for the second night. I wrote back explaining that I have never booked a second night and that this was done – by the property – in order to give me a late check-out. The property promptly charged me for the late check-out! Of course, as the folio had been issued there were no HHonors points or Virgin Miles for this charge. Whilst I accept that I agreed to the charge, at the point they decided not to charge it at check-out I didn’t expect to have to pay it. So, be warned, this property is both somewhat inefficient and equally tenacious. I probably won’t be back for this reason.