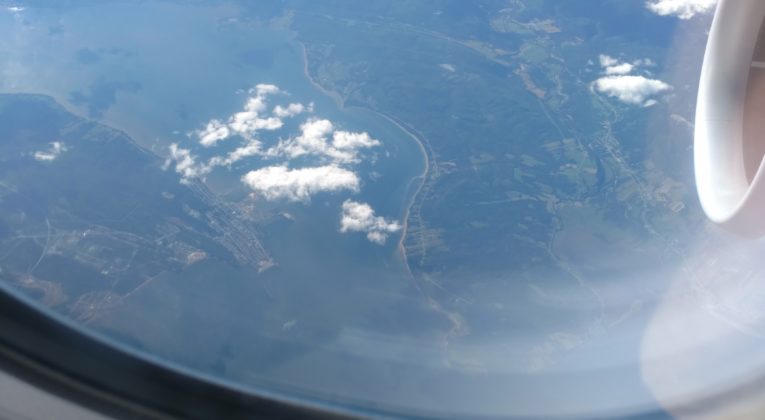 Good question! While it’s fashionable and sexy to talk about business and first class flights, we realise that isn’t within everyone’s reach (although it’s much closer if you pay attention to the tips on this site!).

Sometimes, you have to put all thoughts of mileage redemption charts, positioning flights and reward availability aside and if you see a cheap deal, just book it!

So, no stories of consuming bottles of vintage champagne, or lying out flat on the upper deck, but hopefully another perspective on travel to consider.

Following the booked hotel in Cape Verde not being built, the Perry family found ourselves short of a holiday earlier this year, which we found unacceptable. With some wonderful family in the Boston area, we often visit in the summer, so when we spotted some cheap Aer Lingus flights from Birmingham, we jumped at the chance of a relatively cheap holiday.

Bearing in mind this is summer holiday season…….

….. that’s a relative steal compared to the direct Heathrow flights with BA or Virgin, which previously have tended to hover around the £900 – £1,000 mark in July and August.

It was nice to select your seats at time of booking. We opted for exit row seats for my wife and I, which added another £132 to the total for the round trip transatlantic legs. It’s not that we are that mean, but there were only 2 exit row seats together, and our son was happy enough in a regular seat. We got the front of the economy cabin, looking past the curtain to the business cabin which was rather distressing! 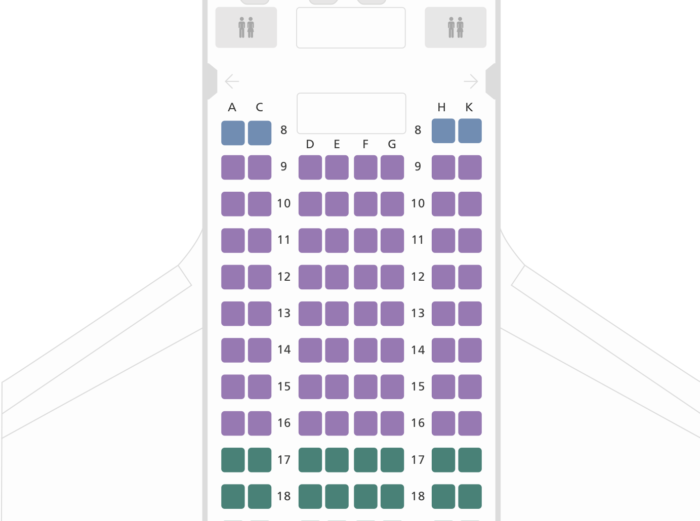 Aer Lingus run 4 variants of the A330 (click the image above to view all seat maps). We had front row on 2 variants on this trip. Having the bathroom just in front was useful, but the return leg was slightly different and meant we had to walk halfway towards the back to use the bathroom.

These were from Birmingham, via Dublin, which offered us some advantages;

There are downsides though;

As Aer Lingus’ home base, there’s a lot of green! The schedules are fairly well planned to cater for regional passengers transferring to transatlantic flights. We had a couple of hours, which was plenty of time to waltz through US Pre-Clearance (probably less than 10 minutes end-to-end) and get to the gate area. It was fairly crowded with a few US flights due out that afternoon, but we got a seat and grabbed some beers.

(There is a dedicated US Pre-Clearance lounge, but us peasants in economy were not welcome in there, and it is not accessible with Lounge Club.)

Well, there was considerably less champagne and gin & tonic involved than last year’s trip to Boston 🙁

The flight from Birmingham was slightly delayed. I got a notification on my phone from AwardWallet (which I wrote about here) which was a feature I didn’t even know AwardWallet had! The delay wasn’t going to put us at risk of missing the connection at Dublin, so we relaxed with our beer at Weatherspoon’s (we really were embracing the economy travel ethos). I don’t think my wife and son really appreciated the size of aircraft we had committed to for the ~ 1 hour flight to Dublin and were looking a little worried as we walked across the tarmac and climbed the step ladder to the back door of the ‘plane. I was most put out that I couldn’t even stand up straight in the aisle. Leg room, ironically was actually pretty good. After a flick through the magazine and a few minutes of staring at the back of the seat where proper planes have the IFE we were on approach to Dublin. Just over the airfield, and then go around. Great! No idea why, as the PA was not the best but we landed uneventfully on the next attempt.

Transatlantic On Board Experience 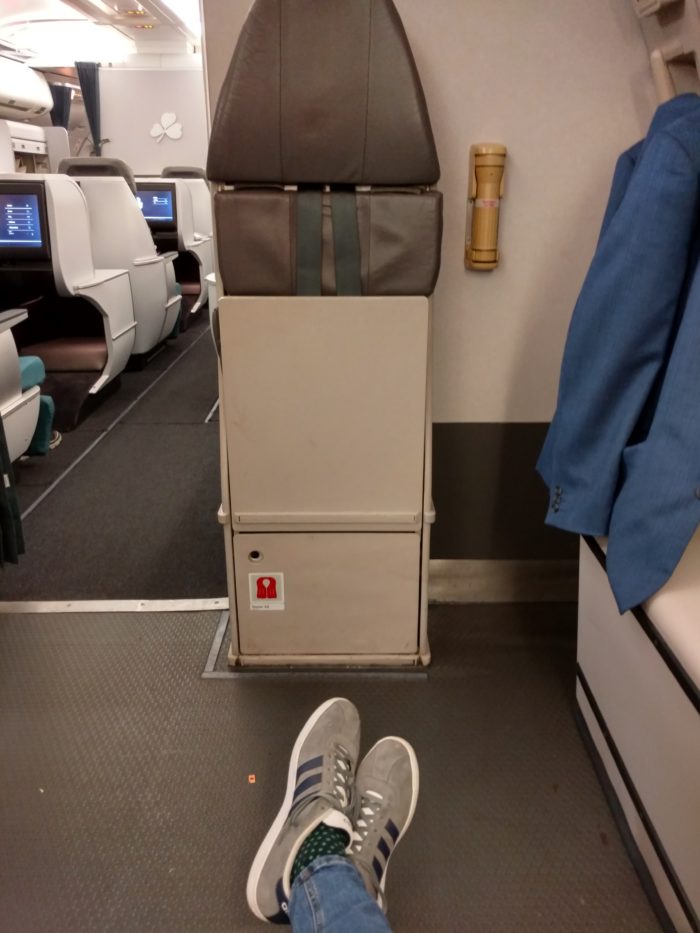 The interior of the plane did feel very plastic, and not particularly fresh. It’s hard to put my finger on specifically what it was, but it just didn’t feel particularly clean or comforting.

Food was average airline fare; edible but not inspiring. I didn’t get a photo of the ‘chicken-or-beef’ main meal, but it wasn’t very photogenic. I did capture the afternoon tea offering; 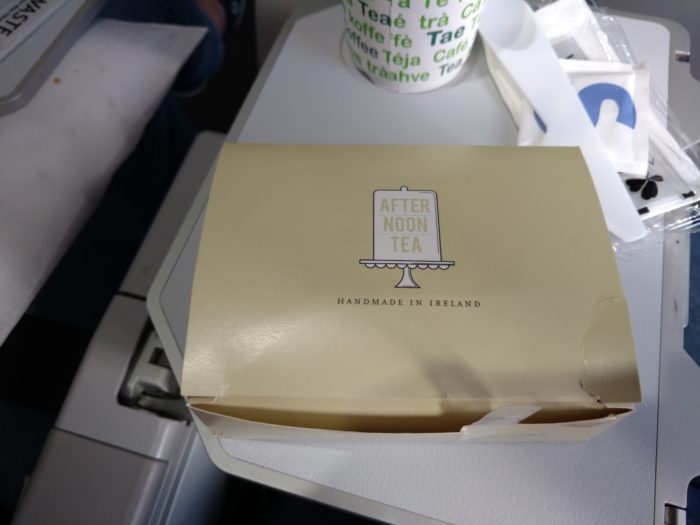 which consisted of a small wrap, and a very nice piece of cake, just not very well presented. 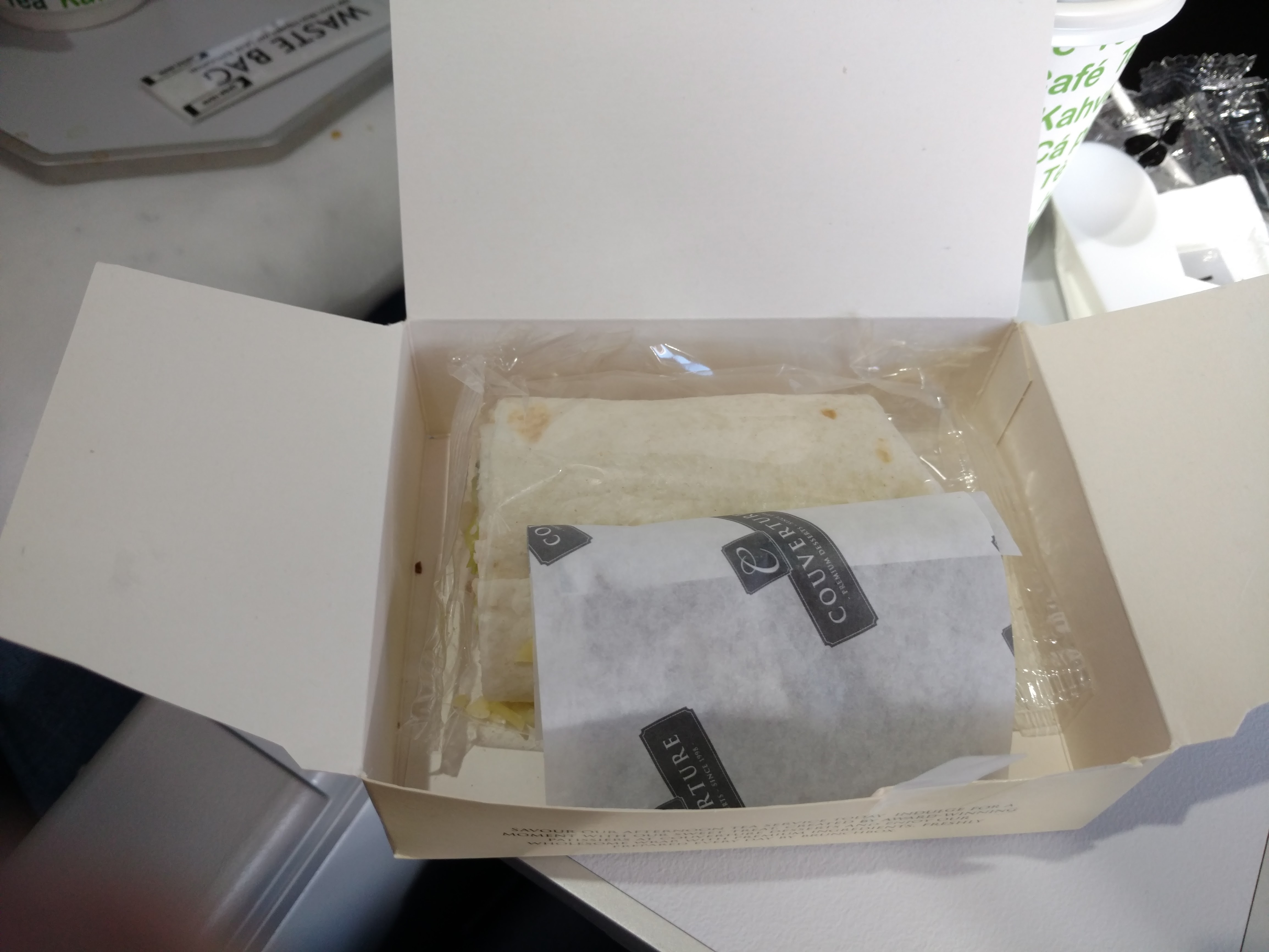 The food was included (we could have pre-ordered a premium meal for additional cost), as was tea and coffee and soft drinks. Alcoholic drinks were chargeable, but we decided to abstain and turn up in Boston sober for a change!

Lounge Club to the Rescue

Always the hardest part of the trip is leaving the family and heading back home. Thankfully, we still had 2 free lounge visits via my wife’s American Express Preferred Rewards Gold Card so decided to pass the time in The Lounge (that’s literally what it’s called). Anecdotally I’ve heard of folks not getting charged the £15 additional visit fee with Lounge Club, but I’m sorry to report that we did on the occasion. We did alright on the deal though!

It’s not a huge lounge, this is pretty much all the seating. 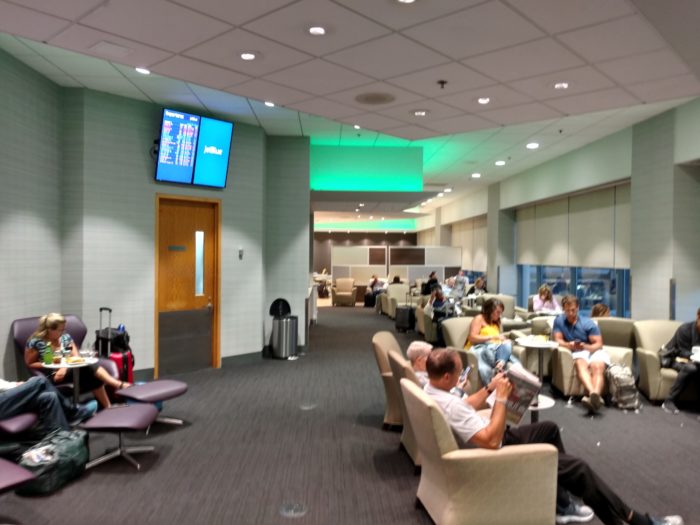 We managed to find a small table behind a very unstable, free-standing  dividing screen, which my son managed to knock over walking past it. 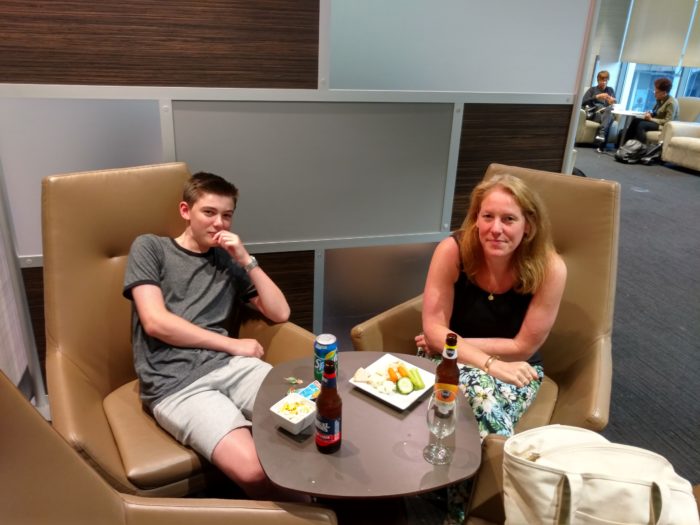 Food selection was much more ‘snack’ than meal; 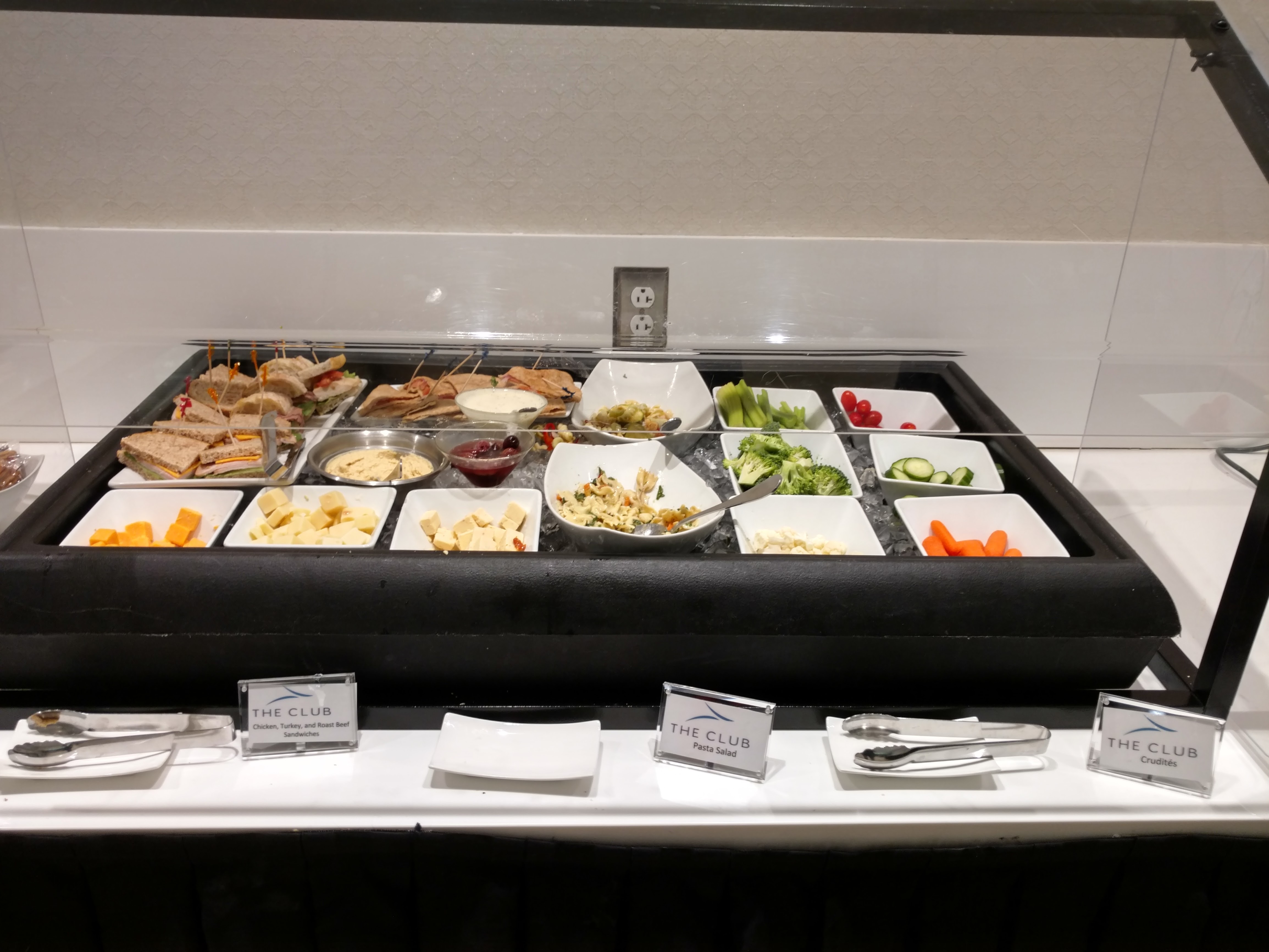 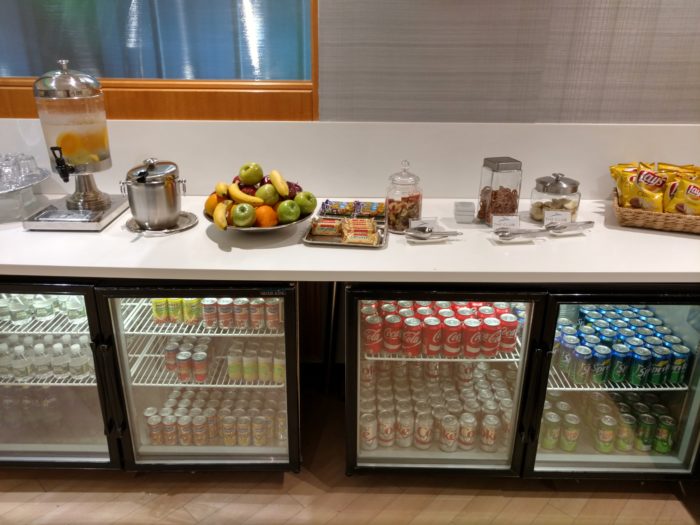 I went for something fairly healthy; 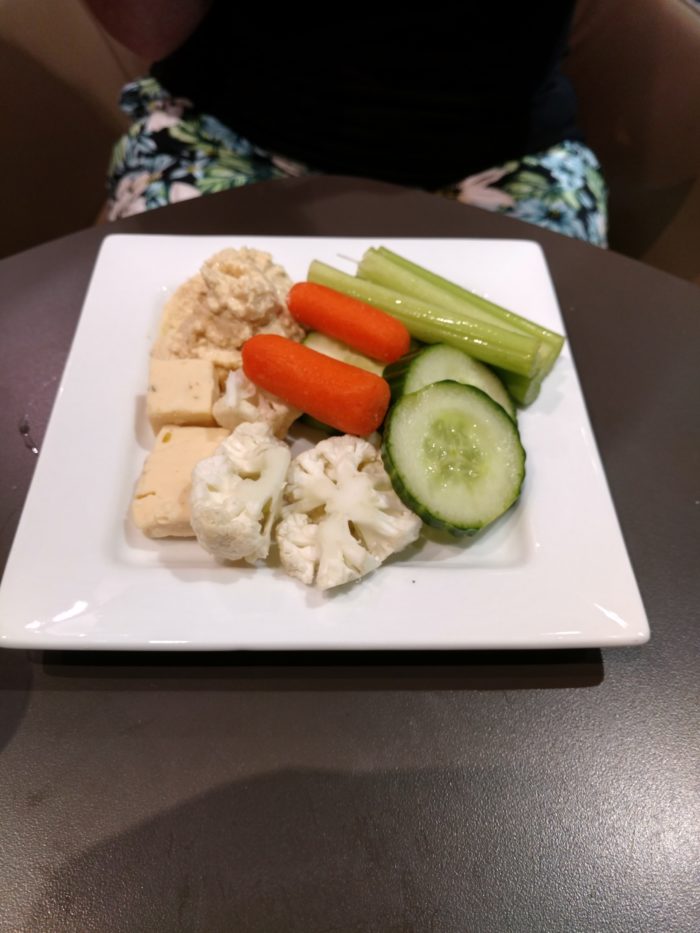 The bar was attended (apart from when I took this picture and she’d dissappeared) and had a fairly standard choice of a few beers (Sam Adams, of course!), a couple of wines and all the usual spirits and mixers. 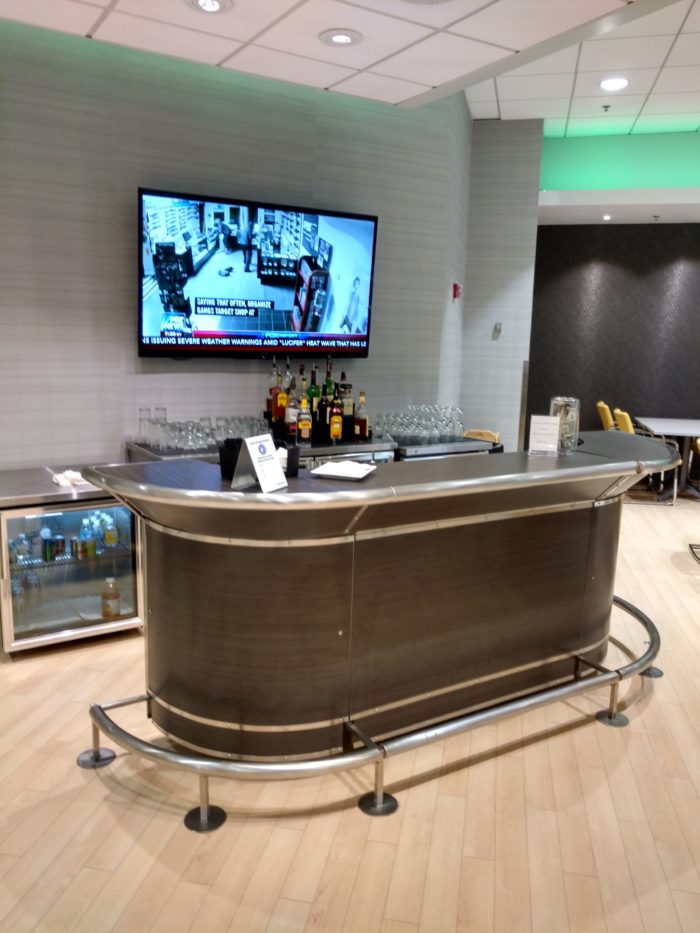 Would we do it again?

This was a very different trip to our usual Boston flights in many ways, so which of these changes would we keep

So that’s a 6-3 to BAD points, which probably reflects our feelings on it. If you view it as transport only, it’s OK, and if you can sleep well on planes (I can’t) then you’d have been much happier with it all than me. Having lounge access via Lounge Club made quite a difference, but I wouldn’t rush back to this sort of trip.

* If you forget your clear liquids bag, Birmingham Airport will sell you one for £1 via a vending machine; how thoughtful of them!

Can it be ‘Travel Hacked’ better?

There are a few options, each with their own setback

Looking at 2 weeks next August, BHX-DUB-BOS and return for 3

We can improve on this by redeeming for DUB-BOS only for 120,000 Avios + £539.10. This saves UK Air Passenger Duty, but we need to get to Dublin. This can be had cheaply with many options from UK regional airports with a  choice of low cost airlines. The issue here is you need to reclaim your bags and check them in again in Dublin, and delays on connecting flights are your problem. Not really an option for a family holiday, but maybe for a solo travel hacker?

You could, of course, spend a day or two in Dublin at either end to extend your holiday, but again, that’s not for everyone.

The savings in APD are much more noticeable on Business Class redemptions, but that wasn’t the point of this article.