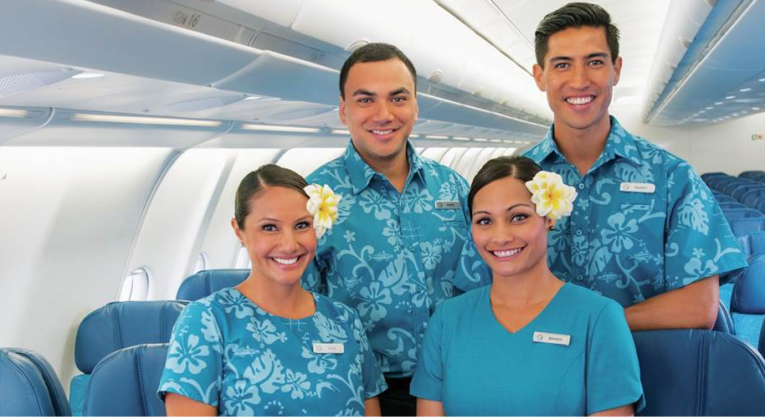 Having too long to plan a trip isn’t a good thing for my decision making.

Given how far out we booked our Avios redemption to the West Coast, I made numerous changes to our itinerary as our plans changed and we had new ideas. One of these (rather major) changes, was to decide we didn’t want to drive between LA and San Francisco. So I started looking at flights… And then someone at work joked about going to Hawaii whilst we were “over that way”.

So off the back of that joke, here is my review of Hawaiian Airlines, Los Angeles to Honolulu!

Before I get into the detail of the trip – obviously an important thing for InsideFlyer is crediting the Frequent Flyer miles.

You can credit to Hawaiian’s own HawaiianMiles programme – but if you’re UK based I’m guessing chances are slim you’ll be making regular trips with Hawaiian. Instead – you will need to look to their partner airlines.

The three key partners for flights from the mainland USA are American Airlines, Delta and Virgin Atlantic.

I chose to credit to Virgin Atlantic, by submitting a missing miles claim by email after our trip as I booked online rather than over the phone. A key point – you need to submit both your booking confirmation AND boarding pass to make a claim this way – so hang onto them!

Our flight from LAX to HNL was in a Standard Economy fare class, earning 2553 Flying Club miles each.

Check In and Security

I checked in online for our flights and printed our boarding passes. At the airport, this allowed us to bypass the check in kiosks and head straight for bag drop.

Two things that were different about flying with a US Airline, which seems not to be specific to Hawaiian:

Standard rates on Hawaiian are $25 for the first bag, and $35 for the second, and $100 for the third bag onwards on Economy tickets for domestic flights, with a 23kg/50lb weight limit and:

This led to an interesting visit to the Debenhams luggage department where we measured every single bag in the shop (turns out the stated dimensions are actually overstated on most bags!) – during which we discovered the majority of “large” cases on sale were over this limit, by around 5-10cm.

Now, some may choose to risk it hoping the airline won’t notice an extra few cm at check-in. However, with both AA and Hawaiian having this limit stated on their websites, and threatening fines of $200/bag (AA) or $100/bag (Hawaiian) each way, we decided it was better to buy 2 medium bags each and pay the additional 2nd bag fee, than risk potentially $600 in oversize fees.

Anyway – back to the airport experience! Bag Drop at LAX was quiet and were served immediately, and handed new paper boarding cards to replace our printouts. We then went through to Security, which I have to say was horrible.

Now, airport security is never a pleasant experience, but the LAX T2 security area is depressing. The general environment feels old and tired. The fast-track lane for premium passengers just jumps the standard queue to the initial boarding pass checkpoint, before merging into the general queues for the scanners. The agent on duty was letting all premium passengers through immediately which resulted in the standard queue hardly moving – great for the premium passengers but frustrating when you’re not one of them! Even though it seemed a relatively quiet Sunday morning, it still took us 45mins to get through security. 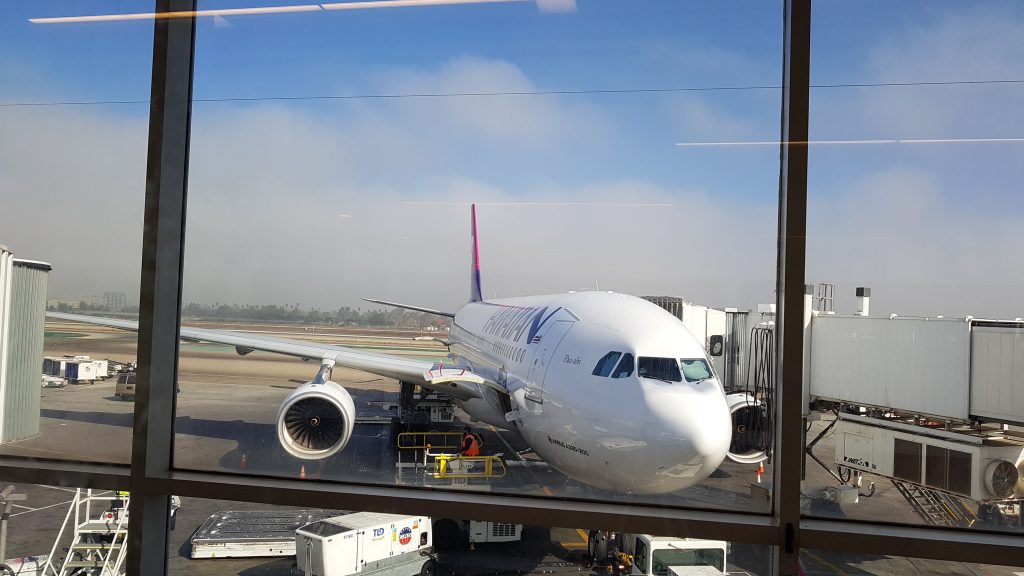 Our flight was departing from Gate 28 at the far end of the terminal building, and we would be flying on one of Hawaiian’s Airbus A330s which is part of their “new” fleet which began to replace their old Boeing 767s in 2010.

Hawaiian boards in “Groups” which is printed on your boarding pass, generally filling up the plane from the back. Boarding was slightly chaotic due to the lack of room near the gate as the terminal is quite small, however this is not the airline’s fault, and was completed very quickly despite the flight being full.

Once on board we made our way back to our seats 36A and 36B. The standard layout on the A330 is 2-4-2, which is great for couples as you avoid the awkward stranger situations that 3-3-3 layouts can result in.

Being a relatively new plane, the cabin was clean and felt spacious; however I think the bright tropical colour Hawaiian use for their seats really give it an extra lift, and convey the “Aloha spirit”.

Economy seats have 31-32″ pitch which is typical of a US Airline, and is similar to many longhaul seat pitches, and I found to be plenty of room.

Another positive is that the armrests in non-bulkhead seats were adjustable, so you can raise them to make getting in/out easier, or just to make a little more room (assuming the person next to you is comfortable with that!) 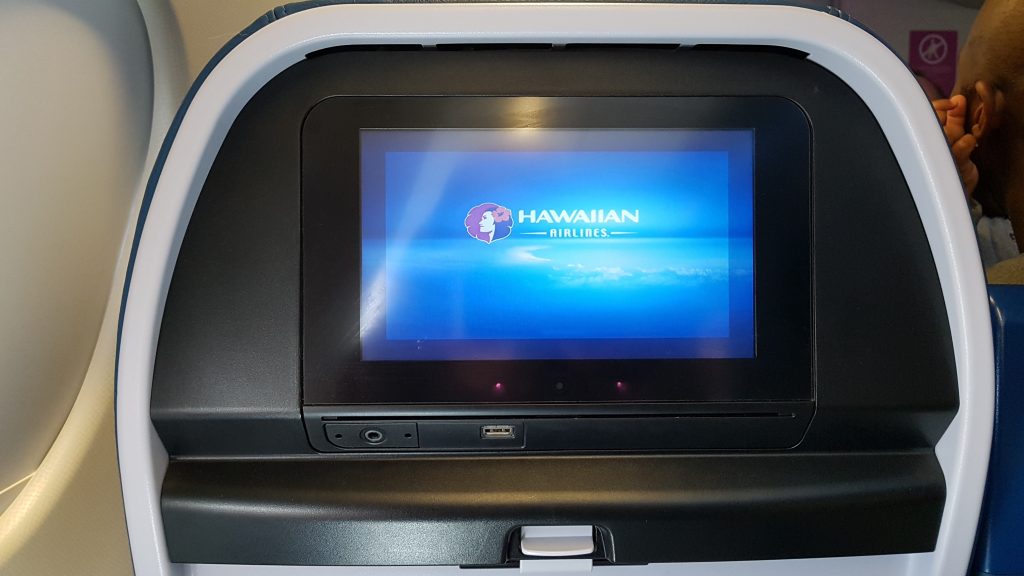 Every seat is equipped with a personal LCD touchscreen, with USB charging port.

However – very limited IFE is free in standard Economy on domestic flights, only a couple of channels showing cultural shows about Hawaii. An unlimited TV & classic movies pack is $6.99, blockbuster movies are $7.99 each, and there is the Keiki Children’s pack for $4.99.

Irritatingly, even after paying, there were still adverts before and during the TV programmes (God bless American capitalism!).

Hawaiian Airlines do not accept any cash on board, only credit or debit cards. Entertainment packs are purchased by swiping your card in the slot at the base of the screen.

Shortly after take off the crew commenced drinks service. In Economy passengers were offered a choice of soft drinks, I chose POG which is Hawaii is famous for, a mix of Passion Fruit, Orange and Guava juice – which is … interesting! They also gave out a savoury nut/pretzel mix called Pau Hana Snack Mix which is Hawaiian for “after work”.

Hawaiian airlines serves a complimentary meal in-flight, which according to their cheerful in-flight announcements is unique for a US airline.

Not only do they serve a meal in Economy, they also include a glass of red or white wine for passengers over 21. Whilst not gourmet, and there was no choice, the pasta dish was really tasty and filling for lunch, and had a nice cookie with it (cookies are huge in Hawaii).

We passed the rest of the time listening to music and watching TV (noise cancelling headphones are a must – there were a lot of young children on this flight!) Before we knew it, we were over the Hawaiian islands, with amazing views of Diamond Head and Waikiki as we flew over to make a turn to land at Honolulu.

Hawaiian really do come across as an airline that cares about making their passengers feel welcome and showing traditional Hawaiian hospitality. The staff were really friendly and seemed proud of their product.

Their fleet is modern, their on-board product is great quality, and their on-time performance is excellent. The seats had good quality IFE, there were plenty of toilets, they served a meal and complimentary drinks – you really couldn’t ask for more for a medium-haul economy product.