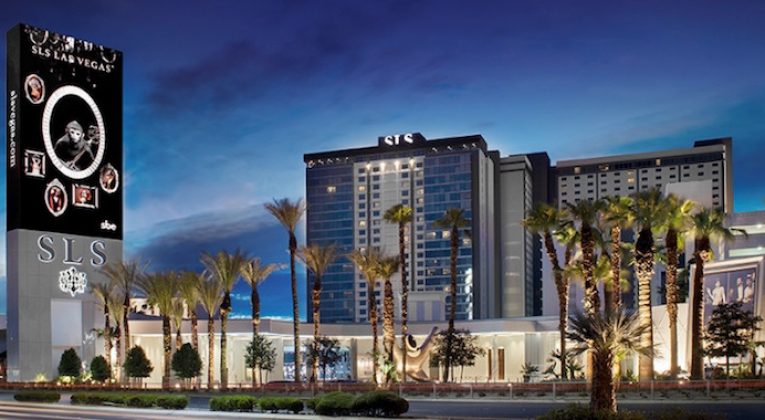 This was our first trip to Vegas, and we were unsure what we would make of it. We decided to choose a hotel on the edge of The Strip, so we were close enough to the “crazy”, but not in the thick of it.

The SLS seemed to offer everything we wanted.

Initially I booked through lowcostholidays.com – getting an obviously too-good-to-be-true rate, however following their collapse (and a refund from American Express – PHEW), the hotel offered me 30% off the standard rate + $100 beverage credit when I emailed them directly to re-book.

The hotel were really helpful when I contacted them via email with various queries before our stay about the booking, and the concierge also gave me really good recommendations for local tour operators.

The SLS is located on the site of the old Sahara hotel & casino which closed in 2011, with the SLS opening in 2014. Despite it being open just over 2 years, you might still find references to the Sahara in GPS or mapping apps.

The SLS is at the far northern end of The Strip, just before Stratosphere. It is a little out on a limb if you’re walking, as the adjacent lots are currently empty and being redeveloped.

There is a 7/11 and McDonalds just across the road, where we saw some… interesting sights. However we felt very safe within the hotel complex, and it may have just been us not being used to the “normal” sights of the Las Vegas Strip!

But hey – WHO WALKS IN VEGAS!? It’s way too hot. There is a monorail station attached to the hotel which you can catch all the way down to the MGM Grand in about 15 minutes, and there is very little traffic outside the hotel so it’s really easy to get a taxi/Uber/Lyft at either the Hotel or Casino entrances, and be down in the centre of the action in between 10 and 25mins depending on traffic, and under $10 in an Uber/Lyft.

The location is reflected in the prices – the room rates are cheaper than you would pay at more central hotels, and the buy-in rates at the tables in the casino are also lower even on weekend nights.

If you’re a Las Vegas party animal and want to be in the centre of the action – don’t stay here. If you prefer a more relaxed approach to Vegas, you’ve hired a car and want to get in/out easily with less traffic, or are looking for cheaper room rates; it’s a good location for you.

We arrived at around 4:30pm, being dropped off at the Casino/Front entrance. Luckily there were bellmen waiting, as lugging 4 cases through the casino would be a nightmare. If you either have limited mobility, or don’t want to use the luggage service, ask to be dropped at the rear “Hotel” entrance.

Making our way to the check-in desks there was no queue and we were served immediately.

The agent was friendly and efficient – we were all done in less than 5 minutes without hassle. Perfect after just getting off a 10 hour flight and spending an hour queuing at immigration!

No upgrade, complimentary or paid was offered at check in. I didn’t try “tipping” the agent for an upgrade as some may suggest doing in Las Vegas – I was happy with the room I’d booked, as it was just somewhere to sleep.

I also have no status with SPG, so I wasn’t expecting anything. Anecdotally – SPG Platinum members have reported good success rates of being upgraded to the Lux Tower suites.

We had booked a King room in the “World Tower”. There are three towers at the SLS, the Story, World and Lux.

Going by the official SLS website – the Story Tower appears to be the standard rooms targeted at the “party” crowd. It has the smallest rooms at 325sq ft; but with room rates that include “$200 worth” of minibar beverages and snacks, Night and Day club VIP access, and a “a multi-use sink serves as the perfect makeup station or wet bar.” (Not sure why you’d need a sink for your makeup, I imagine it works better dry generally…!?). The “Shower Alcove”and “Bathroom Alcove” also opens straight into the room unless hidden by a sliding mirror – so best to share with someone you feel happy showering in front of! There are also Suite rooms in this tower, which are 440-675sq ft.

The Lux Tower is “all-suite”, with rooms ranging from 322-955sq ft, and has its own speciality in-room dining menu, and added “amenities” such as SLS Slippers, dual sinks and bathroom scales…! This tower is due to become a “W” branded “hotel within a hotel” in December 2016, so not sure what this will mean for SPG upgrades.

The World Tower is the “Goldilocks” tower for us – less “party” and slightly bigger rooms than the Story tower, but not as expensive as the Lux tower. Standard Kings are 360sq ft, although there are one bedroom suite rooms which range between 440-730sq ft and have an oversize bath rather than just a shower.

I appear to have photographed EVERYTHING in our room, except the bed and desk. So here is a photo from the official website:

This is actually an accurate representation of our room. The large mirrors are on both walls creating an “infinity” effect, with cool lights around the edges. These also serve as the rooms “main lights” however. This means the room can be a little dark, and you have to get out of bed to turn them off.

Opposite the bed there is a 55″ LED TV above a quirky styled desk with cartoon map of Las Vegas. There were power outlets on the desk, and the bedside table on the right hand side. There was also a wall outlet on the left hand side of the bed.

There was a distinct lack of storage space – which resulted in us living with two cases lined up along each side wall and keeping everything in them. I would have liked a few drawers to at least store some things in for the 5 days we were there, or at least a proper space to fit suitcases in rather than just budged up against the wall.

This is the view from our room window – overlooking the rear hotel entrance, car park, and the monorail: 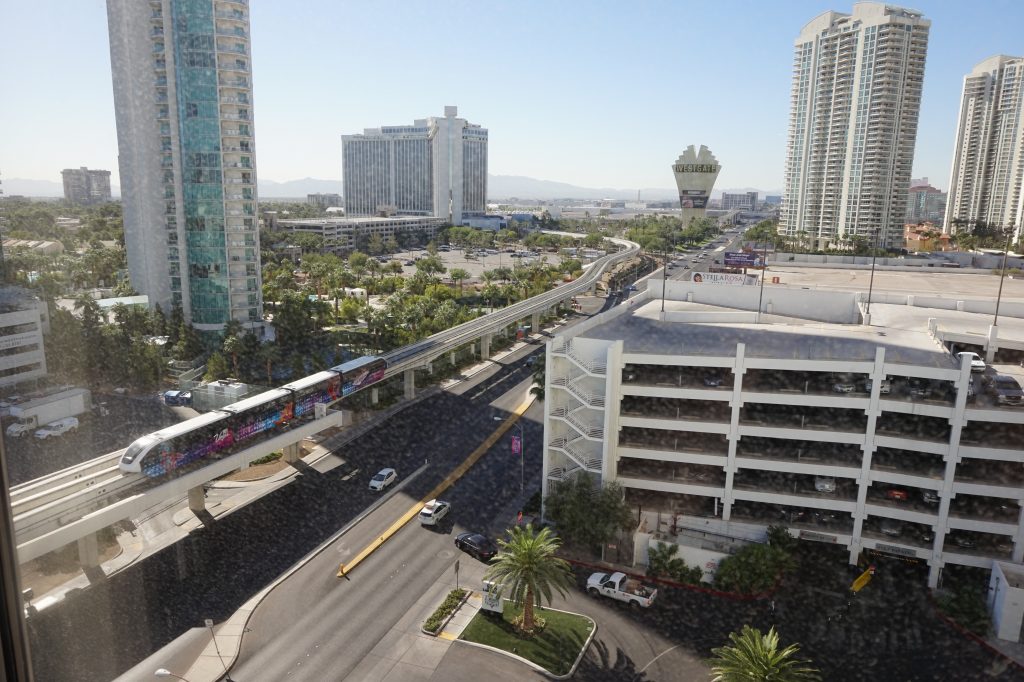 Interestingly the window in our room actually OPENED – only a small amount, but gives an option for a bit of fresh air if you want: 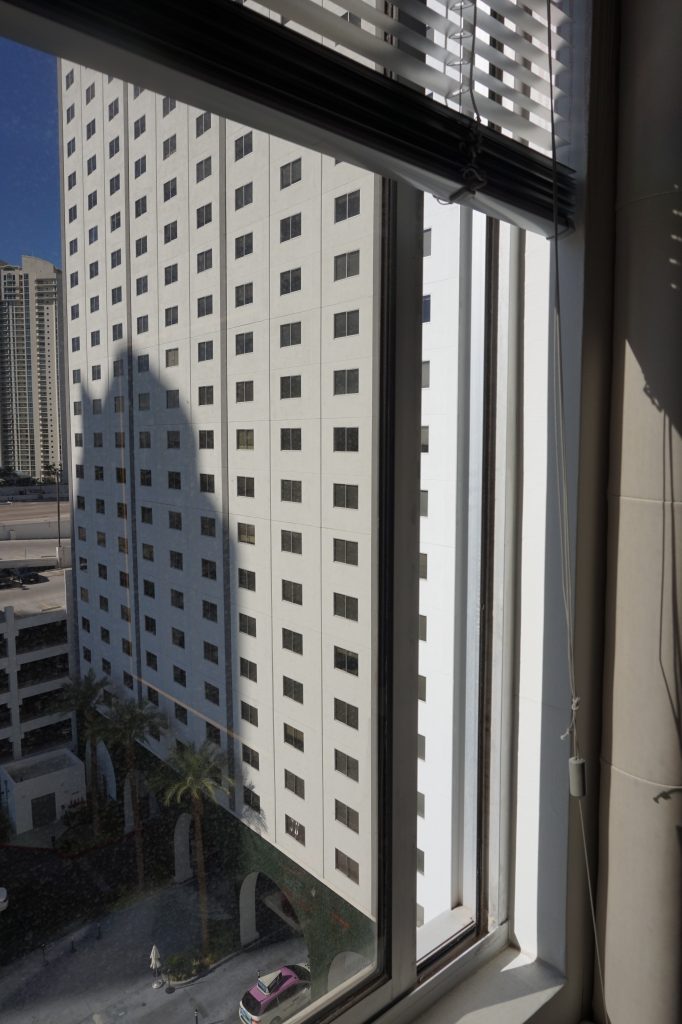 As you enter the room, there is an open wardrobe alcove: 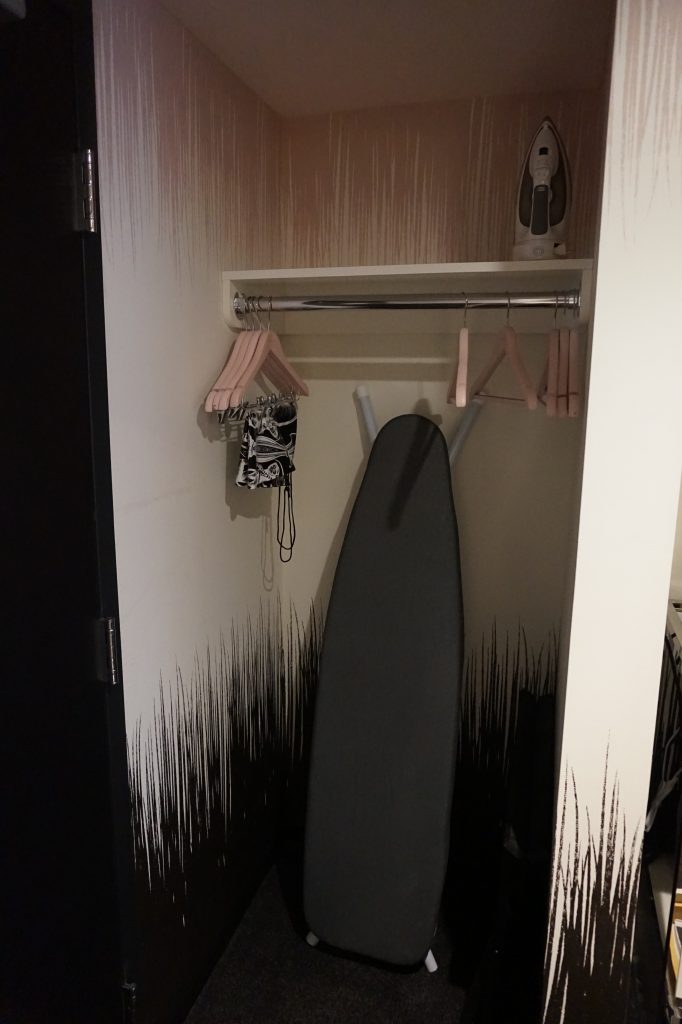 And further on the right is the bathroom, which consists of a large shower enclosure: 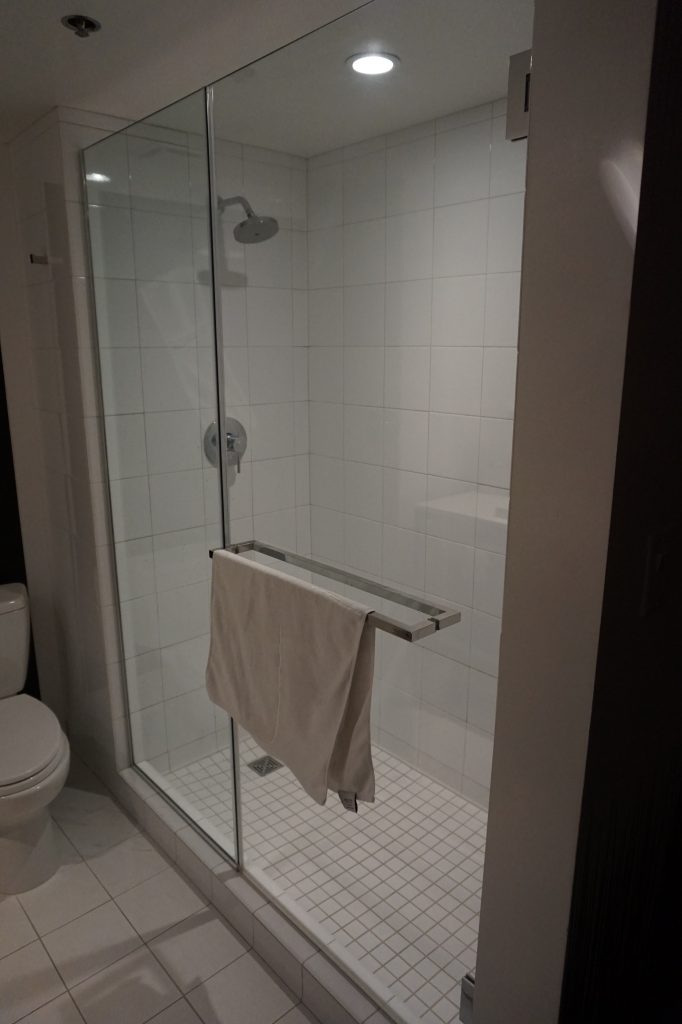 Water pressure was good, and there was loads of room in the enclosure.

There was also a toilet and single sink: 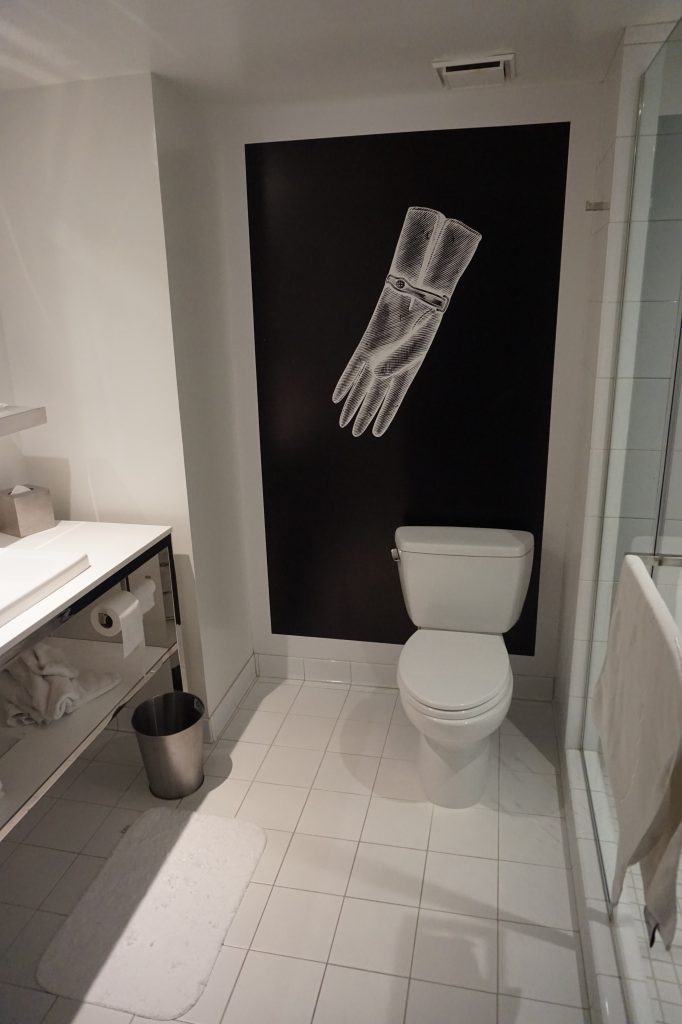 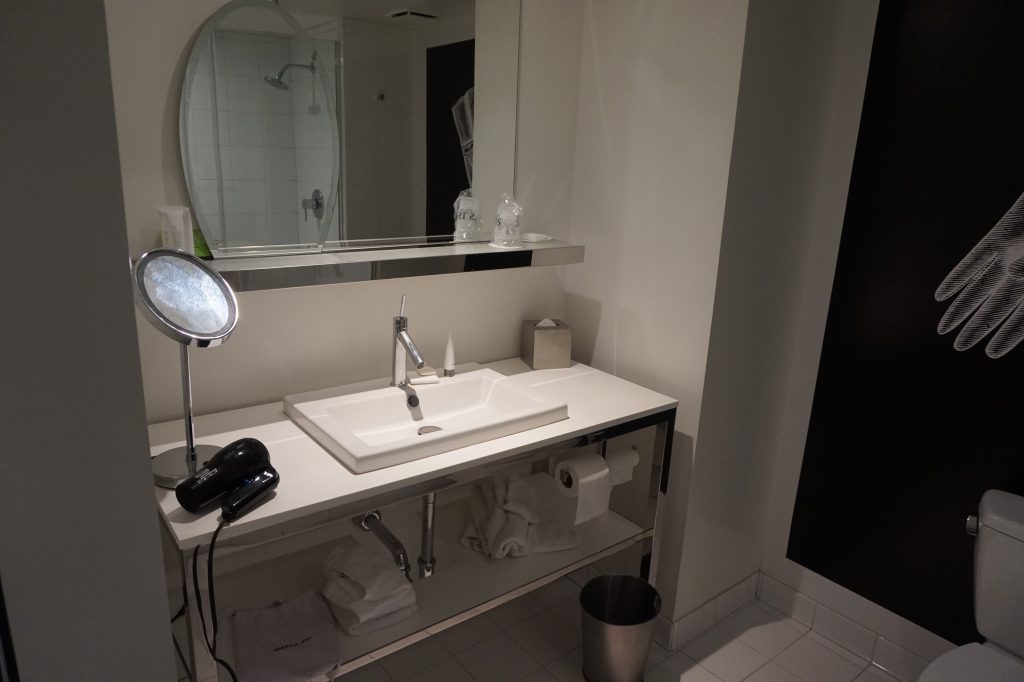 The provided toiletries were nice – but nothing to write home about. The sink was very shallow and didn’t seem to have a plug which you could shut which meant we had to shave with running water which felt a bit wasteful. There was also one of those light-up magnifying mirrors which highlight every pore and imperfection… just to cheer you up 🙂

The hair dryer provided was adequate – although it felt odd plugging in an appliance in the bathroom!

The bathroom had a large sliding mirror panel for a door: 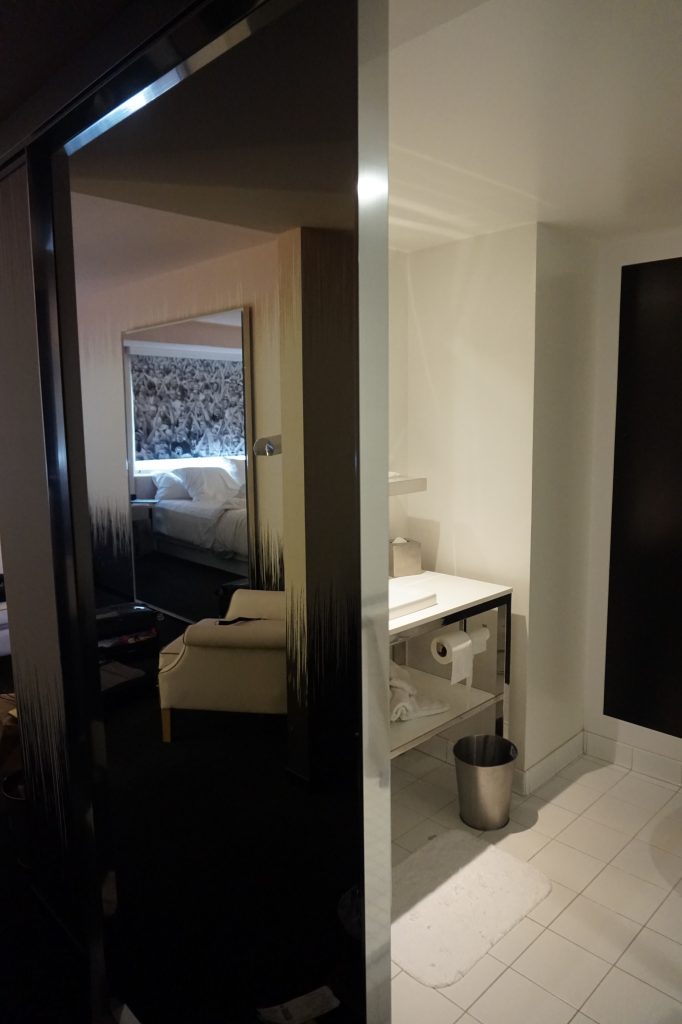 Opposite the bathroom just past the wardrobe alcove was the minibar, which is PRICEY (quelle surprise?), storage shelves and safe. 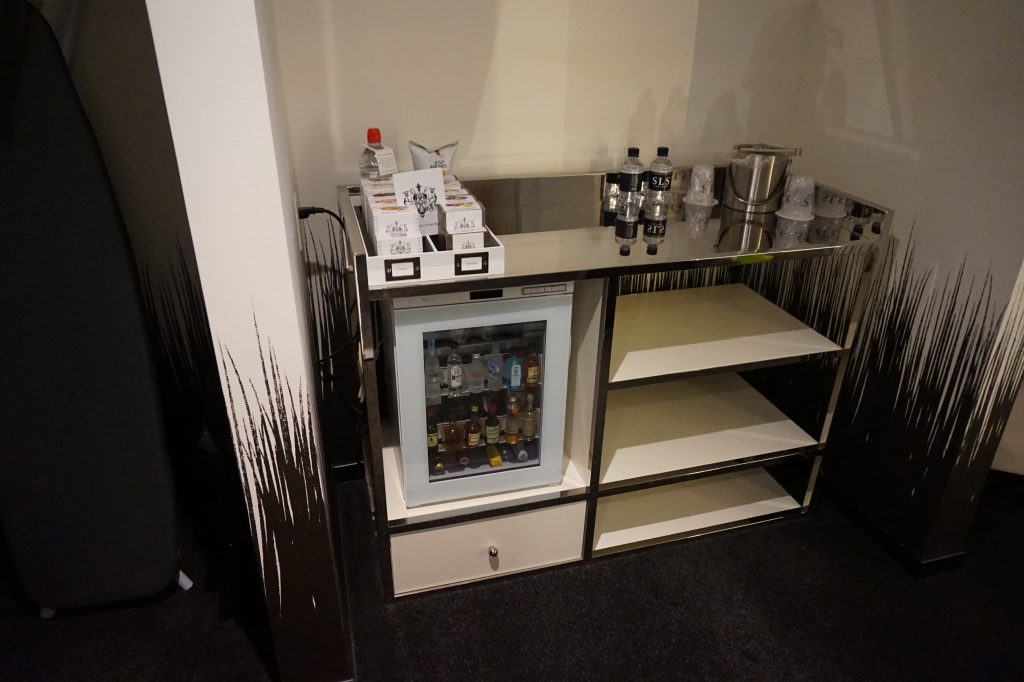 The hotel provides two bottles of complimentary SLS Filtered Water each day, and there is an ice machine on each floor for your ice bucket.

The minibar is computerised, and will charge your room automatically if  anything is removed for more than 30 seconds – including the snack tray! There is no space in the mini-bar for personal items.

The snacks (and “Sexy Little Sachet – Intimacy Kit” – which I assume you don’t eat…!) are divided into “Saints” and “Sinners” Ranges: 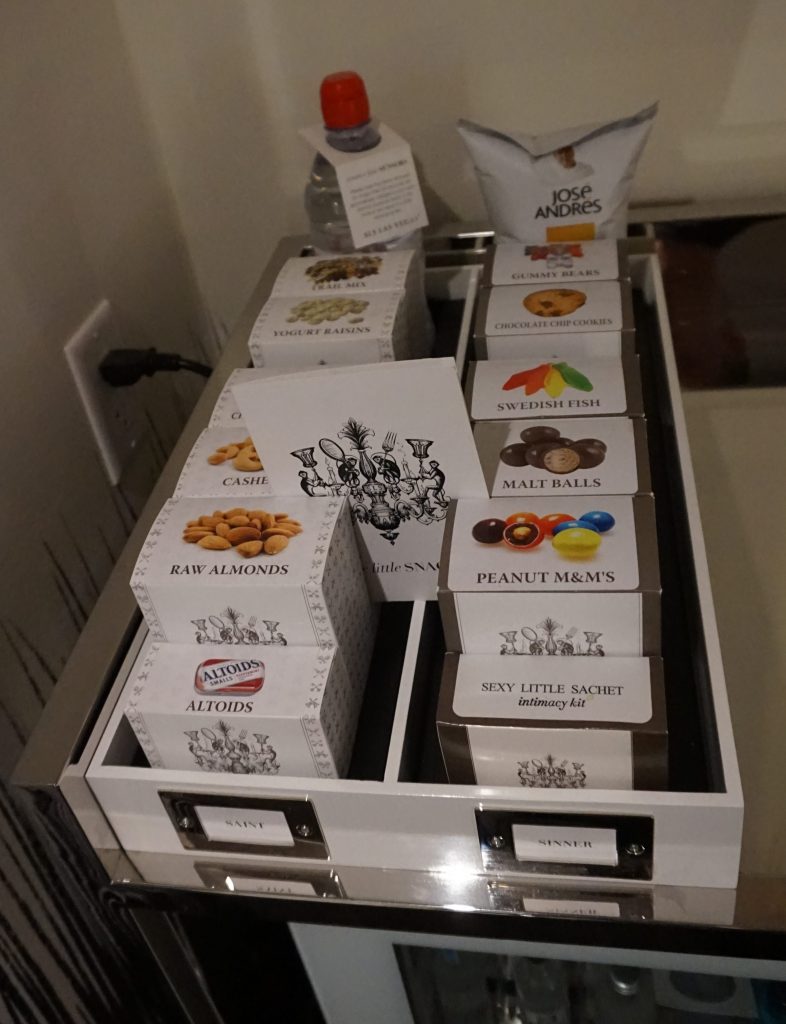 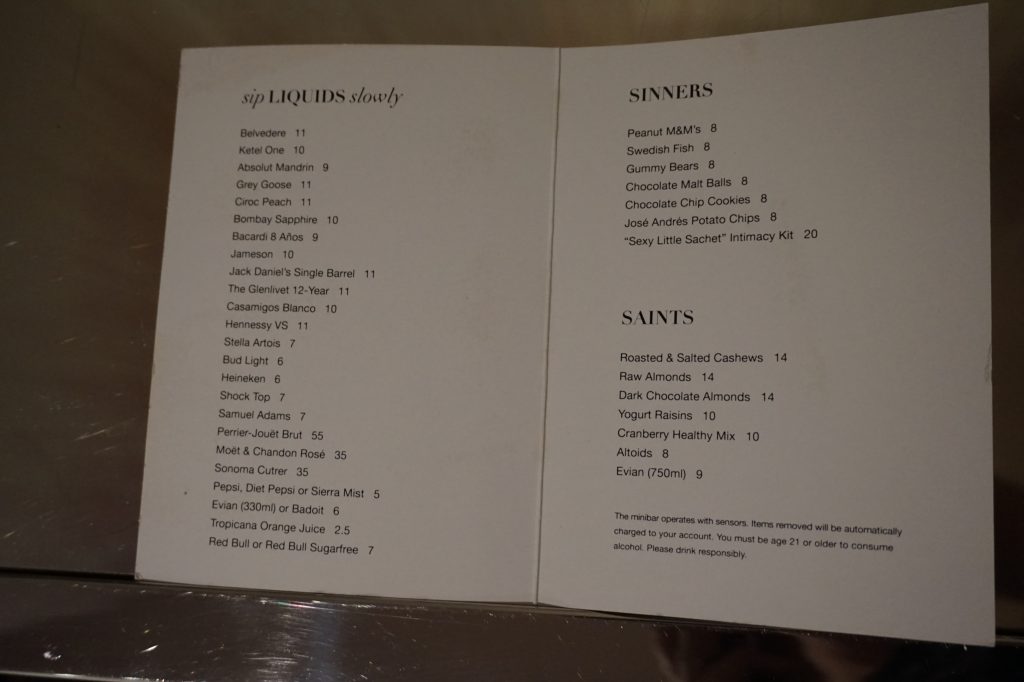 In the bottom drawer was the in-room safe which you set your own 4 digit code for each time you closed it. There was plenty of room for our assorted electronic paraphernalia and important documents: 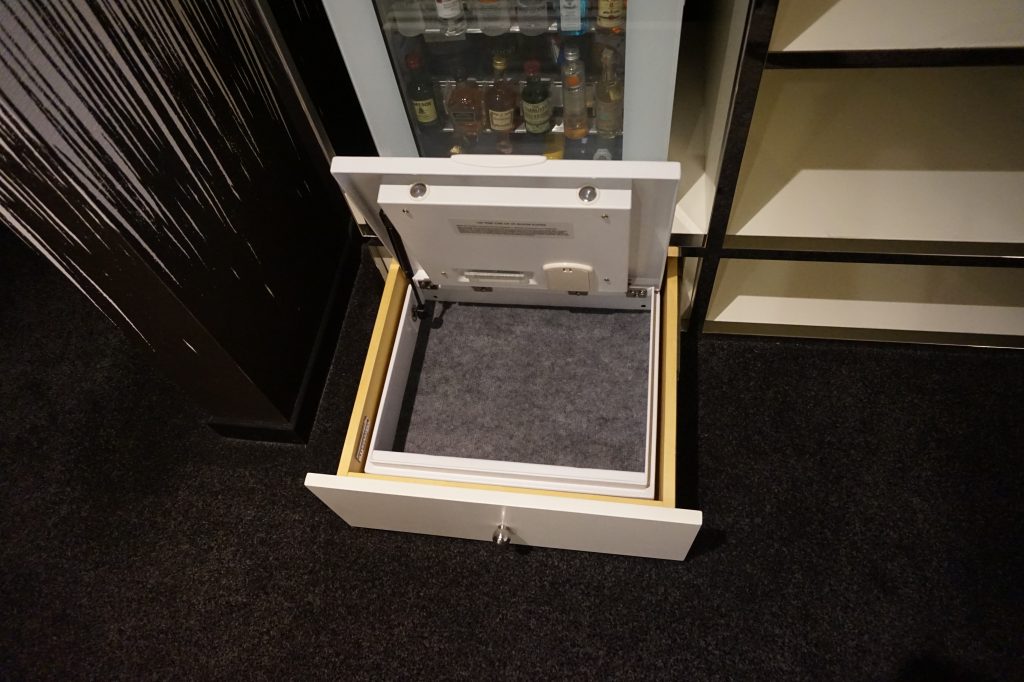 The SLS boasts proudly about being named “Las Vegas’ hottest hotel for foodies” by Forbes Travel. There are 7 eateries on site, plus in-room dining options from most of them. We ate on site three times, once using In-Room Dining, once for breakfast at Northside Café & Chinese Kitchen and once for takeaway pizza from 800 Degrees.

The quality of the food was really good – the in-room dining menu is essentially anything from the menus of the Northside Café & Chinese Kitchen or 800 Degrees Pizzeria, just they bring it to you for a $10 tray charge + 15% service fee + tip, if you’re too lazy/tired to walk downstairs and eat there!

As it’s the Vegas Strip, the prices in the hotel were naturally higher than if you went outside or off the Strip, but the quality was good so I didn’t mind so much. Obviously I charged it all to my room to get extra SPG Points!

As this is a Vegas hotel – there are also 3 nightclubs/entertainment venues on site, 2 bars and 2 pools which host various events. Full details can be found on the SLS website.

We didn’t venture into any of the clubs or even use the pool as I had organised far too many other activities, but the pool area never seemed to get crowded and also didn’t require additional entry fees during the day as is the case with some Vegas hotels.

The bars were reasonably priced – we only used $60 of our $100 beverage credit during our 5 night stay. Cocktails were around $12, bottled beer was $6. However – if you were gambling there were plenty of waitresses roaming the floors to keep you topped up with complimentary drinks.

This was offered after contacting the hotel directly by email, after losing my Lowcostholidays.com reservation due to them going bust.

The SLS offers a quirky, stylish and sophisticated experience. It’s not pretending to be something else as some other Vegas hotels do, and given it is only 2 year’s old the fixtures and fittings are in good nick. It’s location is good if you don’t want to be in the centre of the madness – but it’s close enough for you to still have the “Las Vegas Strip Experience”.

Would I recommend it? Yes, if the rates are right and you really understand the location compromise.

Would I stay again? Probably not any time soon, only because there are so many other hotels to try in Las Vegas, not because I dislike the property.