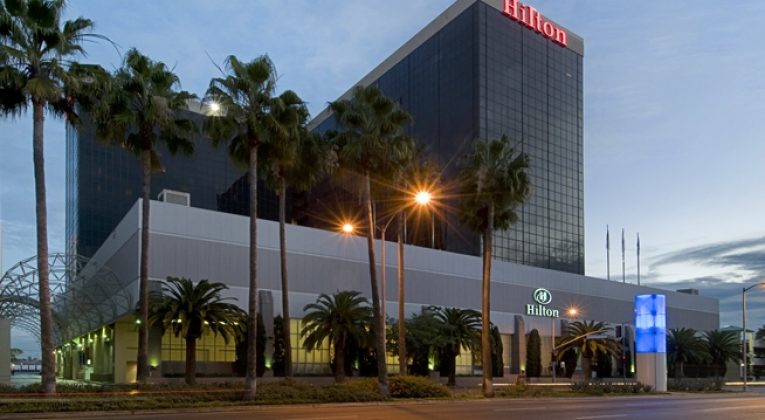 After visiting LA, we were heading off to Hawaii. Our main hotel in LA had been the Beverly Hilton. Whilst this is only around a 45min drive from LAX, our flight departed at 10am and neither of us are morning people. We decided to spend the night before at a hotel near the airport, so we could get up as late as possible!

Being a Hilton Diamond member, I chose the Hilton at LAX with a “bargain” (for California) cash rate of $138. There is every hotel brand imaginable within the vicinity of LAX – so you can chose based on your preferred brand.

The Hilton LAX is located very close to the airport itself on W Century Blvd, the main road leading to the terminals.

It is a plane spotters DREAM – (as would the Marriott, Sheraton, Crowne Plaza or Hyatt Regency), as they overlook the end of runways 25L/R.

This is where Hilton’s app check-in feature is really great. Knowing that the hotel overlooks the runway, you can make a decision when selecting your room. With great views of the runway – comes the associated noise of various aircraft taking off. 747s are NOISEY. Whilst the hotel is well sound-proofed, you are still going to get a noticeable level of noise overlooking a runway.

If you are sensitive to noise, or don’t want to look at planes, by using the app check-in you can ensure you select a room to the rear of the hotel away from the runway, rather than being at the mercy of the receptionist’s computer or goodwill on arrival. As it’s an airport hotel, it is HUGE, so there is a significant difference in noise being at the back of the property to the front.

As seems customary in US Airport hotels, the hotel operates a complimentary shuttle to the airport every 20-30mins. Transfer time is less than 10minutes to Terminal 2, increasing to 20mins to Terminal 9 depending on traffic and number of drops, however you really must allow plenty of time to get to the airport even though it is only 1/4 mile away.

There is a Carl’s Jr and Denny’s just up the road from the hotel if you fancy walking out of the hotel for something to eat.

After being dropped off by our Uber outside the hotel, we proceeded inside through the large lobby area.

The reception desk is located towards the back of the lobby beyond a nice seating area. The queue was rather long, and even the Hilton HHonors Gold/Diamond queue had 5 people waiting. Being a smart #InsideFlyer, I remembered this hotel had an Executive Lounge and Diamond members can check in there (there was also a small, easily missed sign pointing this out to the side of reception). So we went over to the lifts and up to the 16th floor. The lounge is just to the side of the lift lobby, and voila! No one waiting so we were able to check in immediately, which was quick and easy.

I had already selected my room through the app, but chosen not to use digital key which is also offered in the hopes of scoring an upgrade. Not to be this time unfortunately, no upgrade was offered. As we were only there for one night, I didn’t try it on like I did at the Beverly Hilton.

The room I had selected was on the 15th floor, on the corner of the “wing” facing the runways and was huge, so an upgrade might have actually resulted in a smaller room with a poorer view!

I had been offered a variety of rooms during app check-in, ranging from ones that looked barely big enough for a king bed, to relatively large ones on the corner of a wing. I chose a large corner room overlooking the runways.

In the room, was an entrance hallway with full length mirror: 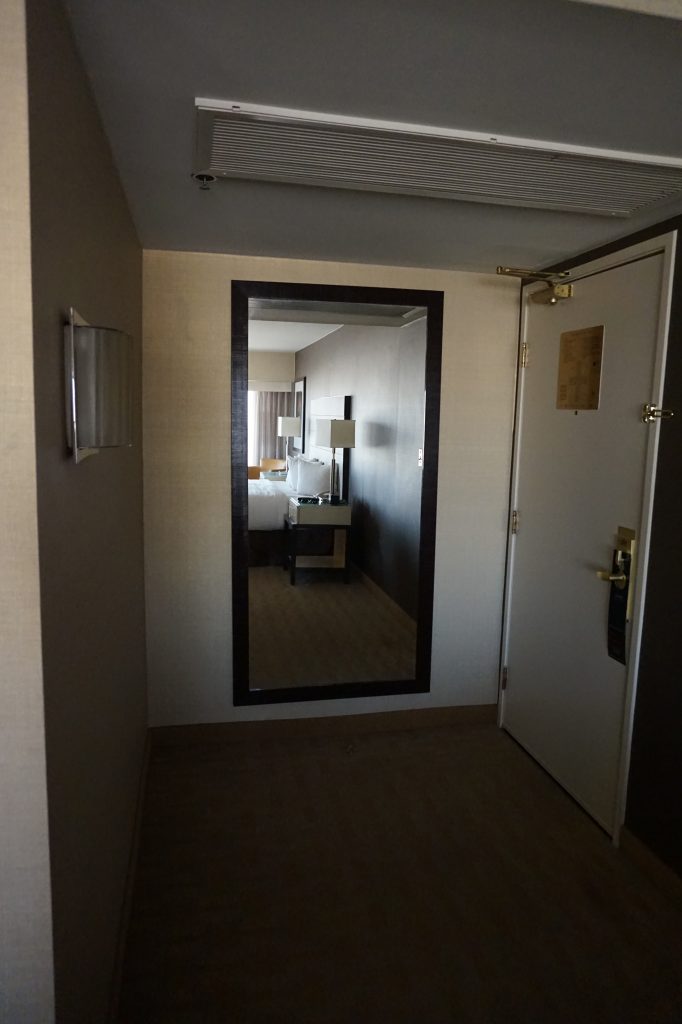 The room was spacious, with a king size bed, large screen TV, armchair and desk. The room was clean, but tired with uninspiring decor. 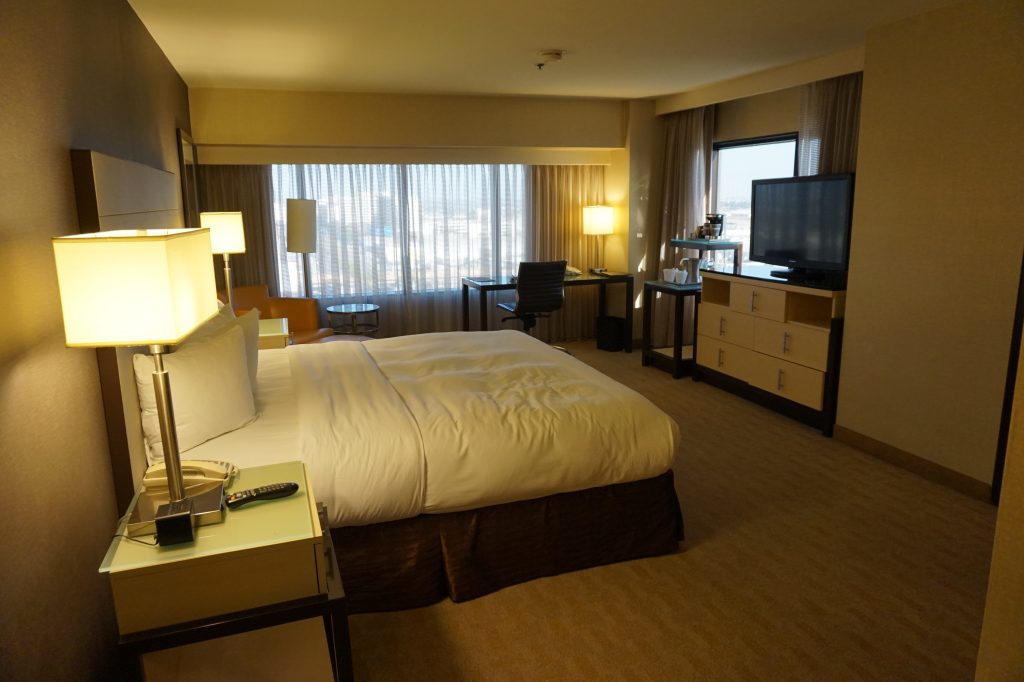 The bed was huge with decent pillows and a thick mattress topper: 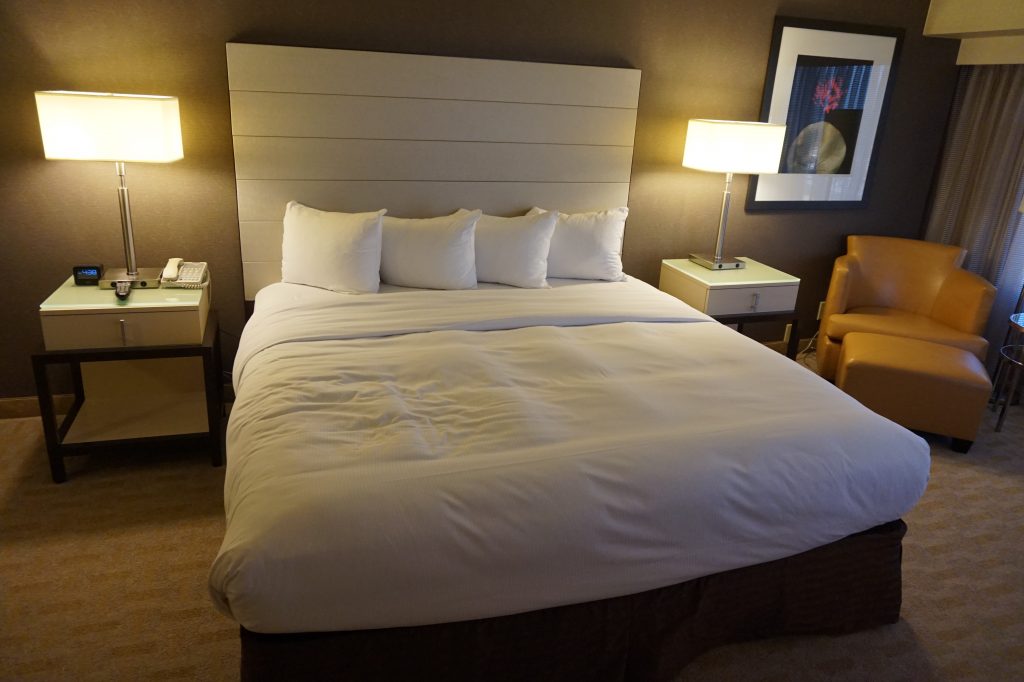 In the corner was the full size desk, and next to it was the ice bucket, complimentary water and coffee maker. There was no mini-bar or refrigerator in the room. 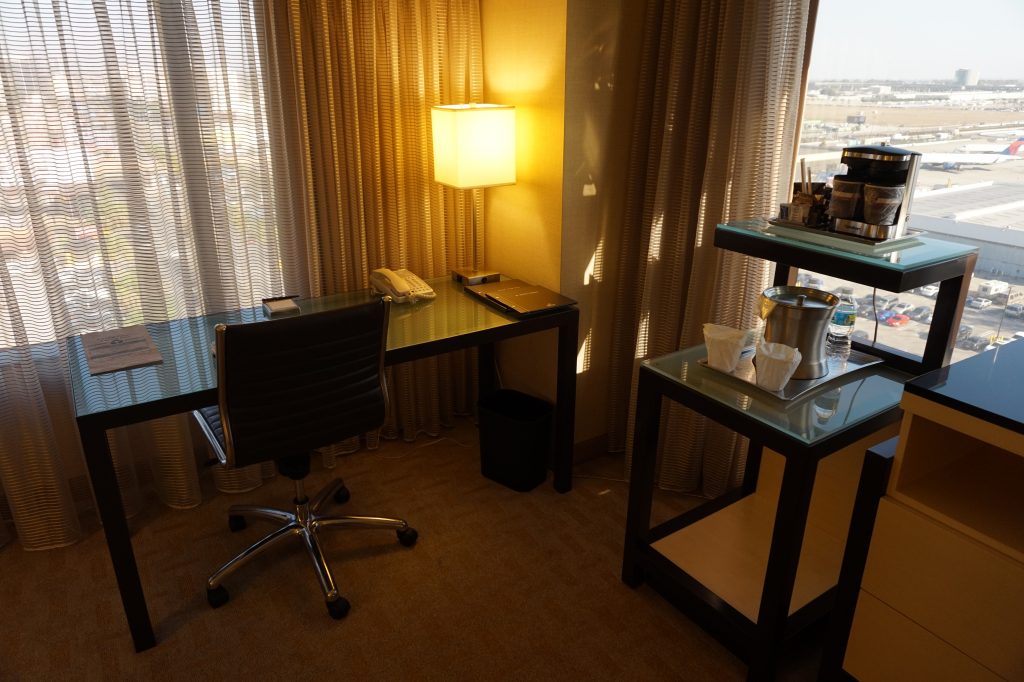 There were 4 drawers, and the top drawer is where the safe is hidden. 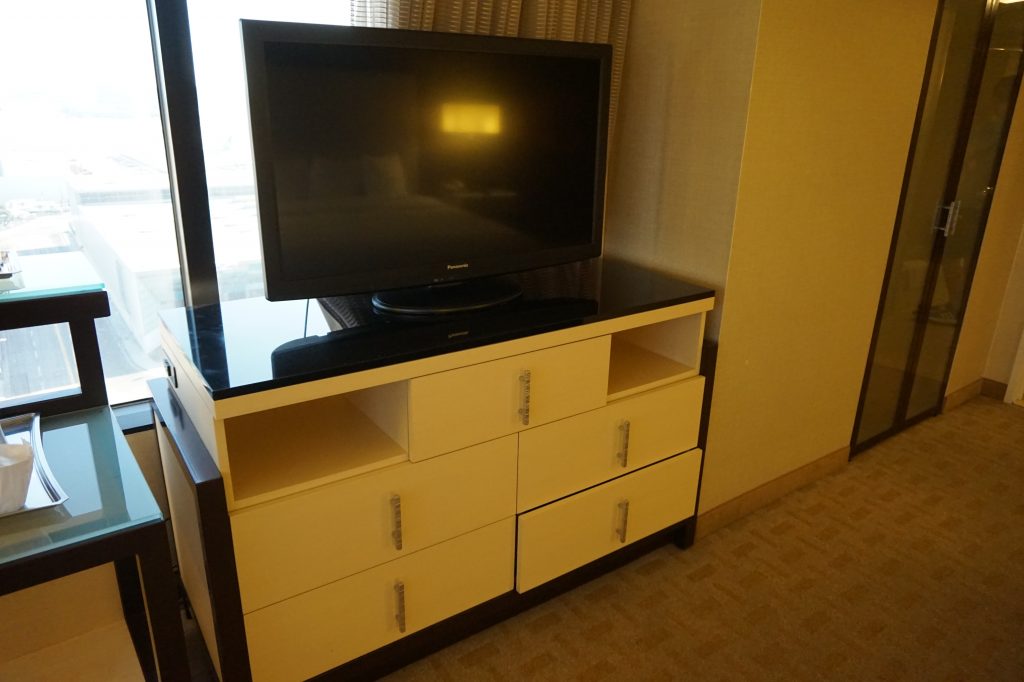 Next to the TV was the wardrobe which was also quite large, with full size ironing board and iron: 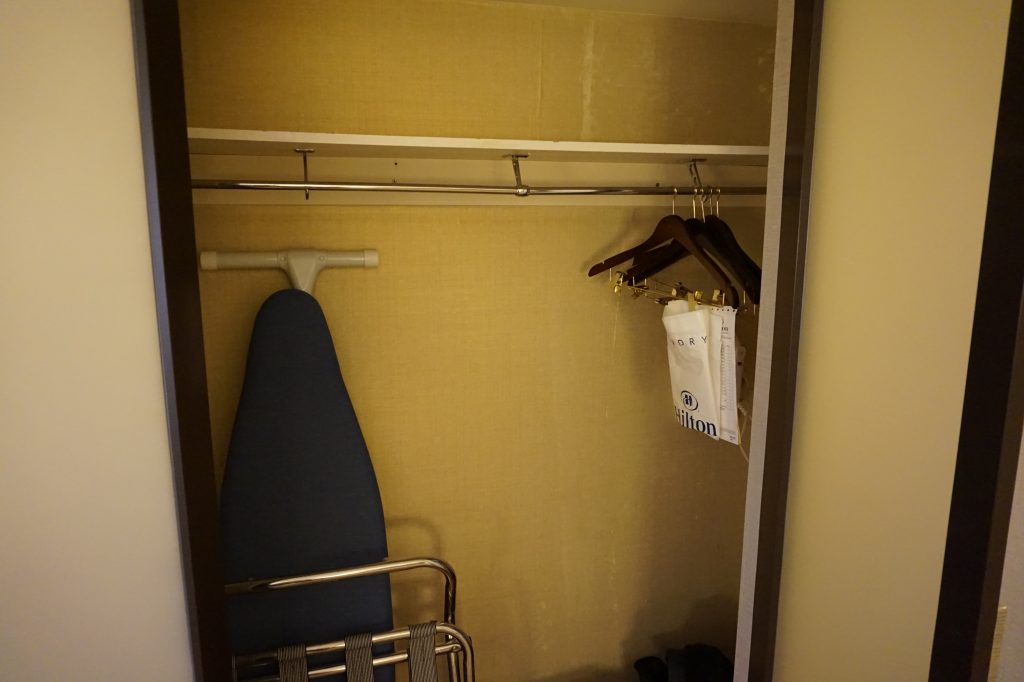 To the right of that was the bathroom. The bathroom was a tired and really could do with a refresh, but was clean.

Behind the door was a large luggage storage area, really useful in an airport hotel: 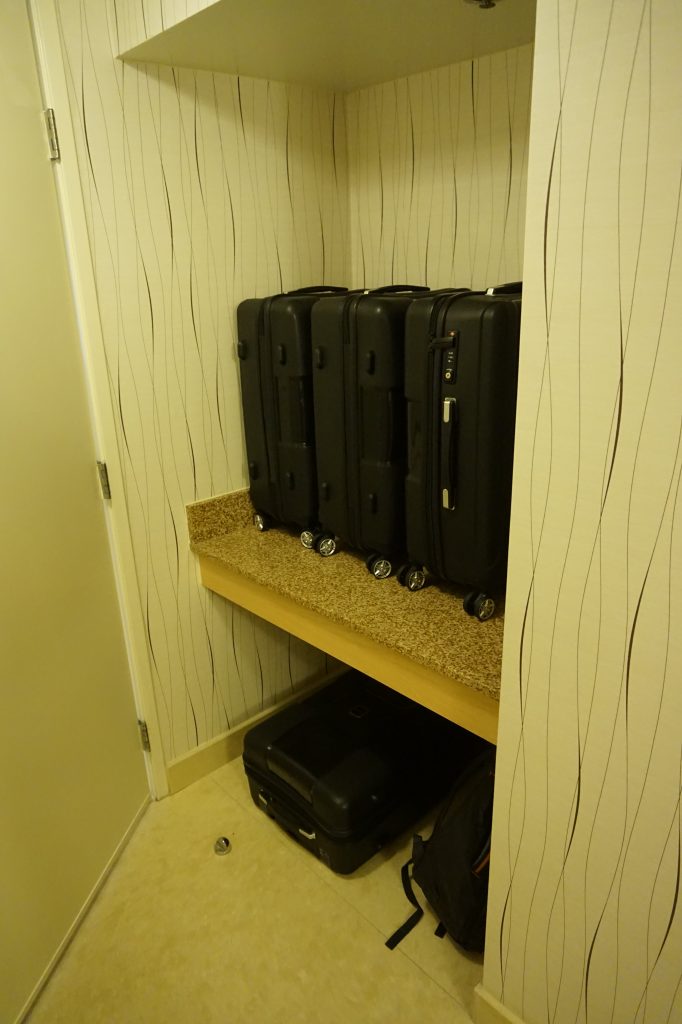 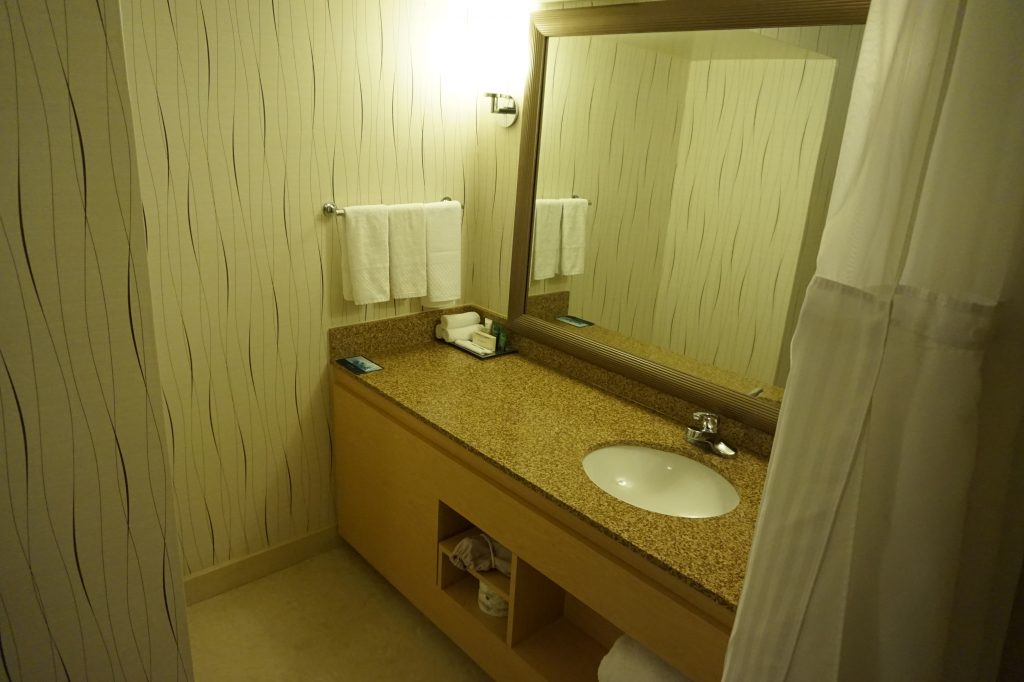 There was a bath with shower over it. Water pressure was good, which is really important for me! 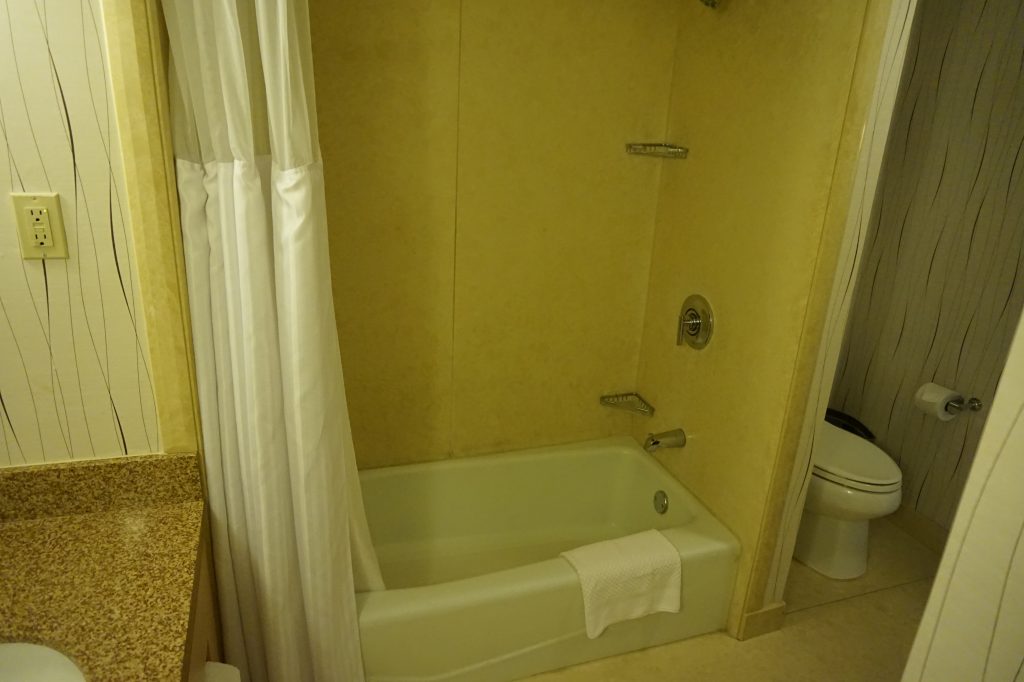 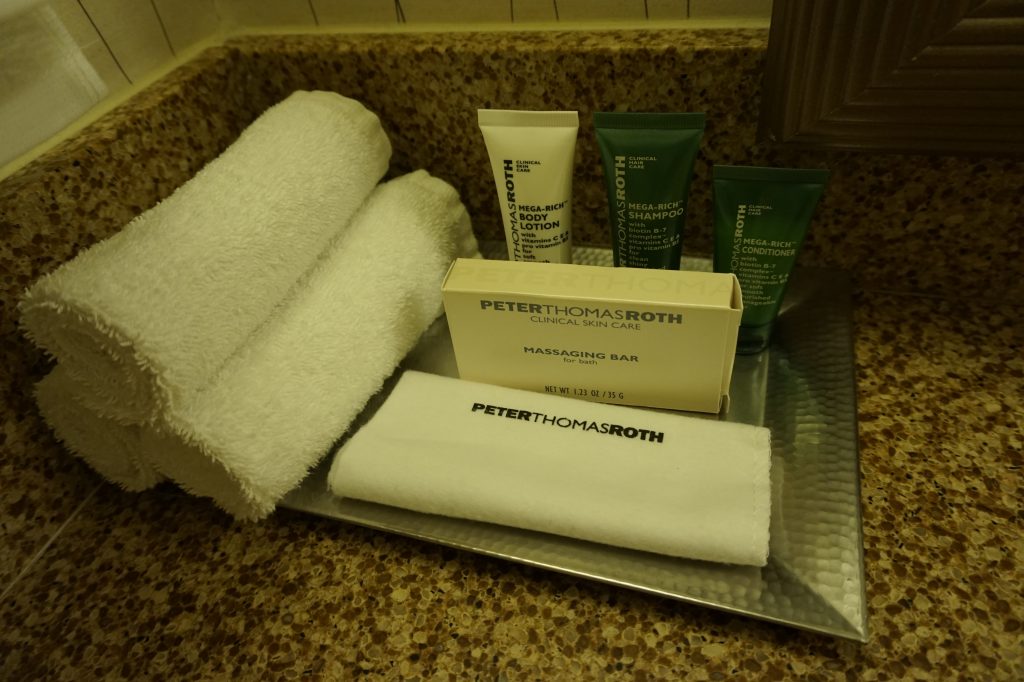 The only downside was the hairdryer. I didn’t discover this until after my shower whilst trying to leave for the airport – not the time you want to have a problem! I left it out in the hope housekeeping would fix it for the next occupant. 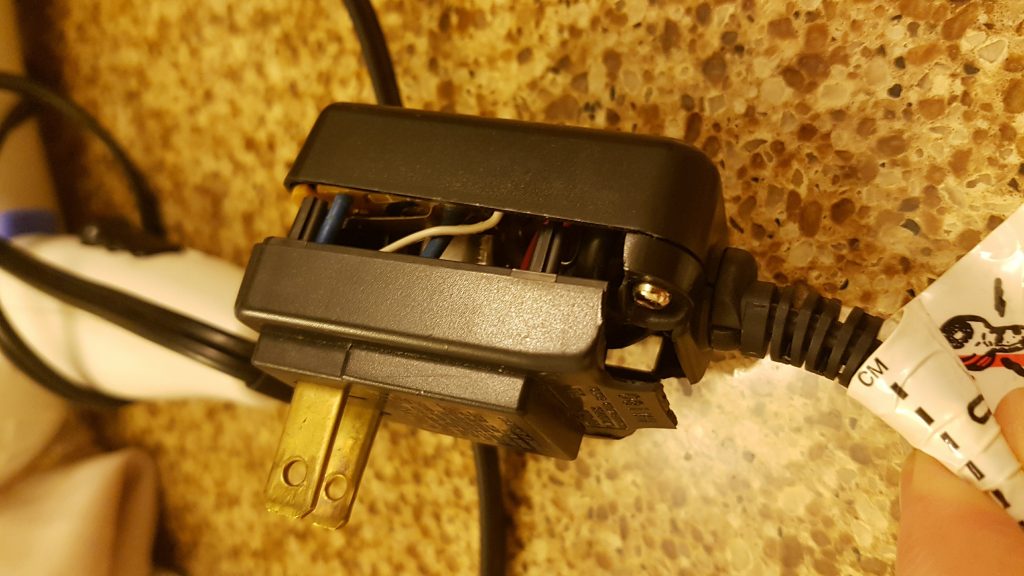 I visited on a Saturday evening, initially the lounge was fairly empty. The lounge is L Shaped on the corner of the building over looking the runways like my room.

At the one end, was a TV showing a news channel, with some sofas in front. 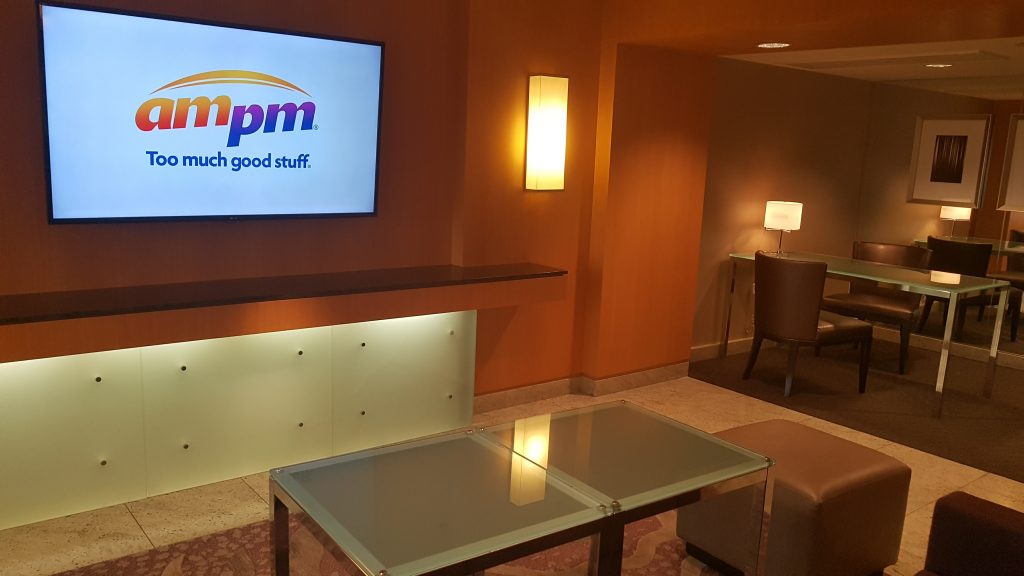 Off to the side in a couple of alcoves were some desks and formal tables: 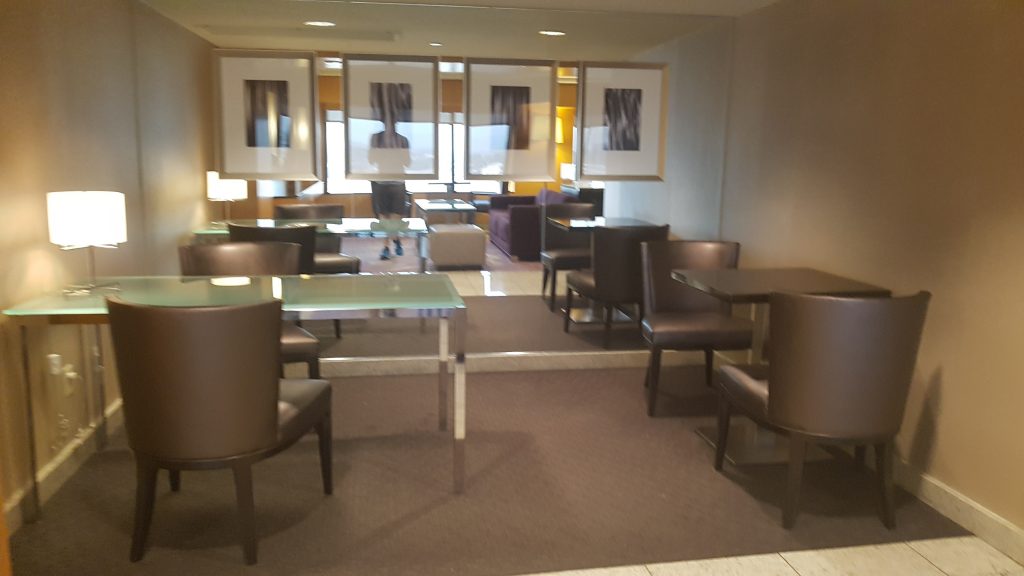 At the other end of the L, was the dining area with a number of dining tables. A nice spot for a muffin and a coke! 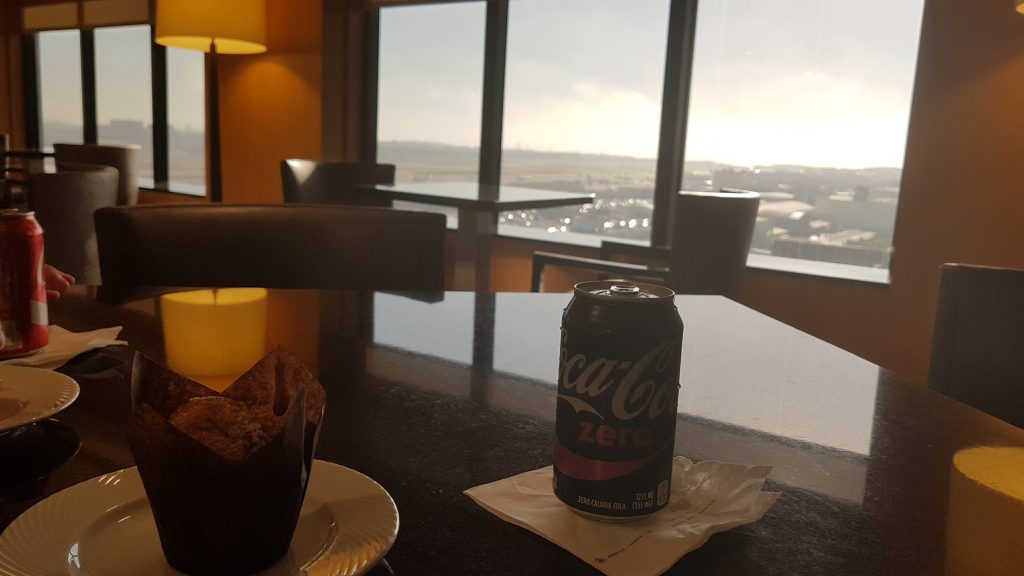 A selection of water and soft drinks were available, along with muffins and pastries. 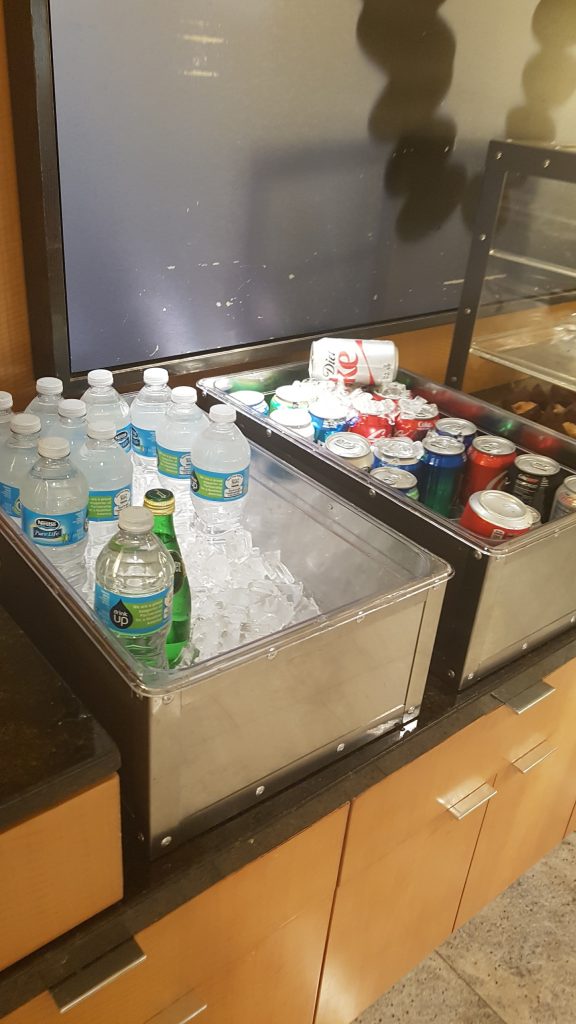 From 7pm, the evening service began. The bar was opened which had a good selection, however the drinks were chargeable: 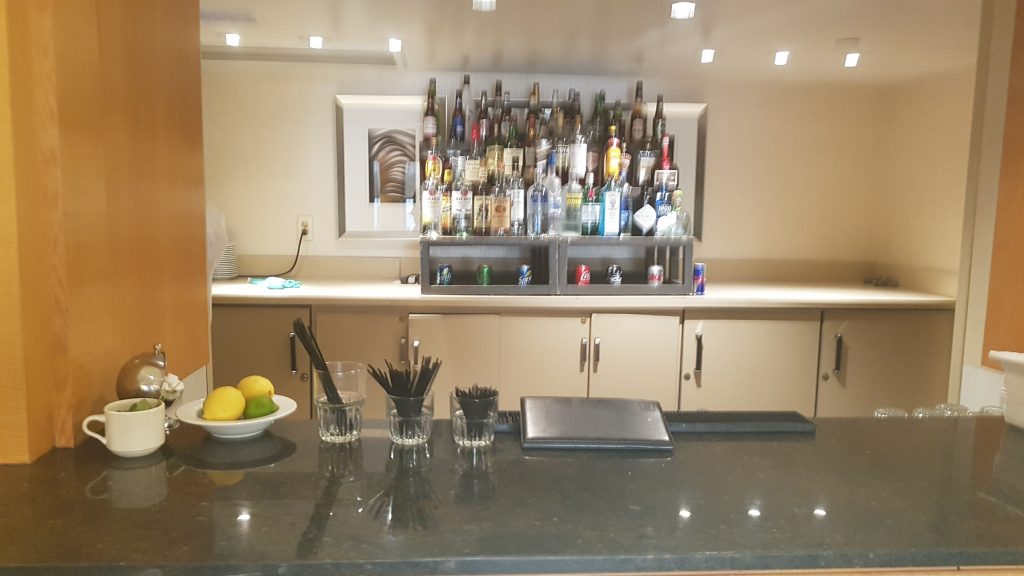 There was also a small buffet selection: 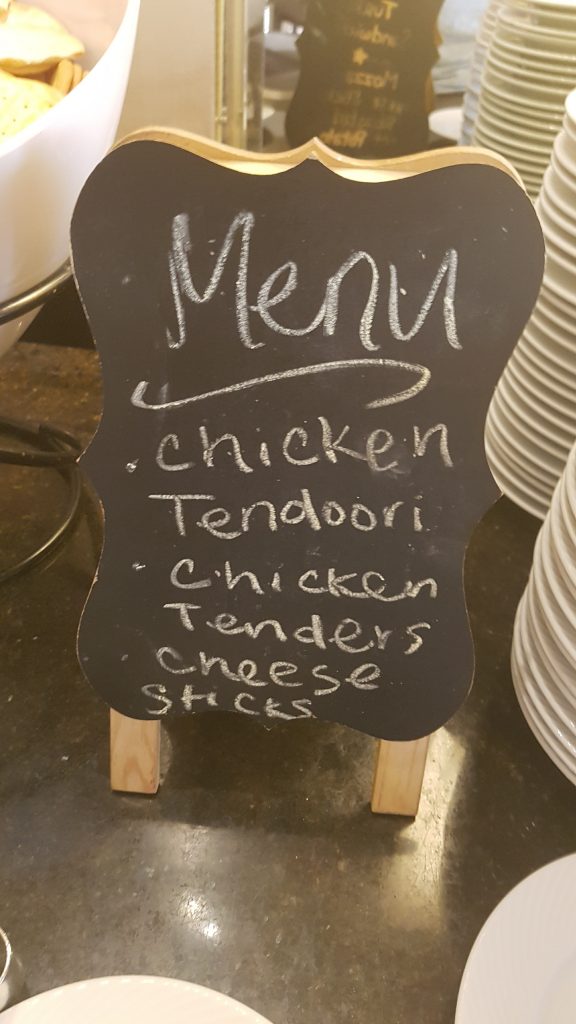 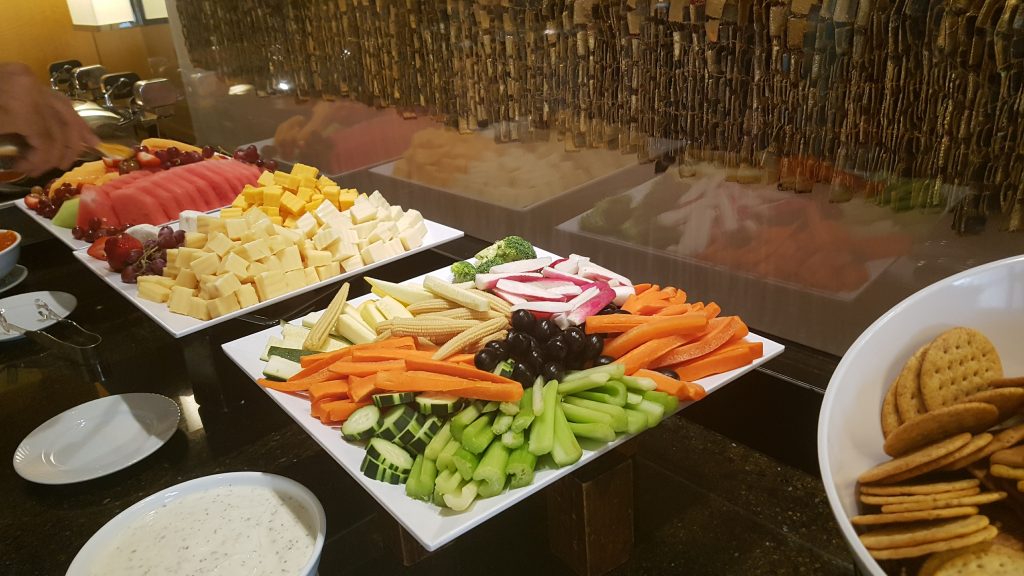 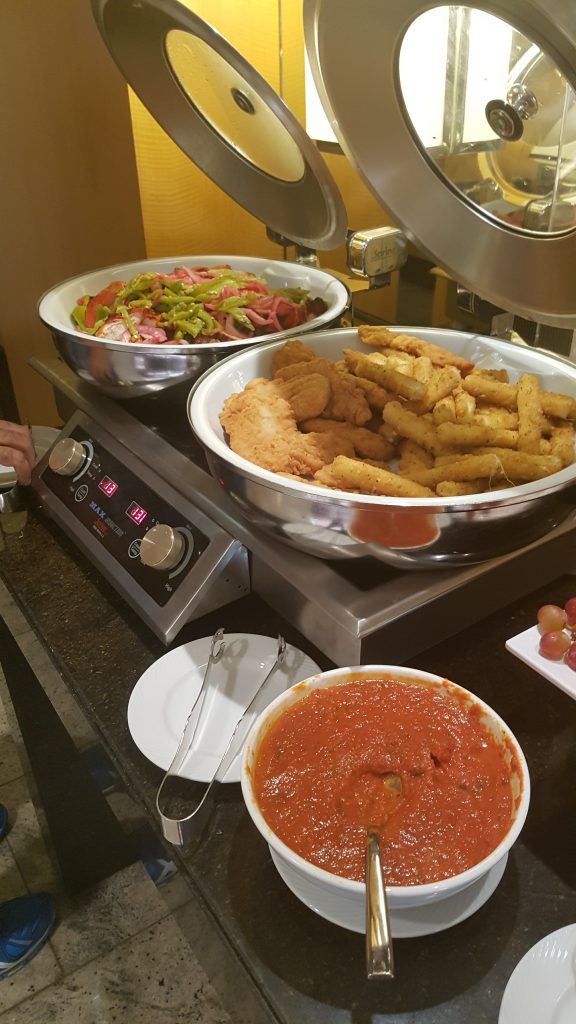 Whilst not a full meal, the snack selection was decent quality and regularly topped up. Overall the lounge was a pleasant place to relax or work, and is a nice perk for Diamond members. Oh, and then there’s the view, especially if you choose a room away from the runway for noise reasons.

I didn’t visit for breakfast as I had a pass for the Air Canada lounge in T2 LAX.

I booked a Standard King Room, advance purchase rate was $138 including tax.

Rooms are generally available for under $120/night, or 40,000 points. At these kind of cash rates, I would not recommend redeeming points.

Overall this was an OK hotel. The rooms are nothing special, but were clean and seemed less battered than the usual airport hotel. The lounge is a nice feature, but I wouldn’t spend any more than $20/night to book an Executive Room if you aren’t a Diamond member.

The location is great, especially for plane spotters, but also at only 1/4 mile from the airport the transfer is short and easy.