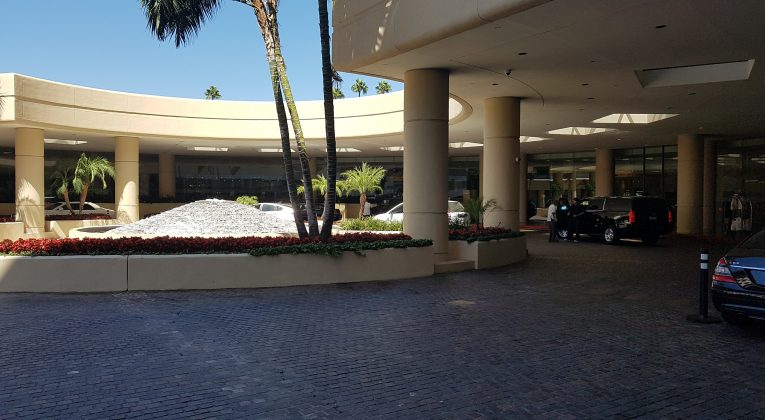 After our flight from Las Vegas, we used Lyft to get to the Beverly Hilton, in Beverly Hills. This is an iconic hotel in Los Angeles, on the intersection of Wilshire and Santa Monica Blvd. It was opened in 1953 and has hosted the Golden Globe Awards since 1961.

Given its prestigious reputation and location, we were excited to stay here, especially as it would be my birthday during our stay.

The Beverly Hilton is located about a mile from Rodeo Drive and Century City. From LAX, it’s about half an hour drive (obviously heavily dependent on the notorious LA traffic!)

Being in Beverly Hills, you are halfway between the beach front city of Santa Monica, and the tourist hotspot of Hollywood so it’s an ideal base for ticking off all the main sights of LA – but you will have to drive EVERYWHERE. That’s not a fault of the hotel’s location, but more a feature of LA – everything is miles apart and the only way around is by car. As covered in my Uber/Lyft article, they are an extremely cheap and convenient way to get around in LA – we never waited more than 5mins for a car from the Beverly Hilton. Parking at the hotel is $42 per night – so you might want to really consider whether you want to have a rental car during your stay!

Outside the hotel there isn’t really anything that you can walk to, but the hotel offers a complimentary town car service within a 1 mile radius of the hotel – ideal for nipping to Rodeo Drive! 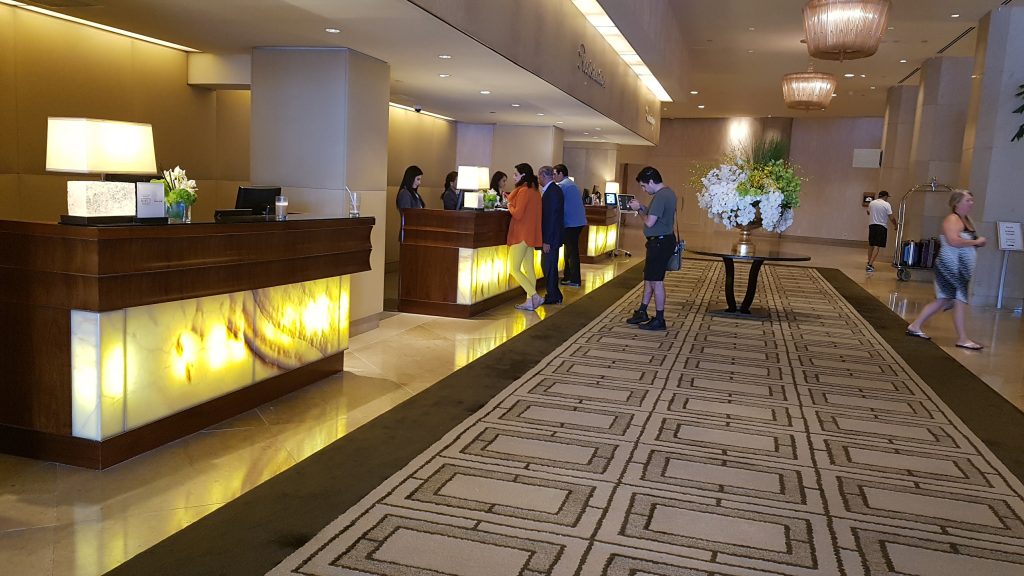 We arrived at about 4pm after a short battle with the beginnings of LA rush hour from the airport. Slightly surprisingly – we were not offered help with our bags outside so dragged 2 suitcases each into the lobby.

We were called forward very quickly – where I began my charm offensive.

I had been slightly cheeky with my booking. We had planned to stay 3 nights in Beverly Hills, from the Wednesday to Saturday, with my birthday falling on the Friday. I made an initial booking for 2 nights using Hilton HHonors points I had bought during a 100% bonus promotion (it worked out a better price/night than cash rates to buy the points), and then made a separate one night cash booking for my birthday, in an upgraded balcony room as I wanted to treat myself!

I had also status matched to Hilton HHonors Diamond using my IHG Platinum status obtained via the IHG Premium Mastercard.

Naturally the check-in agent welcomed me as a Diamond member, and initially found my 2 night points reservation which by default puts you in a standard room. The agent informed me that unfortunately they were fully committed so she couldn’t offer me an upgrade.

Using my best, most charming British accent; and attempting my most innocent-butter-wouldn’t-melt face – I mentioned my Friday night stay.

“Oh, I’m awfully sorry, I also have a cash reservation for Friday night on my birthday – I couldn’t figure out how to link them before I arrived. Is there any chance you can link them for me now?”

“Oh yes Mr Thompson, but Friday is in an executive balcony room, you do understand points reservations are usually in standard rooms…”

“Oh – are they? Although of course, I am a Diamond member and it is my birthday. Isn’t there anything you could possibly do for me?”

By this point my face was hurting from smiling so much – but my gamble and patter worked. Two minutes later after much typing and clicking – suddenly the hotel had gone from “Fully Committed” to the agent whispering “Mr Thompson, as it’s a special occasion, I’ve managed to upgrade you to an deluxe balcony room for your entire stay so you won’t have to move rooms”.

After profusely thanking the agent, we left our luggage with the bellman and went off to our upgraded room!

As described above, I managed to get our 2 nights on points upgraded to a Deluxe Balcony room in the “better” Wilshire Tower by stacking it with a paid night in that category room.

Now normally I believe stacking works better when your first night is the cash night in the better room – but in this instance I had wanted to guarantee the better room for my birthday even if that required switching. I also had the extra “weight” of a special occasion – and they knew I wasn’t trying it on as they had my passport! 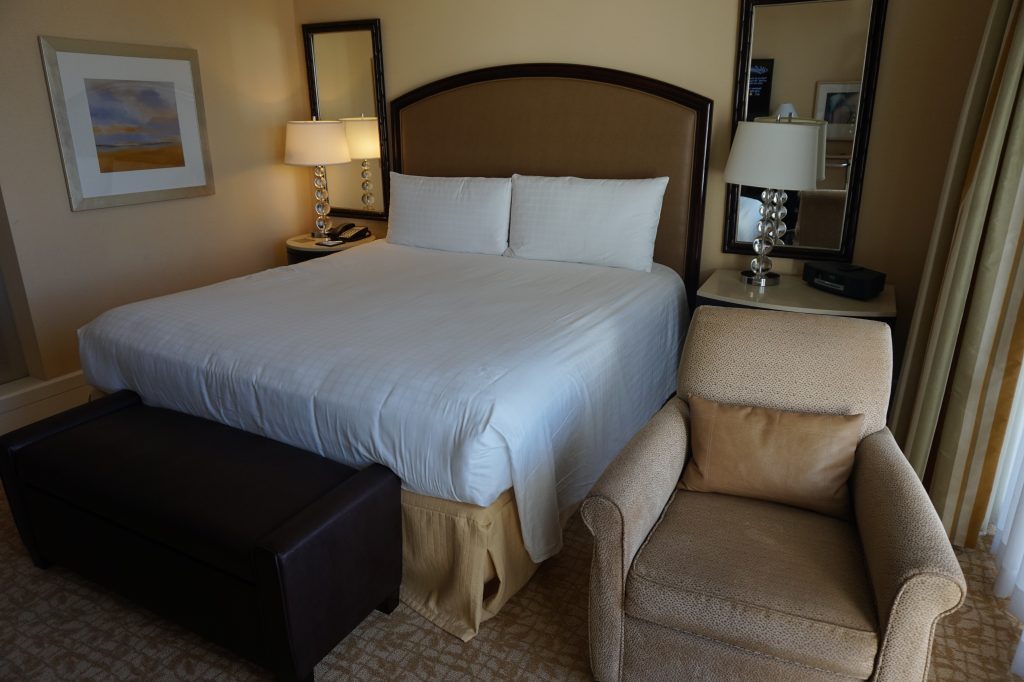 The room was a fair size, but not particularly spacious. The armchair felt rather plonked and the room would probably have been better without it.

The decor was what I like to call “classic up-market” – inoffensive and beige – not particularly stylish or modern but clean.

The bed was really comfortable with nice linen. 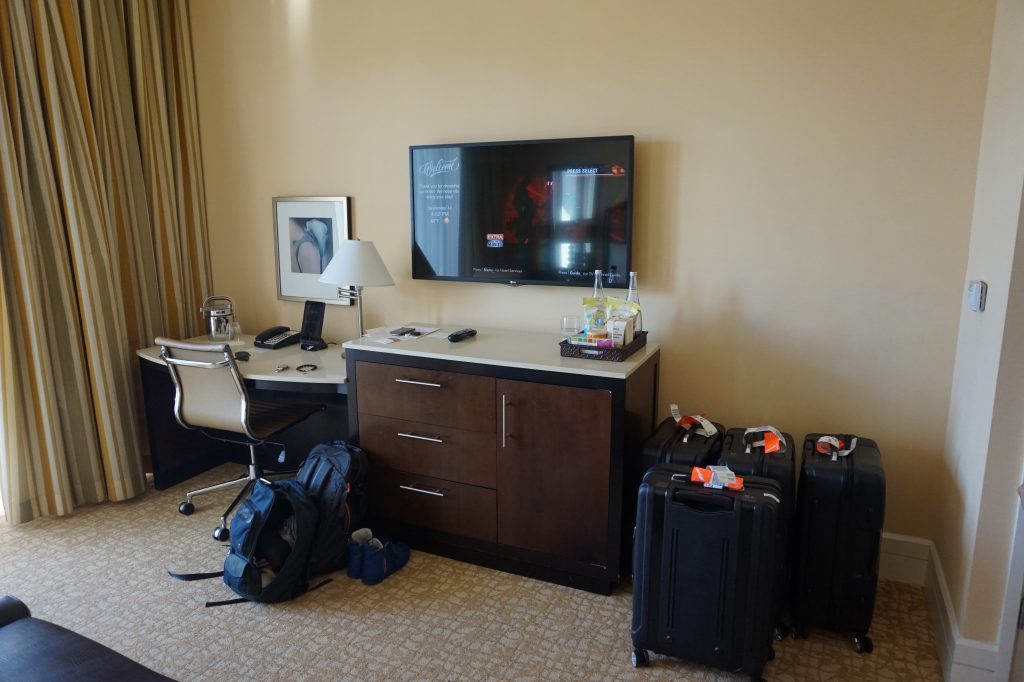 There was a good desk space with a proper office chair, large flat screen TV and a mini-bar. Personal mini-fridges were available on request for a $25 fee/stay. Two bottles of water were provided each day in the mini-bar thanks to my Diamond status.

Rather than a traditional hotel directory, instead there is an in-room iPad which allows you to receive messages, order room service or schedule housekeeping. Unfortunately ours wasn’t working on arrival, but the concierge arranged for someone to take it away overnight and it appeared the next day fully functioning. 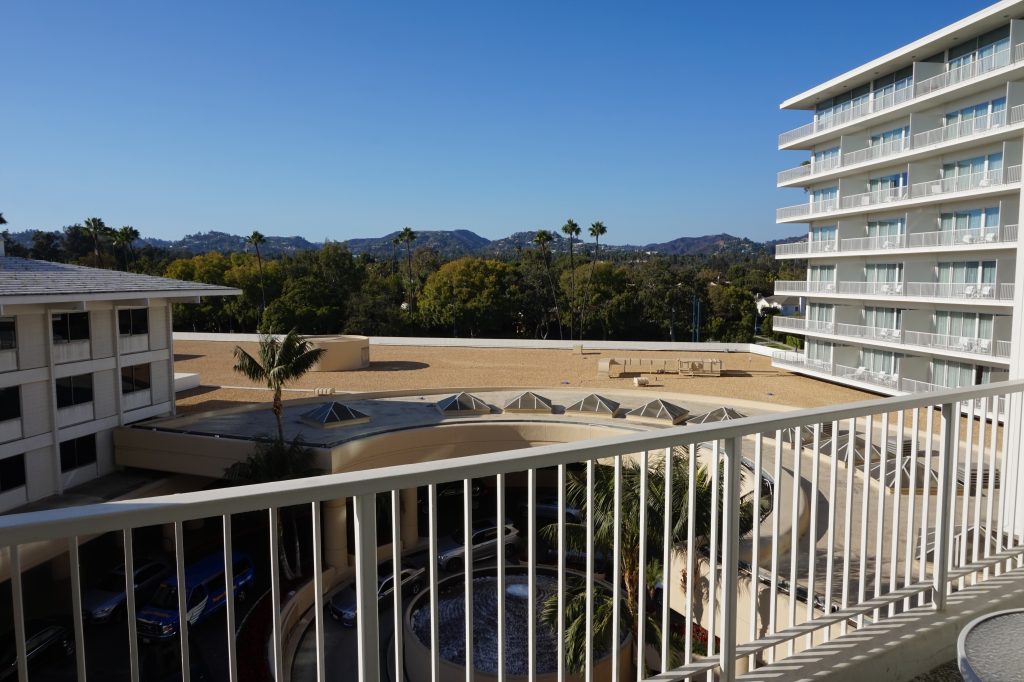 Outside was our balcony, which had a small patio table and chair (all the others had two chairs, I don’t understand why we only had one, but I didn’t have chance to ask for an extra). We had a view over the entrance courtyard and off into the Hollywood Hills.

Back inside, there was a fair size wardrobe with a safe, iron and bath robes: 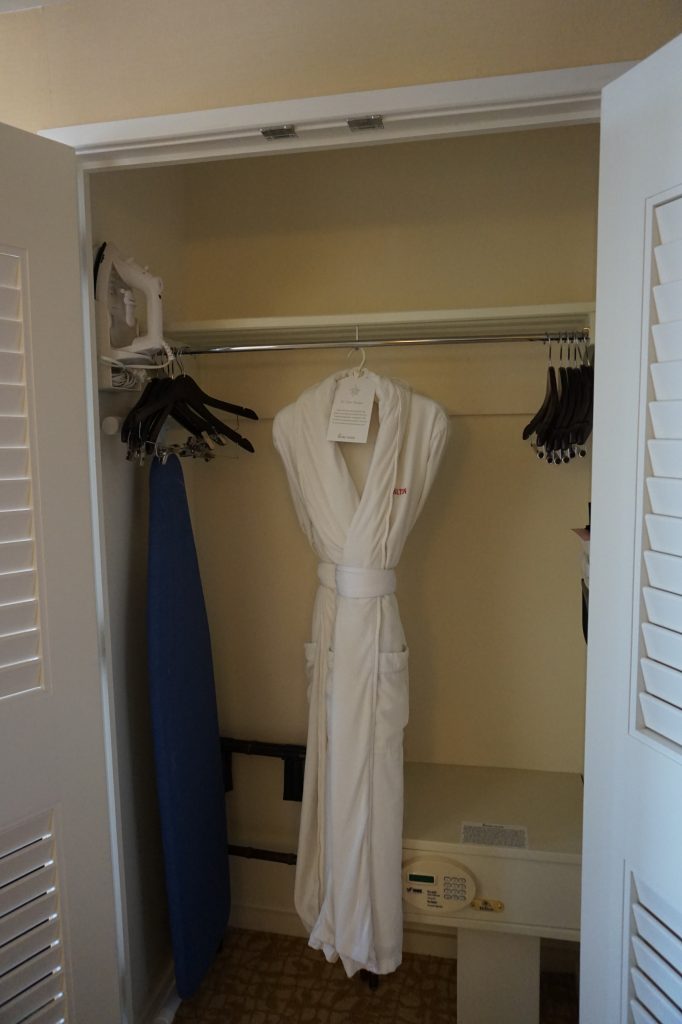 There was no bath in this room, instead it had a rainfall shower, with the toilet screened off behind frosted glass, and a large mirror behind the sink with a TV: 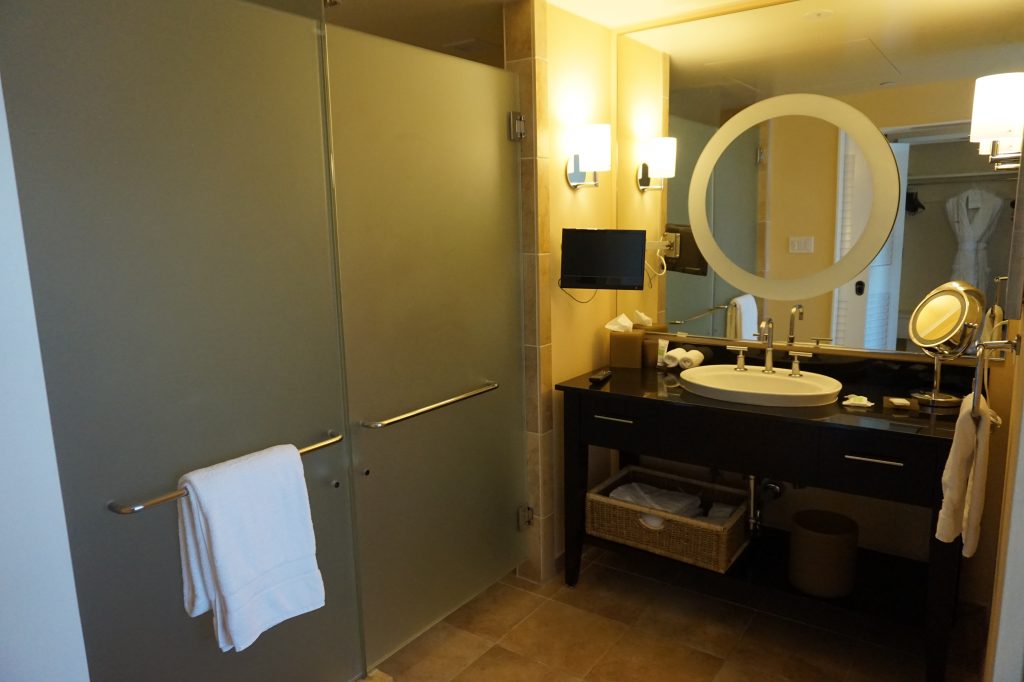 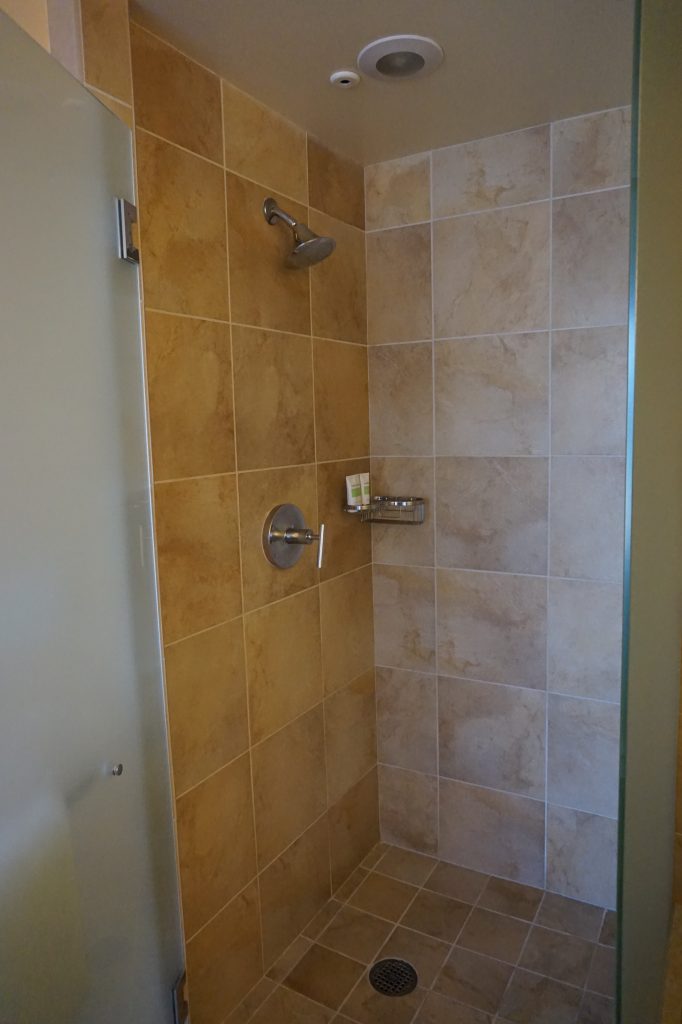 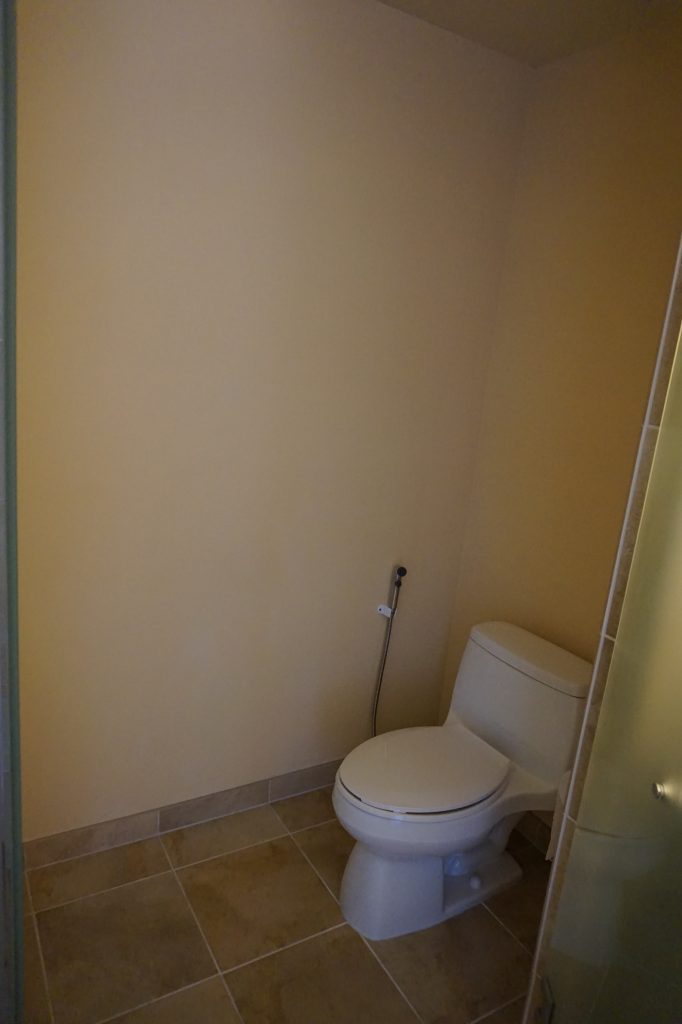 Given what a fuss I’d made about it being my Birthday – and thanks to a sneaky email from my in-laws to the Concierge; this appeared in the room when returned from birthday shopping: 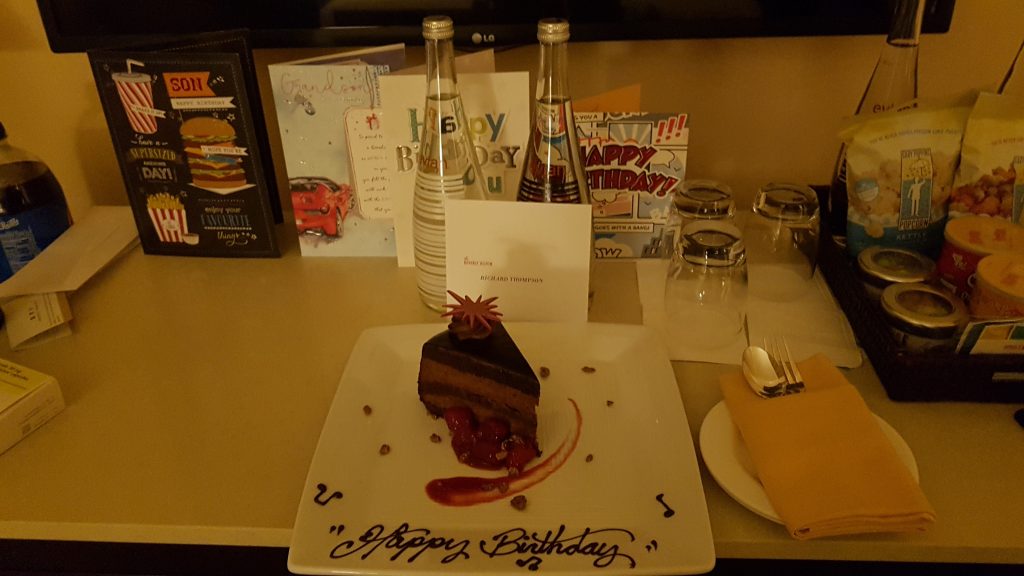 The hotel has one restaurant on site, Circa 55, which is where breakfast is served. Gold and Diamond HHonors members are issued with a voucher entitling them to complimentary continental breakfast – you must present this at the end of your breakfast to avoid being charged.

However – as the breakfast is all served in the same area, it is difficult to know exactly what is included. Selecting what the hotel consider “hot breakfast” options – three slices of bacon and some scrambled eggs resulted in a $10 surcharge for my Fiancé.

The restaurant opens out onto the pool area, with tables both inside and outside so you could chose where to take your breakfast.

The selection was quite wide, but perhaps not up the standard I would have expected. Things were not replaced very quickly when they ran out, not all items were labelled and there were no bowls for cereal on both days we had breakfast and I had to ask. 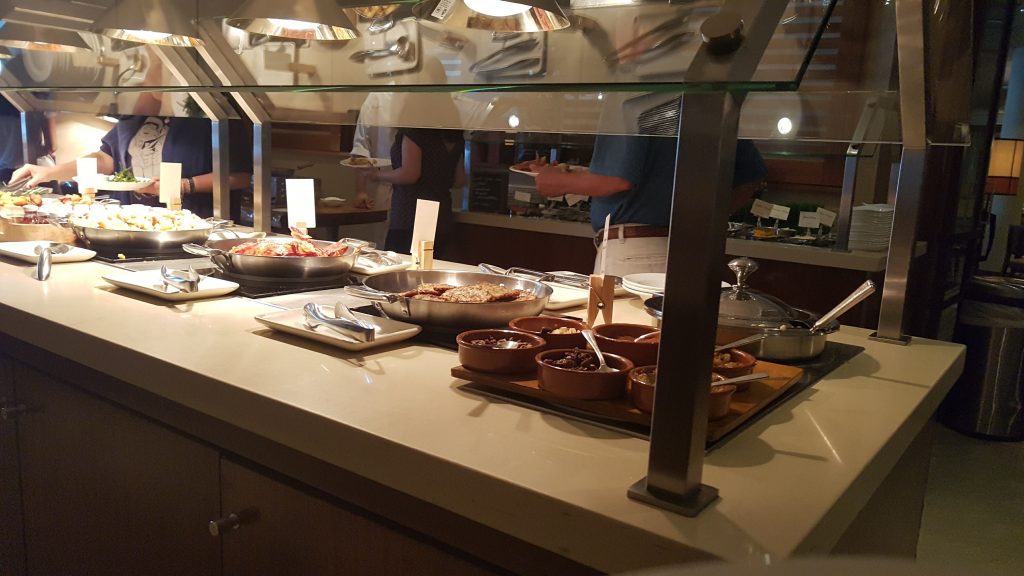 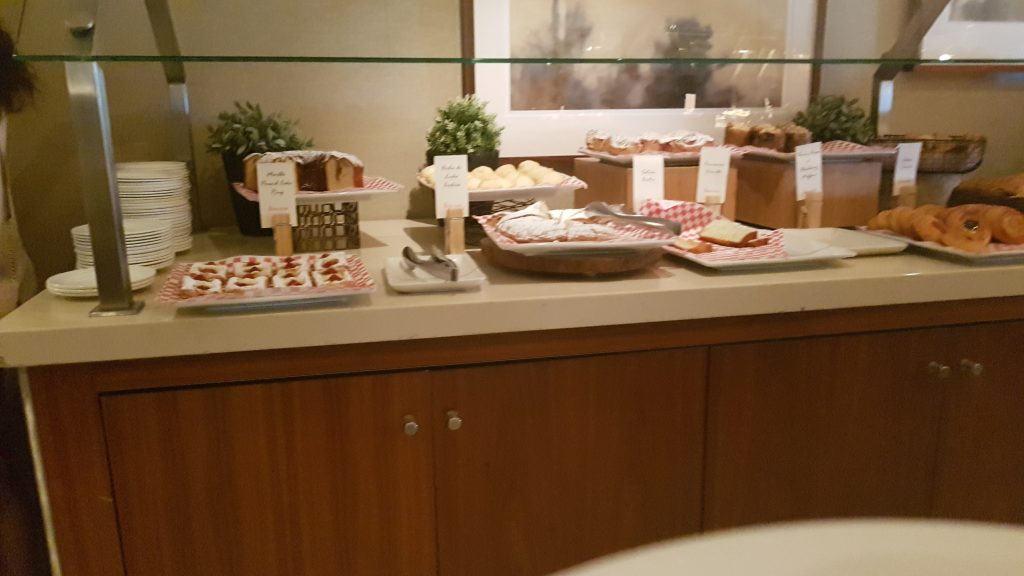 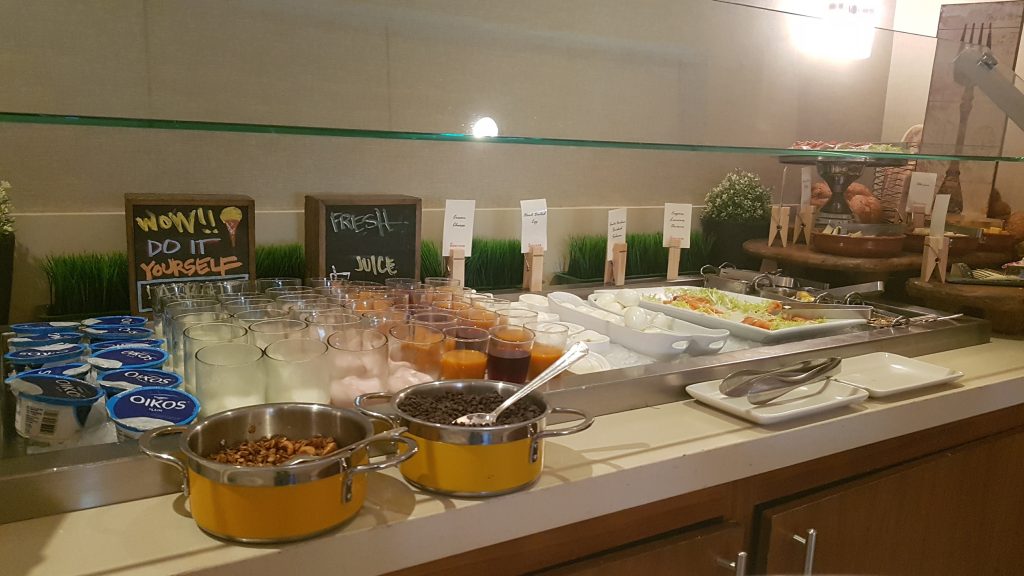 A portable table was set up for us, with table cloth, full cutlery, folded napkin and a flower! I also loved how the ice cream I ordered came in its own ice bowl (and it was really tasty!) I didn’t feel so bad about the $10 tray charge given the presentation. 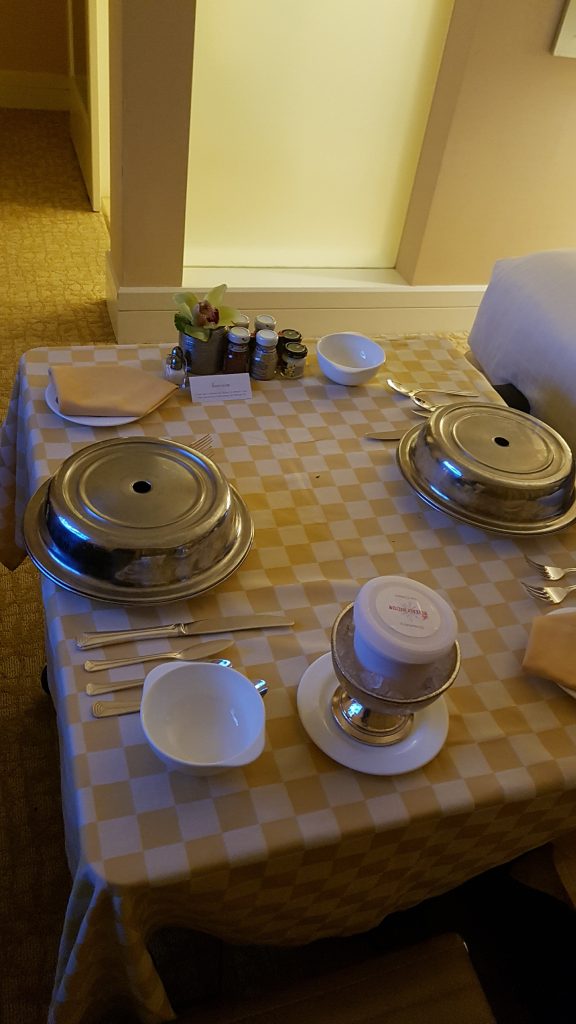 The hotel has a modest sized pool, with plenty of sun-loungers. There are also rooms available known as “Cabana” rooms which open directly onto the poolside. Personally I wouldn’t choose one of these rooms as your bedroom literally opens onto the public pool area, and can be seen from the restaurant.

I didn’t get a photo as it was always busy, so here is one from the official hotel website. The cabana rooms are those under the awning. 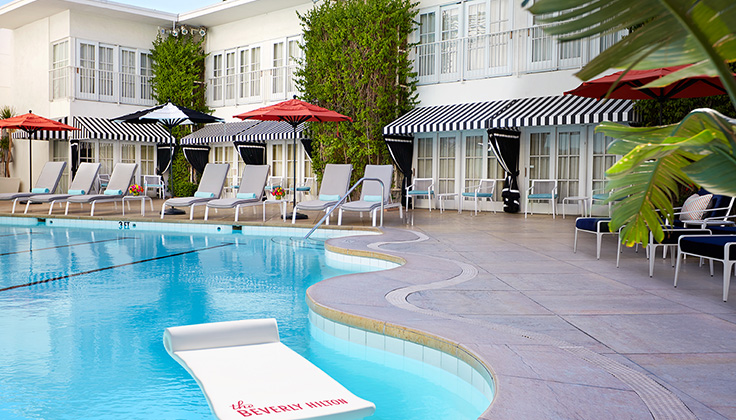 On my birthday, my fiancé Alex had booked us both into the onsite Aqua Star Babor Spa. I had a deep tissue massage, whilst he had a facial. This was a world away from our Terminal 3 Lounge experience!

Now, given we were in Beverly Hills, this spa is not cheap. However, this is reflected in the standard of the treatments and facilities. Our treatments were excellent, lasting an hour and a half. Below are photos of the changing and steam room/shower area which were available before/after your treatment. 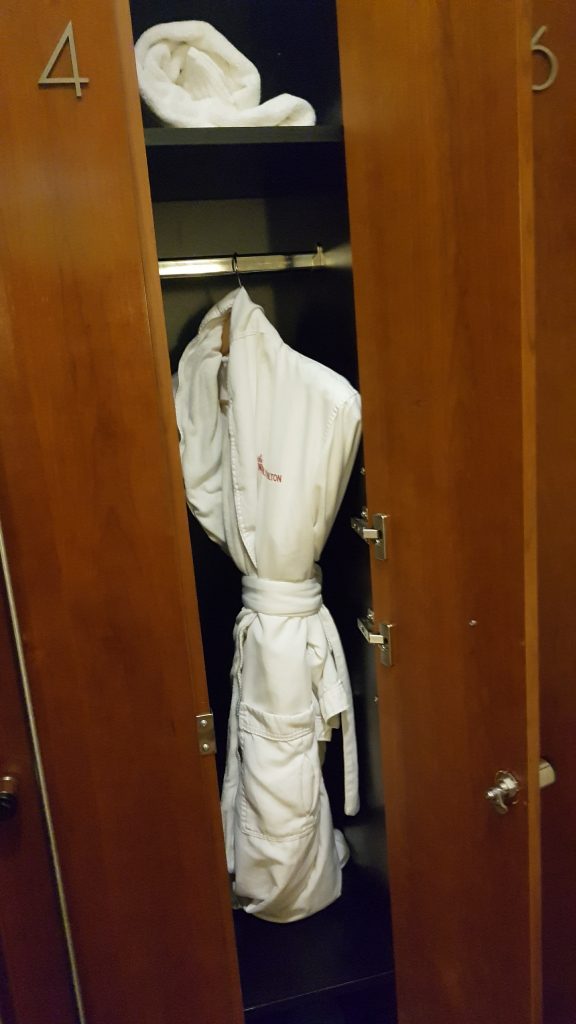 We were allocated a locker each, in which our robe was waiting. 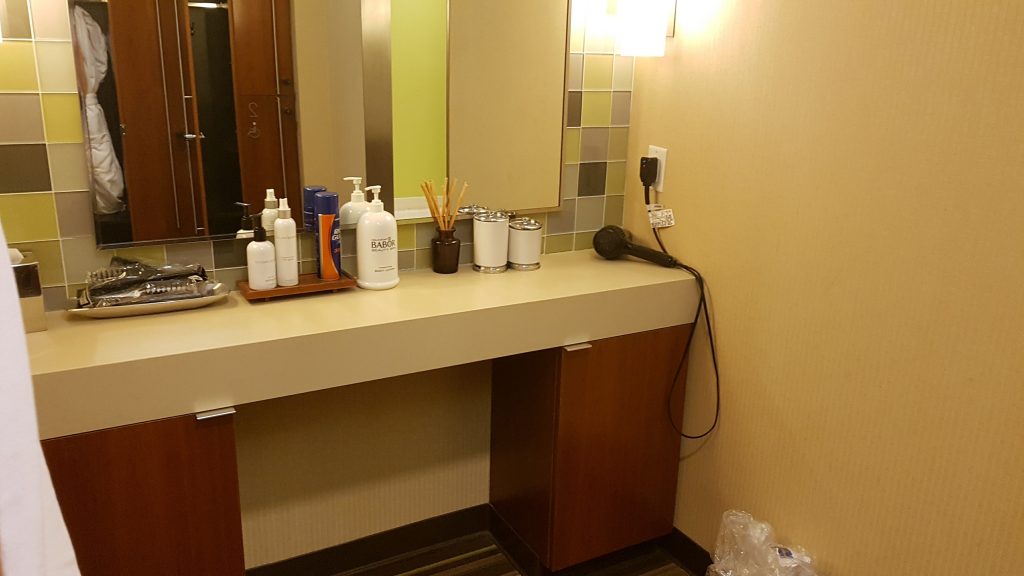 Behind the lockers was a dressing/grooming area for after your treatment. There were complimentary new combs and brushes, hairspray, deodorant, moisturiser and cotton buds. 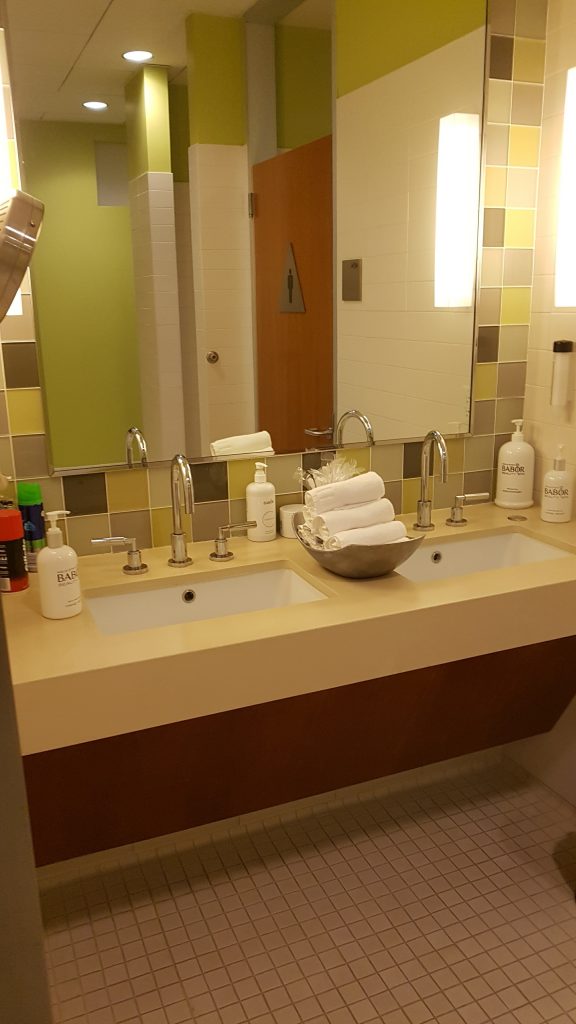 Next door from the locker area, were two sinks with Babor products and complimentary razors and shaving foam.

Along the corridor from this, were the two steam room/showers, one standard and one accessible with further Babor products: 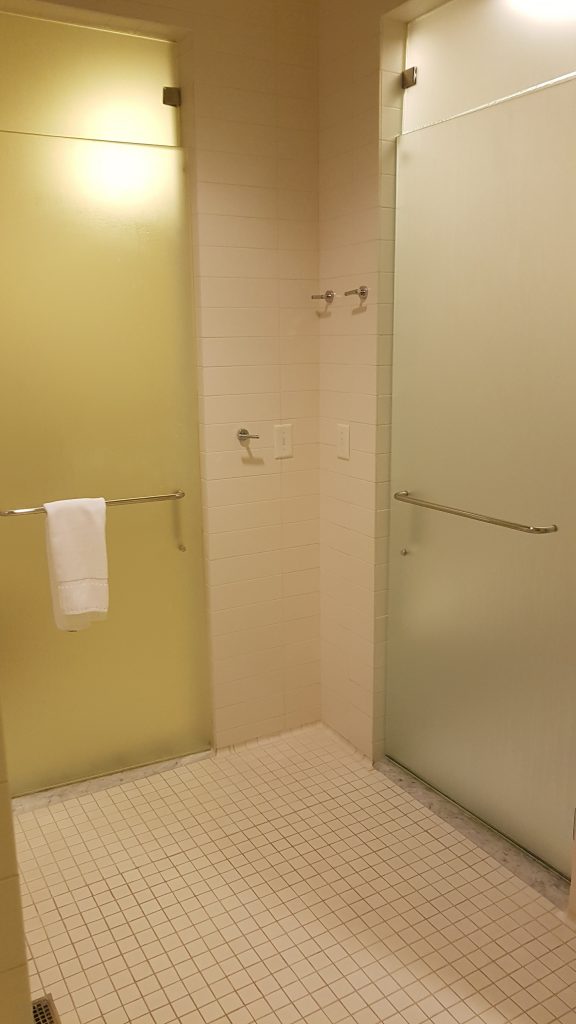 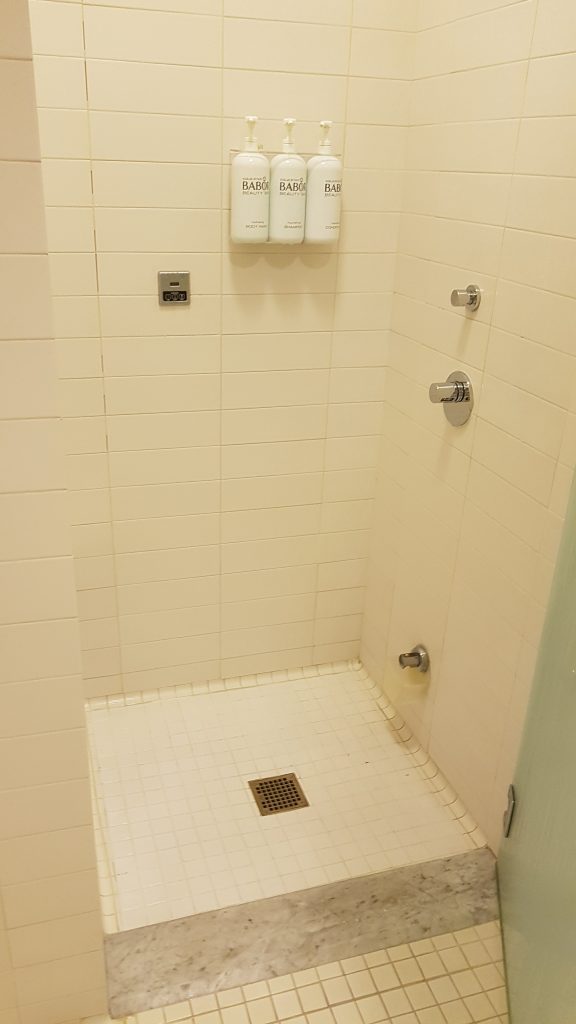 The steam rooms heated up quickly and were very relaxing after a deep tissue massage! 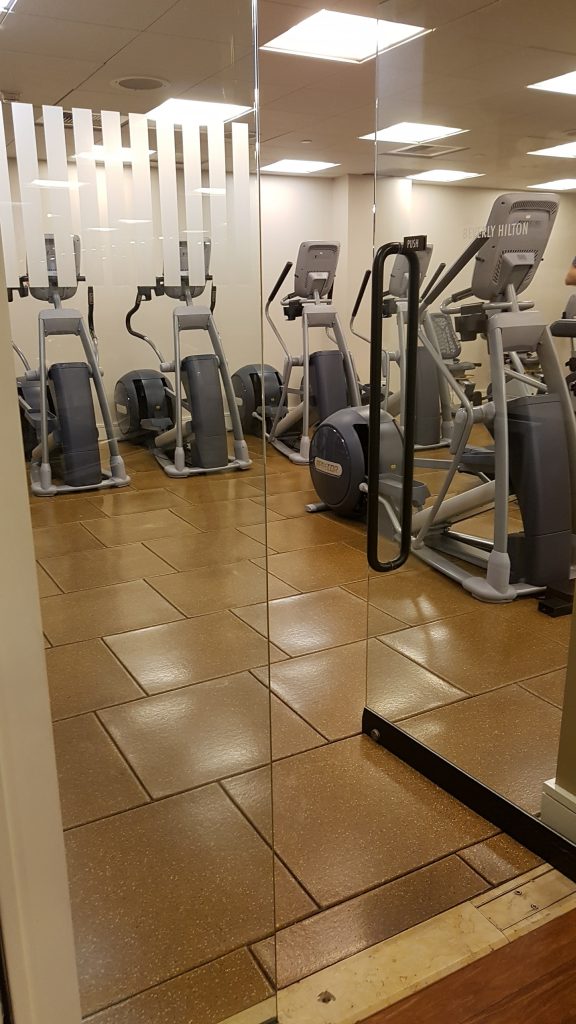 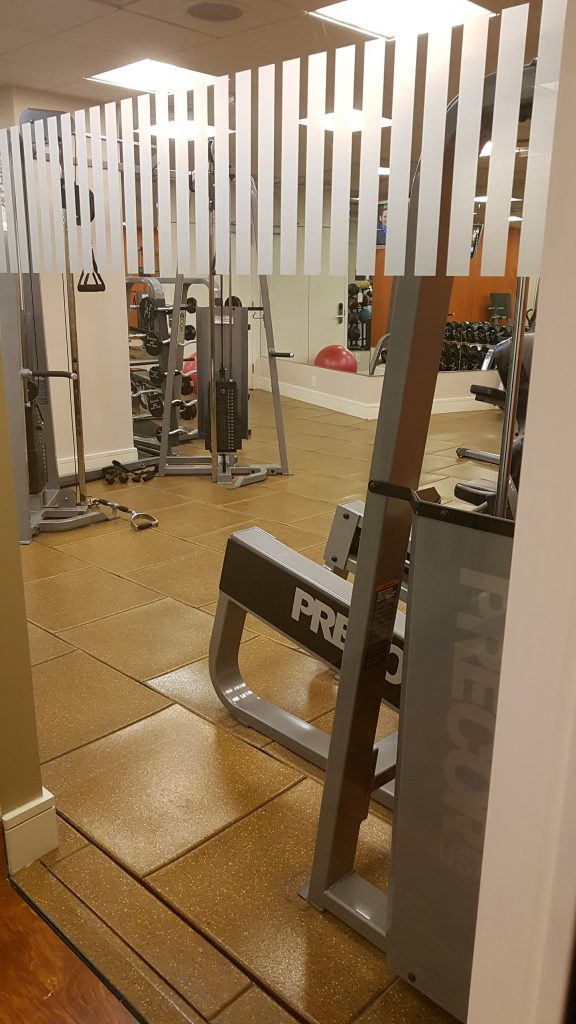 I liked my stay at the Beverly Hilton. It is a good location, in between Santa Monica and Hollywood, a short Uber ride from the nightlife of Sunset Blvd and shopping at Rodeo drive. The upgrade helped as we didn’t have to move rooms – although if that was a deluxe room, I wouldn’t like to see a standard one. It didn’t feel particularly deluxe.

They are currently constructing a Waldorf Astoria tower next door, which I’d be really interested in visiting once open to see how they differentiate the service, and also to have a more modern room.

An interesting thing to note – I have had the Hilton HHonors Barclaycard since January. The card offers, amongst other benefits, 2,500 bonus HHonors points for your first 4 Hilton stays during your first 12 months. Amazingly, this includes stays booked with points, AND the Free Night certificate (or perhaps this is just in line with Hilton’s policy of reward nights counting towards elite status qualification?). I hadn’t noticed this until after completing this stay when I was checking my account in the app – but 2,500 points were posted from our stay at the Berlin Waldorf Astoria, and then for our subsequent 3 stays in California!