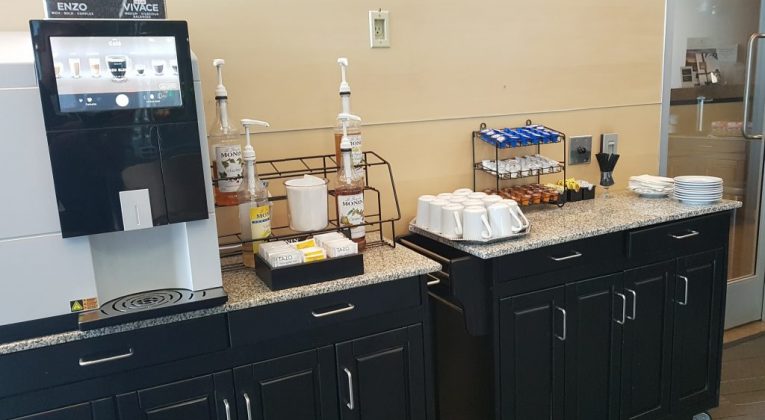 After our stay at the SLS Las Vegas, we moved onto LA for the next stop on our West Coast Tour. Of course, me being me, I couldn’t just hire a car and drive there like everyone else. Why drive for 5 hours when you can fly First class, earn Avios and Tier Points!?

Checking prices for the 45min flight 4 months out, it was £112 each to fly with AA in Domestic First, whilst Economy was around £85. I then planned to use my 2 complimentary Lounge Club passes from my American Express Gold Card to access The Lounge at LAS as Domestic First Class in the USA does not entitle you to lounge access normally.

It was actually cheaper to book a First Class fare, as this includes 2x checked bags – it would have cost us an extra $60 each to check 2 bags on top of the Economy fare. Coupled with the 2-2 seating rather than 3-3, priority boarding/baggage and extra Avios/Tier Points made this overall an attractive package on paper – let’s see if it worked out that way!

Travelling in Domestic First entitles you to use the premium check-in counter. At LAS Terminal 1, American Airlines has one “Standard” and one “Premium” check-in queue regardless of destination. The premium queue was significantly shorter than the standard one, but we still had to wait about 10 minutes, mostly it seemed, due to the number of AA Executive Platinum frequent-flyers also using the queue to check-in for Economy flights.

Once we were called forward, we were served quickly and efficiently. Whilst you don’t get AA lounge access when travelling within the USA, you do get fast-track security with First Class tickets at LAS, so we headed there right after check-in.

The Fast Track security at LAS T1 is just a shorter queue, before joining non-Fast Track passengers to actually go through screening rather than a separate security area, so whilst it saves some time, you’re totally at the mercy of how busy standard security is. Luckily for us, it wasn’t too bad and we were through in under 5 mins. Right after security is the boarding area for the trains to the “D gates” building which is separate from the check-in area of the terminal, from where our flight was departing.

The Club at LAS is located at the top of the escalators as you exit the train from the rest of T1.

Apologies for the slightly blurry photo – seems my phone didn’t want to behave!

As I mentioned above – this lounge is very small – the complete opposite to our experience at Galleries First T3 Heathrow. There are two areas as you enter the lounge, with a bar in the middle.

To the left of the entrance is an area with a coffee machine: 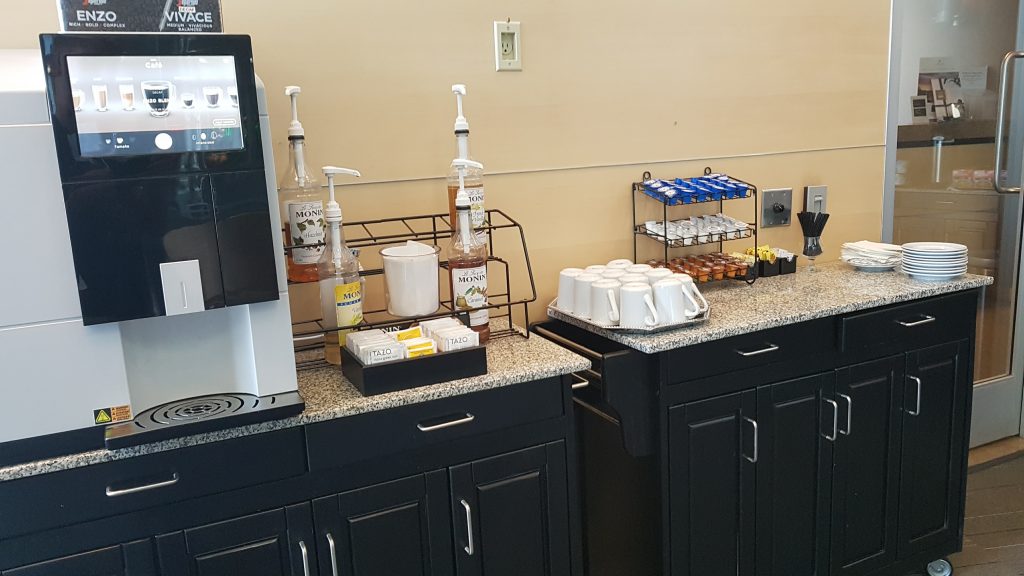 There is also a selection of fruit and pre-packaged snacks. Certainly no Concorde Room Dining experience here! 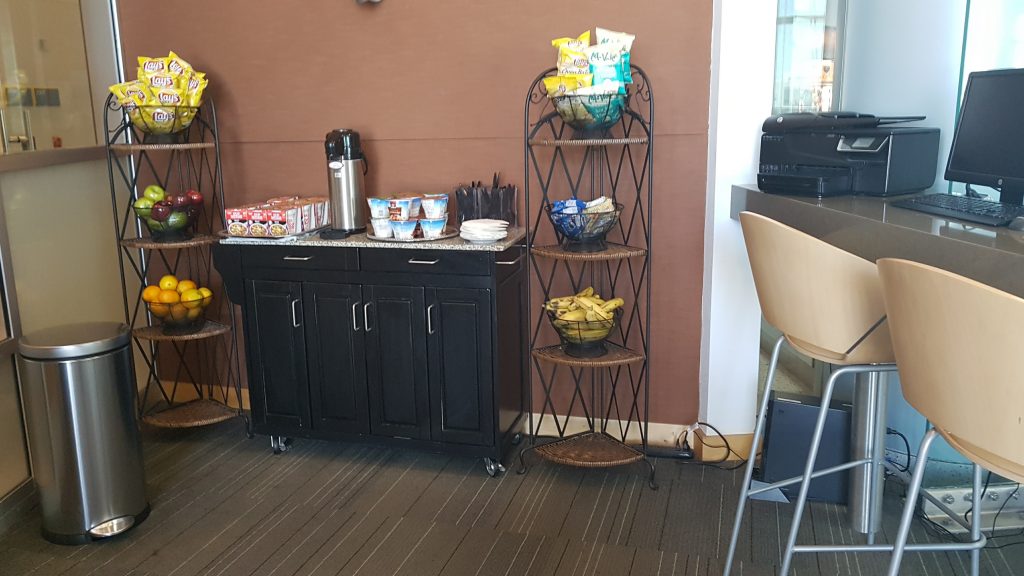 There was also a single PC and printer on the bar-table overlooking the atrium. 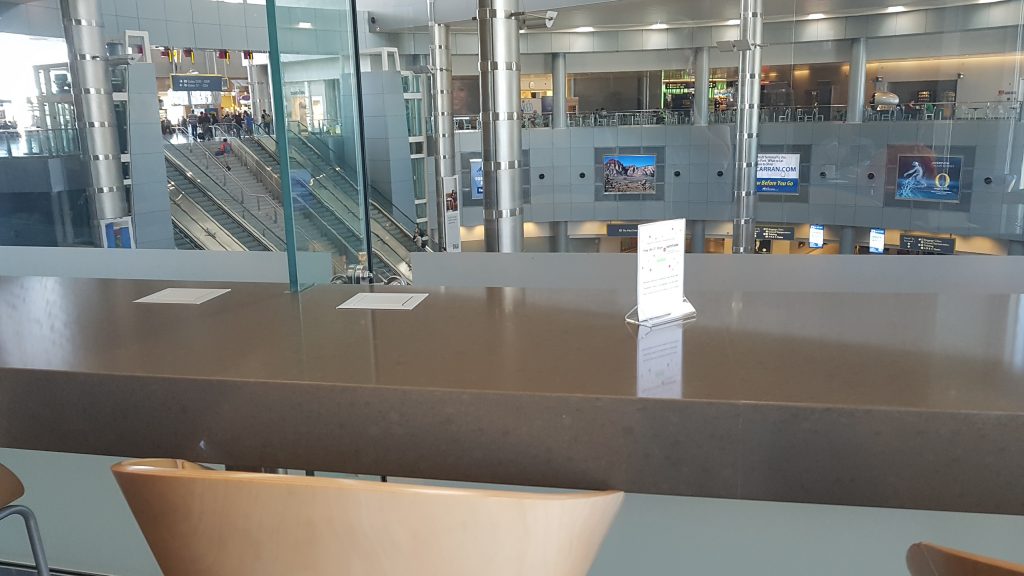 At the end of the room was a dining table overlooking the tarmac (not that there was anything to “dine” on): 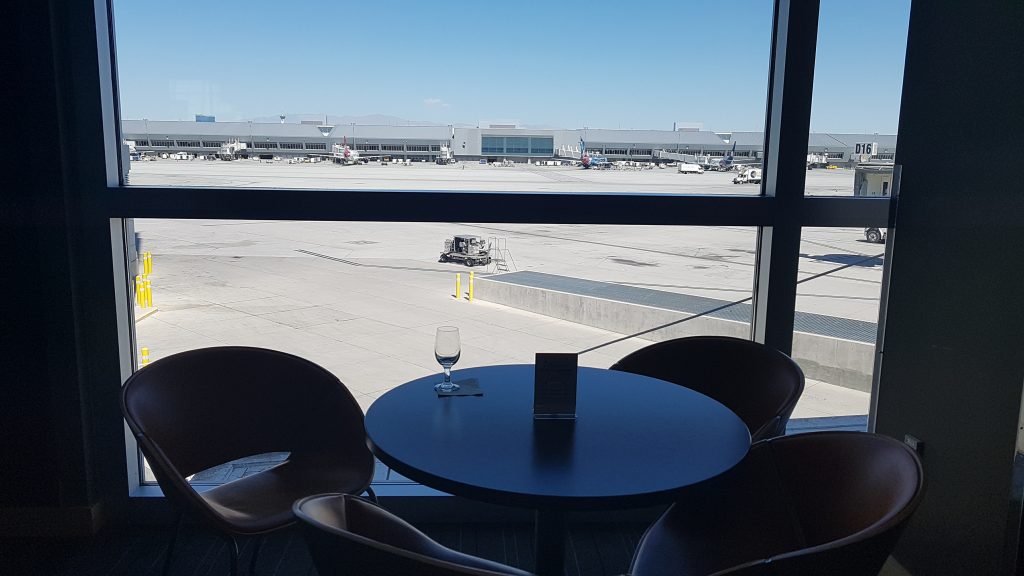 On the other side of the lounge in the “other” room, is more “loungey” seating, with a TV in the alcove to the left: 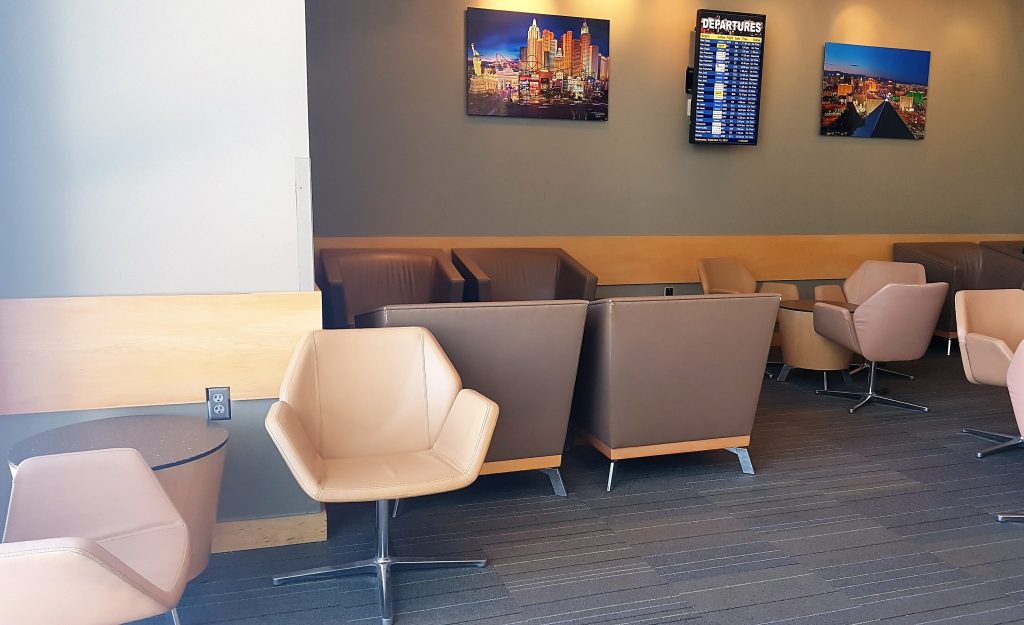 Not shown on this is the bar which was to the right where I was stood – I couldn’t take a photo as there was always a member of staff there and they didn’t want to be photographed.

The bar had the standard range of complimentary spirits, beers and soft drinks available. We opted for Beer and a Cranberry Juice: 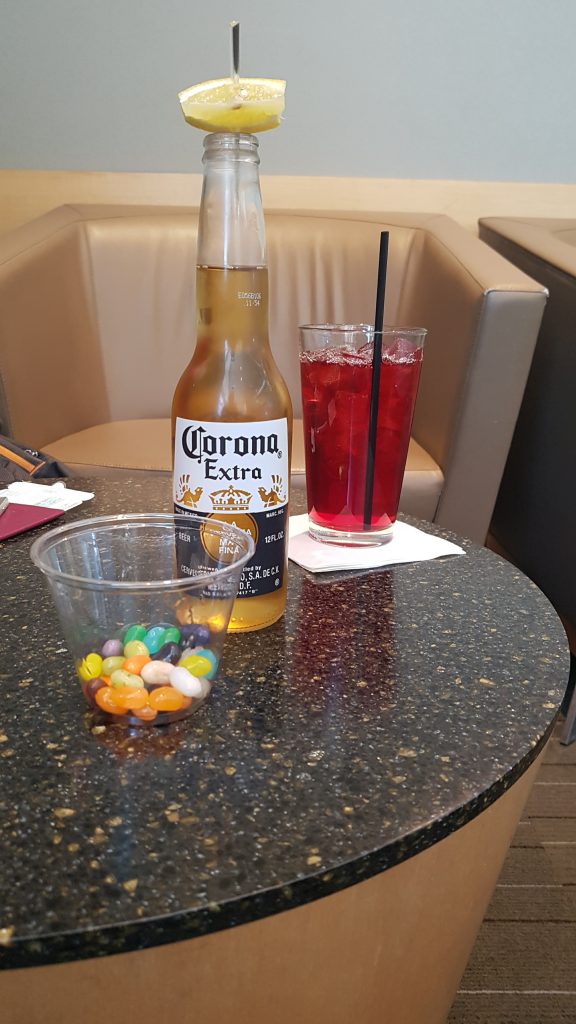 Just behind the reception desk was another snack table, with savoury snacks and jelly beans: 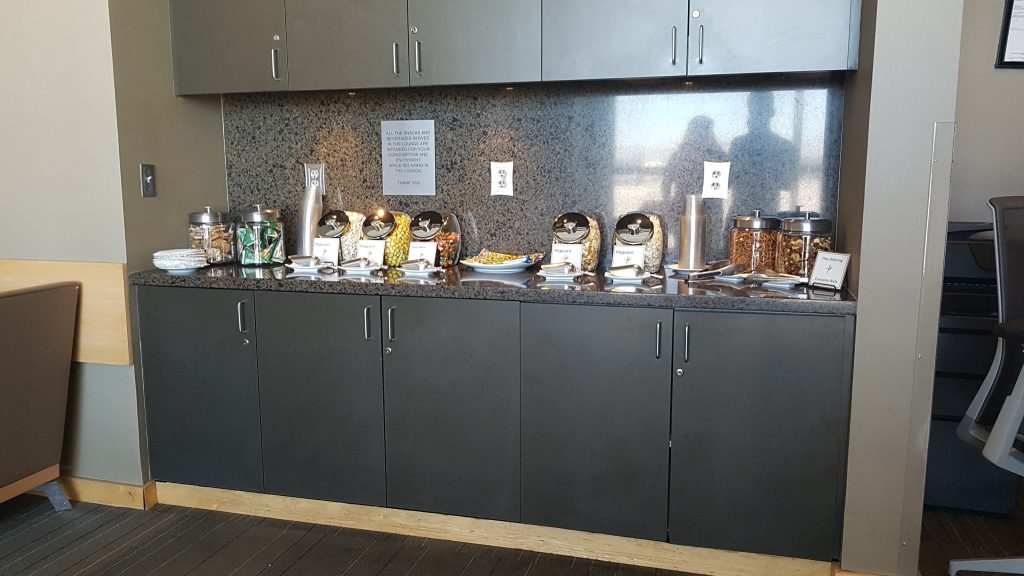 Let’s face it – this place is never going to win any prizes for being a luxury airport lounge. The food selection is rubbish – don’t come here hungry, there’s limited seating and nothing for kids. Most people that walked in were actually looking for the Centurion lounge and walked out again.

However – it’s not all bad:

As we were in Las Vegas, there were the mandatory slot machines right by the gates, just in case you happened to have any money left that you wanted to lose before departure (or indeed to start your gambling as soon as you land if coming off an inbound domestic flight! – in most US airports you arrive through the same gate and terminal areas as you board for Domestic flights) 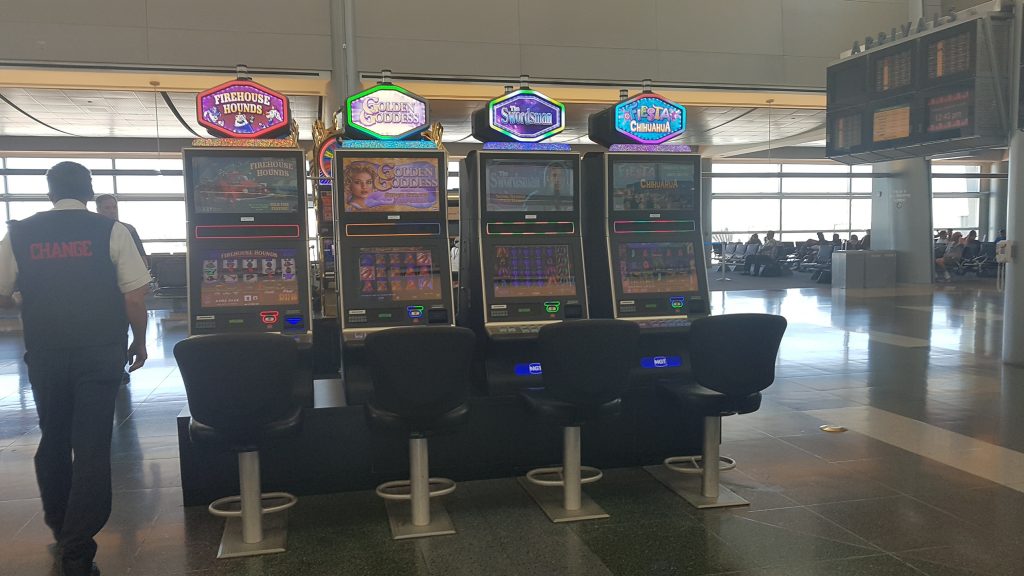 The gate agent announced boarding shortly after we arrived, stating the flight was completely full and asking for volunteers to have their hand luggage gate checked due to a lack of space in “Coach”.

First Class passengers were invited to board first, and we were quickly aboard.

I had selected seats 1D and 1F which gave us a few extra inches legroom given they were bulkhead seats, but I chose these seats mostly so we’d get our drinks first on this very short flight!

Waiting at our seats was a packaged fleece blanket. The headphones are my own, there was no IFE on this particular aircraft although there was WiFi: 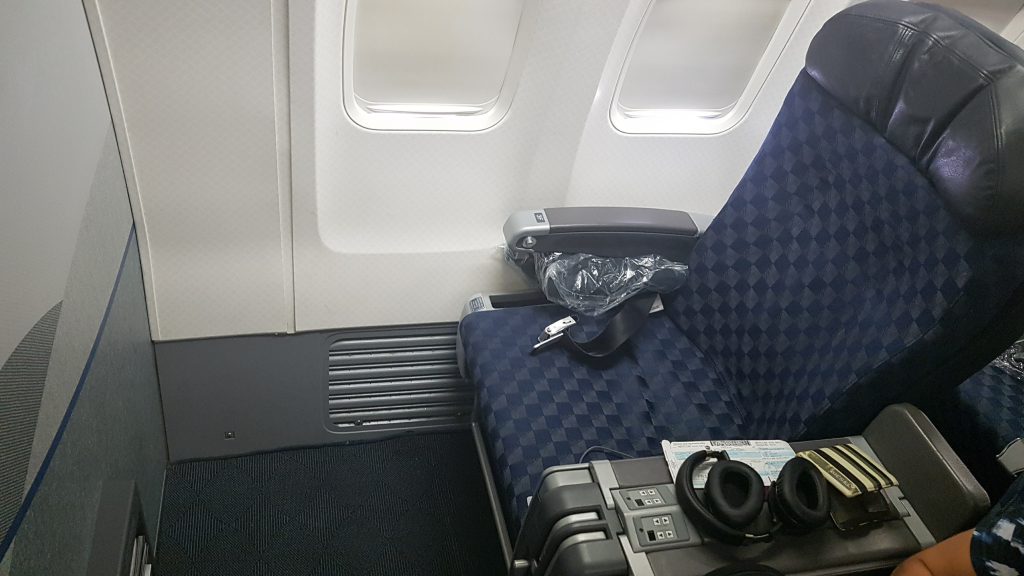 American Airlines Domestic First Class is essentially the same as what you might expect in European Longhaul Premium Economy. As we had bulkhead seats we had a little more legroom, but the rows behind us looked perfectly comfortable with plenty of room.

The seat looked a little old and tired, but was clean and functional. For a 45 min flight who cares!

There was plenty of space in the overhead bins for our hand luggage, thanks to the 2-2 layout.

Due to traffic, we were a little late taking off and didn’t get in the air until about 2pm. Take-off from Las Vegas McCarran is great given its proximity to The Strip so you get great views: 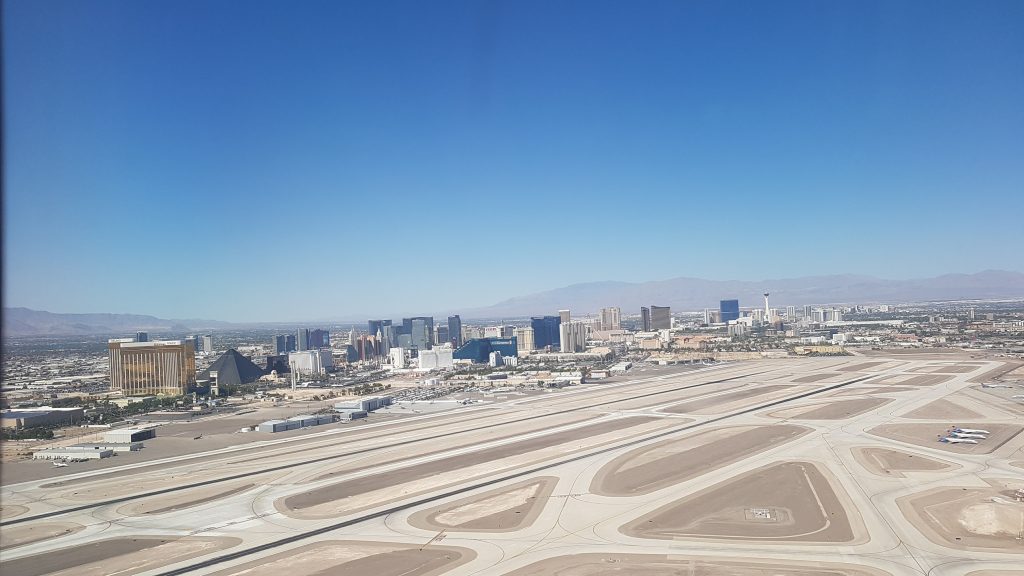 As this is such as short flight, there is no meal service. Instead AA offer a drinks and snack service in First, with one dedicated flight attendant. 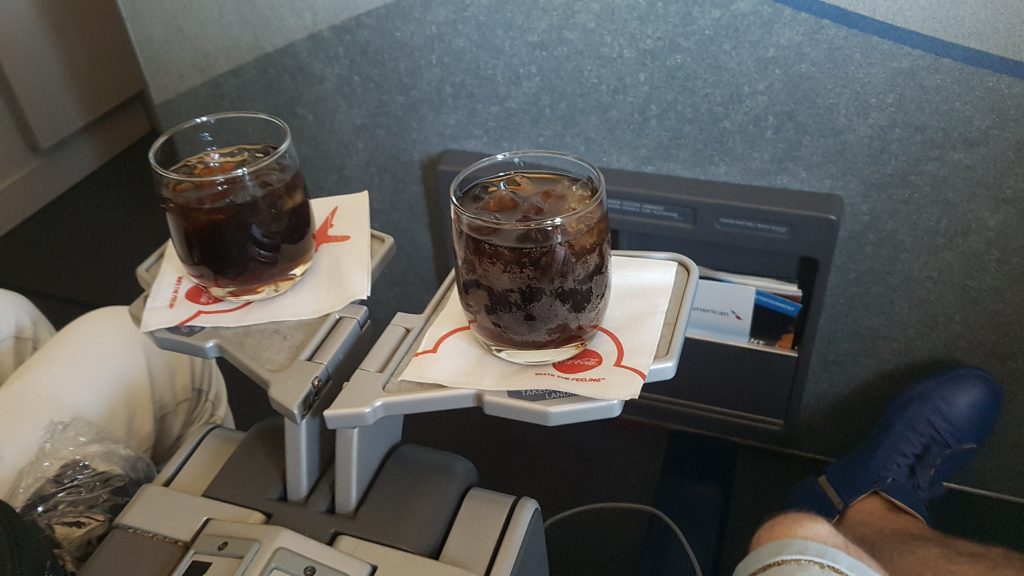 We opted for cokes – which were served in proper glasses.

As we were in 1D and 1F we were second to be served. Those towards the back of the First cabin had to wait about 15mins to have their orders taken and drinks arrive as there was only one flight attendant – a big deal on a 45min flight!

After finishing the drinks service, the flight attendant passed through the cabin with a basket of pre-packaged snacks for you to select from. I had some interesting coconut cookie type things – which were very nice. We were even encouraged to take seconds if we wanted.

No sooner had we taken off, we were finishing our flight over the mountains and were travelling over the sprawling concrete jungle that is Los Angeles.

We landed at LAX on runway 24R. This meant we had about a 15min taxi across to the otherside of the airport to Terminal 6.

Disembarking was extremely quick as we were in the front row – straight through to baggage reclaim where our bags appeared about 10 minutes later – thanks to their “priority” tags there were practically first off.

Overall, I believe flying to Los Angeles from Las Vegas was a much less stressful option than the 5 hour drive. The fact that First Class when travelling with baggage actually worked out cheaper than Economy is a real plus, and when comparing car hire with one-way fees and fuel, you’re not too far off what I would have spent anyway.

The Club at Las Vegas is an alright lounge for a short stay – although I wouldn’t look forward to a long layover here. If I was delayed I’d probably head to the Centurion Lounge and pay the $50.

I also earned 60 Tier Points and 354 Avios! (Although from 12th November, for travel after 12th January, you will only earn 40 Tier Points as American is reclassifying First Class booking classes on 2 class aircraft to Business rather than First).