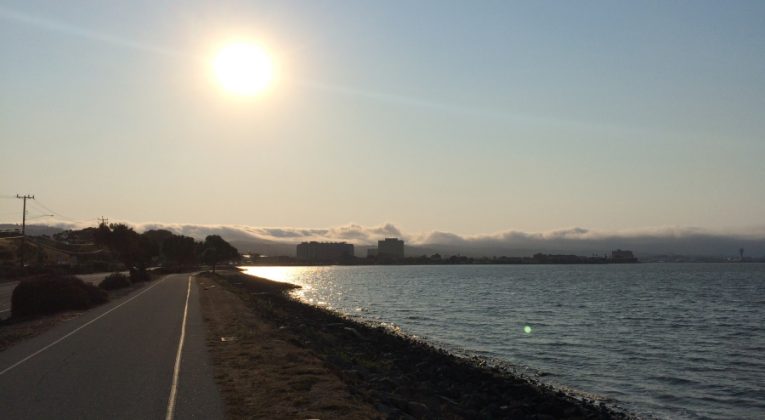 Located a short shuttle ride away from the International Terminal at San Francisco International Airport, the Crowne Plaza is a great option for a night near the airport.

I spent two weeks in California over the summer and had an amazing time. One of my top tips when flying West is to get to your destination, stay up as late as you can, which in my case was about 9pm, and then crash. For this, you may need a hotel near the airport – I certainly don’t like to drive straight away when getting off a long-haul flight. There are plenty of options in the area, but my status with IHG and the ability to pay with points meant I could stay at the airport with no cash outlay.

I am a Platinum Ambassador and was given 600 IHG Rewards points on check-in. As we were already in an Executive Room there was no room for an upgrade.

The hotel was very dated, and would have been cool in 1976. The room was fine, and most importantly the bed was comfy. 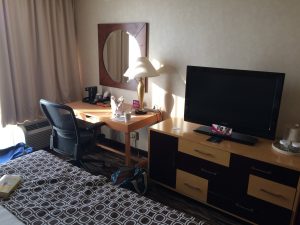 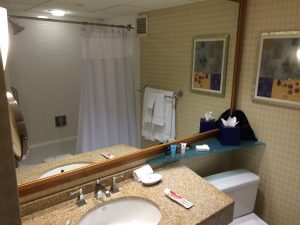 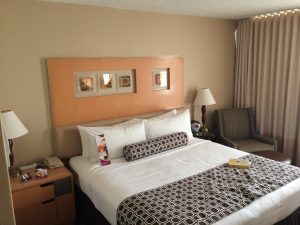 Opposite the room was the Executive Lounge – the worst example of one I have ever been in. It had a pretty appalling coffee machine and a few tables; still, it was better than nothing! 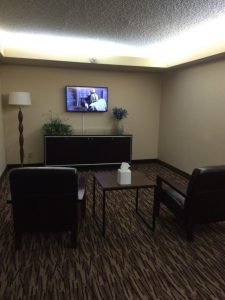 The service throughout the hotel was excellent. Staff were friendly and efficient, going above and beyond expectation. Take breakfast for example: we were not expecting much, given the rest of the hotel, but were pleasantly surprised. 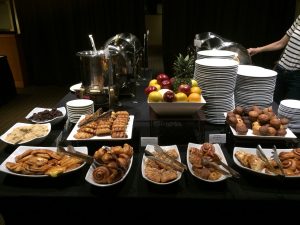 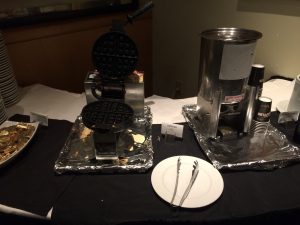 We were shown to a table and offered juice and coffee before being let loose on the buffet. There was a ‘make-your-own’ waffle machine, fresh fruit, pastries, 5 types of bread, yoghurt, eggs, home fries and oatmeal to name but a few of the options.

The hotels in the airport area operate a free shuttle bus from all terminals. We waited about 5 minutes before our bus turned up and were at the hotel in less than 15 minutes – I think we had a plane to airport time of an hour which was a lot less than I had anticipated.

The hotel also had a pool and a fitness centre. The pool was tiny, but well-used by families. 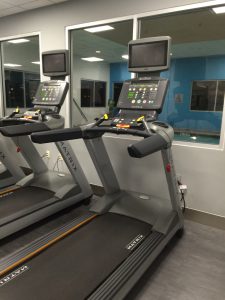 The fitness centre was great, and allowed me to do a bit of a workout. It was about 4am UK time when I was on the treadmill, but I think that it helped to reset my body clock. The hotel is also next to the bay, so you can walk or jog by the water’s edge, should that seem preferable to a treadmill… 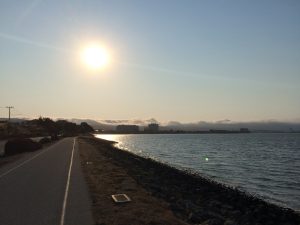 I paid 40,000 IHG Reward points for the night, which compared favourably to the $299 asked for at the time of booking. I did make the mistake of amending the booking which ended up with a cancel and rebook – as this was after the revaluation of some IHG hotels, my cost went up from 30,000 to 40,000 points. Despite getting in touch, there was nothing that IHG could / would do – a lesson learnt!

Aesthetically, the hotel will not win any awards, but all the staff were friendly and it was very comfortable. Whilst I would not recommend it as a base for staying in the San Francisco area, it is perfect for a stop-over for one night if you are arriving late or setting off early in the morning.

My top tip is to book into an Executive Level room as this will include the buffet breakfast for free. This is even better when you realise that there were 3 categories of room available for booking with points (King / Twin / Executive) and all were the same price, but only the latter gets free breakfast.