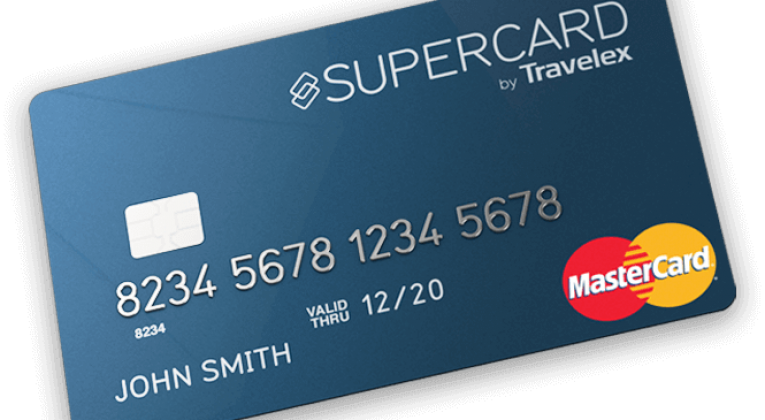 Having just spent 3 weeks in the US, I had plenty of opportunity to try out my Supercard. For those who don’t know, Supercard is offered by Travelex, a large currency provider in the UK. Rather than the Supercard being a credit card, you link it to one or more existing credit cards and when you spend in a foreign currency, Supercard convert at the Mastercard wholesale rate. This means your linked credit card is billed in pounds sterling, avoiding any overseas currency fees. 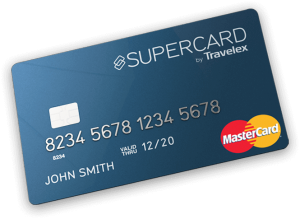 Now I know there are other cards that offer fee-free overseas spending (I even have one), but they typically offer no rewards for this, and that’s important to people like us. Sadly, you cannot link Supercard to an American Express card, but can link it to a UK issued Visa or Mastercard such as the Hilton– or IHG-branded credit cards.

I didn’t sign up for the original pilot, so had no previous experience, but liked the idea of linking to my Hilton HHonors card to boost my haul of HHonors points. The only way to apply for this card is via the mobile app (iOS or Android), so sadly there are no cashback or referral opportunities here 🙁

OK, so the principle sounds good? In fact I think it is a great idea. However, there are some issues in the implementation that have caught me out, and I wanted to share my experiences to help others.

For those not familiar, this is the process that occurs when you check in to a hotel, and they “reserve” some money to cover incidental spending. When travelling, this happens a lot, so a card aimed at travellers should support this, you would think. Well, technically, Supercard does not. To be fair to Travelex, this is mentioned in the help section of the app: 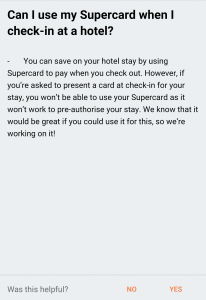 In common with most honest people, I have to own up to not reading all of the T’s & C’s beforehand so was not aware of this limitation. From reading the above though you might expect this to fail when you try, but that is not the case. I used mine for a handful of pre-authorisations, all of which posted to my linked card pretty quickly.

The problem only became apparent when checking the statement on my card to find that both the initial pre-authorisation AND the final settlements were still on my linked card account. When I checked on the Supercard app only the final one showed. This was still the case 2 weeks later, so I called Supercard who confirmed this was a known issue, and would be reviewed. The following day, all of the errant transactions were credited back to my linked card. I have not so far received any replies from Supercard support, so I am not sure if they manually added the credits, or they coincidentally posted that day. I suspect it was a manual intervention as there was a week between some of the transactions and yet they all got credited back to me on the same day.

Fortunately, this was resolved and didn’t cause me any problems, but if I was running close to the credit limit on my linked card, this could have got me into difficulty.

There are a number of other situations where Supercard does not work (again, all listed in the app’s help section). 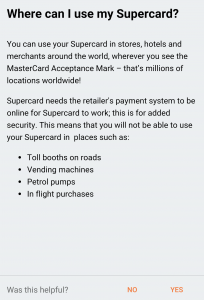 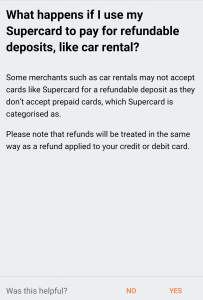 I can confirm this did not work in a vending machine, but did work at a petrol pump (although it pre-authorised $1 and only updated to the actual value a week or so later – see above ref: Pre-Authorisations)

This question has always confused me when paying with a card in the US, but Supercard should be used as Credit, which sounds contrary to the above that tells us it is categorised as a prepaid card. I know I chose the wrong option a couple of times and it failed, usually with a misleading error like “Invalid PIN”, which I knew it wasn’t.

I had seen some comments on other blogs and forums where a particularly poor exchange rate had been applied, and even “corrections” to transactions posted a few days later if the exchange rate worsened, but I saw none of this on my trip. The rate varied between $1.28 & $1.32 during my trip. I saw minor variations across multiple transactions on the same day, but just fractions of a cent difference which I presume is down to the date when it was processed, which can vary from the date of the actual purchase.

At one point I noticed two identical “Pending” transactions from Supercard on my credit card, where I knew I had only made the one purchase. At that time, they were not showing on the Supercard app at all. I also queried these with Supercard support and am yet to hear back from them. Both transactions have now disappeared from my credit card account and neither is reported in the Supercard app. I will be keeping an eye out to see what happens with those.

To be a viable travel product, pre-authorisation support is an absolute ‘must have’, in my view, so this needs sorting. In the meantime, if you are travelling with a Supercard, my advice is to keep an eye on your transactions, both in the Supercard app, and your linked credit card. For any problems, there is  a UK geographic number (020) to call for support, and in my experience, this was answered promptly, and followed up with an email containing a support reference number to enable me to provide more information.

I am undecided if I will continue to use the card, I think I will give it a try once more on my next overseas trip to see if things have improved, but I would want to know that they have ironed out the issues I experienced.