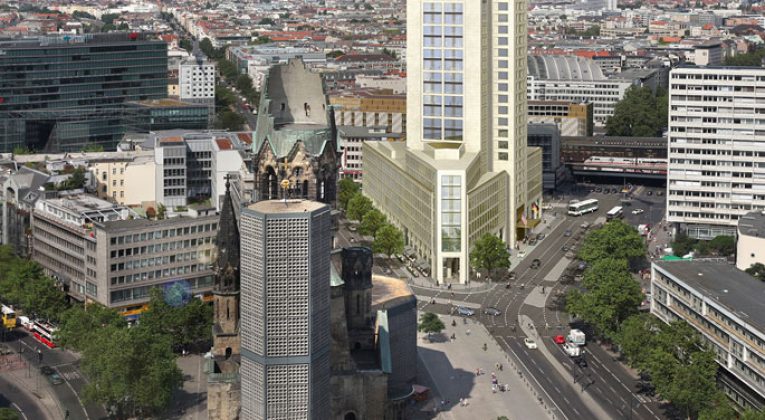 Berlin has always been one of the major European cities I feel is often overlooked – with most people aspiring to visit the classic romantic destinations of Paris, Rome or Barcelona rather than the edgier, and grittier, German capital.

However, at the beginning of July, I had a few days holiday from work, a free weekend night certificate from my Hilton HHonors Barclaycard that was about to expire and a desire to escape the British monsoon summer season.

Keen to maximise the value from my free night certificate without going crazy, I shortlisted European destinations with either a Waldorf Astoria or Conrad – and then compared the cheapest flights to those locations. Ultimately, Berlin came out at under £80 each return for the flights and had a reward night available at the Waldorf Astoria Berlin on my preferred date – so off we went!

The Waldorf Astoria Berlin is located in West Berlin, directly opposite the Zoologischer Garten station near to the main high-end shopping street of Kurfürstendamm (commonly known as Ku’damm). 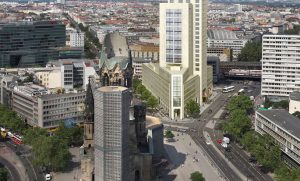 Whilst not in the immediate vicinity of the most well-known Berlin tourist attractions such as the Reichstag, Brandenburg gate or TV Tower, the Zoologischer Garten is a large rail station with regular S-Bahn, U-Bahn and regional rail services meaning you can be pretty much anywhere in central Berlin zone A within 15 minutes.

As one of the tallest buildings in Berlin, you won’t miss it as you walk out of the station, and can often spy it from across the city – such as from the top of the Reichstag in the picture below 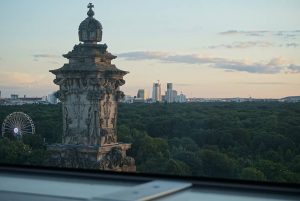 I have the Hilton HHonors app on my phone, and have linked it to my HHonors account. The day before our stay, a notification popped up asking me if I wanted to check-in and pre-select my room. This was my first experience with Hilton’s new online check in and I was impressed. We had only booked a standard room, however they don’t seem to have crammed these all into the lower floors and I was able to select from at least 3 different rooms on every floor up to the 15th which is the top non-suite floor. 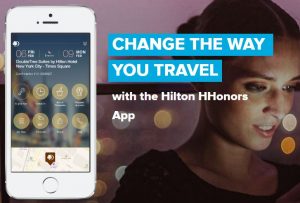 The app shows how many of your room type are available per floor, and then gives a floorplan outline of each of the rooms and facilities on that floor – really cool, and definitely helps if you want to stay away from the lifts for example or want a high/low floor specifically- so I went for room 1512 with views back across the train station and Tier Garten park.

On arrival at the actual hotel, we felt a little underdressed as other guests seemed to all be arriving in their Mercedes town cars and allowing the doormen to handle their designer luggage whilst we rocked up in our jeans with backpack carry-ons from the U-Bahn, but I certainly didn’t feel any less welcomed by the staff.

The lobby is typically opulent, lots of marble, dark woods and flowers everywhere, as you’d expect from a hotel of this level. We were able to check in immediately, and the receptionist was very friendly but efficient, recognised my (lowly) Silver HHonors status (obtained via my Hhonors Barclaycard) and thanked me for checking in via the app. Our room was available immediately despite it only being 12pm, she highlighted that as a Silver HHonors member I was entitled to free Wifi and to ignore any charges on the login page as they would be removed at checkout. She then asked if we needed any help with luggage (I assured her we could handle our backpacks!) and then escorted us to the lifts personally to show us how they worked in terms of having to swipe your room key. Overall – seamless and to a very high standard.

No upgrade was offered, nor did I attempt to swindle one having already selected my preferred room via the app, and given I only had Silver status at the time I didn’t want to push my luck asking for one when staying at a 5-star hotel on a free night certificate! 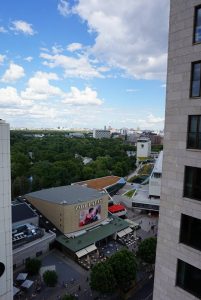 Despite being a standard room – I have to say I was impressed. The room was spacious, with a large wardrobe and minibar area in the corridor from the door with Nespresso machine, large king size bed with plugs on the bedside table, desk/dining table with two chairs, dressing table, two full height windows (that actually opened a tiny bit despite being 15 floors up – it’s always nice to get a bit of fresh air), and a massive bathroom with marble surrounded bathtub, separate shower cubicle with rainfall shower and separate flexible head and toilet partitioned with a frosted glass door. The only negative I could find was the rainfall shower had most of the holes blocked with limescale; I believe because it was too high up to be easily cleaned given the very high ceilings, but it did slightly take the shine off the otherwise immaculate and beautiful bathroom.

Entertainment-wise- the room would meet every techie’s needs, with a large 40” TV was mounted on the wall, with Apple TV, built in internet with wireless keyboard, optional HDMI input, and the piece de resistance – a separate TV screen within the mirror in the bathroom with local speaker so you could watch a different channel from the bath! 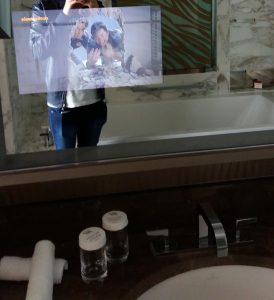 The hotel features a gym, spa, sauna, steam room and pool. Unfortunately we did not have chance during our one night stay to visit these facilities. The spa treatment menu looked lovely, but definitely had 5* prices as well!

As I had booked via a Free Night certificate, and only had Silver status at the time, breakfast was not included in our stay rate, nor did we use any of the bars or restaurants as we found a lovely Biergarten near the Reichstag instead! The prices from what I saw from the room service menu and in the hotel information actually seemed reasonable for the product they appear to be offering.

I’m not aware that there is a specific separate exclusive club lounge at this hotel – I couldn’t find mention of it on the website and it wasn’t mentioned to me by staff at the hotel. What there is however, is an area called “The Library” on the 15th floor. This is a lounge area that is open to all guests, and you can order afternoon tea or drinks at a charge. It has wonderful views over the nearby Kaiser Wilhelm Memorial Church and the zoo.

In a word – excellent. Notwithstanding the limescale blocked showerhead, I would still rate this hotel as definitely deserving it’s 5* rating and felt my stay reflected that.

The Waldorf Astoria Berlin met all my expectations of what a modern 5* hotel in a European capital city should be. The rooms are extremely well appointed and spacious, with added touches which make it a little more special, such as the TV in the bathroom mirror and Apple TV.

The location is excellent, directly opposite a major train station which means you can get anywhere in central Berlin in under half an hour, and most rooms seem to have excellent views over the Tier Garten.

The rates are at the higher end for Berlin, however as Berlin in general seems to be priced much more reasonably than say London or Paris, I would say the price is acceptable for a short luxury city break, especially if you can fix your travel plans and book a non-refundable rate which seem to be available for around €160/night. Given the high standard of the King Deluxe rooms, I wouldn’t feel it necessary to pay for an upgraded room, and would just see any status-based upgrades as a nice surprise if offered on check-in!