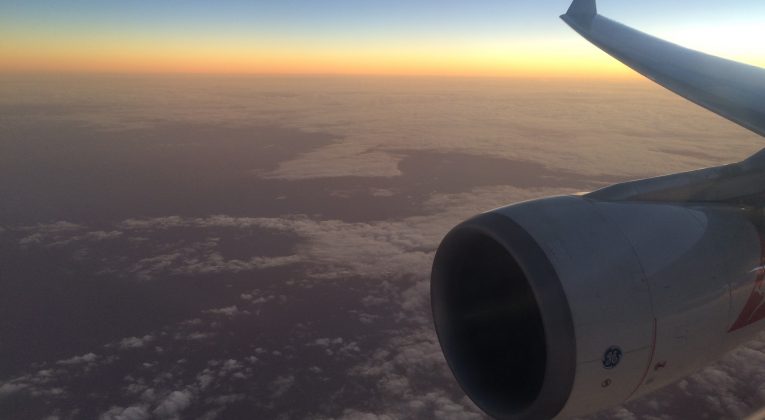 After my stay at the InterContinental hotel in Bali, I flew with Thai Airways in Economy Class to Perth. From Perth I would fly to the Cook Islands via Auckland. I had used American Airlines to book the award ticket to Auckland in Qantas Business Class. The ticket only set me back 17,500 miles and a couple of Euros in taxes.

The first flight from Perth to Melbourne was on an Airbus A330-200 and the subsequent flight from Melbourne to Auckland was on a Boeing 737-800. Both flights were in Qantas Business Class, what follows is my review of these flights.

The award ticket I had booked was a real bargain to be honest, with me getting two flights in Business Class for a very small number of miles. I had collected these air miles during two mileage runs I had done in the Autumn of 2015. The ticket proved very easy to book through the American Airlines website. No hassle over the phone, just a few clicks online.

I had never flown with Qantas before, nor had I been to Australia. But as there’s a first time for everything, this would be another adventure I could add to my experiences on this once-in-a-lifetime trip.

I landed in Perth just before 8am and made it through immigration and customs without much hassle.

In particular, I didn’t need to wait very long for a bus to come.

From the time I arrived in Australia, I had already lost count of the numbers of times that someone had called me “mate”. A stereotype that proved to be right! There was a very friendly lady at the Business Class check in who asked me where I was heading. Her jaw dropped when I told her about my journey so far and that I was heading towards the Cook Islands.

After checking my passport, next award tickets and hotel reservations I received my boarding pass for the flight from Perth to Melbourne. If you travel like me on a lot of different one-way award tickets, make sure you have printed copies of everything! This will save you from so much trouble.

My flight would only leave at 12.55pm so I had plenty of time to go the Qantas Business Class lounge and relax for a while.

The Qantas Business Class lounge at Perth airport is quite big, something you wouldn’t expect when you walk in through the small entrance. But when you walk further into the lounge, you’ll see a lot of different seating areas. More than enough space to host a large number of passengers.

I managed to find a quiet spot all the way at the back of the lounge, but due to the early time of day, the bar wasn’t open yet. I didn’t feel like leaving my belongings behind every time I wanted to get something to drink or eat, so moved to the central part of the lounge.

The staff in the lounge were very friendly. As soon as I sat down on my new spot, a man approached me and asked me if he could get me something to drink. I’ll never pass on a good cup of tea and a glass of orange juice. Shortly after he came back with freshly made tea and the orange juice, lovely!

There was a breakfast buffet, nothing too fancy but it was just what I needed. Some scrambled eggs, toast, bacon and veggies. After a while the staff even came around the lounge with trays of appetizers. The chefs in the kitchen were testing out new recipes and they wanted feedback. Good stuff!

When the bar did open, it had been a couple of hours since I’d had a drink, and I’d started showing signs of withdrawal… Just kidding! I just wanted a glass of bubbles. So I spend the last couple of hours drinking champagne and catching up on InsideFlyer.

As the gate wasn’t too far away from the lounge, I stayed at the lounge till the last minute. That way I could have an extra glass of bubbles, naturally.

The time had come to finally board my very first Qantas flight. I was on board as one of the first passengers and quickly found my seat. I was quite surprised to be honest when I saw my seat, it looked very comfy! Indeed I was so surprised that I completely forgot to take any proper pictures of it. Here’s the Qantas stock image, anyway: 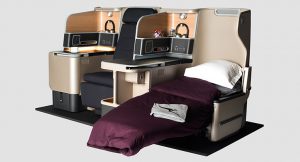 One thing was certain, I had plenty of legroom. What a joy and improvement compared to my previous flights on Thai Airways in Economy Class. This would be a very relaxing flight.

The crew came by with some drinks before departure. Either water or orange juice was on the menu, so I picked the vitamin C.

I wanted a light meal during this flight as I’d had plenty to eat when I was in the lounge. It’s not a good feeling sitting on the plane with a stuffed stomach.

The tuna was an excellent choice, it was very tasty and cooked to perfection. Indeed it was just enough food to fill me up for the rest of the flight.

The remainder of the flight I spent drinking gin & tonic. I lost count in the end, as they kept bringing refills. It almost made me feel like my time on Qatar Airways flight in First Class. It feels a little bit like the crew is trying to get you drunk, and I should quickly add that’s not a complaint.

Business Class on the 737

Other than some turbulence, nothing much happened on the first flight. Before I knew it, I was in another lounge, this time at the airport in Melbourne. Much to my surprise, I ran into my friend JD again!

I don’t know if the glass of whisky was really big or the can of coke was so small? I wouldn’t be able to tell you anymore… The legroom on this flight was way less than on the previous one, but I couldn’t care less.

I quickly snapped a couple of pictures of the seats next to me. After that I put on my headphones and just wanted to fall asleep.

My seat mate onboard the 737-800 was a very nice bloke from Scotland, who (like myself) had had a couple of drinks too much. The situation was hilarious, at least we thought it was. As our pre-departure drink we had both ordered a glass of champagne. But I had also ordered an additional glass of orange juice, I was thirsty you know…

Before we knew it, the stewardess put a glass of champagne and orange juice on the tray table. I thought both were mine, so drank both. The Scotsman turned to me: “Did you just drink my champagne?”. I replied: “I don’t know… I just saw it was there so I drank it…”

“I would have done exactly the same mate, let’s get another glass for both of us, cheers!” This would turn out to be a pleasant flight!

Both of us wanted to eat something and both of us ordered food. But neither of us ever saw the food arrive. After landing in Melbourne the crew told us that we passed out in a matter of minutes.

The flight in Qantas Business Class on the A330-200 was good. I had a good seat, plenty of space and legroom, good food, plenty of drinks and a fantastic crew on board. The flight on the 737-800 was ok, the plane was a bit outdated. But due to my condition I didn’t notice much of it, instead I had a good sleep.

Would I ever fly Qantas again? Of course! Especially as you can book award tickets for very reasonable rates with OneWorld miles.