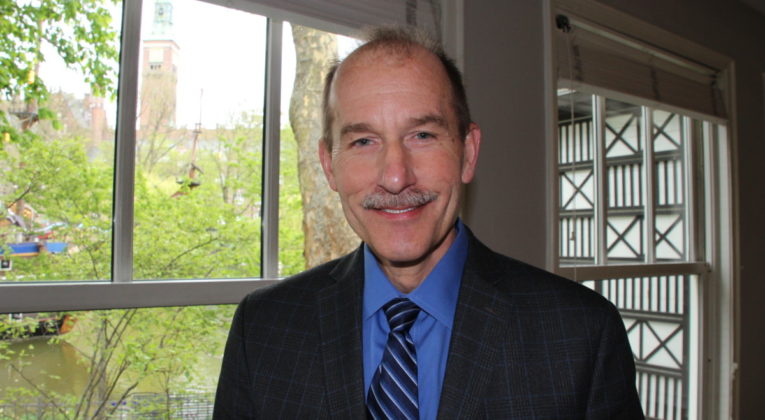 Jeff Skiles (‘Miracle on the Hudson’ co-pilot to Captain ‘Sully’ Sullenberger) was in Denmark to give a lecture last Thursday. InsideFlyer caught up with him to ask about the lecture, the famous incident, and his wider career.

We meet Jeff Skiles at Nimb Hotel in Copenhagen, before taking a walk through the Tivoli gardens to the meeting room where we are set to conduct the interview. During the walk, Jeff – a friendly and reassuring presence – talks about his first few days in Copenhagen:

My son did a semester of his education here in Copenhagen. It’s unfortunate that I didn’t visit him here. Copenhagen is wonderful!

We take our seats at the large table, and Jeff orders an Americano (“no sugar or milk for me”), before beginning the interview,

A story about the aviation industry throughout the last 30 years

Our first question is about the key points of the lecture, and before we even finish asking, Jeff leaps in enthusiastically:

My lecture is essentially a story of how the way that we operate in aviation has changed throughout the 32 years that I have been a pilot. Those changes are what made our success possible, on that landing in the Hudson.

Today we operate as a team, and we are constantly teamworking on our flights. That is what I want to show – both passengers, and also aviation professionals. What is important, is that we pilots listen to each other, and constantly motivate ourselves to perform better. As I usually tell my colleagues; you will only be judged by the moment in your career where something goes wrong. So you gotta make that moment your best.

Jeff takes a sip of his coffee, before expanding on the importance of  teamwork in the cockpit:

Teamwork was absolutely essential for Sully and I. But the foundation for our teamwork was made a long time ago by US Airways. We knew our roles beforehand, and we both fell into these predefined roles very naturally. Sully was the captain, which means that he was my boss on that flight. However in our case, there was no time for Sully to give out orders. Therefore it was important that I could read him – and contribute where there was a need. It is something that we are trained for already by the airline.

Sully took the role as the one who primarily flies the aircraft by saying “my Aircraft”. I replied “your aircraft”. Therefore my role was then to troubleshoot, by for instance attempting to restart the engines, and make the aircraft ready for landing outside an airport. We each do out thing, but yet do it together. It’s almost like a dance.

“Roles changed, when we hit geese”

When the plane hit geese, Jeff was flying the plane, but at the moment when the impact happened, they instantly knew that roles had to change:

We both knew, immediately, how serious the situation was. Therefore I reached out for my ”quick reference handbook” (a handbook with checklists for specific emergencies) and started to look for the right checklist. However I realised that there was no checklist designed for our specific emergency and we had to trust our training to get the plane safely landed.

Altitude was traded for speed

When the geese impact happened, the plane was just 1 kilometre up in the air. That meant that Jeff and Sully didn’t have much time to get the plane landed safely:

We could see the speed dropping right in front of us, and we had to quickly regain the speed, to avoid stalling. What we needed to do was to trade altitude for speed. We had to descend about 1000 feet per minute, which gave us 3 minutes to land.

“It was obviously no ideal situation”

That’s how Jeff describes having to help land a plane with 155 passengers onboard in the Hudson River:

We increased our focus, instead of being scared. People are mostly scared of what they don’t know, but we felt certain that our training would bring us back on earth safely. Our passengers, however, were in a different situation. They only knew very little of what was going on – and all they could see out the window was a flaming engine.

We were busy in the cockpit for the whole 3 minutes and 20 seconds. We had a job to do, and I didnt even at one point think that this would not end well. We are trained for situations like this.

Jeff lights up when he is asked to what extent does shifting crews affect teamwork onboard. He explains that this is exactly one of the points that is most essential in his lecture:

Even in a small airline like US Airways, there were 5000 pilots at the time. That meant, that more or less every time I went to work, I didn’t know the other pilot in the cockpit – and the cabin crew I often didn’t know either. However, you do feel like you know everyone in the crew pretty well. That is due to our quite standardized training, as well as our strict policies and universal procedures we follow. This is what makes our teamwork work so well.

Sully and I never met before this trip. The trip was my first in a Airbus A320. Until this trip I’ve been flying the Boeing 737, but I just came out of A320-training. This was however not a problem. Sully is a very professional pilot, who follows all procedures carefully. I just received training in this aircraft type, and had just weeks before, performed multiple emergency landings in the simulator.

I went back to work after 7 weeks

We asked Jeff if being involved in such a dramatic incident ever caused him to consider a different career:

I went back to work after 7 weeks. From my perspective, I have been a pilot my whole life, and it was of course no nice situation that I had ended up in – but on the other hand, I don’t expect anything like this to happen to me again. Therefore I have no worries sitting in the cockpit, and neither had I when I first started flying after the accident.

Sully however only flew thrice after the accident – twice with me. But that was actually not due to the emotional baggage, but rather a change of career to teach and write books, that can help others learn from our experience.

The Hudson landing was just the beginning

Most people focus on the incident as the main event –  but for Jeff and Sully that was just the beginning of a long period under investigation by the FAA and enormous attention from the outside world. Jeff tells:

For one year and five months, Sully’s and my main focus was the ongoing investigation. We obviously didn’t know how it was gonna turn out. 3 minutes and 20 seconds – could we have missed something? They could have told us that if I had just flipped a switch or something, everything could have been different – you never know. Fortunately the FAA concluded that we did everything in our power to bring the plane back down safely.

But even 10 years later, the accident still affects my life: There has been made a movie about the event, I get interviewed with you here today. I’m sure that it will affect my life forever. But that’s OK, because everything ended well.

With that final comment our interview ended – Jeff reached his hand forward for a handshake and held the door for us on the way out. A gentleman, as well as a hero to many.