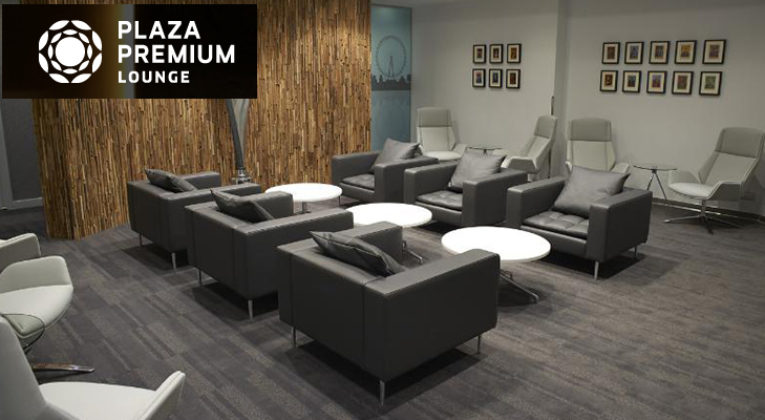 Plaza Premium, a world-wide independent airport lounge operator, have just opened their 5th (yes, 5!) lounge at London’s Heathrow LHR airport. This new one is a land-side arrivals lounge, in Terminal 3, their first in Terminal 3. It’s also their third (yes, 3!) arrivals lounge in Heathrow. But just how good is their new offering? We headed to T3 to find out…

Your first challenge, at least this side of October, is finding the lounge. Right now (August 2017), there are no signs for the lounge anywhere inside T3! When I quizzed the lounge staff on this, they looked a bit embarrassed, and said it was being worked on, but was still several weeks away. Apparently the builders were quicker than the person tasked with sorting the signs out! 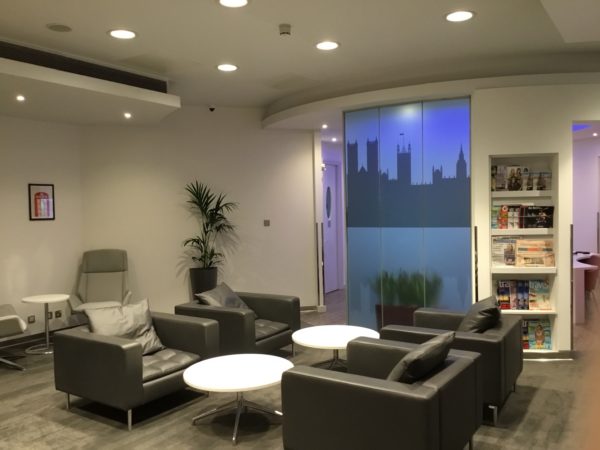 For now, you need to blindly head to local bus stop 17. When you exit baggage claim and customs, that’s largely straight on. If you follow signs for the Virgin Arrivals lounge, then instead of taking the lift upstairs, carry on outside and past a few bus stops, you’ll find it outside there. If that’s all too much for you, in a post-flight sleep deprived state, just ask your nearest purple-clad Heathrow Airport helper. They’ll be able to point you in the direction of bus stop 17 until the signs go up. (Don’t ask them for the Plaza Premium Arrivals Lounge, they don’t seem to know the name, just ask for The new arrivals lounge outside by the bus stop and they’ll guide you there).

Having found your way to the entrance by bus stop 17, you may hit a slight snag. Unlike all the other Plaza Premium lounges in Heathrow, this one doesn’t accept the usual Priority Pass lounge pass. I’m told that this should be fixed fairly soon, I guess the same person responsible for arranging the signs was also in charge of getting the Priority Pass terminal?

Based on the other Plaza Premium lounges in Heathrow, in the near-ish future, you ought to be able to get access with a Priority Pass lounge card, or a Lounge Club card, or similar. For now, you can certainly pay for access – it’s £25 for access including food or £15 for just a shower. If you’re lucky enough to have one of the rather expensive paid-for American Express Platinum Charge Cards, you can get in for free.

Once inside (guided by some Heathrow purple helpers), we were greeted by a very friendly staff member, who apologised for the lack of signage, and also for the lack of Priority Pass access. It took a little while to secure access with an American Express Platinum charge card, because the staff member struggled to use the terminal for that… Hopefully another thing that’ll be sorted soon! Once signed in, we were shown around the (very quiet) lounge, and directed to some free showers. 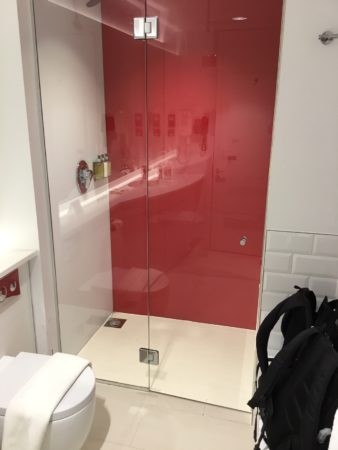 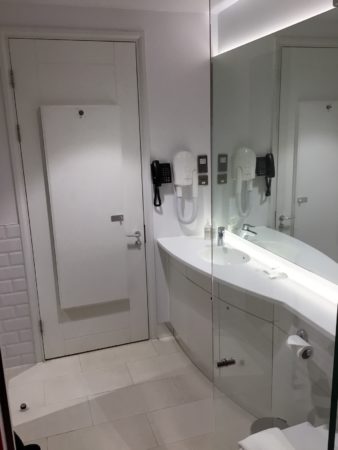 The showers were spacious, but a little short on places to hang or place your clothes. The water pressure was decent, but the water didn’t quite go as hot as I’d have really liked after an overnight flight. The shower had wall-mounted dispensers for shampoo, shower gell and conditioner, but these were un-labelled so I’ve no idea where the contents were from. It did the job though. No toothbrush was provided, nor were razers for shaving, which most airline provided Heathrow lounges manage.

Refreshed from a shower, it was time to grab a seat. Seating wise, the main area featured a mixture of 2 and 4 seat tables, with probably about room for 20 people to sit down. It didn’t feel cramped or croweded. 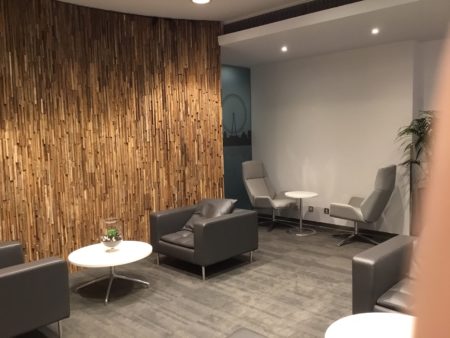 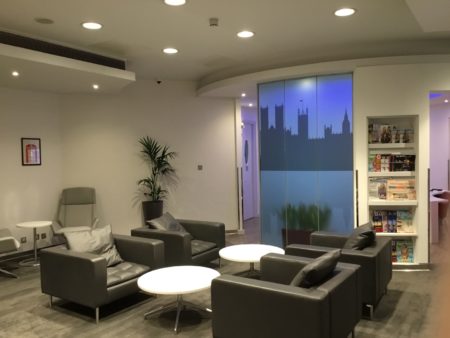 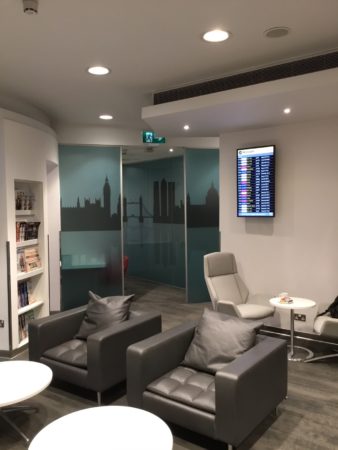 In addition, just off the main seating area was the “business zone”. This had 2 dedicated desks with seats and power sockets, with limited sound protection, in case you needed to do some work. There wasn’t a door though, so people sat nearby would still hear you calls. 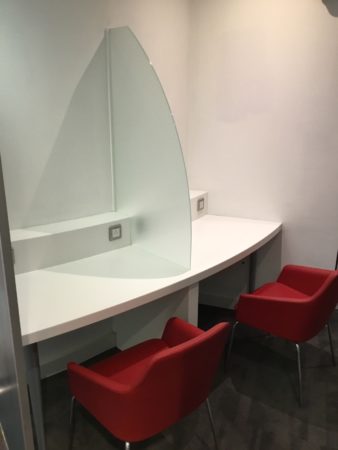 The lounge has free wifi, but no signs up with the password on, nor any handout slips of paper. I had to go and find the staff member to find the password. Once online, it was fast enough. For those who don’t want to get online, there were a small number of newspapers, and some magazines to read.

My big problem though was with the refreshments. After a shower, some breakfast is what I look for in an Arrivals Lounge. Here the new Plaza Premium T3 arrivals lounge lets you down. They have a second room off the entrance, with several tables, a coffee machine, and several fridges: 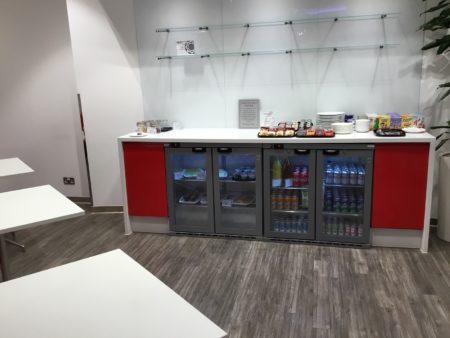 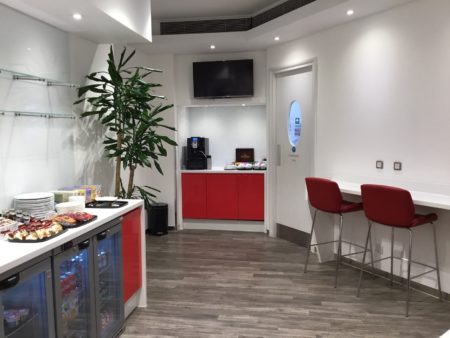 Sadly though, these fridges mostly hold drinks, and the food they have isn’t great. At 9am, they had some biscuits out above the fridge, and some variety packs of cereal. In the fridge were yogurts (fine but nothing special), and two trays of pastries + croissants + muffins. Unfortunately, these pastries were all hard and rather stale! There was no hot food provision available.

The coffee machine was a “bean to cup” machine, but I’m not sure what they’d put in the bean hopper, because the coffee that came out was pretty bad. All in all, the breakfast wasn’t up to the standards of a Holiday Inn Express free breakfast. If I’d paid the £25 entry fee, I’d have been rather annoyed…

As it was, for a shower after an overnight flight with no other arrivals lounge access, it was fine. However, the catering wasn’t anything like the standard I’ve found at other Plaza Premium lounges, so set your expectations low here.

With any luck, in a few weeks time, they’ll have sorted the lack of signs, and the lack of priority pass + other lounge card acceptance. Staff were friendly and helpful, it was very quiet (because no-one else could find it maybe?), but catering rather bad.

If a shower after a flight arriving into LHR T3 sounds good to you, more details are here on the Plaza Premium lounge. For Priority Pass holders, keep an eye on the Priority Pass Heathrow page to see when it turns up. Just don’t go there hungry, as you’ll need to grab a bite to eat in the terminal after, or at the Central Bus Station as I did before my bus home!

Otherwise, in Plaza Premium news, I hear that the Plaza Premium Heathrow Terminal 5 lounge is nearing completion of construction. With any luck, that’ll be up to the standards of their Terminal 2 airside lounge, and hence excellent! We’ll review that as and when it opens.