Yes, you read that right – Hawaii and Central America have been placed in the same region. I’ve genuinely no idea why – it’s clearly a bonkers way to organise things, but in this game we don’t ask questions when we see a gift, we just accept it with a smile…

Why is this redemption good? 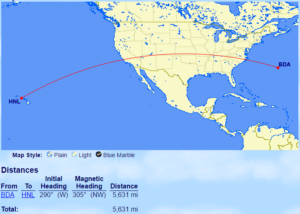 As you can see on the Singapore Airlines KrisFlyer Star Alliance award chart, the Miles required are 35,000 or 60,000 but that’s for a return, one-way is half the amount

Remember you’ll be flying with Singapore’s Star Alliance partners, so in this part of the world that means United, Copa (Panama) and Avianca’s Costa Rica, Guatemala and El Salvador subsidiaries  – which is great because it’s easy to hop about and there are no ‘surcharges’ for redemptions on any of these!

This helps a lot because to get from Central America to Hawaii, you’re going to have to route via the US on United, and you would get charged the higher amount of Miles if there was a difference.

Central America to Hawaii is a lot of flying for not very many Miles – but you can make it even better!

Why is this redemption amazing?

Basically – because of the KrisFlyer award routing rules:

The ‘bad’ (not really bad, but stuff you do need to know)

Ok, all that might sound a little technical, so let’s take a look at a concrete example of what you can do:

Say you book a cheap one-way flight to the Dominican Republic (Thomson and Thomas Cook both fly from the UK) or use Avios to get there. That’s the Caribbean, so definitely in the Hawaii + Central America region.

The Caribbean is nice, but you’d also like to visit Hawaii on this trip and would really love a few days in New York on the way too if possible – no problem –  United fly to Newark from Punta Cana, so Newark is your free stopover.

United also fly from Newark to Honolulu – so Honolulu is your destination.  You’ve only used up 2 of your 6 segments (segments are defined by number of flights with different flight numbers) getting to Hawaii, which is great. You might find that direct award availability from Newark to Honolulu is hard to find, but that’s ok – you can just use up an extra segment and fly via Chicago, Denver, Houston, Washington DC, Los Angeles or  San Francisco instead.

On the return, you could just route back to Punta Cana, but where’s the fun in that? – you’ve still got an open-jaw to use remember! Why not visit Costa Rica instead? – United fly to both Liberia and San Jose via Houston, Chicago or Newark (and Copa and Avianca fly to both from various places too). You’ve got 3-4 of your 6 segments left so having to connect on the US West Coast would be no big deal if required. 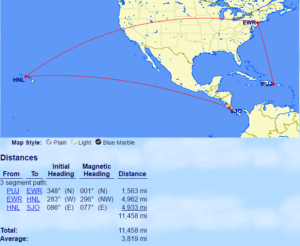 An Iberia Avios redemption back to Madrid from Costa Rica will set you back just 16,250 Avios (and ~ £100) off-peak in Economy, and obviously you can book cheap flights to/from Madrid from all over the UK or use Avios to get home.

I’ve not even got into using the 3 additional stopovers that you can pay $100 for here, but you can see the potential!

I usually find that the United MileagePlus site is the best way to look up Star Alliance award availability, but you will have to call Singapore Airlines KrisFlyer to book (UK office: 020 7531 2041).

Even if you don’t want to visit Hawaii, you can construct some incredible redemptions for very few Miles with the Singapore Airlines KrisFlyer programme. Next time you’re about to automatically transfer Amex Membership Rewards Points to Avios, take a minute to think what else you might be able to do with them instead!