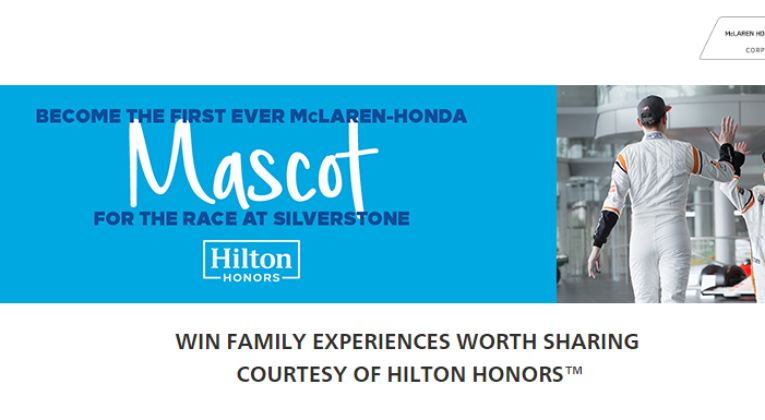 Hilton is running a great giveaway at the moment for fans of Formula 1 racing (and even if you aren’t a fan it’s still pretty good)!

As it’s a giveaway there is no need to stay or anything like that and entering only takes 10 seconds, so there isn’t much downside.

Note that the terms state you must be “a legal resident of Great Britain”, so the chances of winning probably aren’t too bad, relatively speaking. I’ve no idea why our friends in Northern Ireland appear to have been excluded.

“Hilton Honors and the McLaren-Honda Formula One Team have teamed up to give away two amazing experiences for both parents and children”.

There are 2 main prizes, which Hilton describes as follows:

1.    McLaren-Honda Team Mascot
Is your child a motorsport fan? Hilton Honors in partnership with the McLaren-Honda Formula One team are offering one child the opportunity to become the team’s mascot for the day at Silverstone on Sunday 16th July 2017.

2.    Family holiday in the sun
Hilton Honors are also pleased to be offering the chance to win a 5-night stay for four people in Abu Dhabi (at the the Hilton Abu Dhabi) ... Flights and two rooms for two people are included in the prize. You are free to use your 5-night stay any time before 1st January 2018.

Ten runners-up will also win one of ten McLaren-Honda caps signed by both race drivers, Fernando Alonso and Stoffel Vandoorne.

Simply head to this page here and follow the directions – it’s extremely quick.

You need to get your entry in by 11th June.

If you’ve got a racing obsessed kid, this could be the prize of a lifetime!

For the rest of us, it’d be a good day out, though I’d probably rather win the holiday to Abu Dhabi.