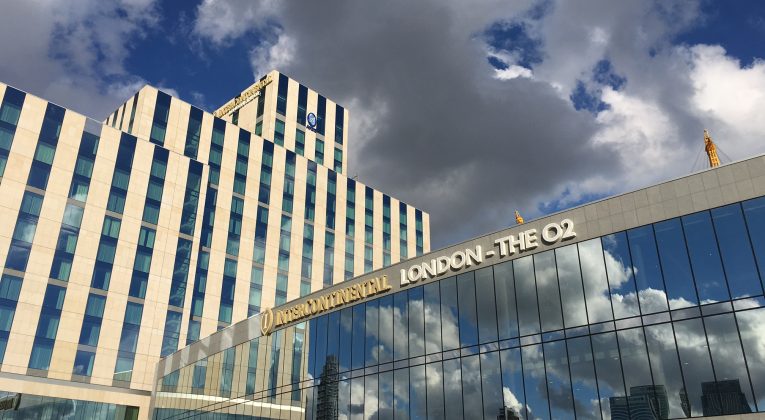 I recently took another micro-break in London. It is a concept I am really trying to push as it is such a fun way to spend time in the city you live. I have stayed at the Hilton Syon Park and the Sofitel Terminal 5 so far this year!

I wrote in another post about how I managed to get tickets for a sold-out Justin Bieber concert at the O2 using nothing but American Express points.  I don’t really like big crowds so I was reluctant to brave battling my way to the tube after the gig along with the other 15,000 Beliebers. Then I remembered that there is a very recently-opened InterContinental right next door.

I booked a room for the night of the concert using 45,000 points which is only 75% of the normal rate for an Intercontinental hotel. I am not sure if there was a reason for it being so low, but I think it might just be because it is a new property. This was not part of any special rate. I am a Platinum Ambassador with IHG and like to email in advance of the stay to ask questions, and to confirm upgrades and late checkout. Whilst this is not necessary I find that it makes the process smoother on check-in.

I arrived at the O2 on the tube, and was pleased to see that it was well signposted from the station, even if the signs were temporarily.

It was disappointing that the path to the luxury hotel was of such poor quality. I spoke with the doorman on my departure, who said that this was because the hotel did not own the land where the path was which meant that they were unable to just sort it out.

They were currently in discussion with the people who own the land to allow them to pave it.

I arrived at the hotel just after 3 o’clock and there were lots of people checking in who were clearly staying for the concert. This meant that the check-in desk were busy, and despite there being a dedicated IHG Reward Club check-in area, I still had to queue and go to the next available desk. This would not a problem, although meant the person checking me in had to go and get some additional information from the special desk.

My Ambassador status got me a upgrade to a Executive Canary Wharf view room and a 4pm check-out.

I am not necessarily sure that this is a view that can rival the likes of the Eiffel Tower, but it was a corner room with windows on two sides which made it light and airy.

There was a comfortable bed, a desk and an armchair, as well as a coffee machine. Later on the amenity of fresh fruit and chocolates were delivered.

The bathroom was large  featuring a really good rainfall shower and a full-size bath.

I really like the fact that the seal around the shower door was closely fitting so that no water spilled out onto the floor.

I had paid for access to the club, as the room rate did not include breakfast. The breakfast options at the hotel are very expensive and would have come to about £25 each for the breakfast buffet.  I therefore felt that £75 for two of us, which would include drinks, snacks, breakfast and other light refreshments was a good deal. When I arrived at the hotel they were serving afternoon tea which looked very good. I had a very good cup of coffee before making my way to the gym.

The gym is located in the spa complex. It is really well appointed facility with some first class equipment and lots of natural light.

I really loved the fridge with bottle of water and plentiful towels.

I worked out for a bit and then returned to the room before heading back to the club for drinks and canapés.

Between 5 and 7pm they offer a variety of alcoholic drinks, including wine, beer and premium spirits, alongside a large selection of canapés, crisps and nibbles.

This was really well done and the staff very friendly. After a couple of drinks we had out to the concert at the O2 next door.

As you can imagine the location meant that it was perfect for getting there quickly. There is a corridor through the back of the hotel which leads to the back entrance of the O2.

It had been suggested that this was a completely covered walkway, which was clearly not the case but it was close enough – although given the rain it would have been nice!

We had an excellent time at the concert, which you can read about in another blog post and I was very pleased that we had booked in given the speed that we were able to get back afterwards. We took the lift from the third floor down to the ground floor and were greeted with a sea of people.

Luckily for us the hotel is signposted to the left, where a doorman was only allowing people through on production of a key card. This meant that we were able to be back in our room before we would have made it round to the tube.

After a very comfortable night sleep, we headed down to breakfast which was, for us, the breakfast buffet was well laid out with a selection of cereals, fruit, cold meats and pastries.

There was also an extensive cooked menu too

We both chose something from that menu and sat down to wait. After 30 minutes I went to chase the order up with one of the staff. We were told that it would be about seven minutes, but had to wait a further 15. When it eventually did arrive, the Eggs Florentine that have been ordered had been replaced with Eggs Benedict. As a vegetarian I sent this back and we had to wait even longer. What was disappointing was the lack of communication from the staff in the lounge. There were only three other tables and whilst I understand that they use the same kitchen as the main restaurant which was, on a Sunday, undoubtedly busy, I feel that they could have done more to keep us updated.

After that slightly disappointing breakfast we made our way to the pool for a little swim. It was very well appointed, and we made use of the steam room as well before I went  on to use the gym. This was a little disappointing on the second day because there was no water and no towels. I told the lady on the desk that there was no water and asked for some, to which she proceeded to give me a bottle but did not refill the fridge. I showered and returned to the club just after 2pm when they were putting out to the afternoon tea service so I was able to have a light lunch of sandwiches, a scone and some soft drinks before checking out at about 3pm.

At checkout I made my disappointment regarding breakfast clear and was pleased that they offered a 20% reduction in the club charge, in effect making the eggs Florentine being free which I felt was fare.

I really enjoyed my stay at the Intercontinental-London the O2. It is a really new and well appointed hotel which is perfect for anyone visiting the O2 for a concert. Being an Ambassador, which guarantees the upgrade and the late checkout, meant that I was able to maximise my use of the club. If you arrive at 3pm and check out by 4pm the following day you could conceivably have afternoon tea, drinks and canapés, breakfast and then lunch for your £75 per room which, for two people is excellent value particularly if that is the only cost to this day when using points. There is a Holiday Inn Express nearby, but at 35,000 points for a night, you would be mad not to pay 10,000 more to stay at the InterContinental.