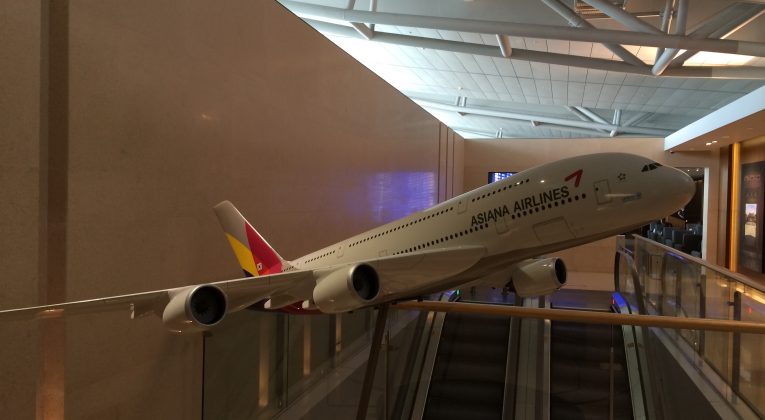 In my previous article I wrote about my trip in Air New Zealand’s business class from Auckland to Shanghai. I still was a long way from home, and somehow I needed to get to Europe. Before I started this trip, I managed to book a couple of award tickets by using some of my Lufthansa miles. This included tickets with Asiana Airlines in business class, from Shanghai to Seoul and onwards to Jakarta.

This article is a review of the two flights in Asiana business class. The first flight was onboard a Boeing 777-200, the second flight was on an Airbus A300-300.

After my long flight from Auckland to Shanghai, I had a layover of a couple of hours at Shanghai (PVG) airport. The entire transfer actually went very smoothly. I had to clear immigration, then pick up my suitcase and check in again for my next 2 flights.

I kind of lost my bearing when I got to the arrivals hall of the airport. Most of the signs are in Chinese, of course what do you expect? Luckily there is plenty of airport staff walking around, eager to help you out. The ones I got in touch with spoke relatively good English.

When you are at the immigration transfer desk, make sure you have everything on paper! Don’t bother with any electronic boarding passes because they will not accept those. I was glad that a friend told me about this so I had every possible ticket and hotel reservation printed.

Once I was through all the security checks I had to wait till the Asiana check in desk opened. The only thing for me to do was to sit down on a bench. Or I could head outside to have a smoke. While outside, I got asked so many times if I wanted to buy a fake iPhone, I lost count in the end.

As I was waiting in the departure hall I noticed a shiny red supercar in the corner of the terminal. It was the brand new McLaren 750S, what a beautiful car!

The check in for the Asiana flights was very smooth and easy. There were only a couple of Japanese businessmen in front of me so I didn’t have to wait long. My suitcase was labelled and I received my 2 new boarding passes:

The only good thing about this lounge was that it was located close to my departure gate. Besides some yoghurt, there was no food available at the lounge. Unless you went to the upstairs dining room, where you could order food but you had to pay for it. They served some red wine and cocktails in the lounge, but those didn’t taste very good. So I picked a soft drink to play it safe.

Oh and if you want to use the internet, please make sure you have a VPN application on your smartphone or laptop. Otherwise you won’t be able to access any websites. The Great Firewall of China lived up to its reputation as it blocked all kinds of social media, even Whatsapp was blocked.

Fortunately time went by quickly and 5 minutes before boarding I went down to the gate. It was now just a matter of minutes before I set foot on the B777-200 to fly from Shanghai to Seoul in Asiana business class.

All the passengers queued up in a good way and I was onboard in no time. I was welcomed and greeted by my last name and the stewardess brought me to my seat.

From my seat I could look out over the adjacent gates which were pretty abandoned at this time of the day.

The seat was comfortable, but everything looked a bit outdated on this plane. I was in seat 2K on flight OZ362.

Before take off, the purser came around to introduce himself: “Hello, my name is Jerry…”. I had to compose myself and try not to laugh because I almost replied to him that my name was Tom! Don’t get me wrong, the crew were very friendly and helpful, but it all came across a bit artificial. All members of the crew have an English name, while you know for sure that it ain’t their real name.

They would only serve water or orange juice before departure, so I picked the vitamins. The doors were closed right on schedule and the crew started the safety demonstration. Before I knew it we were up in the air heading towards Seoul.

The crew handed out the menus and newspapers, just before they started the first drink service. I was completely unaware of what time of the day it was, but I was in the mood for a gin & tonic. So within a couple of minutes I was served an ice cold G+T accompanied by some nuts. Not warm nuts, but packed in a bag.

After a short read through the newspaper to catch up with what was happening in the world, I had a look at the menu and enjoyed the view. The weather was great and I could look out for miles in the distance.

The menu was fairly simple, not a lot of choice but it would be sufficient for the short flight.

I went for the steak like on most of my previous flights. It turned out to be a good choice.

I skipped dessert, instead I decided to have a couple more gin & tonics!

While I was watching a movie, I noticed a sticker in the corner of my eye. On the lower panel near the floor there was red sticker which said “security check”. I wonder what they were looking for and I wasn’t sure if it made me feel more secure seeing this.

After arriving in Seoul I immediately went to look for the Asiana lounge. My connecting flight would also be in Asiana business class, so my boarding pass entitled me to visit the lounge. During my walk through the huge airport terminal of Seoul I heard some traditional music.

There were 2 ladies dressed in traditional Korean clothing who were playing music. They drew quite a crowd and I couldn’t resist taking a couple of pictures.

There was a huge scale model of the Airbus A380 at the entrance of the Asiana lounge. A mighty plane on which I have flown once so far. This was during my flight from Paris to Doha onboard Qatar Airways in first class at the start of my trip.

As if I didn’t have enough to drink on the flight before, I was getting thirsty! I made my way to the bar and poured myself a proper glass of Jack Daniels.

I spend a bit of time in the lounge when I suddenly realised that I didn’t have my boarding pass yet for my flight from Jakarta to Abu Dhabi. Now I know from experience that this causes issues at the airport security check in Jakarta. If you can’t show them your boarding pass, they will hassle you and give you a hard time before letting you into the check in area. I went down to the business center, logged into my Etihad account and printed the required boarding pass.

I wasn’t paying attention to the speaker announcements in the airport, so I first went to the wrong gate. My flight would leave from gate 50 so I had to relocate myself.

The second flight from Seoul to Jakarta would be on an Airbus A330-300. As this was only the second time that I had flown on Asiana Airlines, it would give me the chance to compare the plane and onboard service to my previous flight on the B777-200.

Just like on the previous flight I was seated in seat 2K. The only difference being that this airplane had a different seat configuration. This time I would have a seat mate next to me. He was a friendly man, an American with Korean roots who resided in California. We talked for a while before the stewardess came to us and told us that there would only be 6 passengers in business class. She offered my neighbour the window seat in front of me, which he took after we finished our conversation.

As soon as he had moved seats, I used his seat for storage. Not that there wasn’t enough storage space in the seat in front of me, but it was just easier. This way I didn’t have to bend over every time I had to get something.

Before take off I was able to glance out the window and do some plane spotting. As we were in Seoul, there was an overload of Korean Air planes passing by.

On this flight they did serve alcoholic pre departure drinks and of course I could not resist a glass of champagne. The crew was as friendly as on the previous flights, but again it all felt a little artificial.

As for the meal, I decided to eat something small and light. I didn’t want to have a stuffed stomach, so I went for the chicken sandwich. Afterwards I tried to get some sleep.

Well sleep would only come after I had another drink. A couple of gin & tonics later and I was ready to pass out and dream about travel…

Unfortunately I wasn’t able to get a proper sleep so I decided to have a look at what the In Flight Entertainment (IFE) had to offer. The only downside of flying a lot is that you will have watched almost all available movies.

So in the end I decided to listen to some music while I stared at the world map on the display.

Eventually land started showing and I knew we were getting closer to Jakarta.

Before landing the crew thanked all passengers for their loyalty and flying with Asiana Airlines. Travelling wears you down they say, well in my case it started to show in the shape of bags under my eyes…