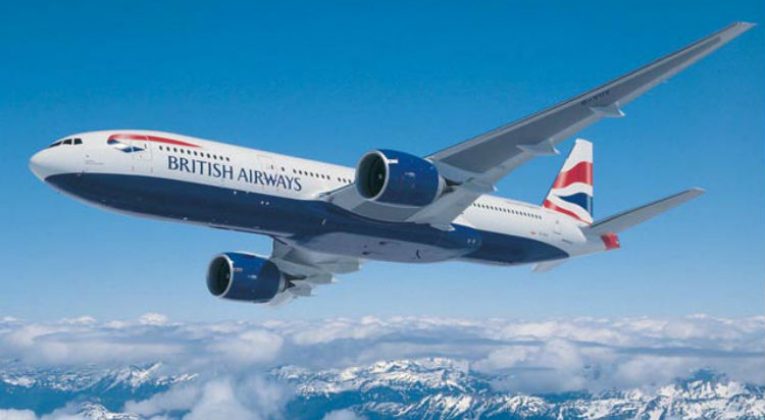 First… how did I secure this flight?

The flight was paid for with Avios, and as we booked during the April “off-peak” period, the total cost for the pair of us was 408,000 plus around £1050 in “taxes, fees and surcharges”.

Unfortunately, having used it already this year, I was not able to use the British Airways American Express “Companion Voucher”, which would have enabled me to get the second redemption ticket without spending any Avios, bringing the total cost to just 204,000 Avios plus the additional fees.

We arrived at Heathrow’s Terminal 5 at approximately 8am for our 11:40am flight to Haneda Airport, Tokyo in April. We checked in and deposited our luggage at the designated First Class desk, which was very quiet, so there was no wait.  After a very quick passage (approximately two minutes) through security via the priority lane at the southern end of the terminal, we made a beeline for the Concorde Room for a little respite before the flight. 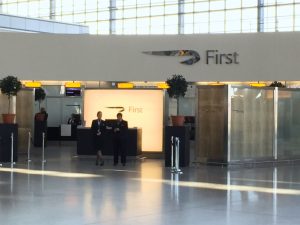 The flight departed from Zone B, which required a short journey via the free transit train from Zone A to Zone B.  We had a little shock as the BA team at the gate had boarded the plane early and there were no other passengers there aside from a gentleman in front of us (we had not heard any announcements in the terminal regarding this). 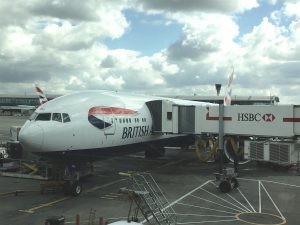 Boarding was therefore very quick and a member of the cabin crew was soon escorting us to our seats. 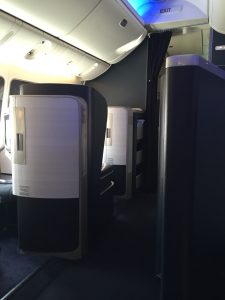 We were offered a choice of champagne, orange juice or water as a pre-take off drink – I opted for the champagne (and some water). 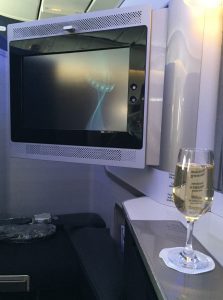 The flight was operated on a Boeing 777 aircraft and I sat in seat 2E.  The cabin was clean and we had blankets and headphones and were offered sleeper suits, slippers and an amenity kit prior to take off. 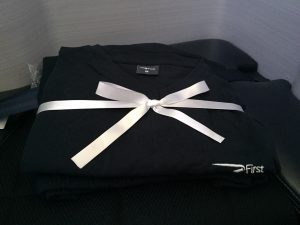 The staff in the First cabin (the Mixed Fleet crew, should you be interested) were all very friendly and offered all assistance required.  However, I was a little disappointed that the attention to detail from some of the cabin crew in the First cabin was a little lacking compared to previous experience in First on British Airways – the crew member looking after my partner was brilliant, however the member looking after me, whilst very polite and friendly, was not so attentive.  I did not receive a hand towel after take off (whereas my partner received one); I suspect this was because I visited the toilets soon after the seat belt sign had been switched off; however, in the past, cabin crew have noted if I was missing when they have been serving the towels, and served the towel to me upon returning to my seat – it’s a small point (and not one I would make if I was travelling in another class), but as the crew member didn’t think to do this I found it a tad disappointing.

The toilets were not properly stocked with amenities initially – there was soap, but no moisturiser – and the running water was switched off. I wasn’t overly impressed as these were issues that could have been identified and addressed prior to any passengers boarding the plane, not once the plane was in the air, and not after a passenger (me) had used the facilities to discover the lack of water to clean with afterwards!  I alerted a cabin crew member about the water not working, who I felt thought I was being stupid, as he was a little disbelieving initially, albeit politely – he sorted the problem immediately, and did apologise. 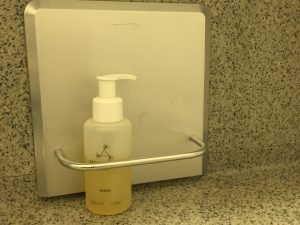 The entertainment system was the newer system, with touch screens.  The choice of films on offer was impressive – there were a lot of films on offer that had only recently (within the last six months) been in the cinemas – so there was plenty to watch. 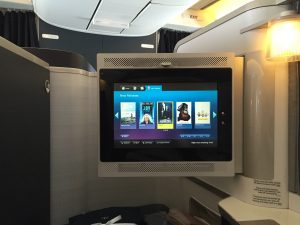 The menu had appropriately taken on a Japanese flair.  Dinner and breakfast, as well as Bistro options and a bar, wine and champagne selection, were offered. 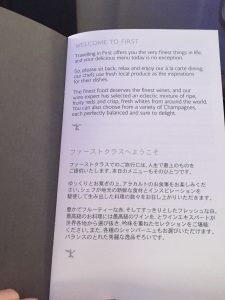 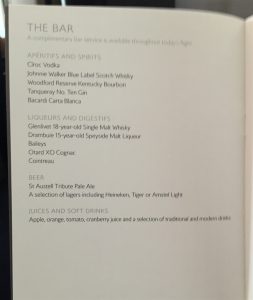 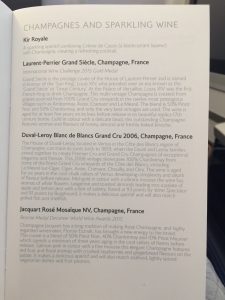 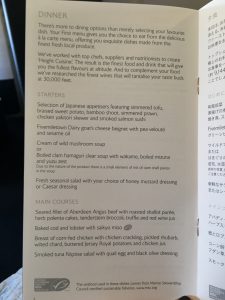 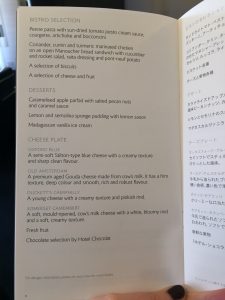 For dinner we made use of the buddy seat and had our silver service meal together – we’ve not done this before (as we often get overnight flights), but it was really nice to do and I would recommend using it for dinner if you are travelling with someone else. 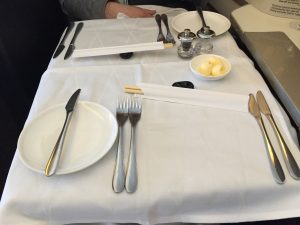 We were served an aperitif, which was delicious – it was something like ricotta cheese in a wrap with tomato and onion on the side glazed with a dressing – I can’t quite remember the details of it (as it was not on the menu). 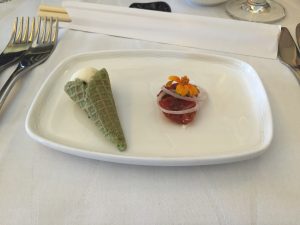 I opted for a selection of Japanese appetisers, which was nice, but not as good as I was expecting – the vegetables were extremely crunchy, al dente to the extreme(!), which wasn’t really to my liking. 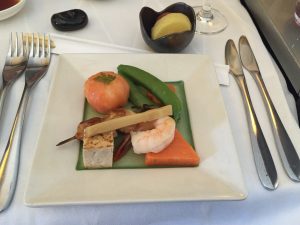 For the main course I had the Aberdeen Angus beef, which I did like – often beef can seem a little dry on planes, but this was not dry at all. 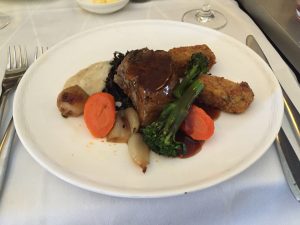 I then selected the caramelised apple parfait for dessert, which was equally very nice. 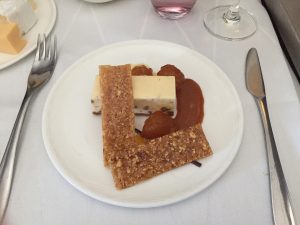 I also had a cheeky cheese course too – the Camembert was the best, I thought, but the Duckett’s Caerphilly cheese was a close second. 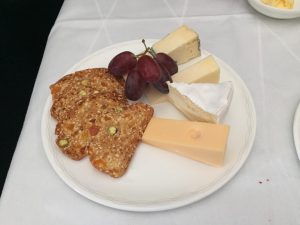 I opted for Sancerre to go with lunch (I am not a red wine drinker, even if it results in a culinary faux pas…).  It was a really good Sancerre, so a few glasses were had. 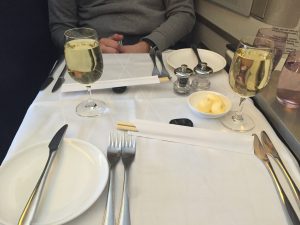 After dinner I opted to have the bed made up.  Although I didn’t sleep for long, I did change into the sleeping suit offered, mainly to prevent my clothes getting all creased. 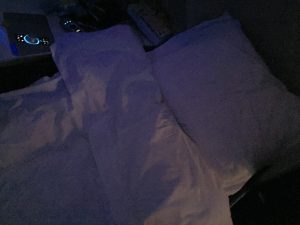 Unfortunately, nothing was offered in between the dinner and breakfast – you could ask for whatever you wanted, which I did several times and the crew member was very helpful.  However, no one came round offering any snacks or water, which, for a flight that was over ten hours in duration I found a little odd.  As I was essentially in daytime mode, I was wide-awake for all bar one hour of the flight (and was only dozing for the time that I was not fully awake), so was aware of this. 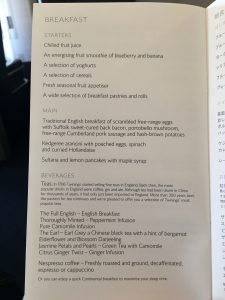 For breakfast, I opted for the full English – I was very disappointed with this – bar the bacon, it tasted very synthetic and not very fresh, to the extent that I left most of it.  I did go for the smoothie as well though, and that was very refreshing. 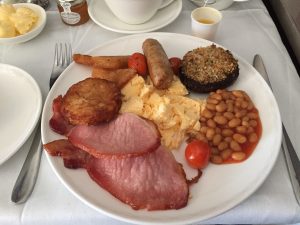 We landed fairly smoothly in Haneda and had a fairly short taxi to the gate.  We got off through a separate door and walkway for first class passengers only, which made for a quick exit.  It was a bit of a walk – approximately six minutes to customs.  Transit through customs was painless and quick and the transfer of our bags to the collection point was quick – we waited less than five minutes for our bags to arrive once we were at the baggage belt.

There is no arrivals lounge at Haneda for British Airways customers at present, which is a little annoying as the flight arrives very early in the morning – we landed just before 7:50am, and had no means of freshening up at the airport, meaning we had a potentially long wait ahead of us to do so before we could get into our hotel room (fortunately when we got to our hotel, by 9:30am, we were allowed to check in and go to our room, but this was not a guarantee).

The flight was very comfortable, with a good entertainment selection and very good food offerings and wine/champagne options too; I also cannot stress how friendly the cabin crew were.  If I were travelling in Economy I definitely would not complain about the few fairly minor things that could be improved upon, however I did feel a few things let the First service down on the flight and a bit more attention to detail would have been appreciated – I have had much better experience of on other flights in First with British Airways, especially on our flight back from Tokyo.  The other thing to mention is I would have personally preferred a later departure from Heathrow (and thus a later arrival in Haneda) as we did land extremely early.

All in all, bar a few minor issues, it was an enjoyable flight – the small issues I have mentioned have been fed back to British Airways (but I was also keen to note the good things too).

Fancy BA First Class? Our Top 10 Insider Travel Tips will show you how to earn easy Avios and redeem them with a two-for-one ticket! Don’t forget too, that BA currently has a sale on, which includes discounted First Class tickets.

Born with the wanderlust gene, travelling the world and exploring new places is what I live for in my spare time. I have spent years working out ways to fly as much as possible (and flying nicely too) without breaking the bank. As a less frequent flyer, sticking to one rewards program made more sense, so I am constantly earning, learning and now sharing ways on maximising Avios points to get me, and others alike, to new destinations