Dubiously-named Icelandic budget carrier WOW Air has made a few headlines with its periodic £99 (and sometimes even $99) fare between the UK and United States.

The £99 flight is now back, and offers a potentially good value trip to the US. The London-Boston flights are probably the stand-out offering, with returns currently available at a very reasonable £249.

Other destinations include Washington (BWI) at £99 and San Francisco at £139 one way. Expect to pay more for your return trip, though.

The £99 Boston flights are available on various days in February, March and April. The cheapest return legs we could find were then £119, and here’s an April itinerary example using the £99 + £119 flights:

If we compare that to a BA flight for similar dates, it looks pretty good at first glance:

But before you rush to book, it’s always worth remembering a few key points:

For me, the value here is almost entirely in factoring in an Iceland stopover. Iceland is genuinely a-m-a-z-i-n-g.

Given the budget nature of WOW, the extra cost of baggage and the hassle of flying via Iceland, you need to take the £99 fare with a pinch of salt.

However, if you fancy a stopover in Iceland, then it’s a potentially fantastic way to build in two destinations to your trip. Personally, I think that £281 (plus baggage costs, of course) for a trip that includes Boston and Iceland is excellent value. As such, if you can make this work, I would go for it.

Booking the stopover flight is easy – on the main booking flight screen, just select the box that says “Stopover”, and plug in your requirements there: 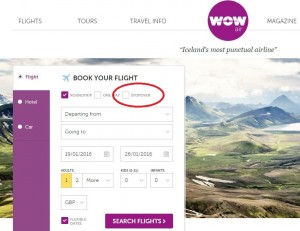