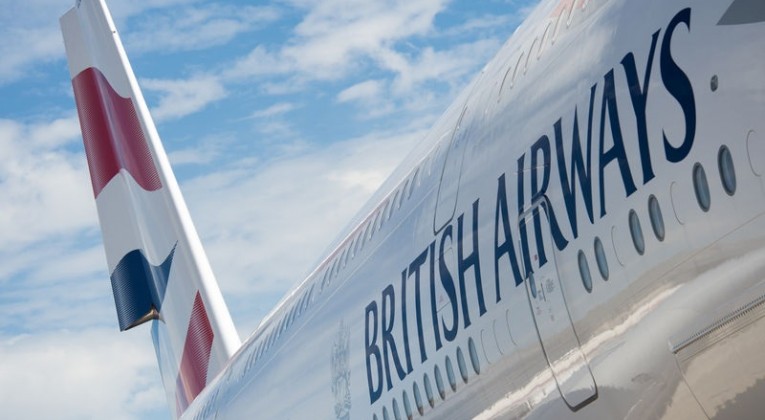 The A380 is a huge beast – there is no denying that. Two levels and seating over 380 passengers, it really does bring a new scale to flying. 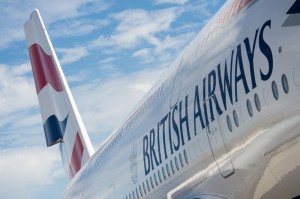 My latest journey was extra special and I will be honest I was excited. My first First Class trip on the A380!

I had purchased a sale ticket from Dublin via London and Miami to Tampa. This involved the segment on the A380 from London to Miami, which had been switched to Terminal 3 a few days before I travelled. This means, of course, no Concorde Room as it doesn’t exist in T3. In addition I had to take the horrid T5 to T3 transfer at Heathrow. 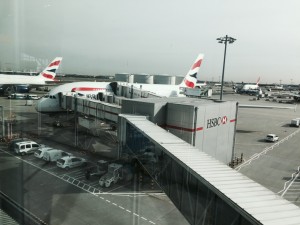 The inbound flights from Dublin normally come in at Gate A23 in the main terminal at Terminal 5. This allows passengers to avoid UK Immigration if they are ending their journey at Heathrow. Connecting passengers have to be able to prove that they have a connection – in my experience the Heathrow Airport staff will only accept an onward boarding pass as proof.

After a ten minute walk you are required to go down an escalator and hop on a bus. This winds around T5, stopping at the B gates if needed and then on to Terminal 5. Up two escalators and you come out on the Arrivals level of T3. Another ten minute walk and you’re down two more escalators, along a corridor and arrive at the Terminal 3 transfer centre.

On the day I travelled the queues were huge but there was a Fast Track line – despite this it still took 15 minutes to get through Security.

Airline desks are immediately behind Security and you emerge near the entrance to the American and Virgin lounges.

I had tried to book a Spa Treatment a couple of weeks before my flight but none were available. It’s a very small treatment area in the T3 lounges so it is easy to understand that availability is poor.

My flight was already showing an hour late when I arrived in the lounge. There were no BA staff to discuss rebooking as the service desk was closed. A call to the Gold Guest List centre did not encourage them to rebook me either. I went to the American Lounge in the hope that they would be able to hold me a seat on the next days flight as I was likely to disconnect. They declined.

The lounge is self-service and pretty much offers the same as the First lounge at Terminal 5 – a combination of cold items and school-dinners type hot food.

The pasta was pretty good but the rest was fairly average. The First Class Dining Room was not operational and people were using it freely to eat their food. I found a corner and set myself up until it was time to board.

With the day I was having – there had been long delays out of Dublin and the ground staff there had been rude and unhelpful – I knew it would be the furthest gate from the lounge, and so it was. A good 15-20 minute walk.

Just as I arrived, the staff decided to board First Class and I was pretty much the first one on. The first door led me to the entrance of the plane where I was greeted and shown to my seat, 2K

The First Class cabin is downstairs at the front. Many airlines have put their First Class upstairs but downstairs works fine. The BA seat on the A380 is larger than on the 747 or 777’s.

There are bins over each row which marks an improvement from the 747, but they are smaller than the 777 bins. A jacket holder is built in the wall of each seat enabling you to store clothes easily if you choose to wear the sleeper suit.

The seat was angled in to the window:

Each seat had two windows whose electronic shades go up and down at the touch of a button on the side of the console.

The seat, lighting and window shades are controlled from this panel.

The crew came around quickly with sleeper suits, wash kits and newspapers. Champagne appeared next although it was a little too warm for me.

There is a large storage area in the arm of the seat which also holds the controller for the video.

The screen was large and the movies were available during boarding. The new BA headset was provided which seemed very similar to the old one, but with a slight redesign.

Boarding continued and all the First Class seats were full by the time the doors were closed.

About 30 minutes after we should have left the pilot apologised for the delay and advised that we would be pushing back soon. An hour after we should have left he came on the PA and explained that whilst we were now ready to leave there was an air traffic delay which would not see us pushing back for about a further 30 minutes. That turned in to an hour, making us three hours late in total. There were problems retracting the Upper Deck jetbridge which took nearly an hour to solve.

BA made a lot of the delay being the fault of a delay to the inbound aircraft. In fact it seems that T3 simply cannot turn an A380 fast enough. The service to Miami had been running late for most of the week before an A380 went tech in San Francisco and had to be subbed by a 747. Fixed, the A380 came back to London after two days and operated the previous days Miami on time on both segments. All around, the excuses were not very believable.

Of course, I had 9 hours to see if BA managed to get me there in time to make the last flight to Tampa of the day. They didn’t.

No WiFi on board meant that no one knew what was happening until we landed in Miami.

The crew were pretty attentive, bring round one of the signature cocktails during the long ground delay – couple with water and a couple of glasses of champagne and I was pretty relaxed watching movies.

Lunch arrived pretty quickly after take off – I selected the beef from the menu below:

The tasting menu, only available on the A380 included fish so I passed.

The food was pretty nice in truth for airline food.

I wanted to have a nap after eating – it had been a long day already and the delays had just added to the general frustrations. However, this proved a lot more problematic that I had expected.

One of the great things about the A380 is that it is very quiet – noticeably much quieter than the 747 or 777 aircraft that BA have. However, because of the way that the seats are designed, if you sleep, and someone is occupying the partner seat in the row behind you can hear all the conversation. This was the case with my flight and whilst clearly the passenger in 3K was booked in First his friend was not and they spent a good time over their meals and their Johnnie Walker Blues. Even with ear plugs in their noise kept me from sleeping. I did eventually fall off to sleep with the seat mate returned to his cabin.

The windows provided good views of the clouds as we passed over the Atlantic:

We lost ten minutes whilst they tried to connect the jet bridge, finally deciding to do this at Door 2 rather than at Door 1. Apparently there is some rule about the upstairs jet bridge being connected before the downstairs one.

Arrival in to Miami was just at a point where I might have managed to secure the connecting flight if several things worked for me – there were golf carts at the plane, American would hold the connection 10 minutes and there was no line at US Immigration or Customs. Some of these things went well – actually only one – there was no line at Immigration, thanks to Global Entry.

At the top of the escalator was a lady with a large number of envelopes sellotaped to the glass wall based on destination. Each destination had an envelope per passenger – you grabbed your and then looked inside and then ran.

However, there were no carts at the gate to whisk us to Immigration, the Customs line for GE had closed and there was a wait at the ordinary line and the transfer TSA security point outside Customs had closed for the night.

Mine contained a voucher for the Miami Airport Hotel – the hotel right in the airport itself (near Terminal E), a boarding pass for the 10am flight to Tampa and a couple of meal vouchers dated for the day of arrival.

Being out quickly and hoping that the gate would be close by I ran to the TSA checkpoint 1 – furthest from arrivals of course. A minute through and I was airside just as the plane was supposed to leave for Tampa. Whilst on the way from London the gate had changed from one opposite this checkpoint to D1 – a long way away. As I looked at the board, it changed to ‘Departed 2145’ and I knew I was in for a night at MIA.