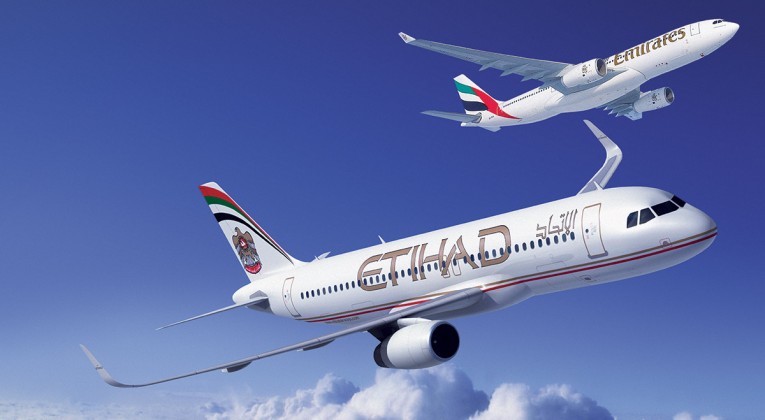 I recently flew long-haul business class from Europe to Asia and Australia, travelling out with Emirates, and back with Etihad. This gave me a great opportunity to compare two of the world’s best-regarded premium cabins. 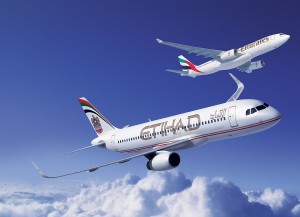 What surprised me most of all was the fact that Etihad absolutely wiped the floor with Emirates. I should warn you that any issues I raise from here on in are about as “First World Problem” as you can get (“my caviar was slightly too salty”…), but forgive me – it is a premium cabin comparison.

The trip out in Emirates business class

My trip East (Manila via Dubai, with a stopover in Cyprus) was with Emirates. The Dubai flight was 7 hours and 15 minutes, and the business class cabin was poor by Emirates’ standards. It was an Airbus A330-200, with the old-style business class, so dated seats that recline rather than going fully flat. There was also very little division between you and the neighbouring seat, other than a slightly extended armrest. On a long haul business class flight with an airline of Emirate’s pedigree, this was a disappointment. The in-flight food was acceptable without being exceptional. A key difference between Emirates and Etihad (see below) is your ability to order your food at will with Etihad (i.e. whatever meal is on offer, and there are a range of choices, can be had whenever you want it, not when it’s served). Impressively, this is also supplemented by a permanently available selection of hot and cold snacks. Emirates sticks to a more limited and rigidly-timed format (you eat when they’re ready, not when you are).

The in-flight entertainment in the older Emirates cabin was also mediocre. The selection was very good, but the screen was tiny and quite difficult to watch in the glare of the cabin lights (which stayed on for the duration of the flight).

Unlike all the other flights, no amenity kits were provided, which surprised me.

In fairness, the business class cabin from Dubai to Manila (8 hours) was substantially improved in the Boeing 777-300. It had new, fully reclining seats, much larger TV screens and a healthy division between seats. That said, unlike Etihad, the window seats had another seat next to them, which limits space and privacy somewhat, although there is a button that brings up a screen between you and your neighbour (should feeble attempts at polite conversation not be your thing). In fact, in terms of the cabin itself, there wasn’t a great deal to distinguish between the Emirates and Etihad Boeing 777 business classes,  although I would say that the Etihad product is superior (and the Etihad business class in the Airbus 330 is frankly to be avoided). Principally, however, it was the in-flight service and the lounges that made Etihad the runaway winner.

The Emirates business class lounge in Dubai is huge. While there was a good spread of food and drink, the sheer size and number of people in it made it feel rather more like a well-appointed staff canteen than a premium lounge. I do appreciate that Emirates needs to cater for business travellers on a fairly industrial scale in Dubai, but there’s little doubt that this very much leads to a loss of the “premium feel” that these lounges should provide. As a result, there was very little attention from staff, and there did not seem to be any a la carte dining options, it was all down to the buffet.

Notably, and in stark contrast to Emirates, Etihad managed to strike a near perfect balance between catering for the (relative) masses, while maintaining an air of luxury to their business lounge in Abu Dhabi.

The trip back in Etihad business class

Returning, the Etihad experience was absolutely fantastic (Sydney to Abu Dhabi, and then on to London). You are lavished with attention (and food… and drink…) when you fly business class with Etihad. The Etihad Boeing 777 business class seats are excellent: your own little private pod, with an array of extras including a massage function (also on Emirates 777s), a well-sized TV screen and a range of TV and audio options. There is, of course, a fully reclining seat.

Putting the Etihad lounge superiority to one side (see below), there were  two real stand-out elements to the Etihad 777 business class service cabin versus Emirates. The first was the individual seats next to the window, which were fantastic. Your nearest neighbour is an aisle away, giving you real privacy and comfort.

Second, the in-flight service is of the very highest quality. As noted above, the meals are served off a menu, and while your order is taken early, it’s then up to you when you actually want to have the food delivered. On a 14 hour overnight flight, this is great: gone are the concerns with eating the wrong meal at the wrong time, or waking up halfway through a sleep for a three-course meal – it’s all in your hands.

Beyond that, a limited a la carte menu provides constant access to a range of hot and cold snacks.

I can categorically say that Etihad long-haul business class exceeded all expectations.

Etihad’s impressive hospitality is well reflected in its lounges. I began in the well-appointed if modestly sized lounge at Sydney airport, with a three course meal. While the portions were small, the food was great. The Etihad business class lounge in Abu Dhabi is on the same scale as the Emirates lounge in Abu Dhabi, but remains absolutely fantastic. Given its size, it could easily suffer from the same issues as Emirates’ Dubai offering. However, it manages to maintain a premium feel despite its expanse. This is helped in part by the a la carte dining, and free-to-use spa (where I had a 15 minute head and shoulders massage: much needed after a 14 hour flight).

My only criticism, and it’s a fairly fundamental one, is the comically limited bathroom facilities. I won’t go into too much detail here, but suffice to say, be prepared to queue. At peak times, showers will be particularly hard to come by, and this is something that does need to be addressed.

And the winner is…

Well, you may just about have picked up from the title and tone of this post that Etihad provided a substantially more impressive business class service. In fairness, the Emirates flight from Dubai to Manila was perfectly acceptable, without going above and beyond what one might expect from business class. The first flight, however, was poor.

Etihad’s supremacy is down to a consistently high quality business class cabin, superb premium lounges, and the kind of in-flight attention that goes some way to justifying the cost of business class travel. I very much look forward to flying with them again.

If I am ever faced with the option of similarly priced and similarly convenient business class flights with Etihad or Emirates again, there’s no doubt that I would make the whole journey with Etihad.

This is how business travel at its best should be – expectations exceeded in every way.

This is a wholly independent review, and no financial or other incentive was provided by either airline featured. The views contained herein are personal to the author.

Some of the pictures in this article are stock photos, but in all cases represent the product being described.

UK-based Tom Sumner is our main editor, and a veteran of the travel and miles and points world. Tom loves a hotel or flight bargain, and his armoury of tricks and tips - and desire to share them with others - has led to him blogging extensively on the subject.