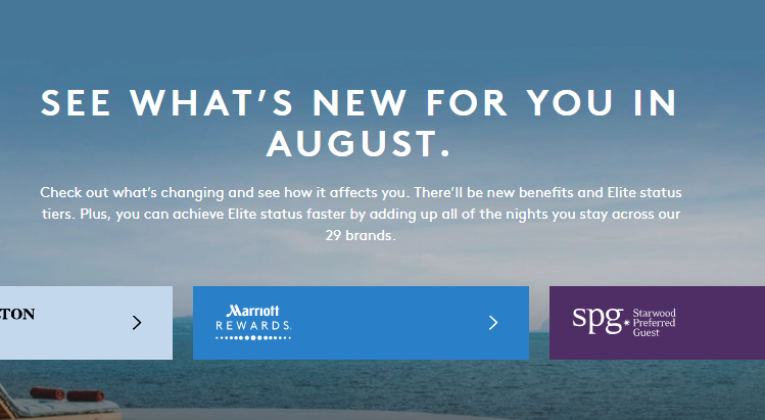 On 18 August, 2018, the new Marriott loyalty programme was launched… sort of… not completely…  The litany of IT meltdowns and outstanding issues is simply too great for me to summarise.

But the merger process seems to have been designed to do the following… All Starwood Preferred Guest accounts would be “converted” into brand new, stand-alone Marriott Rewards accounts. SPG members would receive a new membership number and their balance of Starpoints would be tripled to reflect their value as Marriott points. Hopefully this process has worked for you, and you still have the correct number of points, your reservations still exist, etc.  (As a matter of pure luck, my SPG account happened to use a different email address to my Marriott account, so I’ve avoided all of the cookie conflicts, password not recognised, and other similar errors that resulted from people not knowing their new account number and trying to log in using an email address.)

So, Why Would You Merge Accounts Then?

Well… some people are sheep… and many people received a pop-up prompt when logging into their Marriott accounts.

Others have put a little more thought into it. By merging the two accounts, you might become entitled to a much higher level of elite status. For example, if you have stayed 22 nights so far this year with Starwood Preferred Guest, and also managed 30 nights so far with Marriott Rewards, you could currently have no elite status of note. But by adding those 22+30, you’d end up as 52 nights for the year and would qualify for Platinum status, the benefits of which I outlined in this post that you can find by clicking here.

You might also have a substantial number of points in each separate account, and want to combine them into one. (linking accounts, and transferring points back and forth no longer works) This isn’t my situation, since I anticipated an SPG meltdown and moved my entire balance to Marriott Rewards in July. But some people might not have done this, and now require the points for a redemption opportunity.

Why Am I Going to Take as Long as Possible Before Merging? (and You Might Want to Too…)

Marriott promised that SPG members would be able to qualify (or re-qualify) for Platinum status in 2019 by completing 25 stays during 2018. These stays would need to take place at legacy SPG brand hotels only. Merged accounts don’t appear to be tracking such detail, especially if you choose your Marriott account as the surviving account. This might be happening behind the scenes, but I see no reason to risk it. I would keep my SPG account separate and independent until the legacy criteria are reached…

You can also qualify for the old Marriott Gold status (now Platinum status) by staying 50 nights at legacy Marriott properties. This ought to make little difference, since you would also need 50 combined nights for Platinum status in the new Marriott programme. However, if you have an eye on lifetime status (as I do), you might be interested in the total number of Platinum years. During 2018 it should be possible to achieve 2 Platinum years, by qualifying for status independently – i.e. 25 SPG stays in one account and 50 Marriott nights in the other.  So, until I hit that fiftieth Marriott night, I’m not merging anything!

If you attempt to use a Marriott Rewards account to book an award stay at an SPG hotel, you should be redirected to the SPG website. Eventually you will reach a dead end. SPG won’t recognise your Marriott Rewards number. In theory, you can call Marriott for help, but I have better things to do than wait on hold for an hour or two.

If you happen to have some points in your old SPG account (now set up with a new number as I mentioned above), you should hopefully be able to book SPG brand award stays as usual.

3. I Might Just Get an Extra Annual Benefit… Shhhh…

But my stand-alone Marriott Rewards account is also imminently going to reach 50 nights. This should theoretically entitle that account to my choice of:

five Suite Night Awards™, give the gift of Silver Elite status, 40% off your favorite mattress, five Elite Night Credits or a $100 charity donation

Five suite night awards sounds appealing to me. But then, once I cross the threshold of 75 nights (whether on a stand-alone basis or by finally merging my two accounts), I should receive my choice of:

Another free night, or an additional 5 nights in a suite. And what if I did 75 nights in my SPG account instead of my Marriott account – would that account also qualify for another free night? I admit that this is all speculative travel hacking and it could all end in tears. But… decisions, decisions…

This probably should be number one. Several times in the past fortnight I’ve thought about writing a post about the IT meltdowns that are being reported on Flyertalk. But each time I started to research, I became overwhelmed by the sheer breadth of different issues being reported.

If your legacy accounts are working fine, then just leave them alone! Why tempt fate, at least until the IT situation is under control. I remember upgrading a laptop to Windows 8, then spending months bitterly regretting that decision, at least until Windows 8.1 came along. Never again!

Have you merged your Marriott and SPG accounts? Any horror stories to share, or did it go reasonably well?  Or are you waiting, like me, until Marriott gives us no option but to merge accounts.