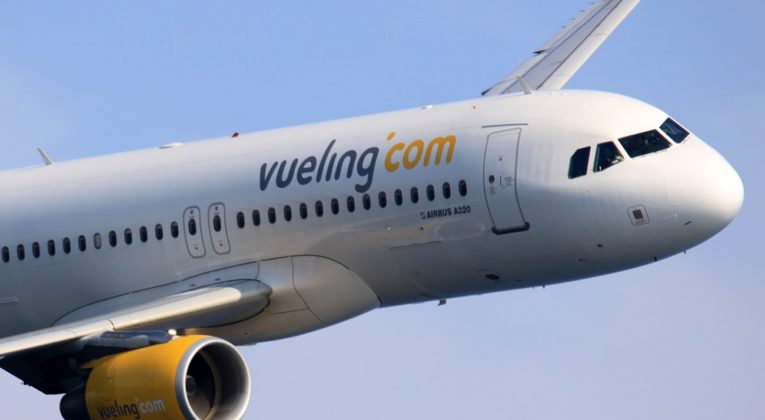 Vueling is a curious hybrid. Its origins are as a Barcelona-based low cost carrier but several years ago it merged with Clickair, an entity that Iberia had set up as a low cost subsidiary. This left Iberia – and subsequently International Airlines Group after the British Airways merger – with a substantial stake in Vueling. Finally in 2013, IAG decided to fully take over Vueling. Prior to the full takeover of Vueling, Iberia had strategically decided to abandon Barcelona, except for Puente Aereo / Air Bridge flights between Madrid and Barcelona which connect to the Iberia route network in Madrid. However, the two companies agreed to offer most Vueling flights as Iberia codeshares. (for those unfamiliar, codeshare means that a flight is sold with an Iberia flight code – i.e. IB5555 – even though the flight is operated by Vueling)

This leads to some confusion. Despite being fully owned by full Oneworld members British Airways and Iberia, Vueling is NOT a member of the Oneworld alliance. Therefore, no Oneworld benefits will apply, even on Vueling flights booked with an Iberia (or BA) flight code. So, American Airlines AAdvantage, Cathay Pacific Marco Polo etc. members with elite status will NOT earn miles or receive lounge access, excess baggage, free seat selection, fast track security, etc. when flying on Vueling.

Iberia Plus members can earn Elite Points when flying on Vueling. Most of the fares you’re likely to pay on Vueling will earn you 15 or 25 Elite Points.

Iberia Plus members with Gold or Platinum status receive lounge access when flying Vueling as an IB codeshare. However, this benefit is only available at the following European airports: Alicante, Amsterdam, Barcelona, Berlin, Bologna, Brussels, Cardiff, Stockholm, Gothenburg, Hamburg, Lisbon, London Gatwick, Madrid, Malaga, Milan (Malpensa), Paris (Orly), Palma de Mallorca and Rome (Fiumicino). (At least those are the airports that Vueling publishes as offering lounge access to its Excellence customers, so YMMV…)

Iberia Plus elites should also receive fast track through security. However, no additional luggage allowance applies.

One of the biggest complaints about BA codeshares operated by Vueling is that you probably won’t receive lounge access, even though BA are selling Vueling flights alongside their own. The formal rules on BA’s website state that elite members must travel on Oneworld airlines to enjoy lounge access. And as I mentioned at the start, Vueling is NOT a Oneworld member.

That said, the unofficial policy appears to be that a BAEC GOLD member can access BA-operated lounges when flying on Vueling. (i.e. those located in the UK and a few major airports in Europe) However BA won’t pay for third party lounge access. The Gold member is also not entitled to bring a guest.

In terms of baggage, standard Vueling rules apply (1 checked item for Optima fares). However, if the BA codeshare is booked in connection with a BA long haul flight – i.e. New York to London to Florence – then Vueling will honour the long haul baggage allowance, which will include the extra bags allowed for elite members.

Your BA status also won’t earn you the right to book extra-legroom emergency exit row seats for free. But the Optima fare – i.e. what BA codeshares equate to – does allow you to pre-select a seat closer to the front of the aircraft.

I understand that IAG wants its airlines to work as closely as possible. But I think it is a strategic blunder to be selling no-benefit, low cost carrier flights as if they were British Airways or Iberia flights, but then point to the fine print to deny anticipated benefits to their most loyal customers.

What do you think about Vueling? I try to avoid them these days, even though they are the most convenient airline out of Barcelona for me…