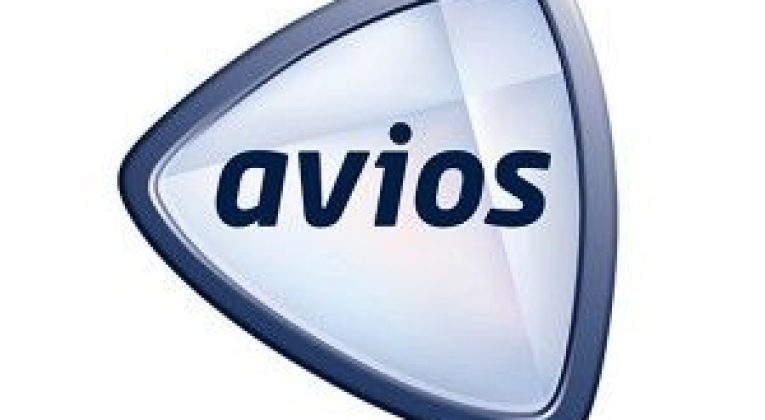 In 2011, British Airways Executive Club moved to a distance-based reward chart and started charging separately for each individual flight. Members connecting via London are amongst the most disadvantaged, since they must pay additional Avios for their connecting flights to/from Continental Europe. The subsequent 2015 devaluation involved adding peak and off-peak dates. I suspect that most of us have gotten used to this system and are pretty familiar with the Executive Club reward chart. 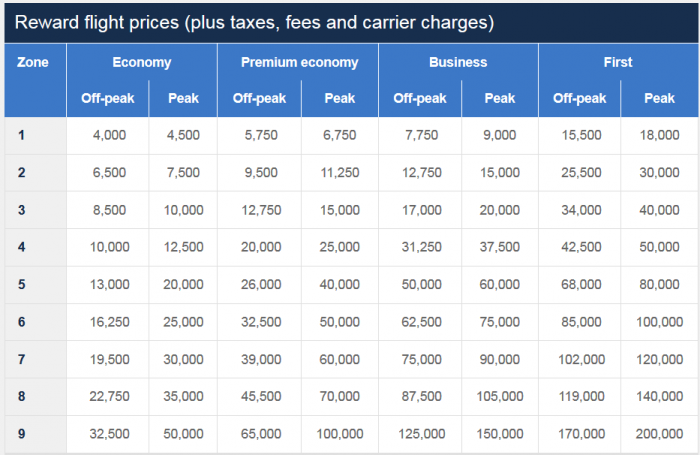 Since it takes some digging around on the British Airways website to find the actual distances allowed in each band, here’s a summary:

Under this segment-by-segment system, it’s logical to assume that direct flights always cost fewer Avios than itineraries with connecting flights.  Well… not quite…  A city pair that is 3,010 miles apart would cost 120,000 Avios return in business class on a peak date, while a city pair that is only 2,990 miles apart would only cost 75,000 Avios return in business class. Seems a bit unfair, doesn’t it?  Particularly if the city you wish to visit falls just above the cut-off point. Most glaringly, TWO 2,999 mile flights would be cheaper (2 x 37,500 in peak date business) than ONE 5,501 mile flight (1 x 90,000 in peak date business), despite more total miles flown.

Now there is certainly the convenience factor to take into account, particularly if there is a direct flight from where you live to where you want to go. But if you’re forced to connect anyhow, really want to ration your use of those precious Avios or want to avoid BA’s surcharges, it may be worthwhile to look for city pairs that are just less than 3,000 miles apart – as that is the “sweet spot” for avoiding the big jump from Band 4 to Band 5.

Besides that, if your city pair comes out at just above the cut-off (for example London to Seoul is 5,520 miles or London to Kuala Lumpur is 6,593 miles), it’s also worth checking to see if there’s somewhere you can stop en route. Helsinki is certainly a great option for many northeast Asia destinations as you can easily save both Avios and money! Or, if you have lots of mileage headroom left in your reward band, then perhaps you can head slightly out of your way in search of a surcharge-free partner. Calculating flight distance is easy; there are several tools available – Great Circle Mapper for instance.

Unfortunately, quite often oceans and a lack of Oneworld partner coverage get in the way of such schemes, but here are a few ideas for you…

This is the most commonly-sited example of an Avios sweet spot – Aer Lingus flights from Dublin or Shannon to Boston. At 2,993 miles from Dublin to Boston, Band 4 pricing ought to apply. Unfortunately, however, the process of merging Aer Lingus into the Avios system means that somebody has decided to move Boston slightly further west. Here’s what I found on avios.com for an upcoming off-peak date. As you can see, Band 5 pricing now seems to apply… 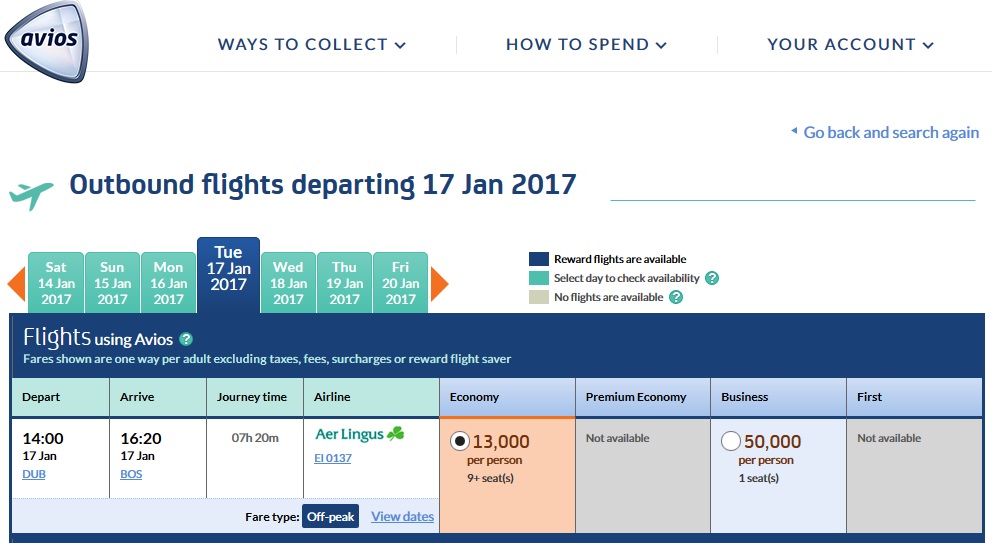 Although it might seem like entirely the wrong direction – flying towards Germany en route to North America – Air Berlin has no surcharges to be added to reward flights. And although you won’t save Avios, the good news is that most, if not all, of Air Berlin’s North American routes fall into the same reward band as BA’s equivalent. For example, Berlin to New York is 3,967 miles (versus 3,451 miles for LHR to JFK) whilst Dusseldorf to Miami is 4,733 miles (versus 4,425 miles for LHR to MIA). So you can easily avoid surcharges, all for the cost of a separate 8,000/9,000 Avios Reward Flight Saver to Germany.

Europe to Middle East (and beyond)

British Airways flights between London and Kuwait squeak into Band 4. Kuwait isn’t much of a leisure destination but you might be able to continue onwards with a low-cost carrier in the Gulf.

A better option is the Air Berlin flight from Berlin to Abu Dhabi. At 2,900 miles, this route also falls into Band 4 and again avoids the worst of the surcharges. You also can choose the Niki flight from Vienna to Abu Dhabi although this route usually operates in a short-haul configuration. If your final destination is actually Dubai, a taxi or Uber will get you from Abu Dhabi airport to your hotel in Dubai in 60-90 minutes.

Qatar Airways is another potential option. Although the distance between London to Doha is slightly greater than 3,000 miles, a short hop from the UK to the Continent – cities such as Frankfurt, Stockholm, Milan, Zurich, Copenhagen, etc. – will get you within 3,000 miles of Doha. You should have no problem finding Business Class award availability at 37,500 Avios each way in Business Class.

Want to get within 2,000 miles of Doha for a reward costing 20,000 Avios each way in Business Class? Try Sofia, Bulgaria or Athens. Obviously a much longer positioning flight, but potentially still worth it…

Your final destination is hopefully not Doha, however. And if you’re going to Southeast Asia you probably already know that Qatar often offer excellent Business Class paid fares from many of those same European cities I mention. But you’re less likely to find cheap Business Class fares to mouth-watering Band 4 (from Doha), yet hard-to-reach-from-the-UK destinations such as: Kilimanjaro (Tanzania), Kigali (Rwanda), Zanzibar, Goa, Kathmandu, Maldives, Seychelles and Yangon (Myanmar). 75,000 Avios each way in Business Class (+ the cost of positioning to the Continent) can be quite a bargain for these exotic destinations…

Miami and Lima are only 2,608 miles apart. LATAM also offers a flight from Orlando to Lima (2,795 miles) From Lima, you can get pretty much anywhere else in South America for less than 2,000 miles on LATAM. You shouldn’t pay any surcharges, making South America a great place to use Avios. (Don’t forget to fly home from Brazil to avoid those BA surcharges)

Los Angeles to Honolulu is another Band 4 city pair. Stopping off there before heading to Australia on Qantas can also save you Avios. Los Angeles to Sydney covers 7,488 miles (300,000 Avios return in Business Class!) whilst you’d pay just less than 200,000 Avios return to fly in a combination of American Airlines First Class to Hawaii and Qantas Business Class to Sydney.

When flying around the United States on American Airlines, I would normally look for 2,000+ mile flights in order to earn 210 Tier Points in First Class. But now that most AA domestic flights in AA’s First Class cabin will only earn Tier Points as per Business Class (40 or 140), perhaps the thought process flips. Instead of looking to pay for a 2,000+ mile flight, one might now look for flights covering slightly less than 2,000 miles, which will cost 20,000 Avios (+£5 in tax) in AA First Class but get you most of the way across the country. Good examples include: Phoenix to/from Washington D.C. or Miami, Atlanta to/from Los Angeles, Charlotte to/from Las Vegas, Chicago to/from Seattle, etc.

What appears to be inconvenient can sometimes be invaluable. Before you blindly book that BA reward flight, take a quick look to see whether you can break your itinerary into chunks and save both Avios and often money whilst enjoying a two-destination holiday!