A smartphone is almost as vital a tool for the savvy traveller now as a passport. Mine is loaded with apps and websites that I use all the time – mobile boarding passes, hotel bookings, loyalty info, restaurant reservations, transport options, photographs, social media – as well as texting and calling home.

In the past, this has always been an expensive option and there were always tabloid stories at the end of the summer of people facing huge bills for using their phones abroad and not understanding the charges.

Thankfully, those days are over and there is no need to worry, thanks to the Feel at Home programme from Three. I first began using them in 2007 so I could make calls on my mobile using Skype to Hong Kong and when in Hong Kong to call back to the UK, and I have been with them ever since.

The beauty of the plan is in its simplicity – there are no add-ons to buy or boxes to tick. Everyone on any of the pay monthly tariffs (except the Essential plan) can take advantage. In short, you can use your plan’s calls, text and data allowances as normal in the countries below:

It provides seamless connectivity in any of the countries and it is being expanded. As of this month, the new countries being added are: Belgium, Bulgaria, Channel Islands (Jersey & Guernsey), Croatia, Cyprus, Czech Republic, Estonia, Germany, Gibraltar, Greece, Hungary, Iceland, Isle of Man, Latvia, Liechtenstein, Lithuania, Luxembourg, Malta, Netherlands, Poland, Portugal, Romania, Slovenia and Slovakia.

This summer, I spent time in Denmark, Germany, Holland, Jersey, Ireland, Spain and the United States and and had my phone with me at all times. Germany and Jersey were not in Feel at Home zones at the time, so I switched data roaming off, but used it in the other countries as I would normally.

I was delighted to receive this text from Three earlier on today: 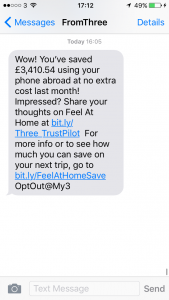 Apparently I have saved £3,410.54 by being on Three when using my phone abroad. That is a ridiculous amount – more than the cost of the whole holiday! But it is also a massively skewed figure; of course, if I did not have the free access to the data that I do, I would not have been on 3G throughout my holiday. Even so, there is something to be said for not having to think about about using my phone when abroad and I think that Three offer the best programme for this.