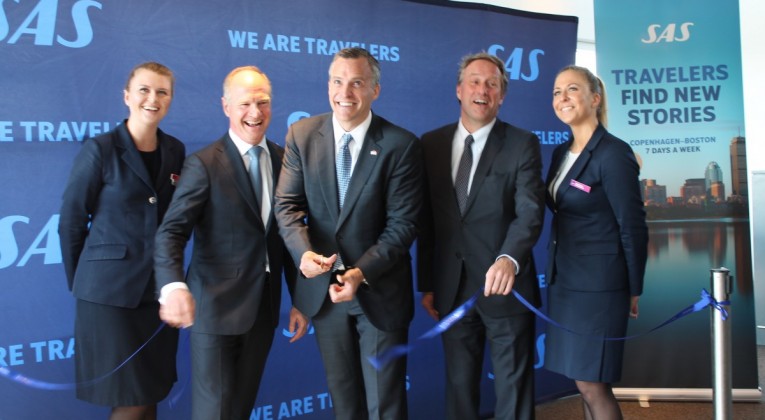 SAS currently has a strong focus on their long-haul route network. Only a few weeks ago they celebrated the opening of the route from Stockholm to Los Angeles – and in September the route to Hong Kong opened. On 29 March, InsideFlyer was at the “premiere” of the new SAS route from Copenhagen to Boston, which will be flown daily with a specially equipped Boeing 737 from PrivatAir.

US Ambassador Inaugurated The Route

Although the route originally was started because SAS was tied to a lease of the PrivatAir aircraft (after the failed Business Class-only route from Stavanger to Houston), the new route opening is still a very good reason to celebrate.

And it was quite the celebration, with speeches from SAS manager Lars Sandahl Sørensen, CEO of Copenhagen Airports Thomas Woldbye and even the US ambassador to Denmark, Rufus Gifford.

Ambassador Gifford had an extra reason to welcome the opening of the route as it connects his work in Copenhagen to his hometown Boston.

Specially Equipped Aircraft On The Route

The aircraft to be used on the route is a specially equipped Boeing 737, which will have both business class and economy class seats on board. The popular Plus class will not exist on this plane. While SAS’s other non-scheduled flights have new and extremely comfortable booths installed, this plane has a slightly different layout with older Business Class chairs. Consequently, there are no entertainment systems on board, but passengers will be handed out iPads in both business class and economy class.

The plane has previously been used on – the now defunct – route between Stavanger and Houston, and during the winter evening departures to New York from Copenhagen. Up to Christmas the aircraft only had Business Class seats installed, but has now been rebuilt, so there is both business and economy class. The cabin crew is from PrivatAir, but the service on board is the familiar SAS standard.

The SAS Painted Aircraft Is Delayed

The aircraft that was supposed to be used on this route is painted in SAS livery. But the aircraft has been delayed because of scheduled maintenance. This means that initially an aircraft in PrivatAir livery (and slightly different interior) will be used. This aircraft has a total of 92 seats, but the plane that later takes over the route has 86 seats – split into 20 business class seats and 66 economy seats.

9 Destinations In The US

New SAS Route Is The First Direct Connection To Boston

SAS is also the first airline that offers a direct connection between Scandinavia and Boston, but them being the only ones on the route will not be lasting long. In just a few weeks Norwegian also opens its route between Copenhagen and Boston. This will only fly once a week, so how interesting this will be for business travellers is to be seen. SAS flies the route 7 days a week.

10th Destination On The Way Later This Year

Later this year, SAS will celebrate the opening of other long route flights. In September they’ll open the routes from Copenhagen and Oslo to Miami. This route will be flown with SAS’ own equipment, which is the larger Airbus A330 and A340.

InsideFlyer was attending the opening of the new SAS route at Copenhagen Airport, which included speeches, canapés and champagne for passengers at the gate.

This article was first published on Insideflyer.dk on march 29 by Flemming Poulsen.

Amy is a native Dutchie and grew up following her parents on their extensive travels around Europe, leaving almost no country untraveled on this side of the ocean. Coming from the quiet rural south of the country she now lives in Amsterdam, where she still discovers new places and people to connect with every day. She can't survive a day without laughter and good conversation, and is passionate about.. well.. everything! Her credo: focus on the journey, not the destination.