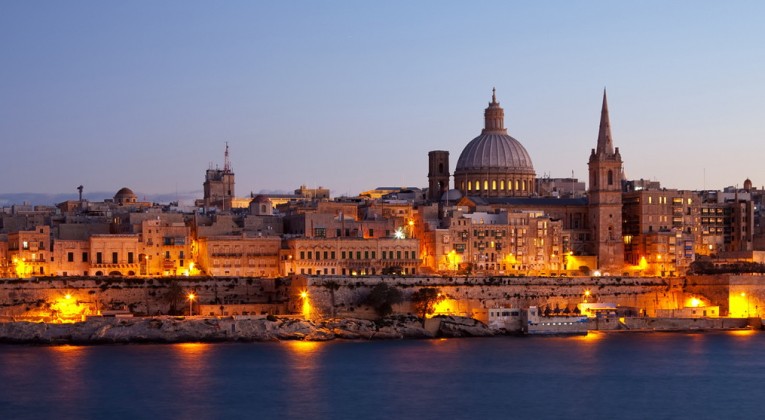 A very warm welcome to InsideFlyer UK’s “10 Reasons to Visit Malta”, a country widely regarded as one of the Mediterranean’s gems, and a great “Winter sun” option from the UK. We have opted for the summary, “top 10” approach on the basis that there’s already a million detailed travel guides out there. We hope that it will help to highlight the highlights, and have also included links to relevant websites at the end, should you wish to look further. Malta is renowned for its pleasant climate. Summer is hot and ideal for sun worshippers, but skirt its edges and you can enjoy hot sunny days without roasting. Even deepest winter remains mild, with cooler days averaging around 15C/59F, but still 5-6 hours of sunshine, and the occasional glorious day thrown in.

Clearly, when you visit will depend on your preference, but September and October are highly recommended, giving you the benefits of the (tolerably) sunny weather without the crowds or the peak prices. Valletta is Malta’s capital and a World Heritage site. It has been variously described as an “open-air museum” and the “world’s most historic city”. It was built by the governing Knights of St John, following their success in the Great Siege of 1565, and is a spectacular preservation of five centuries of history.

It’s not merely the past that should draw you to Valletta, however. As well as its historical charms, the present city is full of high quality restaurants, bars (including the infamous pub in which Oliver Reed had his last drink while filming Gladiator) and cafes.  Your highlight will depend on your particular preference, but it may be something as simple as a drink at a harbour view bar, or a stroll along the ancient bastions. One of Valletta’s key charms is just soaking it up. However, the majestic St John’s Co- Cathedral will take some beating, complete with its selection of priceless paintings (including The Beheading of St John the Baptist, by Caravaggio). Malta’s strategic position between Europe, North Africa and the Middle East has led to it being of huge significance to a succession of occupiers, including the Phoenicians, the Aragonese, the Knights of St John, the French and (of course) the British.

Unsurprisingly, it has also played a crucial role in some great historical struggles, including the battles between Christian Europe and the Ottoman Empire, the rise and fall of Napoleon and of course the Second World War.

But it’s not just history book stuff: the island continues to display the signs of this imposing past, and the influence of years of cultural diversity, almost everywhere you look. You only need to go for a walk through Mdina, the Three Cities or Valletta to be surrounded by ancient streets, churches, fortifications and battle grounds.

Few know, for example, that Fort St Angelo, at the tip of the town of Birgu and the main focus of the Great Siege of 1565, remains effectively an independent country, belonging to the Sovereign Military Order of Malta – the fully sovereign State governed by the modern day Knights of St John (who are still governed by a Grand Master, and have an ongoing claim to sovereignty over Malta). Europe is not always cheap, but if you want the best bang for your buck, you can do a lot worse than Malta. I remain amazed by the number of times I have bought a round of beers and received change from a €10 note… and that’s not just down to my limited circle of friends.

Of course, the value is not just in the alcohol (as good a place to start as that may be). Dining out and hotels are also very competitive when compared to Europe generally. Not least because of the low cost of high quality wine, two people can eat and drink at a high-end restaurant in Malta for well under €100.

Unsurprisingly, prices do vary to a degree by season, particularly with hotel stays. However even at peak prices you won’t pay through the nose, and visit in the off-season (late September to May) and you can grab a real bargain. Malta is a tiny Mediterranean island, so if you like your sea accessible, warm and blue, it is an excellent option. In the summer, the sea reaches bath-like temperatures and you can swim either from the rocks of the southern towns, or the beaches of the north and south.

In winter, the brave still swim, but the sensible take boat trips: you can catch the scenic ferry from Sliema to Valletta or take a harbour cruise. There are even a number of deep sea fishing options: the Mediterranean gets very deep, very quickly, off Malta, so you don’t have to go far. Walking around this spectacular fortress town is an unparalleled experience, very much like visiting a medieval film set. The difference is Mdina is a living, breathing city full of stunning architecture, ancient churches and breath-taking views of the surrounding countryside. It also contains some of Malta’s finest restaurants.

Mdina must also be visited at night, when it is much quieter, free of the tourist throngs, and the lamps gently light up the ancient narrow passages that make up its side streets. Dine in style at one of the many restaurants, then get lost in its maze of alleys. If you’re compiling a list of things to do in Malta, Mdina must be on it, but you would be amazed at how many tourists don’t make it here. Malta offers some of the world’s finest diving and snorkelling, and has a series of awards to back this up.

Dive sites include an inland sea, caves, wrecks, reefs teeming with sea life, drop-offs with amazing visibility and, mercifully, warm water. The wreck dives include the HMS Maori, which is famed for its role in sinking the German battleship Bismarck in 1941.

For those seeking something simpler, there are plenty of good quality snorkelling options just off some of the main tourist spots, including the rocks of Sliema and St Julians.

Malta is host to five temples listed as UNESCO World Heritage Sites, including the oldest known freestanding temples in the world, at Ggantija.

The Ħal Saflieni Hypogeum is an underground prehistoric burial site dating back to 4000 BC. It is made up of a number of interconnecting rock-cut chambers, set over three levels. Although impressive in itself, it also contains an extensive amount of well-preserved, prehistoric art.

A 6000 year old art display is not an everyday experience, and a visit is highly recommended – although be sure to book in advance. We have already touched on the value of Maltese cuisine above, but these prices do not lead to a compromise on quality. As one would expect from a Mediterranean destination, the seafood is generally excellent, with much of it freshly sourced from the fish markets of the Southern town of Marsaxlokk (worth a visit, incidentally).

For a truly local flavour, you can try the pastizzi – a pea or ricotta pastry. It’s not to everyone’s taste, nor for the overly health-conscious, but is available throughout the island for just a few cents. Indeed, baking is something of a national speciality – local bread is delicious, and a fresh crusty loaf, thickly sliced, will invariably be served as an appetiser.

Local wine is often very good. Try it, but the proximity to the rest of Southern Europe means you will be spoilt for choice should you like something a touch more mainstream.

As with anywhere, it is well worth doing your research before dining in Malta, but eat at the right places and you are unlikely to be disappointed. The St Julians and Paceville area is the obvious first place to mention here. If you are looking for some heavy duty nightlife, then Paceville will offer you everything you could possibly want at remarkably reasonable prices (not that you’ll be in much of a position to count, at 5am). Bugibba offers similar options, especially during the summer. While not quite 24 hour, 365 days a year, the Malta party scene is not far off.

However, there are certainly alternatives, and a fulfilling night out here should not be seen as simply loud music and sambuca shots. There are some very classy establishments offering late night eating and drinking in the rapidly gentrifying Valletta, while an evening meal and stroll around Mdina is likely to be a trip highlight.

…And not forgetting Gozo Given that Gozo technically forms part of the country of Malta, it would be remiss to not make a passing reference to it in a top 10 assessment, as it really is a highlight.

Beautiful beaches, countryside and a very laid back feel all contribute to this little gem of an island, which is well worth at least a couple of days of any Malta trip.

Getting there from the UK:

The Religion, a book by Tim Willocks

The Sword and the Scimitar, a book by David Ball

UK-based Tom Sumner is our main editor, and a veteran of the travel and miles and points world. Tom loves a hotel or flight bargain, and his armoury of tricks and tips - and desire to share them with others - has led to him blogging extensively on the subject.