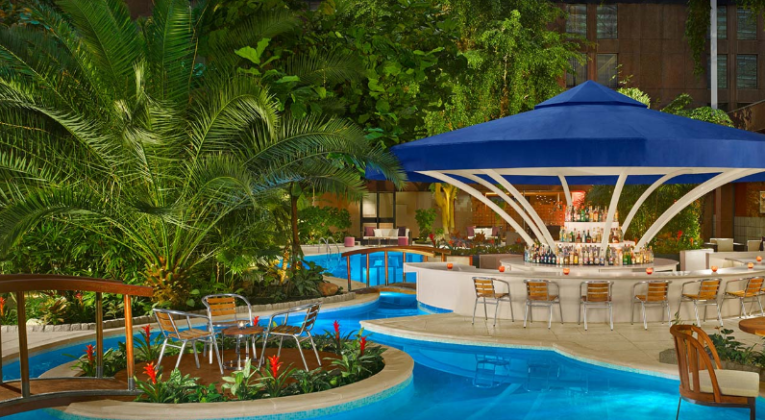 Have you ever wondered what the best hotel options are (whether using cash or Points) for the main UK airports? I certainly have, so decided to take a more systematic look at the options for each airport –  today focusing on the best SPG hotel for London Heathrow Airport.

I’ve already examined the best Hilton Honors and the best Marriott Rewards options for Heathrow and will continue to look at the offerings there from the other major chains, before moving onto other airports.

As always, if I’ve missed something or if you think I’m just plain wrong(!), please let me know in the comments or join in the chat on the forum.

There are just two Starwood hotels in the immediate vicinity, so deciding the best SPG hotel for London Heathrow Airport shouldn’t be too taxing…

The Sheraton Skyline is physically very close to Heathrow Airport, located on the Bath Road. Getting to Terminals 2 + 3 is easy by (free) public bus and takes 15-20 minutes. You can get to Terminal 4 by bus in 35 minutes and Terminal 5 in about 20 minutes. Taxis are overpriced but quick, if you’re in a rush.

The Sheraton Skyline is a pretty comfortable place to stay, with a Club Lounge and swimming pool. 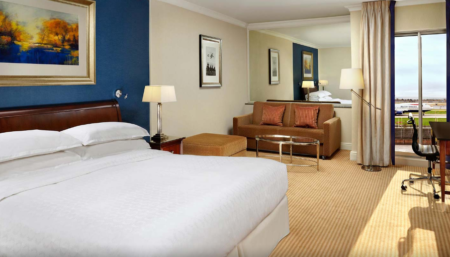 Cash rates vary from ~£79 to ~£200, with Fridays, Saturday and Sundays usually being cheaper than the rest of the week.

As a Category 3 hotel, the Sheraton Skyline requires 7,000 Starpoints per night. I value Starpoints at about 2p each, so wouldn’t be tempted to redeem Points unless cash rates were in excess of £140.

The Sheraton Heathrow Hotel is widely regarded as the lesser of the two SPG Heathrow Airport hotels, but that isn’t to say you should rule it out. As you can see in the picture below, the rooms have been refurbished recently and reviews seem to be improving. Facilities are more limited that at the Skyline, with no swimming pool.

As regards location, the Sheraton Heathrow is actually nearer Terminal 5 than the Skyline and a similar distance to Terminals 2, 3 and 4. The bus stop is a few minutes walk though. 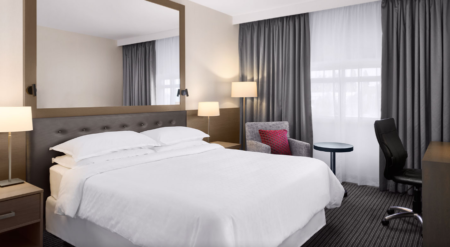 Cash rates tend to fluctuate between £71 and ~£140, with weekends generally being cheaper.

In my view, the best SPG hotel for London Heathrow Airport depends very much on the rate for the particular night you’re staying, if using cash. I like hotels to have a pool, so would be willing to pay a small premium to stay at the Skyline – but not much more. Cash rates at the Skyline are frequently substantially higher than at the Sheraton Heathrow.

If you want to use Starpoints instead of cash, the Skyline is the obvious choice though, given both hotels cost 7,000 per night.