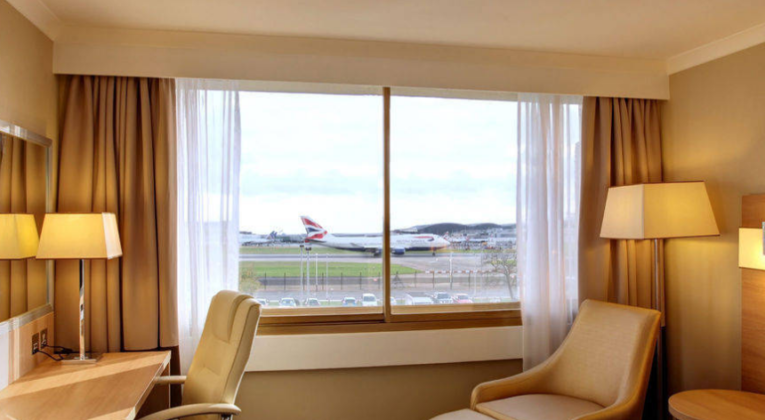 Have you ever wondered what the best hotel options are (whether using cash or Points) for the main UK airports? I certainly have, so decided to take a more systematic look at the options for each airport –  today focusing on the best Marriott hotel for London Heathrow Airport.

I’ve already examined the best Hilton hotel options for Heathrow and will continue to look at the offerings there from the other major chains, before moving onto other airports.

As always, if I’ve missed something or if you think I’m just plain wrong(!), please let me know in the comments or join in the chat on the forum.

Compared to some of the other hotel chains, Marriott options are fairly limited, so deciding the best Marriott hotel for London Heathrow Airport shouldn’t be too tricky…in theory anyway!

Although physically very close to the airport (indeed some rooms overlook one of the runways as you can see below!), the Marriott Renaissance isn’t attached to Heathrow, but located on the Bath Road. Getting to Terminals 2-3 takes 10-15 minutes on the free local buses, Terminal 4 should take about 30 minutes, and Terminal 5 circa 20 minutes.

Cash rates are usually somewhere between £72-£144, with weekends tending to be cheaper than weekdays.

If you would rather use Marriott Rewards Points, you’re looking at 25,000 Points per night. I give Marriott Points a relatively high valuation of roughly 0.7p each, so wouldn’t be tempted to use Points unless cash rates were £175+. The Renaissance Heathrow could be a decent use of a Category 1-5 Certificate though – find out how to earn one for just 2 paid nights at Marriott hotels here.

The London Heathrow Marriott is about a mile further down the Bath Road than the Renaissance. Timings to all the Terminals are very similar to those mentioned above – just add on a few minutes.

This is almost certainly the nicest Marriott option, with modern rooms and good facilities, including a swimming pool and executive lounge.

Cash rates vary between £90 – £224, with weekends again usually being cheaper than weekdays.

The standard Points rate is 35,000 Marriott Rewards Points per night (though the hotel is sometimes on PointSavers so can be ‘just’ 30,000). Given my valuation of Marriott Points, I wouldn’t be looking to redeem unless cash rates were £245+.

Despite the name, this hotel isn’t very near to either Heathrow Airport or Windsor. Getting to Terminal 5 isn’t so bad as it’s only about 4.5 miles and you can get the H55 Hotel Hoppa, though I would still allow at least 30 minutes. Getting to the other Terminals is pretty inconvenient and I wouldn’t really recommend it.

There is a swimming pool and an executive lounge.

Cash rates are generally between £67-£140, with weekends having the cheapest rates.

If you can get a decent cash rate and are heading to Terminal 5, it’s not a bad choice. For anything else, I would look elsewhere.

It’s also worth quickly mentioning that if you want to stay in central London and make your way to the airport from there (Heathrow Express, tube, taxi, etc), Marriott offers some superb options for redeeming Points.

The Marriott Grosvenor Square, Marriott Park Lane, JW Marriott Grosvenor House and Marriott County Hall, are all genuinely luxurious options and are all available for 45,000 Marriott Rewards Points. Cash rates are frequently £350-£400+. Most of the time, one of these four hotels would be my personal preference if using Marriott Points.

In my view, the best Marriott hotel for London Heathrow Airport overall is the Renaissance. It’s slightly closer to the airport and considerably cheaper (whether using cash or Points) than the Heathrow Marriott – plus you might get a room with runway views!

There’s no denying that the Heathrow Marriott is a bit more luxurious though, and I do like a hotel to have a swimming pool, so if the rate was only a little higher it’s certainly still worth considering.

The Heathrow/Windsor Marriott is too far out for an airport hotel, for me anyway.