As COVID-19 hit, like so many of us, I went from constantly flying to no flying. I longed to be back in the air, to be going somewhere again. Recently I had to go to Switzerland for my first bit of work since March (side note, if your company wants some amazing mind-reading socially distanced or via Zoom then get in touch!). So, I found myself flying with BA from London Heathrow to Zurich.

This piece is going to focus on everything up to getting on the plane, so if it’s the in-the-sky part of the tale that you’re interested in, then you’ll have to check back tomorrow.

Arriving via a car service at 2pm for a 4.05pm flight on a Sunday, I was arriving much earlier than I’d have done in pre-Covid times.

I had planned to get there this early to be able to experience the lounge and scout round the terminal a little more. However on getting into T5 I realised that I’d be spending most of that time waiting in line. There were lines snaking around the bag drop areas, the First Wing had about 20 people in line waiting to get in, but I headed to the Club World check in taking advantage of my BA Silver status. It, like the rest of the airport, was incredibly busy with the line going beyond the roped barriers out into the terminal.

It took me 10 minutes to reach what would normally be the start of the line. Then I waited 50 minutes to be able to drop my bags. Having not gone anywhere and not seen many people for months, it was a stressful 50 minutes where social distancing was impossible. People were trying their best to keep their distance but it was just too busy. Even if you could keep two metres from the person in front and behind you, you inevitably would end up shoulder to shoulder with the person on the other side of the switch-back line. 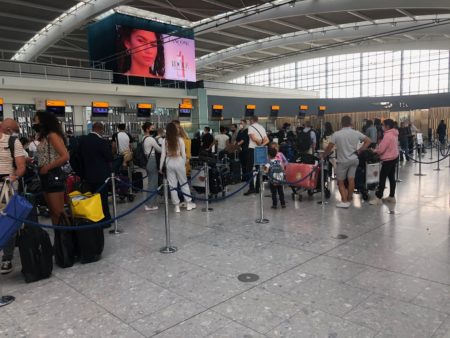 To make matters worse, there were only 7 of the check in desks open. It was clear that BA were operating low staff numbers, which seems ludicrous based on the number of people trying to check in throughout the airport. Surely they had a clear indication of loads and should have staffed accordingly?

Despite the rules being that a face mask must be worn in the airport, there was a handful of people with their masks under their chins, or their noses sticking out from over them, and one member of BA staff manning the line who regularly would take their mask off. Of course some people have medical reasons not to wear a mask, but all those who had their masks under their chins placed their masks back on by the time they reached the front of the line and no airport or BA staff thought to ask them whilst in line to put their mask on.

Continuing to make the wait longer, there were regular shouts from staff for people on flights departing within an hour, or within 45 mins. When they found someone, they let that person push through the line, again making social distancing impossible and took them to the front. The initial experience was clearly far from perfect and not one to instil any confidence in anyone.

Security thankfully was fairly brief. The fast track lines were closed but it was fully staffed and I was through within 10 minutes and heading to the BA lounge.

Walking through the departure lounge, other than a few closed shops and restaurants, it seemed like business as usual. The place was busy (although not rammed), lots of seats were closed off to help with social distancing and mask compliance was strong. I made my way to the BA Galleries South Lounge and took the escalators up to the top floor. Then for the first time ever I encountered a line to get in the lounge. With so many people waiting to get in, and so little space, social distancing was once again impossible. The entry scanning machine was roped off and there was one person at the front checking everyone’s boarding cards. I don’t quite know why it took so long to get everyone in – I waited around 8 minutes to find that the lounge wasn’t full and there were plenty of places to sit and social distance.

My lounge experience was very pleasant overall. It was easy to locate the lounge wifi password plus the password of the day, which you need to order food from the online menu. Once you’re seated, you scan a QR code to access an online menu where you can order food and drink to be served directly to you. I went for the Afternoon Tea, Chilli, some water and a can of coke. Within 5 minutes my drinks arrived and a few minutes later my food too.

The afternoon tea was without the usual scone, jam and cream, but the carrot cake slice was rather tasty. I ordered some more water and soft drinks to take with me for the flight. The soft drinks arrive in their normal cans and the water came in a glass which I decanted into my travel bottle. On doing this the member of staff told me there were bottles of water in the middle of the lounge by the exit that I was welcome to take with me.  It was also great to see bottles of Brew Dog hand sanitiser around the lounge which you could use or take with you.

On the negative side, there was no real snack menu available, so I missed being able to  grab a bag or two of crisps. The food arrived without cutlery which was annoying, especially as by the time I discovered it, it was hard to flag anyone down to help. Also I watched many members of staff deliver food to the wrong places, including trying to deliver food to me on a few occasions because they hadn’t got to grips with the table numbering system.

Priority boarding is no longer a thing, with boarding now supposed to be from the back of the plane to the front in groups of 5 rows. However after the first boarding announcement was made, the PA system started having a problem so they decided just to let everyone board at once – probably a wise decision since we were nudging close and closer to the departure time.

For what happened on board and at arrivals, check out the next instalment tomorrow.