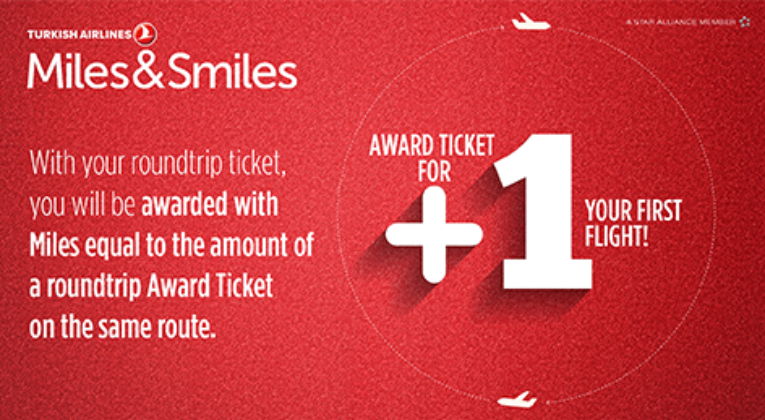 Turkish Airlines has a potentially very lucrative offer on at the moment, that could earn you up to 105,000 ‘Miles & Smiles’ Miles for just one paid Return flight.

The basic idea is that you will earn, as a bonus, the same number of Miles you would need in order to book the same route (in Economy) as an award ticket.

So, say you booked a Return flight from London to Istanbul using cash, you would get 20,000 bonus Miles because that’s how many Miles you would need to book a Return Economy award ticket.

Flights have to be Return, start outside Turkey and be completed by 27th December.

You can check out the full ‘Miles & Smiles’ award chart here to calculate what your bonus earnings would be. The UK is in ‘Europe 2’ so you would earn 60,000 bonus Miles flying via Istanbul to anywhere in the ‘North America’ or ‘Far East’ regions, for example.

The only thing that I’m a bit concerned about (aside from the political situation) is that I can’t see a way to ‘opt in’ to the offer – hopefully that means it’s automatic, but that would seem an unnecessarily expensive way for them to run a promotion like this.

The terms (below) aren’t terribly helpful either, so if you’re thinking about booking something because of this promotion, I would double check with Miles & Smiles (Twitter and Facebook are normally good if you need a quick answer) that you will definitely get the Miles for your particular flights before booking.

This could be a genuinely fantastic offer, and if you’re flying with Turkish Airlines anyway, is definitely something you should take advantage of. I wouldn’t go out of my way to book with Turkish though without getting direct confirmation that my flight would be eligible for the promotion because the the terms are a bit too vague for my taste.