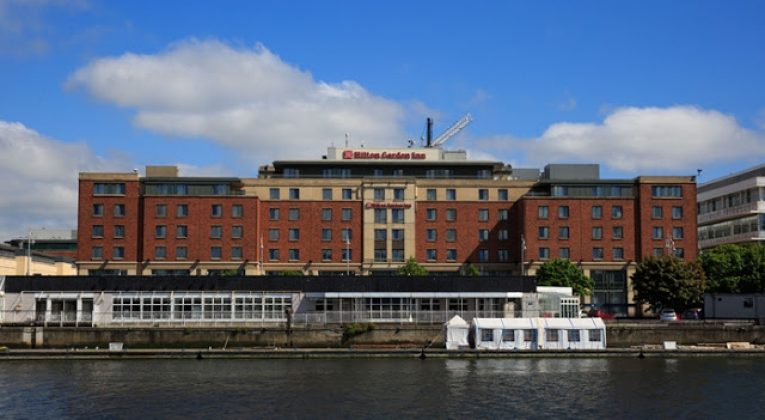 Don’t be too surprised if you haven’t heard of the Hilton Garden Inn Dublin before.  It’s only been in the Hilton portfolio for a few weeks, having previously been a Jury’s hotel.  It was closed for many months whilst a re-fit was undertaken.  That was only stage one of the refit.  The next stage includes the installation of centralised air-conditioning (more on that later), and an extension to provide more rooms.

I had a concert in the Three Arena, and so I thought I’d give it a go….

The hotel has an arrangement with a connecting public car park, offering 24hrs of parking for €16.  It’s worth noting that the website doesn’t detail the location of the car park.  We actually journeyed into Dublin by bus, so arrived at the hotel after a easy 5 min walk.  The foyer has a nice up-market feel, is spacious and well lit.  Our reservation was quickly found by the check-in staff, noting that I’d checked in online. We were given vouchers for breakfast (my Diamond benefit).

The standard redemption here is a queen room. When online check-in opened the day before, I was offered a King room on a lower floor. At that stage I declined. On the morning of our arrival, on line checkin offered a selection of  king rooms with riverview on the 5th floor (there are only 6 floors). I knew this was the best room option in the hotel, and so selected one of these.  So it wasn’t a surprise to me that this was the room that was waiting for me. 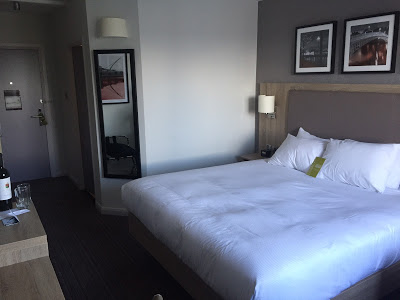 The hallway and room had that “new” smell. It was clear that the room, like every other part of the hotel I saw, was a brand new fit from top to bottom, including contactless door locking.  The room was well appointed, with tea making facilities, an empty fridge, and a great comfortable King bed.  The bathroom was a bit “compact”, with an over-the-bath shower.  The shower head was attached to the wall at a fixed height, which invariably means it’s too high for short people, and too low for tall people !

It’s worth noting that currently there is no air-conditioning in the bedrooms.  There is a tabletop fan in the room, and the window does open, but at just 5 floors up, the noise from the traffic is very apparent.  It was only 15c outside the night we stayed, but still the room was quite stuffy and warm during the night.  The fan was a mixed bag, it did provide airflow, but was quite noisy. Also of note is that there wasn’t any bottled water in the room.

We went down and had a pre-concert drink.  I was advised that although food service normally stops at 10pm, on a concert night, they serve pizzas right up to midnight, and also the bar is open 7 days a week til 1:30am. 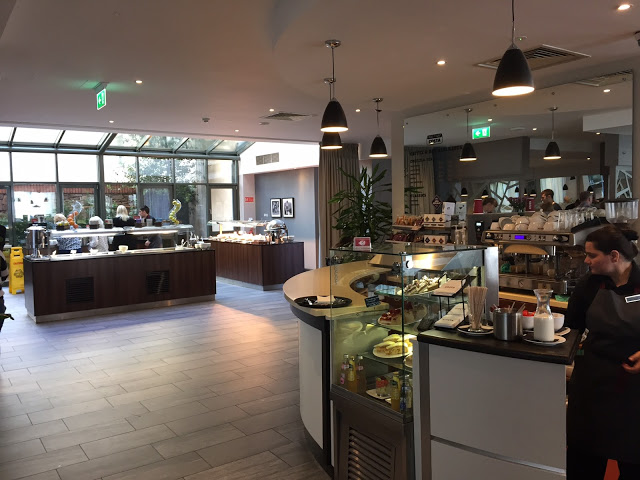 Breakfast is served is the same general area as the bar.  There was a great selection of usual buffet style fare.  There was an egg station ( which is standard for Hilton Garden Inn) with a chef ready to do eggs/omelettes to your liking, and also a waffle making station.  Tea/coffee was either do it youself, or you have something freshly made by the barista (front of the above picture).

Having said the food was in the bar area, there was also an open plan, but semi-enclosed area, into which we were invited to eat our breakfast.  I’m unsure if this was because we are diamonds, or if that had nothing to do with it.

On check-out I spoke to the senior guy on the desk about the air-conditioning situation.  He advised that air-conditioning is definitely in the next phase of the re-fit, and suggested it’ll be operational should we be back next year.  Strangely, I couldn’t see in our brand new room where centralised AC could be ducted.  If you are re-doing a room with the plan to fit AC, you’d imagine it would be stupid not to have the preparatory work already done, and just block off the duct.  He also apologised for us not being presented with bottled water as part of the check-in process.

For a Dublin concert, The Morrision Doubletree has previously been my normal go-to Hilton hotel.  It’s 25 mins further up the north bank of the Liffey, making it about 40 mins walk to the venue. It’s in a better location for accessing the Temple Bar area.  However the standard redemption there is 60K a night, 20K more than the Garden Inn. There are other Hiltons in Dublin with redemptions starting at 30K, but in my opinon their locations are nowhere near as prime as the Doubletree and the Garden Inn.

We really enjoyed our stay at the Hilton Garden Inn. It’s location for us was as good as you could have.  The breakfast was great, the public areas excellent, and the room, lack of A/C aside, was absolutely fine.