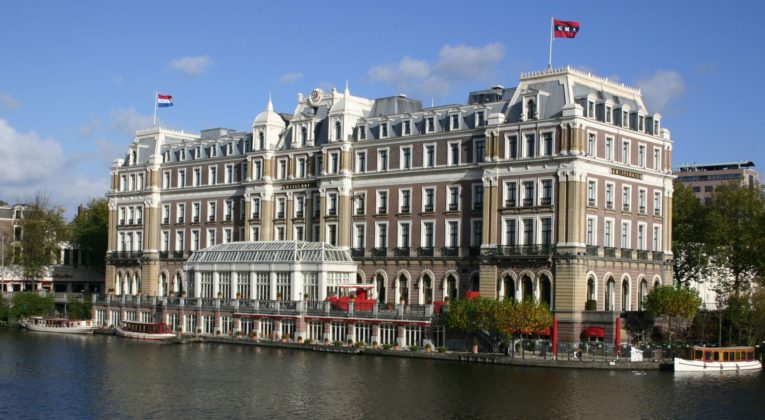 Earlier this week, IHG Rewards officially confirmed that its new (rather odd) reward night pricing model is working as intended.

These are very significant changes and require us to take a fresh look at what IHG Points are actually worth now. Assigning a value might sound simple enough, but because of the quirks of the new pricing system, it’s less obvious than you might assume.

For context, historically, I was comfortable with a value of about 0.4p per point. I wouldn’t be happy getting less value than that and often got a bit more.

What Are IHG Reward Points Worth Now?

Having moved to a system supposedly based on ‘dynamic pricing’ linked (at least in part) to the cash rate, you might think this would be an easy question to answer. A casual look at a particular destination might even reinforce that view. For example, here’s a random date in London, and everything seems to price out at roughly 0.42 – 0.49p per point. 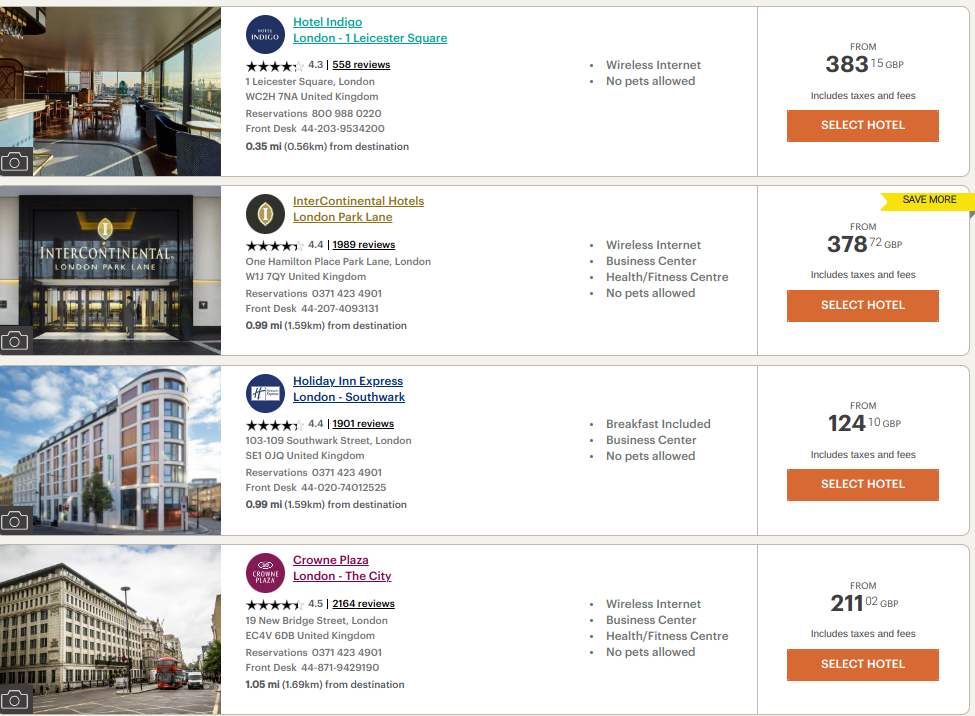 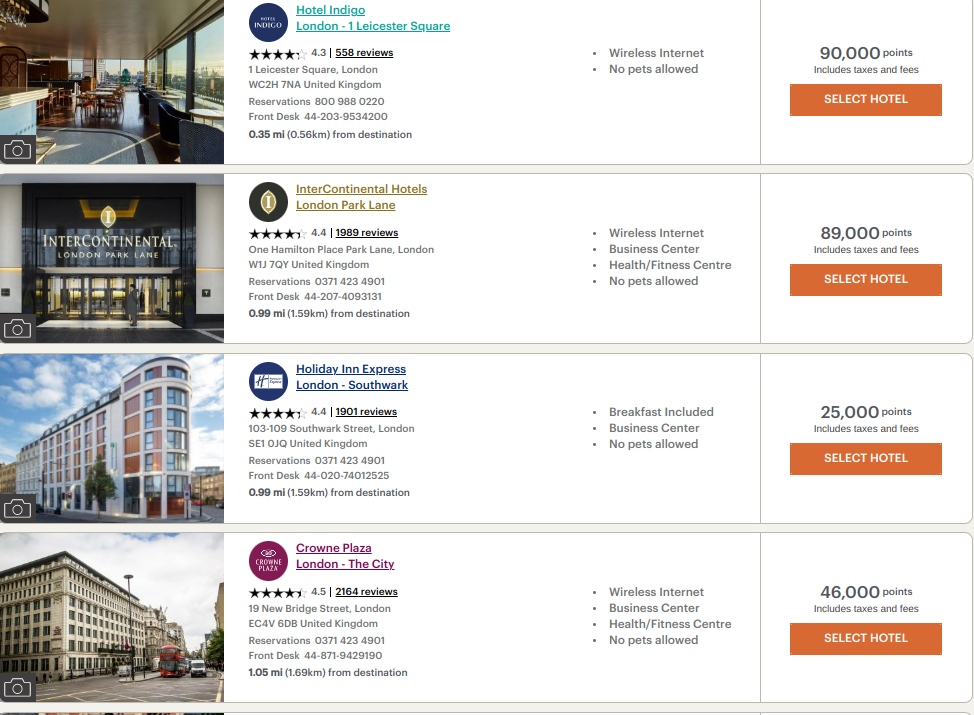 That doesn’t seem bad, and is broadly in line with my previous valuation.

However, the reality is a lot more complicated. In fact, I can discern no rational way to accurately predict what the number of points required for any particular stay will be.

Take a look at some previous examples I found trying to book a trip to York this summer:

Does a quick look at Edinburgh make things any clearer? 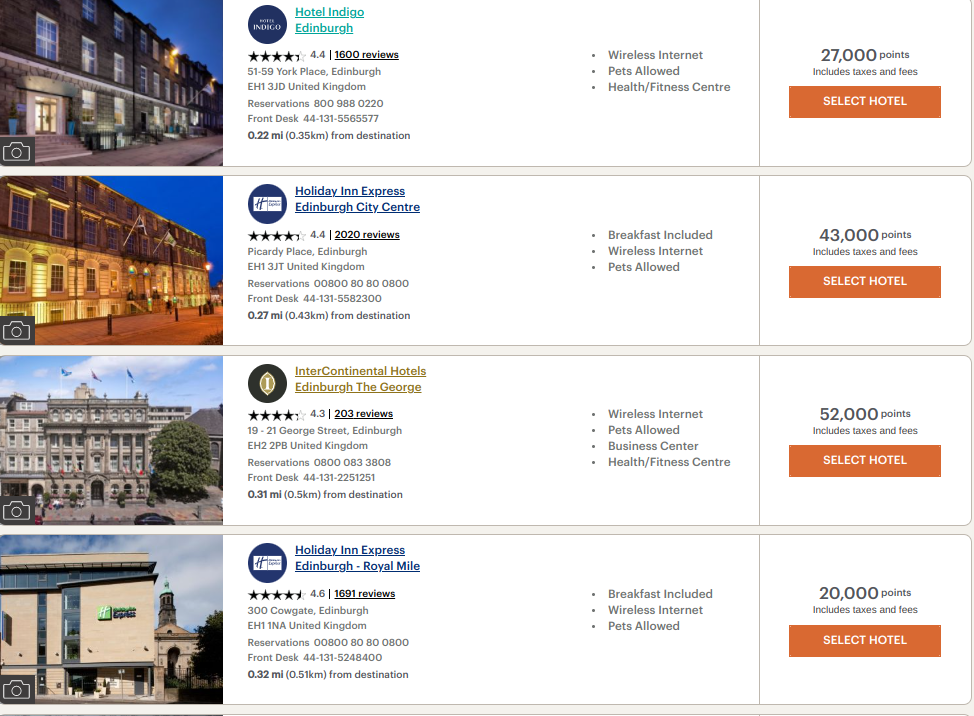 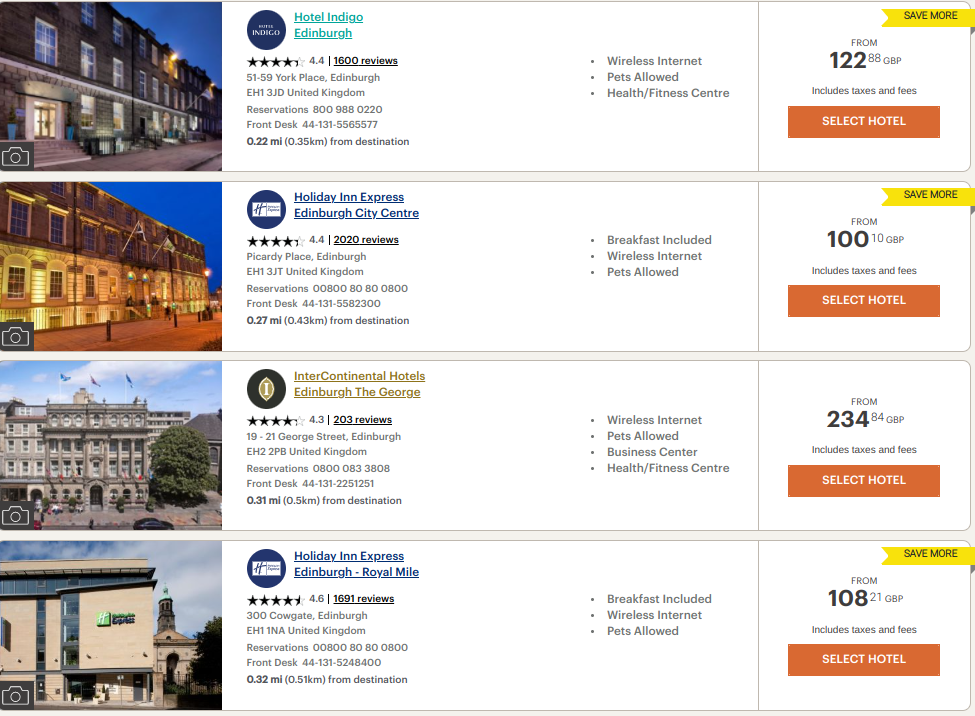 Your eyes are not deceiving you – the Holiday Inn Express City Centre requires 16,000 more points than the Hotel Indigo on that particular example date, despite being £22 cheaper if you paid cash… However you look at things, that’s clearly mad. The range  appears to be roughly between 0.23p and 0.45p per point.

Perhaps Paris, that great city of light, can illuminate things? 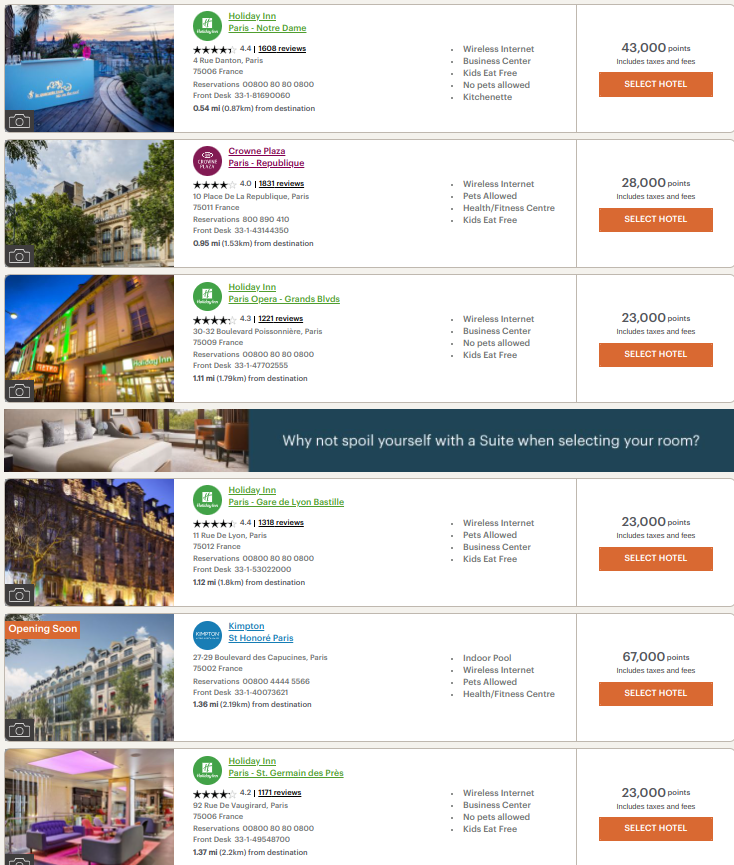 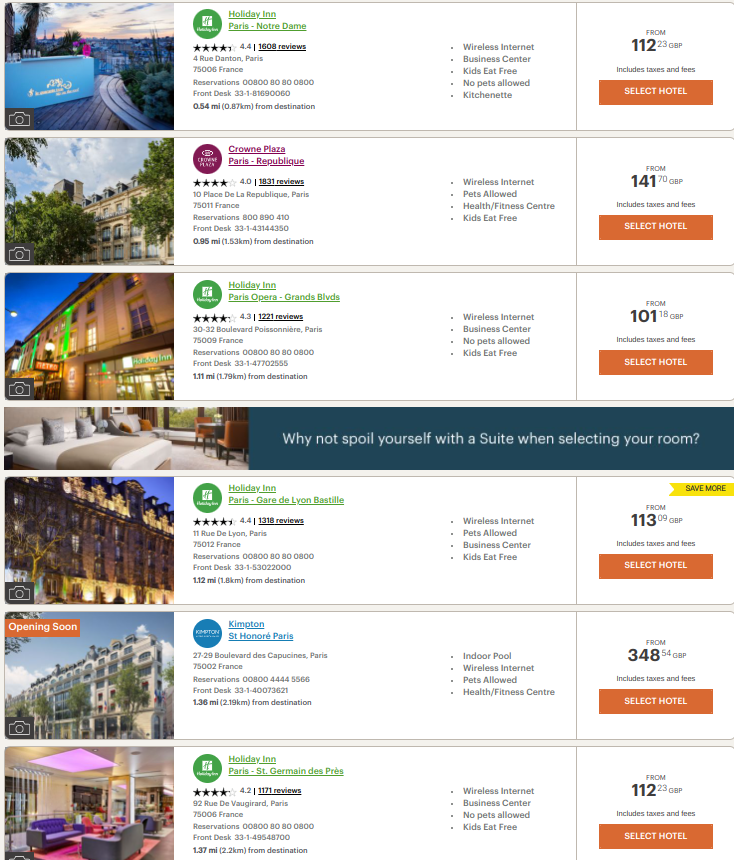 The Holiday Inn Notre Dame requires 15,000 more points than the Crown Plaza Republique, despite being £30 cheaper. 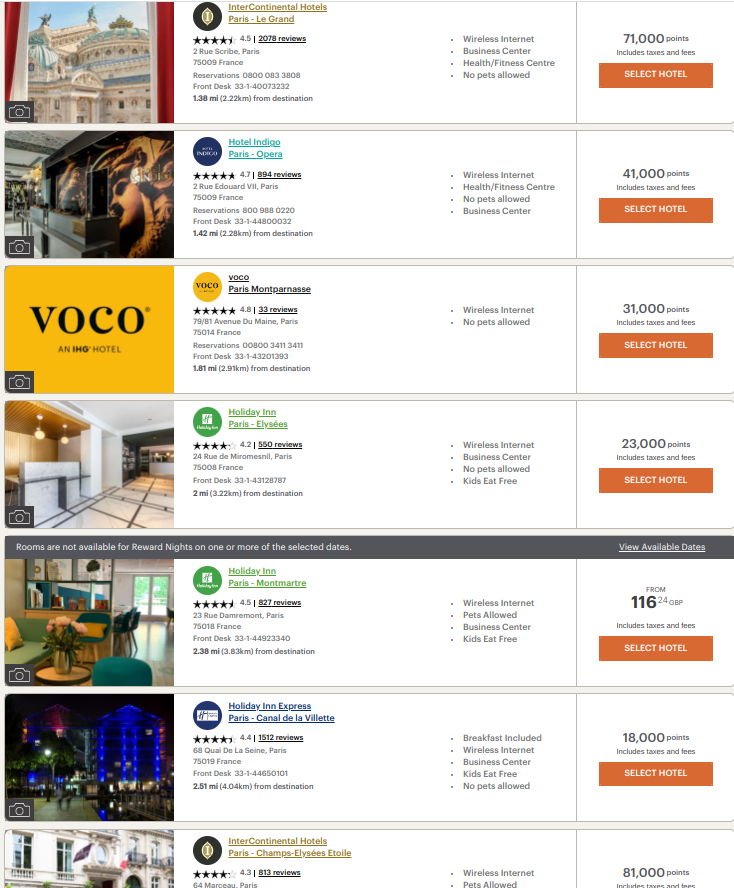 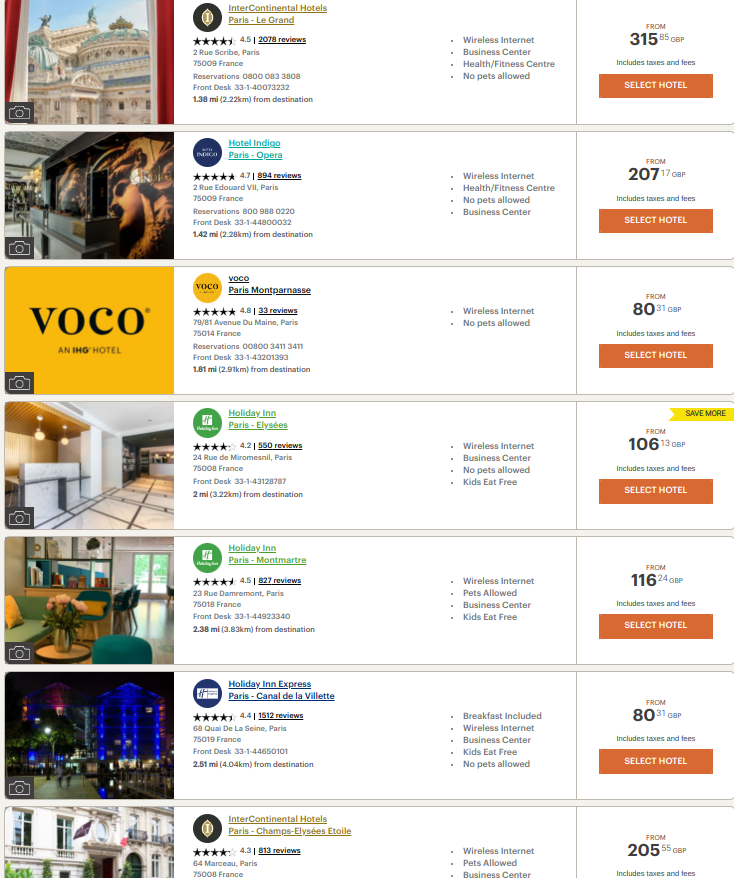 The same thing can be observed at the Intercontinental hotels in New York:

Between different hotels, there often seems to be no direct correlation between the number of points required and the cash price, the brand, the day of the week, location, or anything else I can think of. Even just looking at the same hotel on different dates can lead to wildly divergent value per point results.

However, we can still reach a conclusion of sorts.

The value range for redemptions seems to be broadly between 0.2p and 0.6p per point. What is interesting, is that in most parts of the world (at least in cities, where there are plenty of IHG options), you can usually find different properties (often even the same brand!) at opposing ends of that range.

The obvious thing to do then, is to use your points to book properties on the higher end of the value range, and to use cash when you want to book somewhere that is offering bad value for points redemptions. Or, simply book a better value non-IHG hotel.

I find the new system absolutely baffling. It makes things unnecessarily complicated for members, disincentivises them from collecting points for a specific award (as you don’t ever know how many points you will need), and doesn’t even look like it will save IHG any money.

That said, if you’re prepared to dig around and do your sums, there are still some very good value redemptions around. Predicting them is the problem…