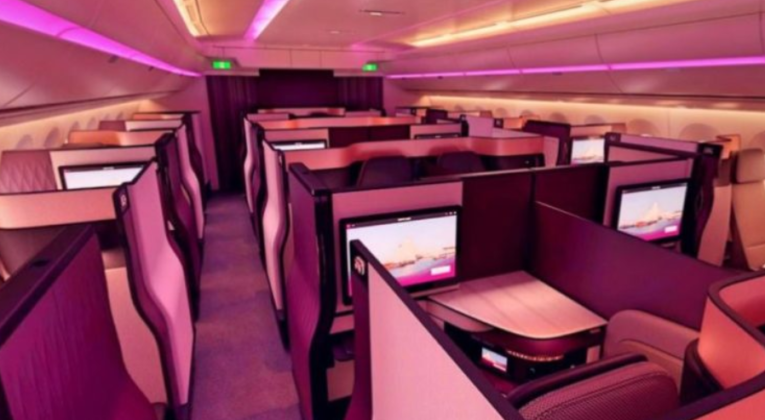 Want to fly the Qsuite yourself?

Qatar Airways has been widely praised for its innovative business class product known as the Qsuite. Both the cabin itself, service, food and drinks rate highly with frequent flyers. The Doha-based airline has received various awards for this. For example, Qatar Airways has been rated by Skytrax as one of the ten 5 star airlines worldwide, partly due to the Qsuite.

You can take a ‘virtual tour’ of the Qsuites cabin below:

Qatar does not currently offer Qsuites on all routes. On the other routes you would be flying in a “normal” business class seat, which while comfortable, is clearly not a ‘suite’ seat.

The Qsuite can be found on routes from/to Africa, Asia, Europe, the Middle East and North and South America. Below is an overview of the routes per continent.

Do note though that even on the routes listed below, not every flight will necessarily be operated by an aircraft equipped with Qsuites (check the specific flight numbers!) and that equipment swaps can still happen even at the last moment.

Qatar has excellent network coverage in North and South America. There are eleven cities that you can fly to in a Qsuite, including: Chicago (ORD), Houston (IAH), New York (JFK), Washington (IAD), Los Angeles (LAX), Dallas / Forth Worth (DFW), Atlanta (ATL), Boston (BOS) and Philadelphia (PHL). Then there is Montreal (YUL) in Canada. Finally, you can fly from/to São Paulo (GRU) in Brazil and Buenos Aires (EZE) in Argentina in the Qsuite.

There are plenty of chances to try a Qsuite to/from Asia. We have also included Australia and New Zealand in the list below:

You can go to three cities in India – Bangalore (BLR), Delhi (DEL) and Mumbai (BOM). There is also the Maldives (MLE) and Colombo (CMB) nearby.

In Thailand and Malaysia, Qatar flies to the capital cities of Bangkok (BKK) and Kuala Lumpur (KUL), as well as to Singapore (SIN).

As regards Australia, you can find Qsuites flying to Sydney (SYD), Canberra (CBR) and Adelaide (ADL) If you want to fly a little further, you can take a Qsuite to Auckland (AKL), New Zealand too.

From Doha you fly in a Qsuite to only three cities in the Middle East. That makes sense, because the distances are relatively short. The three cities are Kuwait (KWI), Muscat (MCT) and Beirut (BEY).

When you’re flying with Qatar Airways you can earn Qmiles and Qpoints in the Privilege Club loyalty programme.

What are your experiences with Qatar Airways? Have you flown in a Qsuite before? Let us know in the comments!